According to the verge,According to Jack Dorsey, the Twitter chief executive, on Wednesday, the company has banned all political ads worldwide from November 22.The changes will affect both candidate ads and distribution ads, although, among other exceptions, ads that encourage voter registration will be allowed. Dorsey said the full policy will be available to the public on November 15. 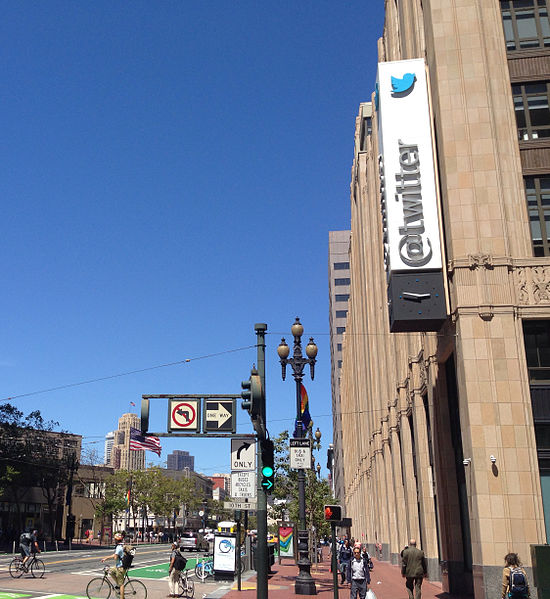 "Some may think that our actions today may be beneficial to the current leader," Dorsey said. "But we have seen a lot of social movements on a large scale without any political advertising."

Earlier this month, Biden's 2020 presidential campaign sent letters to Facebook,Twitter and YouTube, asking them to refuse false or misleading political ads. Biden's campaign has become the target of a series of ads launched by President Donald Trump for re-election, which make groundless statements about the Biden family's relationship with the Ukrainian government. 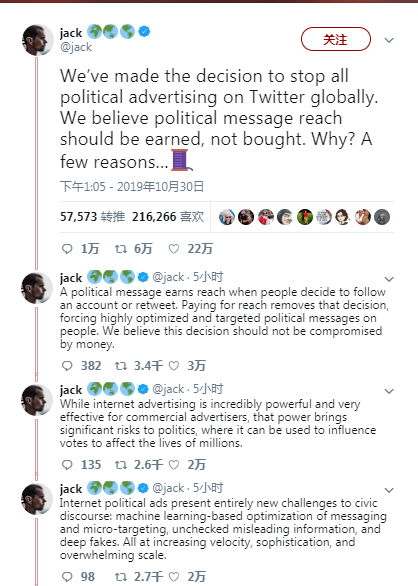 "Our approach is based on Facebook's freedom of speech, respect for the basic beliefs of the democratic process, and in mature democracies with free media, political speech is arguably the most scrutinized speech," said Katie harbath, Facebook's global head of electoral public policy, earlier this month. "So when a politician talks or makes an advertisement, we don't send it to a third-party fact checker."

Twitter has policies to stop politicians from making false statements on its platform, but it has not yet used them. Earlier this summer, twitter said it would deal with tweets from public figures like trump, which violated its rules and limited users' ability to share rules, but so far it has not implemented them on any tweets.

In Tuesday's USA Today column, Facebook's policy management directors, harbath and Nell McCarthy, wrote: "we should not be gatekeepers to the truth about candidates' advertising."

"It's not about freedom of speech." Dorsey said. "This involves paying, the cost of increasing the impact of political speech, which may have a significant impact on today's democratic infrastructure that is not prepared to respond."

We have decided to stop all political advertising on twitter around the world. We think we should win political information, not buy. Why? There are several reasons...

When people decide to focus on an account or forward, the political message wins. Paying for it can eliminate the decision, forcing people to highly optimize and target political information. We believe that this decision should not be undermined by money.

Although Internet advertising is very powerful and effective for commercial advertisers, this power brings huge risks to politics, which can be used to influence votes and millions of people's lives.

Internet political advertising has brought new challenges to citizen discourse: message transmission and micro goal optimization based on machine learning, unchecked misleading information and a large number of false information. Everything is going on at an increasing speed, complexity and overwhelming scale.

These challenges will affect all Internet communications, not just political advertising. It's best to focus on the fundamental issues without having to spend money to create additional burdens and complexity. Trying to solve both of these problems at the same time means that neither of them can be solved well, and it will damage our credibility.

For example, we dare not say: "we are trying to prevent people from spreading misleading information through our system. If someone pays us, ask them to target and force people to see their political advertisements... Okay... You can say what they want!

We consider stopping only candidates, but advertising is a way to circumvent them. What's more, it's not fair for everyone, it's the candidates buying ads for the problems they're trying to solve. So we stopped that, too.

We know very well that we are just a small part of a larger political advertising ecosystem. It may be argued that our actions today may benefit the current leaders. But we have seen a lot of social movements on a large scale without any political advertising. I believe it will only grow.

In addition, we need more forward-looking political advertising regulations (which are hard to achieve). The requirement of advertising transparency is progressive, but not enough. The Internet provides new functions that regulators need to consider to ensure a level playing field.

We will share the final policy by November 15, including some exceptions (e.g. ads that will still be allowed to support voter registration). We will implement the new policy from November 22 to provide a notice period for current advertisers before this change takes effect.

Last notes. It has nothing to do with freedom of expression. This involves paying, the price paid to increase the influence of political speech, which may have a significant impact on today's democratic infrastructure that is not prepared to respond. In order to solve this problem, it is worth a step back.