Microsoft has launched several separate versions of word, Excel, PowerPoint, outlook and OneNote applications for Android,Now it seems that Android phones will soon get a new all in one Microsoft office application. Like PC, Microsoft will release word, Excel and PowerPoint under the same office brand. 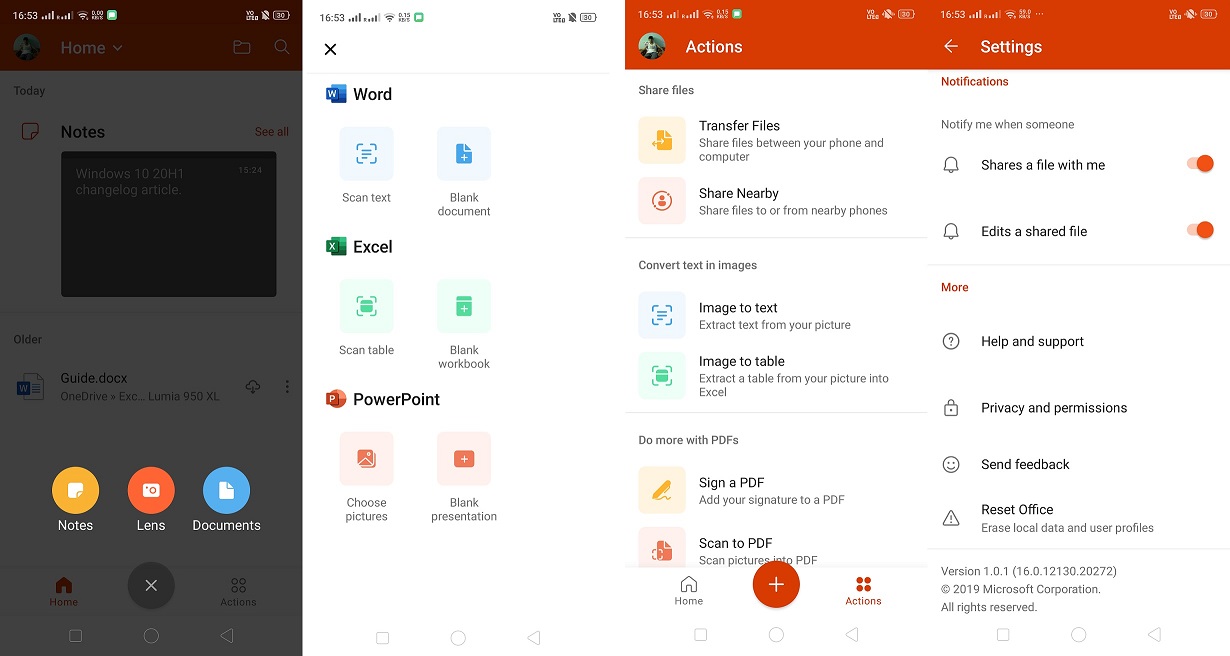 Actually,SamsungMobile phoneUnified Microsoft Office applications, including word, Excel, and PowerPoint, are preinstalled. Because we have recently found the office mobile app in Google play store, it can also be applied to other Android phones.

At the time of this writing, Microsoft has removed the download link for the all in one office mobile, but we were able to install the application on the phone.

The office application currently under test has the following main features:

Take a picture of the document and edit it with Microsoft office word.

PowerPoint can grab pictures stored in your phone for quick presentation design.

Office mobile applications also have some unique features for mobile devices, for example, you can create PDF based on photos and documents, or sign PDF with your fingers, and create or accessWindowsNotes synced with OneNote.

The application also supports nearby sharing, makes it easy to transfer files between two devices, or scans and opens files on another device using the QR code.

Microsoft is expected to announce the app at the next Ignite conference.

Related news
New office suite choice WPS Office for Mac vs. Microsoft Office 2019
New all in one Microsoft Office Mobile App suite coming soon
Office beta mobile app revealed a new logo in line with fluent design style
The end of windows 10 mobile! Office is about to stop supporting
The end of windows 10 mobile office
Office is history: New Microsoft 365 apps will replace Office
Hot news this week
Alibaba launched a new cross-border e-commerce platform in Spain, aiming to operate independently in the middle and high-end market
It's not just Huawei! Beidou has penetrated more than 20 industries and applied more than 15.5 million products
The appearance of Xiaomi's mini console is revealed for the first time: an all-metal body with a strong apple smell
Guo Ming ð «  creates: apple MR head or extended to the second half of next year, mass production shipment is less than 5
Breaking the spell of "Android 3 year must card", the new Breguet mobile phone will be sold for the first time tomorrow: from RMB3499
When pure water is used in China team to solve the problem of seawater hydrogen production: it is expected to become an original industry
Apple is recruiting neurorendering research scientists to create immersive experiences for AR/VR products
The United States, the most powerful chip designer, now has a crisis: it is shooting itself in the foot
Manufacturers like Samsung and Xiaomi have been affected. Google has revealed a dangerous flaw that threatens millions of Android devices
Be careful with your phone for a long time! The aunt played with her mobile phone so much that her fingers got stuck
The most popular news this week
Standard iP14! This is the no-miss flagship Mi 13 Series: a big upgrade compared to 12/12S
You know what? Looking at your phone while driving is the equivalent of driving blind for about 50 meters, which is extremely dangerous
The United States has approved the first fecal transplant to treat disease by transplanting someone else's feces
Amazon has withdrawn a new offer from its retail division, cutting off new employees who were due to start early next year
Apple has delayed the launch of Apple Pay in South Korea due to a local censorship clause
Dalitsu, a lens supplier for Apple's iPhone 14, reported revenue of NT $5.231 billion in November, up 20 percent from a year earlier
Apple is considering making some iPad models In India
An international first! The experiment of space culture of complete life cycle of rice was completed
Musk's brain-computer interface company Neuralink was revealed to be the subject of a US federal investigation, just four days after releasing a timetable for human trials
Microsoft said the acquisition of Activision Blizzard would help the game industry innovate