At present, GitHub has more than 40 million developers, 80% of whom are from outside the United States. There were 10 million new developers in the past year, 44% more people created the first repo in 2019 than in 2018, and 1.3 million people contributed to open source for the first time.

At present, GitHub has nearly 3 million organization accounts, which come from all over the world and represent the collective work of companies, non-profit organizations and open source projects. Among them, GitHub Enterprise Cloud accounts come from more than 70 different countries. This year, 35 of the top 50 fortune global companies have contributed to open source, which reflects that proprietary code relies heavily on the open source community.

The software community is more closely linked than ever before.

Last year, more than 44 million repos were newly created, ranging from machine learning in medicine and academic papers on deep learning to a variety of robots. On this basis, the shared infrastructure of open-source projects links all software together, and they are closely dependent.

Specifically, on average, each public and private repo on GitHub relies on more than 200 software packages, and there are hundreds of dependencies behind each project. Moreover, if you look at the top 50 open source projects by dependency, you can see that the projects with the highest dependency support more than 3.6 million other repos this year, such as rails / rails, Facebook / jet and Axios / Axios, which have become critical to global code.

Security is also part of the work of the open source community, where maintenance, developers, researchers and tool ecosystems work together to ensure code security. GitHub has fixed more than 7 million alerts since it issued a security alert in November 2017.

The use of open source code has accelerated significantly in China, India and Germany this year, with its Chinese developer fork and clone up 48 percent from last year.

In addition to open source, the contribution data of the whole GitHub is also increasing. In terms of public and private contributions, the developer community in Asia is growing rapidly in 2019, of which 31% of Asian contributors are from China. 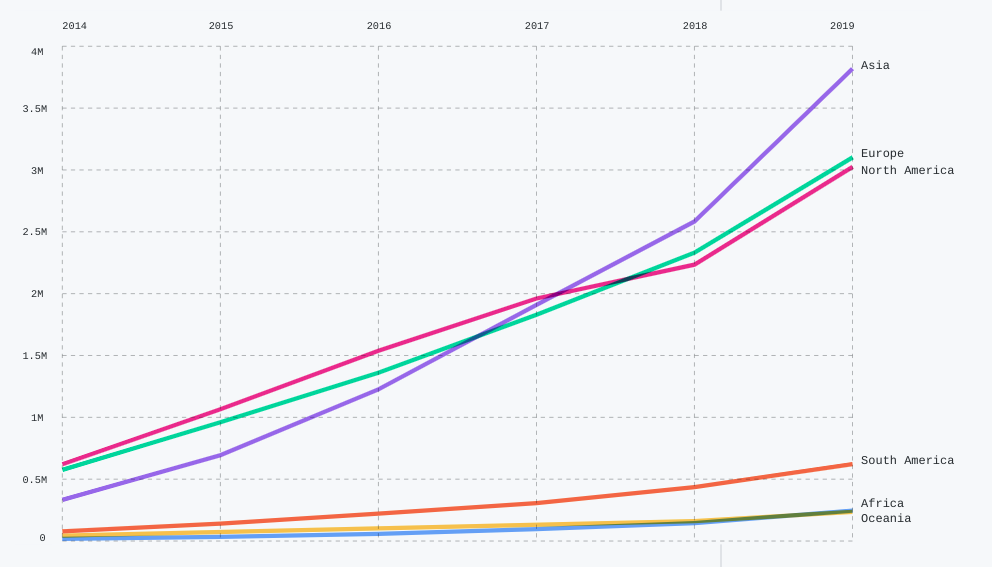 In addition to the above data on the GitHub itself, there are also data on some managed projects:

Detailed reports can be viewed:

Related news
GitHub publishes 2019 annual report, with more than 40 million users
GitHub or official landing in China! The largest open source software platform in the world is to set up a Chinese branch
GitHub Releases 2019 Annual Transparency Report
GitHub annual report: TypeScript beyond C into the fourth largest language
GitHub releases 2020 annual report: more than 56 million developers
Hot news this week
Announced real-fired people to change the news for four days, the chairman of Tianzhong semen was resigned for personal reasons.
Bank of East Asia (BEA) was fined 16.74 million yuan ($16.74 million) by the Shanghai branch of the People's Bank of China for illegal information collection
After the comprehensive suspension of "nurturance class" network comprehensive and indulgent drama, the audience deserves better
The drill bit of nasa's Perseverance rover was stuck with rubble and could not take samples for the time being
Chinese scientists have discovered a strategy for treating COVID-19: using particles to bind to the virus
Why do you want to take a red wine before going to! Shake a shake & quot; wine glass? After reading the line
ByteDance invested in Sequencing Technology, which is an AI industrial SaaS software service provider
Former search president of Baidu xiang Hailong joins Transsion The company that sells mobile phones wants to do more Internet
2021 Global Patent List Released: Huawei ranked fourth in the top five in the world in the United States
It's hard to escape the monopoly sanctions American court dismissed Facebook against FTC counterattack
The most popular news this week
In 2021, public security organs cracked down on more than 6,000 illegal payment and settlement gangs in 134 problematic games
People's Daily: Promoting Express Packaging "Green Revolution"
Ali health online the first domestic helicobacter pylori self-testing product "you tube", 10 minutes out of the results
Xiaomi Youpin Youyu announced the termination of operations
JP GAMES and Alibaba Cloud reached a cooperation to develop a metaversic solution based on the cloud
The camera is lost to the mobile phone Japan Canon close Zhuhai factory: small part parts are still working
Baidu announced connectivity with more than a dozen companies, including Meituan and Xiaohongshu
Xiaomi's mobile communication brand upgrade to achieve online self-service business
Jing Jia micro: JM5400, JM7200, JM9 series graphic processing chip successfully achieved industrialization
People's Daily: Let online literature better express contemporary China