At SC 19 supercomputing conference,Intel officially announced their Xe architecture GPU for high-performance computing）At the same time, it will also launch Intel's 7Nm technology. In 2021, it will be used for Aurora supercomputing, which Intel spent $5 billion to build for the U.S. Department of defense.

The Xe GPU architecture is a very flexible and extensible unified architecture, which can be divided into multiple micro architectures, so that it can be used in almost all computing and graphics fields, including 10 billion times of high-performance computing, deep learning and training, cloud services, multimedia editing, work stations, games, light and thin notebooks, portable devices, etc.

Specific to the Xe architecture for HPC,Its EU units can be greatly expanded to 1000And each cell is newly designed. The fp64 double precision floating-point computing power is 40 times of the current.

In the Xe HPC architecture, EU unit is connected to HBM high bandwidth video memory through xemf (Xe memory fabric) bus,Integration of large - capacity consistency cache at the same time. And supports ECC error correction and RAS at the most powerful level.

In encapsulation, emib is used to connect GPU and HBM, while foveros is used to interconnect Rambo cache, which is shared by multiple GPUs on the same mediation layer. Both will greatly improve bandwidth efficiency and density. 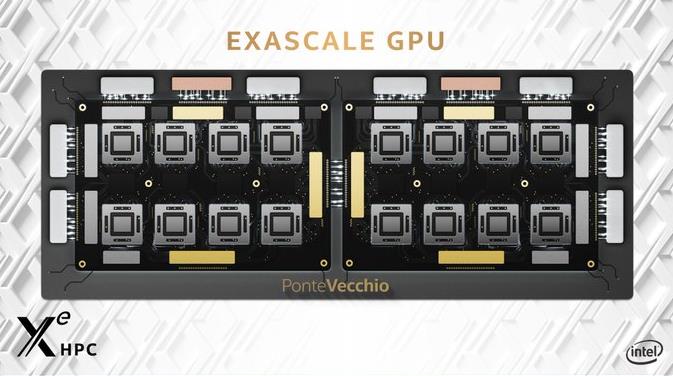 At the press conference, Intel's ppt failed to clearly show the internal structure of Ponte Vecchio GPU. Today, Raja koduri, Intel's chief architect and vice president in charge of high performance GPU project, released the internal structure of Ponte Vecchio chip,You can see that there are 8 sets of Xe computing cores on the left and right sidesAt present, it is only known that it is manufactured by 7Nm process, and the specific information in it is still not published.

In addition to the core of Xe computing, there are Rambo cache cache and HBM memory around, supported by the CXL bus and xemf bus developed by Intel for 10 billion times of computing, as well as technologies such as emib and foveros encapsulation. The technical content of Ponte Vecchio GPU is really high. 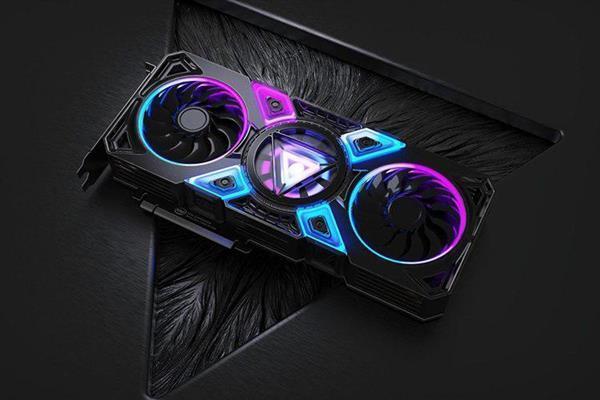 Related news
The biggest change in 13 years! Intel 12-generation GPUs are really hard to match.
Intel hinted at the biggest upgrade of GPU in 13 years since the release of the XeVideo card in June next yea
Intel Accelerated 7Nm EUV Process: The First Production of Xe Architecture GPU in 2021
Intel unveils 7Nm GPU chip: new Xe architecture integrates HBM display memory
Intel Xe single display integrated three new technology high-end game card DG2 needs to be 5nm on the stage?
Taiwan media: TSMC will take Intel's GPU OEM orders with 6nm process
Intel Xe DG1 GPU has been shipped and will be on sale this year
Intel Xe independent graphics card depth disclosure! Double GPU parallel, Acer's first launch
Hot news this week
China has found 35 known cases of the new zoonotic virus Langya
Losses in a single quarter of $ 23.4 billion a record, SoftBank did not carry the plunge of technology stocks and the devaluation of the yen
The prevention and control of the American Monkey epidemic has failed. What should I pay attention to?
Kuaishou launched a self-developed cloud intelligent video processing chip: The chip has been streamed successfully
The new product of Xiaomi MIX is coming: both internal and external dual -screen has been upgraded to make up for the previous generation.
Ministry of Public Security: Single telecommunications network fraud continues to cause 40 % of all electrical fraud cases
A new zoonotic virus, Langya, found in China has not yet been confirmed to be transmitted from person to person
A tech company in Shanghai has been fined 220,000 yuan for swiping orders to improve its ranking on Yelp
Special price "kill ripe"? Bike-sharing platforms have different prices for the same package for different users
Alibaba: Shareholders SoftBank will settle in advance for advanced payment in advance involving a maximum of about 242 million ADR
The most popular news this week
Google Fiber's home has been silent for many years and continues to expand after many years
Gurman: Apple is going to expand advertising into the new iPhone/iPad area
Studies have shown that the attacks by the game company have doubled in the past year
Apple's new iPad does not support 3.5mm headphone hole, Baidu map big update, anchor adopted two protected plants were checked, Rui Dragon 7000 series price stolen, these are the o...
A proposed ban on Internet addiction in California has failed
Industrial star attraction strategy to cope with the American semiconductor strangulation strategy
"Mother of the Chip" suffers! The United States blocked EDA to China: not so simple
8K Super Clear screen records Lingyue of China Space Station! Only 0.72 seconds
Sell to Tencent less than a year Sogou by the big purge: three major businesses are gone
After being suppressed by the United States, why did Ren Zhengfei thank you?