via: cnBeta.COM     time:2019/11/26 14:43:23     readed:591
The reality that IPv4 addresses around the world are running out has been publicized for many years, and that day has finally arrived.In fact, as early as the 1980s, researchers have foreseen such a future, and ushered in the depletion of top-level IPv4 addresses in 2012. Today, the regional IPv4 address inventory is exhausted.

With the final / 22 IPv4 allocation of the European Network Information Center (RIPE NCC) from the available pool at UTC 1 15:35 on November 25, 2019, all 4.3 billion IPv4 addresses around the world have been assigned, meaning that no more IPv4 addresses can be assigned to (ISP), the Internet service provider, and other large network infrastructure providers. 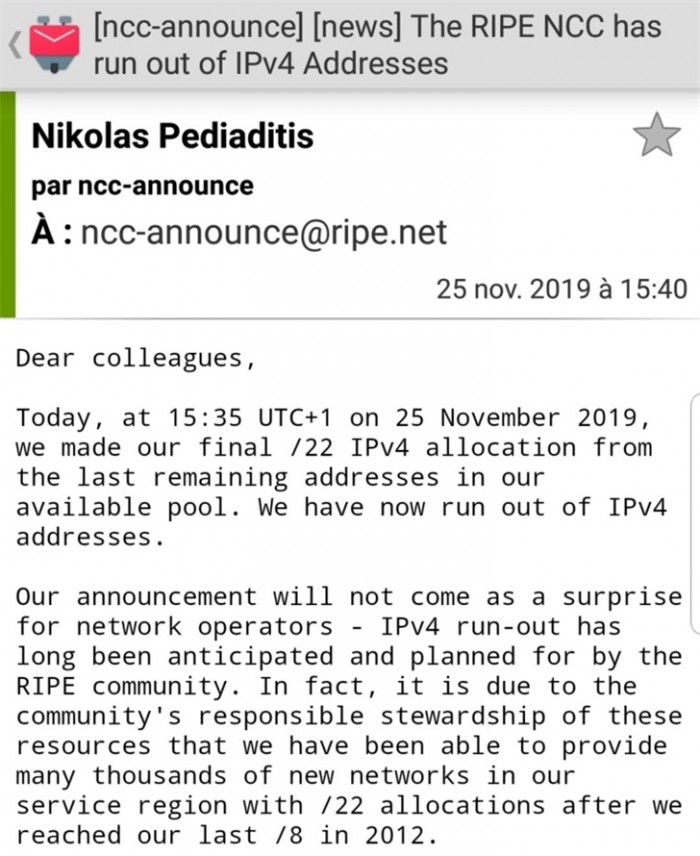 As a protocol standard, Internet Protocol IP is the only identification of network equipment connected to the network, which is called the "house number" on the Internet. At present, there are two versions of IP protocol: IPv4 and IPv6. IPv6 can provide more address resources than IPv4.

The exhaustion of IPv4 address has been foreseen for a long time, and the new internet protocol system IPv6 is advancing steadily.

As early as 2010, China has realized that there is no way out for China to deploy large-scale IPv6 network, so we must increase the strength of IPv6 address application to avoid the repeat of the situation of falling behind in the era of IPv4 network.

In order to break the root server dilemma, China led the initiative of Yeti DNS project, which recruited 25 root server operation volunteer units from all over the world to jointly test and verify IPv6 root server operation, domain name system security extension key signature and key rotation. By 2017, "snowman plan" has completed the installation of 25 IPv6 (Internet Protocol version 6) root servers in the world. China has deployed 4 of them, which are composed of 1 primary root server and 3 secondary root servers, breaking the dilemma that China did not have a root server in the past.

At the same time, the application of IPv6 is also advancing in an all-round way. On November 26, 2017, the general office of the CPC Central Committee and the general office of the State Council issued the action plan for promoting the scale deployment of Internet Protocol version 6 (IPv6). In June 2018, the three operators jointly announced that they will provide IPv6 services to the outside world in an all-round way, and plan to boost the realization of "IPv6 only" in China's Internet by 2025. On April 16, 2019, the Ministry of industry and information technology issued the notice on carrying out the special action of IPv6 network readiness in 2019, which plans to complete the transformation of 13 Internet backbone direct connection points IPv6 by the end of 2019.

With more and more network transitions, more and more content sites support IPv6, and more and more end users upgrade devices for IPv6 functions, China is becoming the leading force in the development of IPv6 system, firmly holding the fate in their own hands in the new era of Internet.

Related news
IPv6 deployment progress of China Telecom: the number of users has reached 305 million
Global IPv4 address exhaustion IPv6 new system is forming
More than ten years of innovation, China Mobile IPv6 project won the first prize of China Communication Society
Transition to next generation Internet: report card of IPv6
You Zheng, vice president of Tsinghua University: the Internet is in a critical period of switching from IPv4 to IPv6
Surpassing the U.S., China's IPv6 address is back to No.1 in the world
Hot news this week
Behind the exposed layoffs, China has praised the loss growth, and the stock price has fallen 67% in three months.
The news said that the Wi-Fi7 chip uses a 7/6nm process to stimulate QFN packaging and aging testing needs
Alipay life channel 20 million people see Wufu Sheng Xiaoka lottery live, fans: difficult for the public
The U.S. government is introducing new policies to attract international students in fields like science and technology
The U.S. Senate Committee passed the tech antitrust bill, and giants such as Apple and Google rose to the challenge
It has been exposed that it will be acquired by Tencent: the Black Shark 5 game mobile phone is officially announced!
China has successfully developed the world's lowest power phase change memory: a thousand times lower than mainstream products
Microsoft Apple Meta seizes the XR market, the Samsung of the fillet folding screen mobile phone or wants to catch up
K50 e-sports edition opponent is coming! A new Chinese phone released in February: it claims to be the best gaming phone
Station B Bilibili 2021 Top 100 UP Main Selection: 63% of new entrants, double the proportion of scientific and technological knowledge
The most popular news this week
7 years! The classic control panel doesn't die: Windows 11 takes another step back
All color renderings of the Samsung Galaxy S22/Plus/Ultra flow out
Indian smartphone shipments increased by 12% of China's reputation points near 68% share Samsung plans to add code
Three months after launch, Microsoft is "happy" with Windows 11: more successful than previous systems
Google announces the abandonment of FLoC: launches a new Topics API to replace third-party cookies
Reveal the "land Probe 1 A star" space autopilot: "time and space revisit" to predict geological disasters
Circle of friends can send more than 9 pictures weChat iOS version 8.0.18 official version of the new content public
Douyin push incentive plan: carry forward China's excellent traditional culture
Common software is spitted in an amazing: mobile phone app memory
A rocket launched by the United States 7 years ago was about to hit the moon and self-destruct: the speed was staggering