On November 23, a Zhihu user, who claimed to be an employee of Netease games, sent an article "Netease layoffs, let the security guard drive me out of the company suffering from terminal illness.". My nightmare in Netease! " The next day, the article quickly reached the Zhihu hot list. 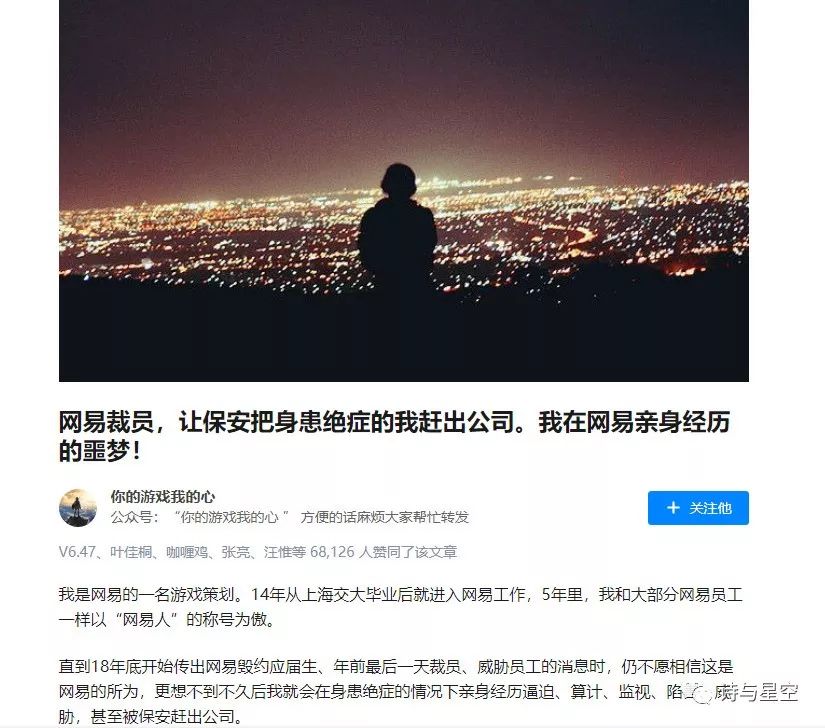 Later, on November 25, Netease issued a response, claiming that there were indeed many simple, rude, inhuman and other behaviors, and apologized to relevant former colleagues and family members.

NetEase said in a statement that the supervisor of the former colleague offered to terminate the labor contract for performance reasons.

This letter of apology did not satisfy the people who ate melon. Why?

Because it has exposed the greater problem of Netease on the contrary, one is why to let a manual workload with unqualified performance rank second? Second, why do employees find a way to quit without proper compensation?

On the first issue, it exposed a lot of management hidden dangers of Netease itself; on the second, Tencent and Jingdong set an example.

As early as 2016, Tencent launched a benefit, where the families of deceased employees can receive half pay for 10 years. We should know that the per capita income of goose factory is far beyond the social average level, and the half salary of goose factory is also beyond the reach of most ordinary people. It's also rumored that Tencent once made 54 cards of all its employees' benefits to help employees better understand the company's benefits. The big surprise is interest free purchase loans.

On November 25, Liu qiangdong, as always, came out to scratch the hot spot, saying that if an employee encounters an accident, he will bear all the learning and living expenses of the child before the age of 22.

It seems that Tencent and Jingdong are very responsible. Some netizens even think that the capital burden of Jingdong is very important. Whether Dongge's commitment can be fulfilled is a question.

In fact, Tencent's 10-and-a-half-year salary and JD's 22-year-old study and living expenses do not need the company to pay at all, because the real money is paid by the insurance company.

With the diversification of demand, insurance companies have developed a variety of life insurance and employer's liability insurance for group enterprises. These types of insurance are tailored according to the requirements of the company, and the cost is not high.

So what's the problem?

In his reply, NetEase stated that we are working for every employee in the

But under the tearful complaints of the sick employees, the statement seemed so feeble. Netease may not have bought so many insurance, Netease may be really difficult.

This employee's Netease game board is under unprecedented pressure.

The continuous decline of gross profit margin is mainly due to the relatively high proportion of mobile games in revenue and the relatively low gross profit margin of mobile games. As the performance did not meet expectations, after the announcement of the financial statements, Netease's decline expanded, once exceeding 7%, approaching 8%. Under the pressure of investors, Netease cut costs through layoffs.

Finish saying the Netease game, and talk about the Netease cloud music that has been on the topic for two years.

However, since 2018, NetEase cloud music

First, the infringement of Zhou Jilun, then the increase of the advertisement, and then ask the opponent to not be the exclusive copyright, and do the sole copyright

What's more, in April 2019, Netease cloud music deleted the downloaded music in users' mobile phones, even the music downloaded from other third-party platforms on the basis of copyright.

According to the analysis of the lawyers of China Consumer Association, this kind of behavior is illegal and belongs to the infringement of consumers' property rights.

Why does Mingming, a small and fresh music app, suddenly become so naked?

The answer is, lack of money, go public and circle money. When Netease Youdao officially went public in the US IPO bell, Ding Lei said in a subsequent interview that in the future, streaming music services will be independent and Netease cloud music will also be listed independently.

With the user base, there is an urgent need for performance in the next step, especially after the successful listing of QQ music, the liquidity pressure of Netease cloud music is great.

Moreover, with less and less copyrighted music, the fans of Netease cloud music began to waver one after another.

The segment division of the third quarter report is a signal that this business may no longer be valued: Netease strict selection and Netease cloud music business are classified into innovation and other businesses.

The attitude of Netease HR towards the sick employees is not cold in one day. Obviously, it has been used to this kind of bullying style. Many resigned employees who are eager to find a family do not have the energy to fight with HR. However, because of a serious illness, the employee is no longer able to find a home, but he is determined to fight with HR. Because of this, the problems of Netease are exposed: growth is worrying and diversified development is in trouble.

However, there is still a word to advise Netease HR, and you will also encounter the day when you leave.

Related news
I want my ex back now with love spell urgent 2021/2022
I need an urgent love spell caster to bring back my husband
I need powerful spell caster 2021/2022
I need a spell caster to help me bring back my ex lover 2021
I urgently need a powerful spell caster to bring ex lover
I Nee a spell caster to bring bac ex lover2021 post comment
I Need a powerful spell caster to help bring back ex lover
I urgently need a spell caster to bring back ex lover 2021
I Need a spell caster to bring back my ex lover 2021/2022
Hot news this week
Zhao Lijian responded to the British "blocking" Huawei: generalizing the concept of national security harms others and harms themselves
Zhao lijian said the UK's decision to block Huawei under PRESSURE from the US was damaging others and not benefiting itself
ByteDance invested in Sequencing Technology, which is an AI industrial SaaS software service provider
It's hard to escape the monopoly sanctions American court dismissed Facebook against FTC counterattack
Former search president of Baidu xiang Hailong joins Transsion The company that sells mobile phones wants to do more Internet
Involving the "three crimes" such as the misappropriation of loan funds, the Shaoxing branch of Guangfa Bank was fined 1.1 million yuan
Foxconn announced that it had resumed production in India: only 120 workers had been brought back to work for the first batch
AsiaInfo Technology Announces Acquisition of iResearch Consulting to continue to increase digital operations and digital and intelligent transformation
30-year veteran Gregory Bryant says goodbye to Intel
After the suspension storm, Amazon's Chinese sellers increased by double digits, and sales exceeded $50 million.
The most popular news this week
Airlines cancel US flights: Reason for frustration
The pinnacle of Xiaomi industrial design! Xiaomi god machine price reduction: from 2499 yuan
Scissor doors, lifting lidar! Baidu car under the blood cost of the concept car details were first exposed
Premium 45.3% Microsoft Guarantened 68.7 billion US dollars to acquire moving flights PK Faces compete for content production faucet
Phil Spencer, CEO of Microsoft's Gaming Business: Welcome to Activision Blizzard to the Microsoft gaming family
Microsoft announces acquisition of Activision Blizzard on hot search! Netizens sighed: 400 billion cash transactions
Half a billion! Pay treasure collect five blessing to come: exceed 50 thousand people collect qi have you
Snapdragon 888 Plus Is the King of Sex! The best selling mobile phones at the 2000 price point were announced
Microsoft 68.7 billion US dollars acquired moving Blizzard: will become the third big game company in the world!
Apple releases AirPods 3 firmware: Version 4C170