On the afternoon of December 1, it was reported that after the violent resignation of Netease employees, Huawei was also exposed that some employees suffered unfair treatment:An old employee who has worked in Huawei for more than 10 years was charged with extortion by Huawei for asking for 300000 yuan as compensation for his resignation. Shenzhen Public Security Bureau detained / arrested the employee for 8 months. 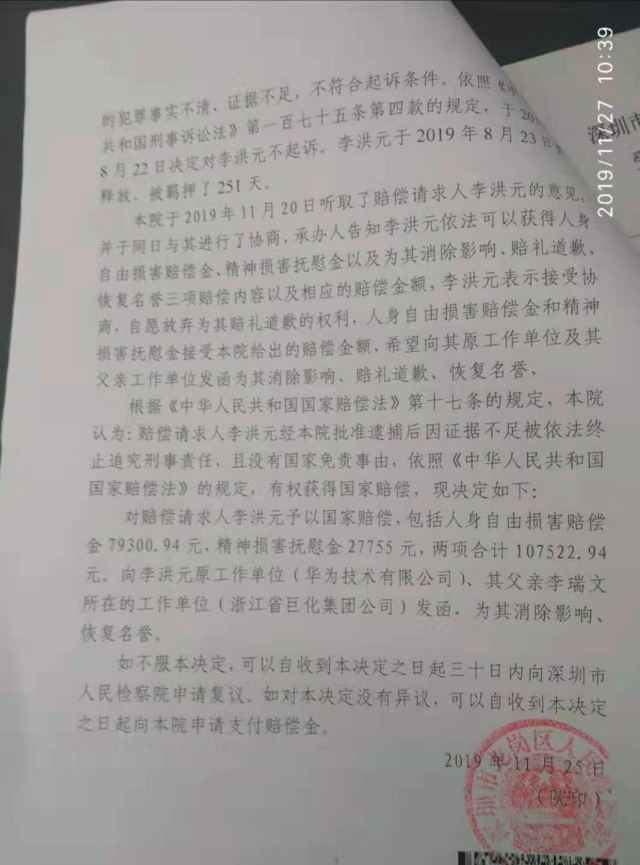 However, in December 2018, Li Hongyuan was detained by the Shenzhen Municipal Public Security Bureau because Huawei sued him for "suspected extortion". The evidence of the prosecution is the transfer record of 300000 yuan in the personal account of the Department Secretary.

After the supplementary investigation by the investigation organ, in August 2019, the people's Procuratorate of Longgang District of Shenzhen City decided not to prosecute Li Hongyuan because it believed that the facts of the crime were unclear and the evidence was insufficient, which did not meet the conditions for prosecution, and Li Hongyuan was free again.

At present, Huawei officials have no response to this matter.

But just last month, Huawei also exposed an incident involving the HR system. A Huawei employee who transferred from R & D to HR posted a post in Huawei's voice community, pointing out the contradictions between R & D and HR, HR inaction and other problems existing in Huawei, which attracted widespread attention.

Related news
The new HUAWEI MateBook E is coming with the support of Luan 850 platform.
Disassembly report: Huawei freebuses 3 real wireless headset
Hot news this week
Challenge the fierce rival Intel amd Su Zifeng: This is just the beginning!
Musk is going to blow up the rocket tomorrow
Huawei mate XS Ministry of industry and information technology access: equipped with Kirin 990 5g, better hinge / screen
Can't OEM 16nm chips for Huawei? TSMC: hard to estimate but ready for changes in export control at any time
Samsung Galaxy a71 5g exposure: equipped with exynos 980, square four shot
Magic mobile phone protection shell, match 20 Pro for sale, match 30 Pro for second change
NetEase cloud music and station B could be the only two accidents
Unsealed Taobao account in 980: no malicious refund
Samsung Galaxy a71 5g exposure: cheap "note10" with exynos 980 and square four shot
TSMC denies being pressured by the us to set up factories in the US: there is no final decision at this stage
The most popular news this week
NetEase cloud music and station B could be the only two accidents
President of Xiaomi International: Xiaomi still wants to enter the US market dominated by apple and Samsung
Over 80 million yuan of contract has been awarded to golde infrared for the application of self-developed chips in the prevention and control of pneumonia
Huawei Developers Conference Announces Extension: Change to Live Online as a New Pneumonia Epidemic
Microsoft chromium edge stable edition ushers in the "new tab" after function improvement
Huawei P40 Pro toughened film spy exposure: the effect of increasing screen curvature is worth looking forward to
DxOMark announces iPhone 11 score: 109 points, just equal to Huawei P20 pro of the year before
Google and Mozilla are sending cake to Microsoft's new edge team
Samsung Galaxy S20 series is expected to debut on March 13: simultaneous exposure of price information
Google released the most powerful 1 / 3 brain map of Drosophila, with 25000 neuron connections accurately located!