Li Hongyuan responded to Huawei's statement: first of all, I listen to the people's

"Let's see. I listen to the people of the whole country."On the evening of December 2, after seeing the official response of Huawei, Li Hongyuan, a former employee of Huawei, said to the first financial reporter. Public opinion about the 251 day detention of Li Hongyuan, a former Huawei employee, due to the issue of severance compensation continued to ferment. On the night of December 2, Huawei made a formal response.

Huawei told the first financial reporter that Huawei has the right and obligation to report the suspected illegal acts to the judicial authorities based on the facts. "We respect the decisions of the judiciary, including public security, procuratorates and courts. If Li Hongyuan thinks his rights and interests have been damaged, we support him to use legal weapons to protect his rights and interests, including suing Huawei. It also embodies the spirit of the rule of law that everyone is equal before the law. "

In the evening of that day, in the face of fermentation on the Internet, Li Hongyuan once told reporters, "calm down."

Li Hongyuan's wife, in an interview with the media, said she had not yet considered whether she would sue Huawei, but hoped for an apology.

According to the criminal compensation decision of Shenzhen Longgang District People's Procuratorate issued by Li Hongyuan to reporters, he entered Huawei in 2005 and served in Huawei for 13 years. According to the reporter, Li Hongyuan's first contract was signed on September 30, 2006. Subsequently, the contract was renewed five times, each time ranging from one year to two years and one month. The sixth contract expired on December 31, 2013. 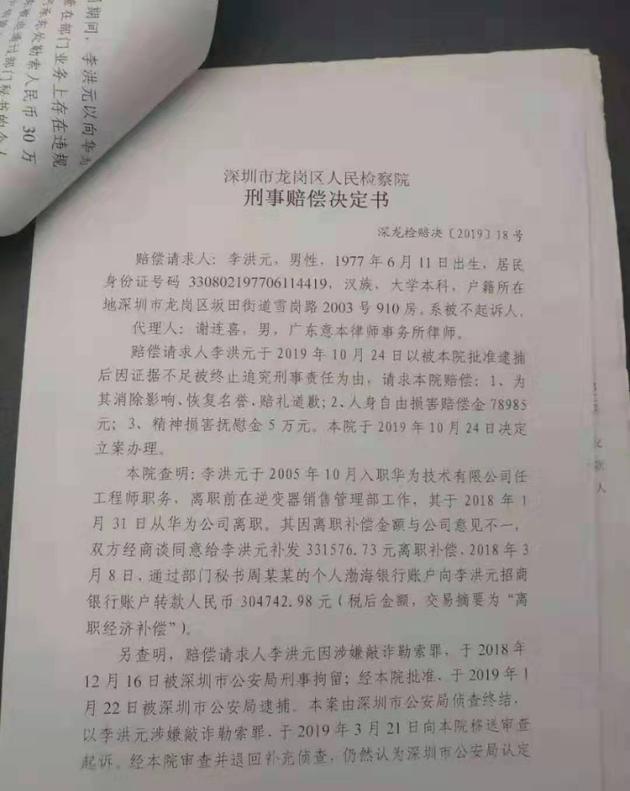 According to the reporter, Li Hongyuan originally planned to sue Huawei, but in the ferment of public opinion now, whether he will sue again has to be questioned.

According to the reporter, Li Hongyuan originally planned to sue Huawei, but in the ferment of public opinion now, whether he will sue again has to be questioned.

Huawei response: support Li Hongyuan to use legal weapons to protect his rights and interests