Apple and Microsoft lead the rebound of U.S. stocks in 2019. Analysts bet to continue to outperform the market

According to media reports, apple and Microsoft led the rebound of US stock market in 2019. The two companies have a combined market capitalization of $819 billion this year, setting the Dow Jones industrial average at a record high.Last week's data showed that if these gains were eliminated from the Dow, the index would be nearly 1100 points below its current level.

Ari Wald, Oppenheimer's head of technical analysis, is betting that both companies will continue to outperform.

"We do think the two companies can continue to lead the way and have no preference for them," Wald said on Monday. We do see a top-down downwind from the rising market, which is supported by a relatively strong technology sector. " It also believes that the bull market will continue until 2020. 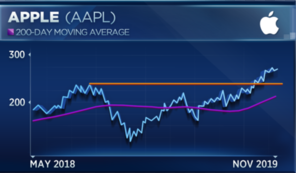 "Compared with the market in 2012, we think the recent rise of apple is a breakthrough, which indicates that Apple will continue to lead the market," said Wald. "Apple has also broken through the resistance level of its peak in 2018, so we think the stock will still show an upward trend, and there is no sign that the stock price has reached its peak." 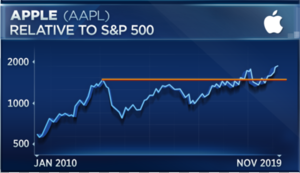 "Technology is now booming. I think we are in a 30-50 year technology boom, which will never be seen again in the next 500 years, so we should pay attention to these two companies with very good earnings and profit growth prospects. They lead not only the technology industry, but also the market, which is what I like. " Bapis said.