It's less than a month to say goodbye to us in 2019, but this year's mobile phone market war is still not finished. In this month, a large wave of 5g mobile phones will be released, including redmi, vivo and oppo. Of course, most of these models are located in the middle and high-end, and we hope that friends of flagship aircraft can wait for the Spring Festival to come, and a new wave of climax will come soon.

The time for this list is from November 1 to November 30, with the results of the list being the average score of the statistics, not the highest score, and the single model data statistic

At the same time, in order to facilitate more users to choose models, rabbit has joined the performance ranking of the mid-range models since last month, and this month is no exception. 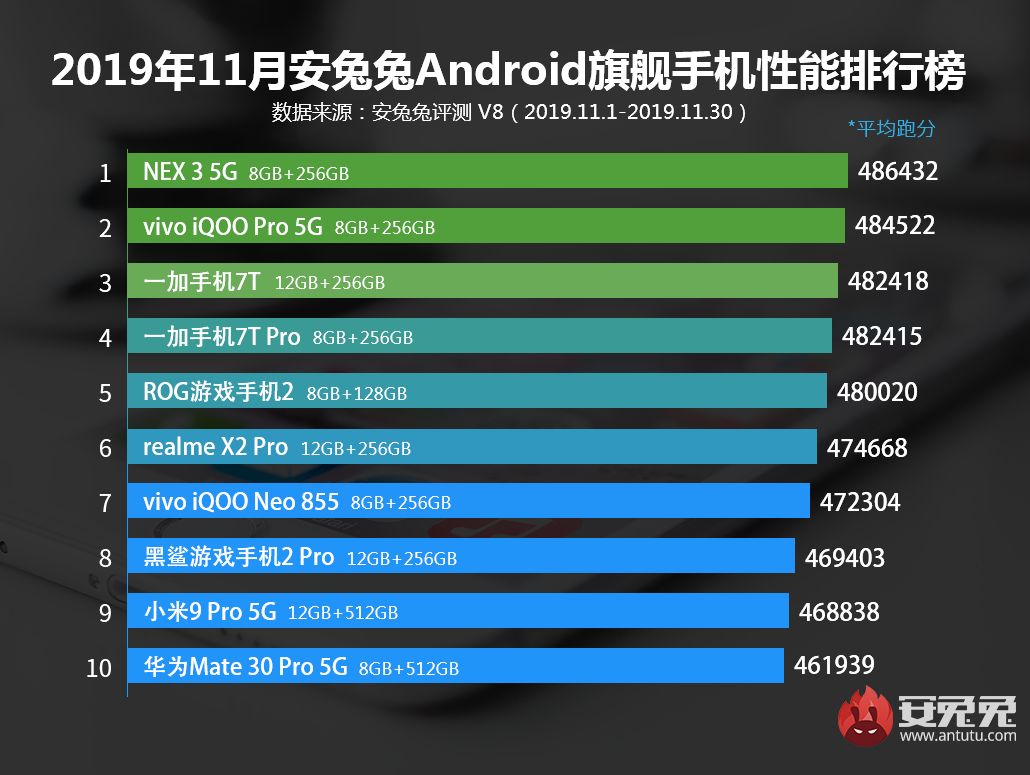 The reason why the two can achieve such achievements and strong configuration is inseparable. They are equipped with Xiaolong 855 plus mobile platform and UFS 3.0 flash memory chip. In terms of software, they are supported by f2fs file system, turbo write, HPB technology and monster compilation enhancement technology, so they have achieved better performance than ordinary Xiaolong 855 plus models.

However, why the one plus 7T pro with a stronger configuration has almost the same running score as one plus 7T? Here rabbit can only use different firmware adjustment methods to explain, because by comparing the sub scores (see the sub scores on the detailed page of the list), it can be seen that one plus 7T performs better in GPU, while the storage performance of one plus 7T Pro is better.

In addition, we can also see from the sub scores that the UX performance of the one plus 7T series is better than that of the 60Hz series because of the 90hz screen used in the whole series.

The above is the top ten performance of rabbit's flagship mobile phone in November. From the list, we can see that in addition to flagship SOC (snapdragon 855 plus or Kirin 990 5g), UFS 3.0 flash memory or high refresh rate screen is also essential (millet 9 Pro 5g improves performance through greater storage capacity). After all, the tough hardware configuration is the key to score Basic, software adjustment can make running points to a higher level.

Next, let's take a look at the ranking of mid tier models: 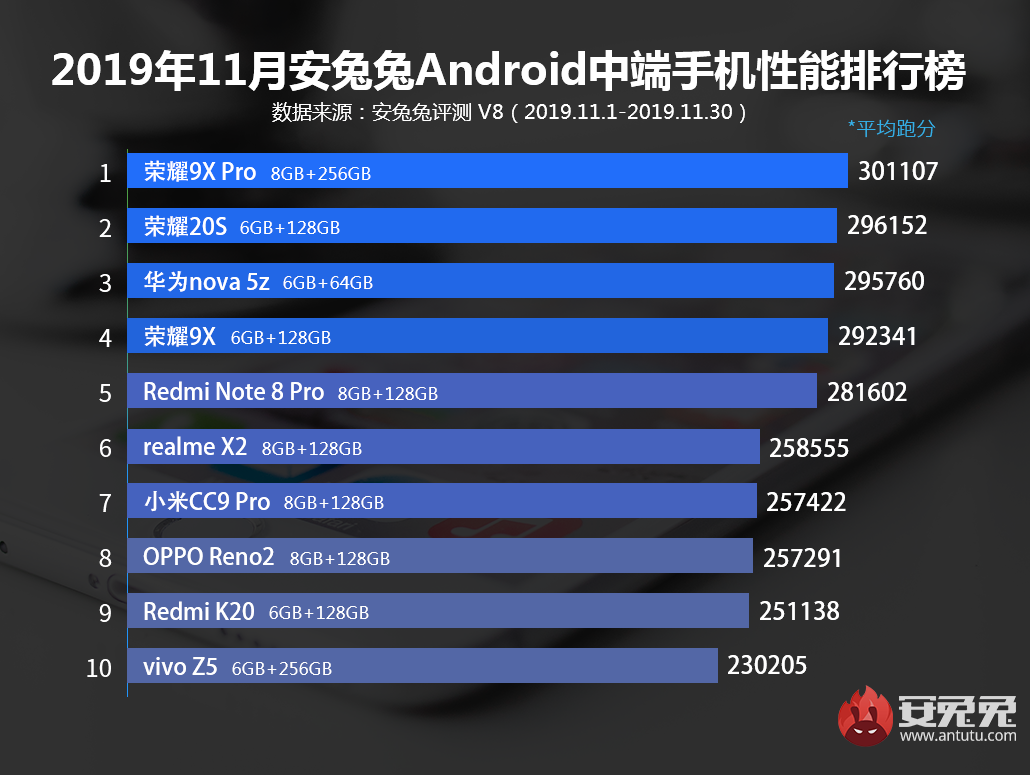 For the midrange model, a relatively strong SOC with UFS flash memory chip is also a necessary condition for listing. A larger storage configuration or dual channel UFS flash memory is a bonus item.

The above is the performance ranking of Angora Android mobile phones in November. It should be noted that the above models may not be all top matched versions. In theory, the top matched version runs better because of higher storage configuration, but it cannot be listed because of the insufficient number of valid samples.

In addition, running score is just a reference standard when choosing a mobile phone. In fact, it is difficult to present a score for the parts related to user experience, such as photos, endurance, shape design, hand feel, etc. Therefore,Rabbit rabbit recommends that you should take a comprehensive consideration when purchasing mobile phones, choose the one that suits you best.

Related news
Foreign media speculated that Windows 10 November 2019 will be released on November 12 (Figure)
Microsoft announces the configuration requirements of windows 10 November 2019 processor (Figure)
Microsoft now invites more members of windows insider to test the novamber 2019 update (Figure)
Windows 10 November 2019 ready: more detail exposure (Figure)
Windows 10 November 2019 file manager search bar cannot call out right-click menu
[tips] how to download windows 10 November 2019 image directly from Microsoft official website
Rabbit Android mobile phone ranking released in November: vivo nex 3 5g ranked first
Rabbit released: Android mobile phone performance list in November 2019
Hot news this week
Bitcoin mining machine giant Yibang international successfully listed in the United States: raising more than $100 million
China's second-biggest retail channel for smartphones in May Huawei is a step away
Huawei cloud's industrial Internet business experience: how to make the cloud serve the entire "circle of friends"?
Huawei's first mobile device equipped with Hongmeng may be Kirin 1020 with a 5-nm process
After the total ban, the United States announced the arrest of Fujian Jinhua General Manager Chen Zhengkun!
Japanese legislation forbids walking and playing mobile phones: mobile phones in public places should stand still
NASA announces the name of the headquarters building after its first black female Engineer
A reporter from the United States who was infected with the new coronavirus took part in the trump campaign rally
Most people don't know that the hole at the bottom of the original mobile phone also has this function
A hundred yuan 5g mobile phone is not far away. It's said that the new mt6853 of MediaTek has been launched
The most popular news this week
Wechat has not done this function for N years! Use this app to make up for the defects of wechat
Zhao Ming responds to the offline interview with Yu Chengdong: the pressure this year is much greater than that of last year. Huawei glory is the only two growth brand
How long will it take for a real 1000 yuan 5g mobile phone? Zhao Ming: we have to wait
Glory Zhao Ming: 5g mobile phones account for nearly 50%
Byte beat vice president reconnects Tencent?
It's incredible that Intel will push the z590 chipset pci4.0 early next year?
Selling business out of multinational market
What is the status quo of domestic memory chips?
Zhao Ming talks about 5 G mobile phone competition: do a good job of products without gimmick
What are the difficulties of large screen mobile phones in 5g era? Glory Zhao Ming: it's hard to change it after two years' sharpening