By default, 80% of Android apps are using encrypted traffic

Google said that as of October 2019, four fifths (80%) of Android apps available for download through the official play store were using HTTPS to encrypt their network traffic. For apps that target Android 9 directly, the number is even higher, reaching 90%. This means that traffic entering or leaving one of these applications is encrypted and cannot be intercepted or read by a third party. 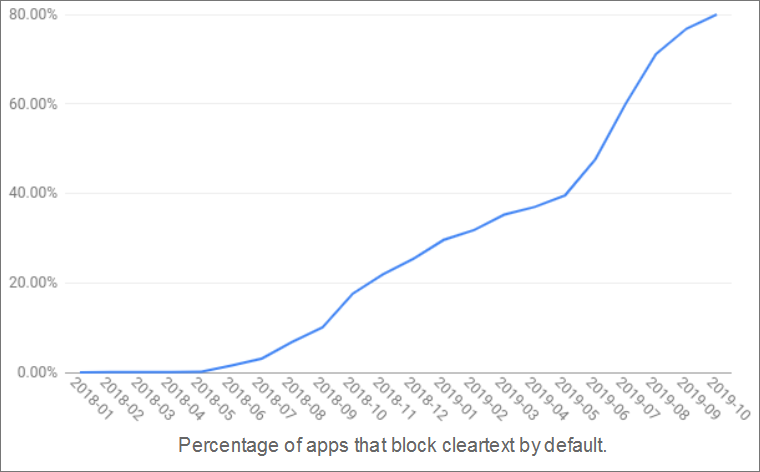 Google expects that number to rise in the next few years, mainly because the company has gradually launched and implemented a series of measures since 2016. It includesWarnings in IDE tools and Google play developer dashboards。

It is reported that since 2017, Google has been promoting Android developers to integrate encrypted traffic into their applications, so as to provide better security and privacy when applications communicate through the Internet or the network.

Since Android 7 in 2016, Google has introduced a network security profile that allows application developers to choose not to use clear text when performing network communications. In the Android 9 released in 2018, Google further took measures to make all applications targeting Android 9 or later automatically use the default policy to prevent applications from using unencrypted traffic.

It is worth mentioning that Google is much better than apple in implementing HTTPS for application developers. A report released in June 2019 found that only a third of IOS applications are using ATS, a technology used to encrypt the network traffic of IOS applications.

In addition to Android App makers, Google has also successfully pushed websites to adopt HTTPS instead of the vulnerable HTTP protocol.

According to the company'sTransparency Report, HTTPS usage in Chrome is now between 85% and 95%, depending on the platform.

For example, 89% of all sites currently loaded in chrome in Android are loaded through HTTPS. On Chrome for windows, that's 84%. 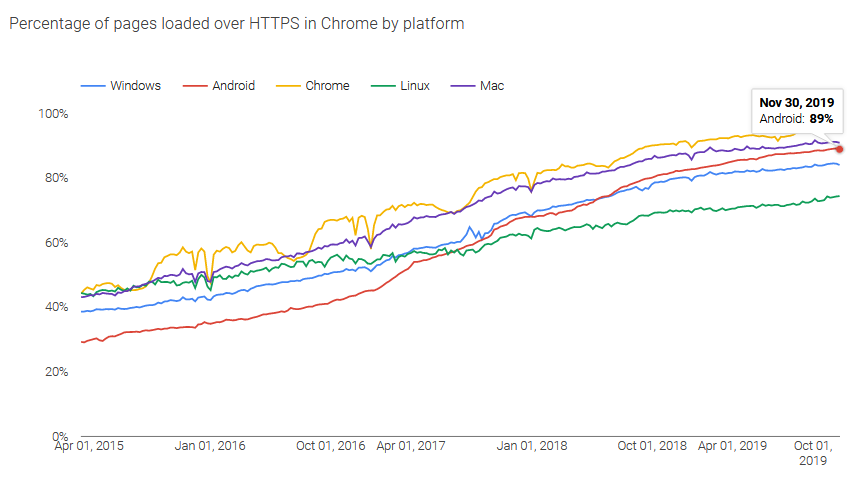 A similar situation can be seen in Firefox, which recently reported its own milestones, as early as September and for the first timeThrough HTTPSLoadMore than 80% of all web pages。

Related news
Android 10 release
Are you OK？ Sogou input online "Lei Jun imitation" voice
By default, 80% of Android apps are using encrypted traffic
Huawei Kunpeng PC with powered by Kunpeng will be available soon
Hot news this week
Tesla's response to the spontaneous combustion and explosion of Shanghai model 3: preliminary judgment that the accident was caused by the collision under the car
Pinplay: has filed a lawsuit against Tesla for infringing pinplay's reputation right through the Internet
China's auto chips stopped in Europe and America? Official response
Global chip crisis worsens Ford closes German factory for one month
Huawei upgrades 2021 notebook models of matebook series: 11 generation core from 5499 yuan
Full screen bomb is playing crazy wechat Android version 8.0 beta version comes with download
Girls will be tied to the doll on the back to take home during the holiday netizen: This is too caring
Intel and AMD motherboards are in chaos
NVIDIA's acquisition of arm may be rejected by one or more regulators
MIT biologists reveal why cancer cells waste so much energy
The most popular news this week
Samsung Galaxy note 20 Fe exposure: or the best of Note Series
Optional update for windows 10 version 1909: fix directory name invalid error
What does the new coronavirus look like? First 3D image exposure: like a ruined planet
LG mobile phone business turbulence: scroll screen may not be listed
Windows 10 21h1 confirms that the update range is not big: it mainly fixes bugs and optimizes performance
Wechat "explosive" update? Wechat 8.0 full experience of new functions
Reported that the iPhone 12 Mini sales in the United States and Europe are not as strong as expected
European Parliament invites CEOs of four US technology giants to attend antitrust hearing
Why Tencent is the Chinese version of Microsoft in the era of car building and navigation
Wuxi an import car Li son surface nucleic acid positive netizen: again cheap also dare not eat