December 6 news,The 75 inch Xiaomi TV 4S is priced at 3999 yuan today. You know, when it was released in November last year, its official price was 7999 yuan. In just one year, the price has been cut.

In September this year, the 70 inch version of Xiaomi TV 4A was released, priced at 3999 yuan. Comparatively speaking, at the same price, the millet TV 4S with larger screen is quite competitive.

At present, there are three 75 inch versions of millet TV on sale, of which 4S 75 inch is the cheapestThe other two models are Xiaomi TV 475 inch and Xiaomi TV 575 inch, selling for 8999 yuan and 7999 yuan respectively. 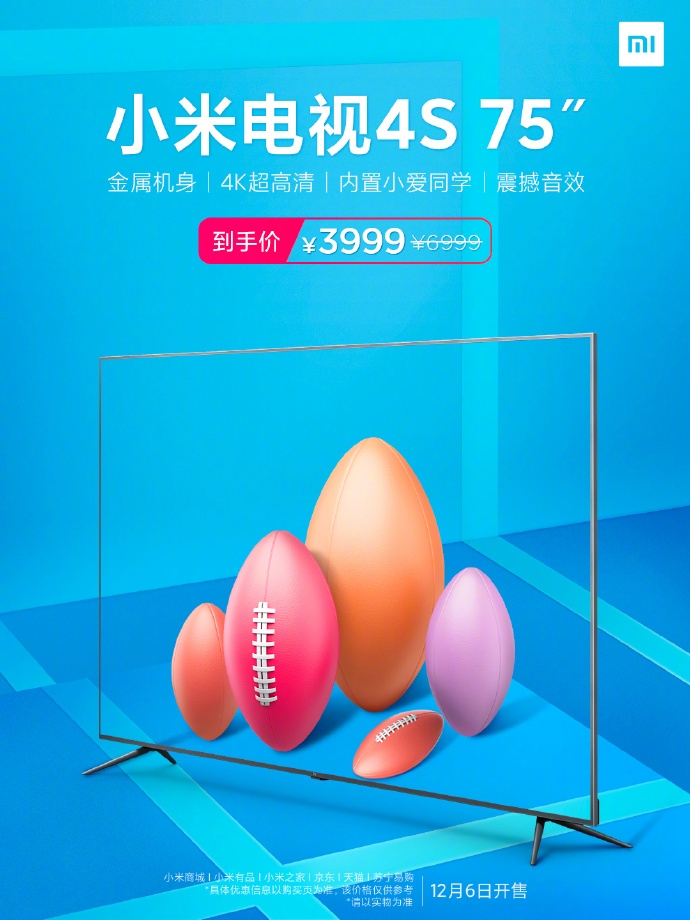 At the same time, the Xiaomi TV 4S 75 inch is equipped with the patchwall artificial intelligence voice system. What do you want to see and know, press and hold the voice key of the remote control to say. It is also the intelligent housekeeper of the family, which can control intelligent devices by voice.

It is worth noting that the 75 inch Xiaomi TV 4S is equipped with three HDMI interfaces, two USB interfaces, AV, Ethernet and other necessary interfaces as standard, which can easily connect computers, speakers, game consoles and other devices to the TV. 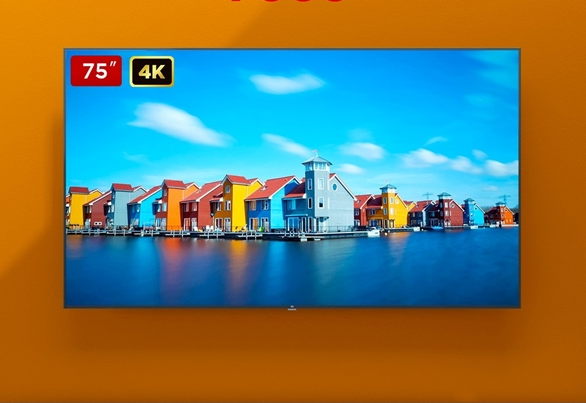 Related news
Xiaomi TV 4S 75 inch history new low: release one year price cut back
Xiaomi TV 4S 75 inch history low: one year price cut
Xiaomi TV 4S 75 inch, 1400 yuan less than Xiaomi 10 Pro
Hot news this week
Tesla's response to the spontaneous combustion and explosion of Shanghai model 3: preliminary judgment that the accident was caused by the collision under the car
Pinplay: has filed a lawsuit against Tesla for infringing pinplay's reputation right through the Internet
China's auto chips stopped in Europe and America? Official response
Global chip crisis worsens Ford closes German factory for one month
Huawei upgrades 2021 notebook models of matebook series: 11 generation core from 5499 yuan
Girls will be tied to the doll on the back to take home during the holiday netizen: This is too caring
Full screen bomb is playing crazy wechat Android version 8.0 beta version comes with download
Intel and AMD motherboards are in chaos
NVIDIA's acquisition of arm may be rejected by one or more regulators
MIT biologists reveal why cancer cells waste so much energy
The most popular news this week
Optional update for windows 10 version 1909: fix directory name invalid error
What does the new coronavirus look like? First 3D image exposure: like a ruined planet
LG mobile phone business turbulence: scroll screen may not be listed
Windows 10 21h1 confirms that the update range is not big: it mainly fixes bugs and optimizes performance
Wechat "explosive" update? Wechat 8.0 full experience of new functions
Reported that the iPhone 12 Mini sales in the United States and Europe are not as strong as expected
European Parliament invites CEOs of four US technology giants to attend antitrust hearing
Why Tencent is the Chinese version of Microsoft in the era of car building and navigation
Wuxi an import car Li son surface nucleic acid positive netizen: again cheap also dare not eat
Tencent cloud legitimate music library through train released single products, providing digital music licensing for small and medium-sized customers