GitHub or official landing in China! The largest open source software platform in the world is to set up a Chinese branch

GitHub, or officially in China! According to foreign media, the world's largest software development platform, GitHub, plans to open a branch in China.

GitHub to land to China

GitHub, the world's largest software development platform, plans to open a subsidiary in China, according to the financial times.

I. how will GitHub enter China?

Strictly speaking, GitHub is still famous outside the programmer community, but it is not a household name among ordinary people. This American company is the largest open-source software repository in the world. It provides a crucial digital infrastructure. Many of the billions of dollars of software businesses around the world rely on GitHub infrastructure.

In 2018, Microsoft acquired the company at a price of $7.5 billion. Microsoft CEO Sadia

Now, more developers from China may soon find a more comfortable home in GitHub. According to the economist, although GitHub's plan to enter China has not yet been officially announced, it is still at an early stage. But Erica Brescia, GitHub's chief operating officer, has come to China many times in recent months to attend events and visit Chinese developers.

In mid September, she hosted GitHub's first event in China in Shanghai. On December 2, she held another meeting with developers in Shenzhen. On December 4, it co hosted similar activities in Beijing.

Sheng Wu, a Beijing-based developer who attended the meeting, said GitHub discussed the possibility of publicly expanding its Chinese business. GitHub, a GitHub employee, said GitHub's profit product for big companies has recently passed. China has become the second most important market of GitHub after the United States, and it has developed rapidly。

Previously, there were two kinds of speculation about GitHub's entry into China.One possibility is to place the server closer to Chinese developers, perhaps in Hong Kong or Singapore。 Chinese developers welcome this, because scattered access to GitHub is often complained about by the server's response speed. The latest location of GitHub servers has not yet been disclosed, but in 2017, all servers were located in the United States, with slow and unreliable connections to China.

A more radical option is to set up a new company under the jurisdiction of the Chinese government。 This will allow GitHub to set up servers in mainland China, but may raise some questions about how GitHub manages computer code databases in the jurisdictions of China and the United States.

According to the financial times, Brescia said,GitHub is planning to take, starting from the general manager.After that, the company may explore the possibility of setting up a joint venture and hosting GitHub content in China.

II. The GitHub is subject to export control and ban.

Bao Yungang, director of advanced computer system research center of Computing Institute of Chinese Academy of Sciences and Secretary General of risc-v alliance, said in the interpretation of risk analysis and Countermeasures for open source projects: github.com clearly states that github.com, GitHub enterprise server and the information on both are subject to export control. 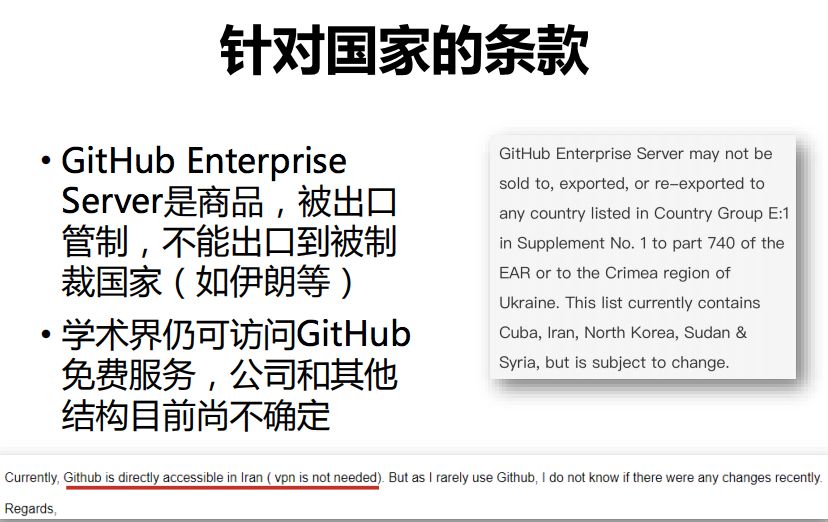 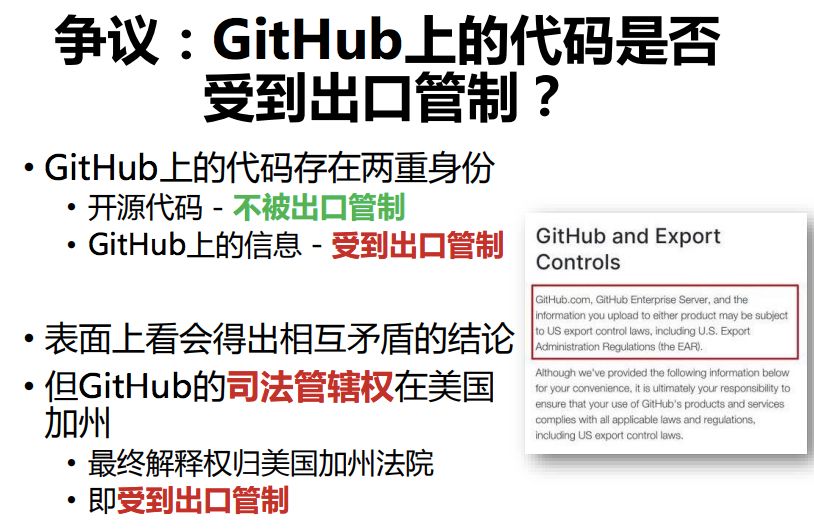 In July, the GitHub began to limit the account number in terms of nationality, on the ground that they were in violation of the U.S. trade control law. The restricted account owner's nationality includes Russia, Iran, Syria, Cuba, etc.

An Iranian developer also posted on reddit for help, saying that GitHub now forbids Iranian users, that all Iranian accounts have been blocked, and that netizens are requested to support it. 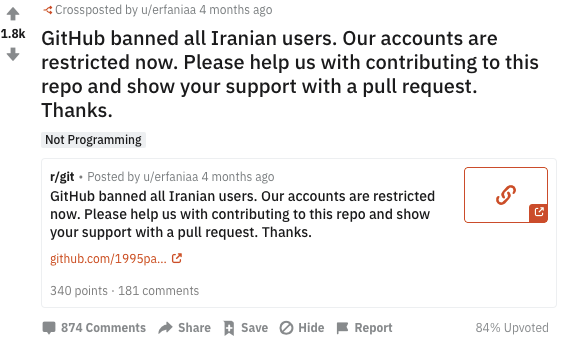 Chinese developers are concerned that they may not be able to access GitHub if the US extends its export sanctions on China. GitHub has said it will lobby US regulators to stop the expansion of export controls.

Brescia said the Chinese government wants domestic developers to use more open-source software to prevent the risk of being cut off from software developed by the US as trade tensions continue. As open source software is open and free, it is not subject to US sanctions.

Without GitHub, Chinese companies will not be able to access the code of open-source software, which may cause the program to be old and difficult to update and upgrade.

Some open source software is critical to the Internet; for example, Apache's open source web server software is used by one third of the world's websites, and its development is supported by an American Foundation.

While other foreign technology companies' platforms may block Chinese users, GitHub is still accessible. China is also trying to develop its own open source projects. Earlier this year, Huawei announced that it would work with the government and other domestic technology giants to set up a foundation to stimulate domestic open-source software development.

Wang Chenglu, President of the CBG Software Department of Huawei, said at the company's developer's conference that:

How important is China to GitHub?

According to the 2019 annual report released by GitHub last month:GitHub currently has more than 40 million developers worldwide, 80% of which are from outside the United States。

Over the past year, 10 million new developers have joined the GitHub community, contributing to 44 million open source projects around the world.

This year, after the United States, China is the country with the most open source use. Among them,China's developer fork and clone projects are 48% more than last year。

Open source use of top 20 (except the United States)

Hong Kong, China, is the largest contributor to open source projects. In addition to open source, in terms of public and private contributions, the developer community in Asia grew rapidly in 2019. 31% of Asian contributors are from China. Since 2014, the number of developers outside the United States has been on the rise, and the annual growth rate of the Asian contributor group has exceeded that of Europe and North America. 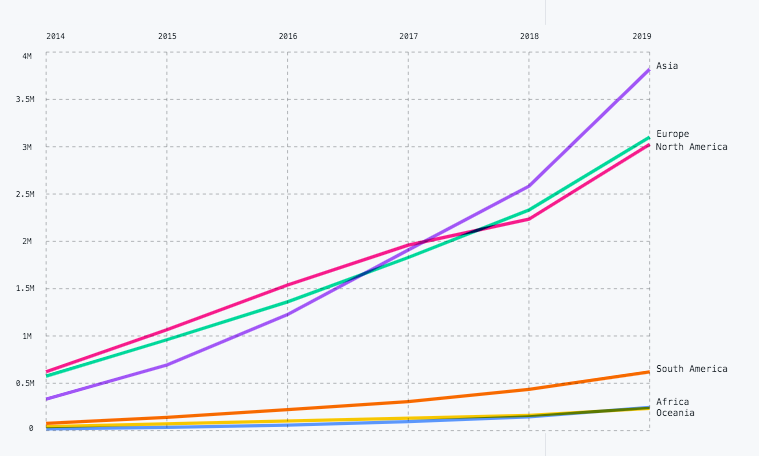 Number of contributors by continent

Chinese developers are an indispensable part of GitHub, but given the current tense situation, who can guarantee that GitHub will not be forced to restrict its account in China in the future? In this way, GitHub's entry into China is good for both sides.

Related news
GitHub or official landing in China! The largest open source software platform in the world is to set up a Chinese branch
Three questions about GitHub's entry into China: why come to China? How to enter China? What's the point?
What do you think of GitHub's plan to enter China as a developer?
GitHub Releases 2019 Annual Transparency Report
The English name of Chinese liquor has been changed: Chinese Baijiu has been officially launched
China's domestic alternative to GitHub
Hot news this week
Young people can't change their mobile phones one brother pressure in the channel inventory up to 50 million
Chinese mysterious female rich 560 million buy European luxury homes: the full amount of cash is paid at a time
Criminal gang candid courier list takes the money 8 people to be arrested
Do you make feed after Yi Lord? Zhenghong Technology M & A has mystery
Internal personnel have caused players to contradict? Netease "Yin Yang Shi": Impossible!
The first pop -up shop in the United States opened, Bubble Mart opened the North American expansion plan
The goose factory is finally making a move on the metasverse?
Big news! The police report henan village banks can not withdraw cash case, has captured a number of suspects
With this charging treasure that can legal "stealing electricity", I don’t worry about the mobile phone out of power
Tesla has lost nearly $600 million after the richest Chinese lost 89% of his net worth in the bitcoin crash
The most popular news this week
Huawei's mid-range phone Nova Y90 has been released overseas and will soon be available in China
The new MacBook Pro 13 -inch is now available at the Apple Store retail store
The largest professional wholesale market was granted an Internet payment license, and 449 million yuan became the actual controller of Fastlink
Huawei's Nova 10 Pro appears on Geekbench powered by Qualcomm Snapdragon 778G 4G
Apple updates the subscription management interface on the iPhone: the larger distance display is more detailed
Apple says its employees have reproductive health benefits but has been asked by lawmakers to investigate
The iOS 16 upgrade is no longer supported on the iPhone 6s
Apple M2 version of MacBook AIR July Sale: Magsafe Return
Activision Blizzard CEO Bobby Kotick kept his seat on the board
Apple's best-selling product is getting an update! New AirPods Pro Exposure: Heart rate monitoring, USB-C support