Canalys: in the third quarter, the shipment of wearable bracelets increased by 65% year on year, Xiaomi ranked first

Greater China is still the largest market for wearable bracelets, contributing 40% of global shipments, with a year-on-year growth rate of 60%. America, Europe, the Middle East and Africa (EMEA) contribute another 44% of global shipments. The Asia Pacific region (excluding Greater China) is still the smallest of the four regional markets, accounting for only 16% of global shipments, but the growth rate of the region ranks first, with an increase of 130% compared with the third quarter of 2018. The strong performance of retailers is one of the main factors driving the growth. 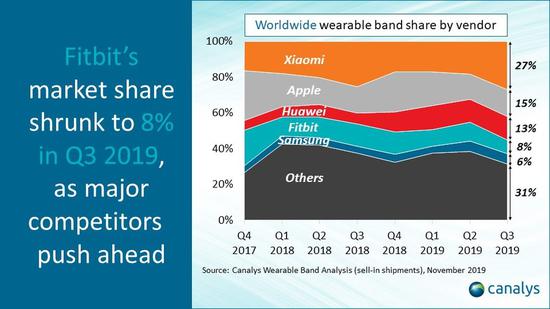 From a global perspective, millet bracelet is still far ahead, with the shipment volume reaching 12.2 million in the third quarter, up 74% year on year. Since the third quarter of 2015, driven by strong domestic market performance and active overseas expansion strategy, Xiaomi's global market share has reached a new high of 27%.

After milletapple, the highest year-on-year growth rate since the second quarter of 2017. Apple watch series 5, released in September, accounted for 60% of the company's shipments in the quarter, with new features such as dials and other self defining features that have been displayed. Since the end of last year, Apple has been expanding its production capacity to meet the growing market demand.