Recently, Microsoft has confirmed that it will switch the fast channel members to the active development branch (called RS? Prerelease). This means that the version updates received by windows insider members of fast channel will no longer follow the "twice a year" windows 10 function updates, but reflect the current development status. 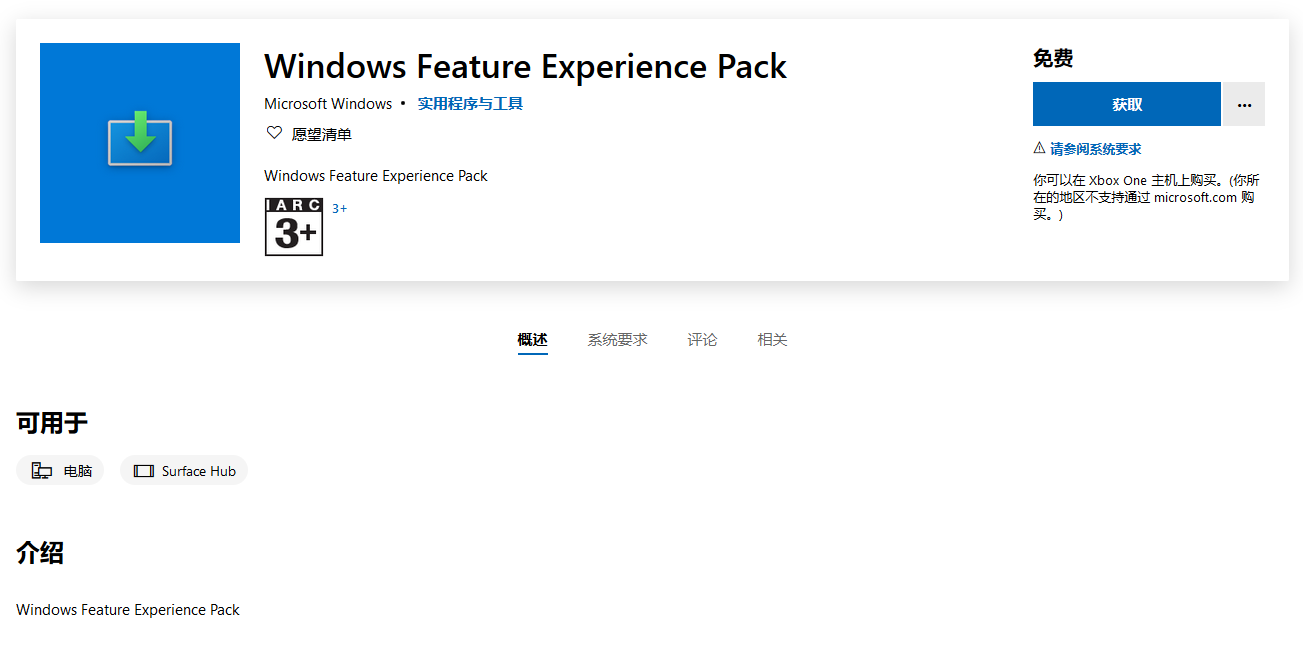 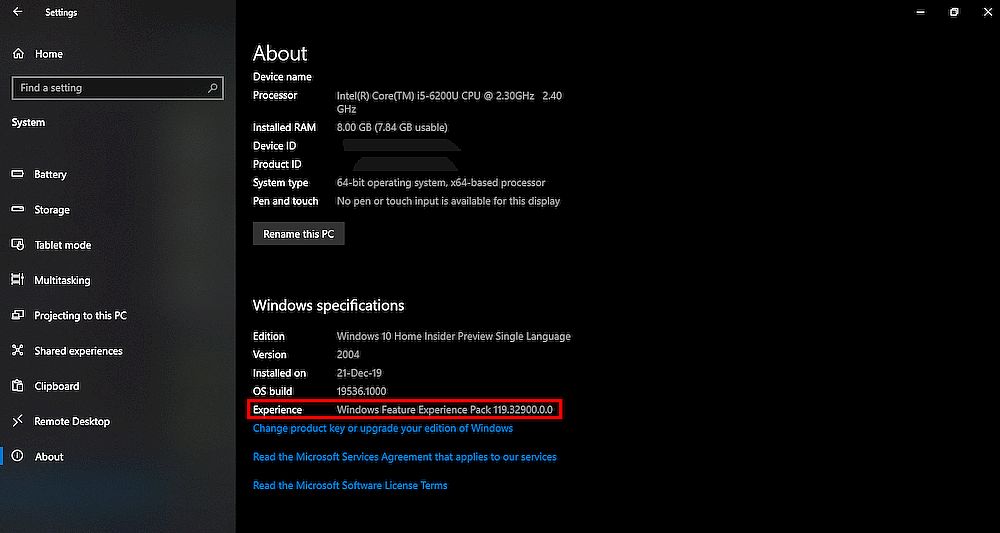 Although the app doesn't provide any useful information in the description, it uses the same "download" icon as the one used to set up the app's "about" section. And the windows feature experience pack is now displayed under the windows specifications of the settings application. And the version number is different from the system version, which is build 19536.1000 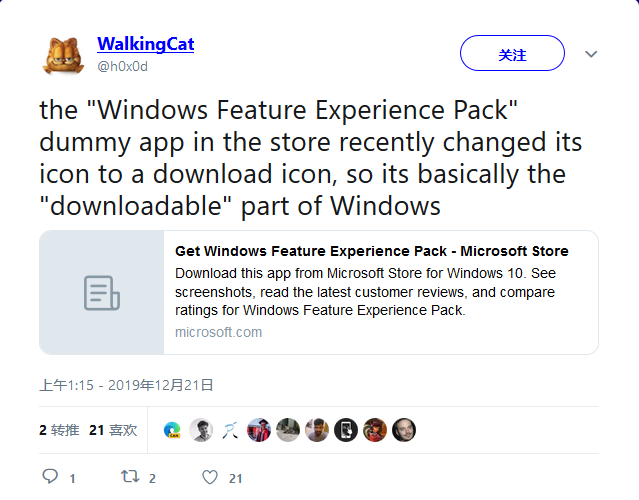 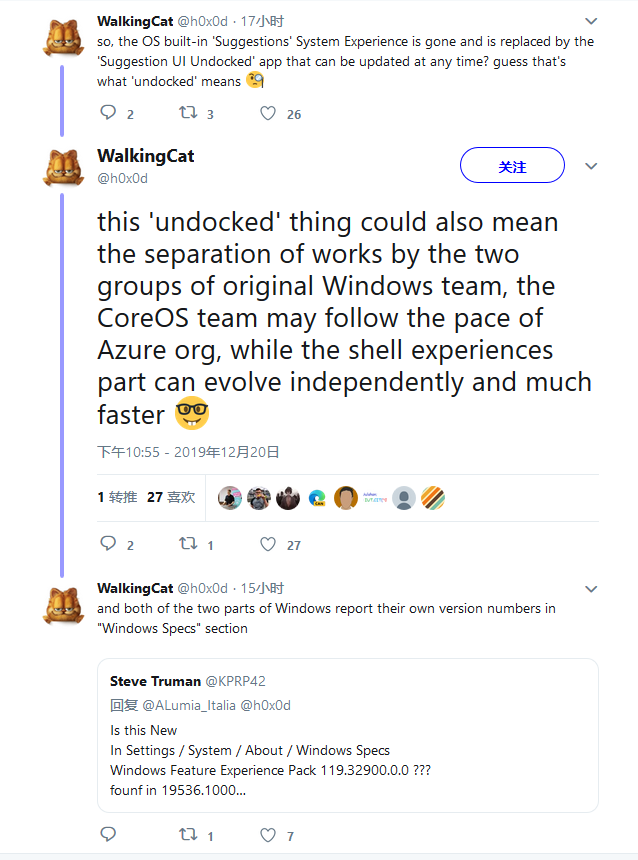 In a tweet, Walking Cat said Microsoft will make major changes to the shell features distributed to users, and it looks like Microsoft will provide a separate Shell experience. This means that companies may be system-independent, make it easier to add / remove new features and improvements, and do not need to launch blockbuster operating system updates.

At present, the technical details and specific launch time of this work are not clear. But the news is true, which means Microsoft can separate windows core OS and shell experience. In this way, without major system updates, Microsoft can provide consumers with new functions faster. This may also mean that windows 10 may get a condensed version with additional features.

Related news
Microsoft agent application To-Do officially login to macOS
The new edge will be officially launched through windows updates next month
Microsoft is expected to separate windows coreos and shell experience to speed up updates (Figure)
In the future, new windows 10 features are expected to be distributed faster independent of the system (Figure)
CoreOS Container Linux announces it will end its life cycle
Hot news this week
The developer of the dating app Tinder has reached an agreement with Google over billing rules for its app store
Still did it! Canada has banned Huawei and ZTE from participating in the country's 5G network on "national security" grounds
Red Elf Lightning erupts in the Himalayas Spectacular Spectacle: Experts Reveal What Exactly Is This?
The founder of the Internet Quick Hand Su Hua was taken away for investigation, and the fast hand responded: the news was not true
Wang Xiang, president of Xiaomi, explained that a shortage of low-end chips is a major challenge in overseas markets
Or for Studio Display Pro, the release of Apple's 27-inch Mini LED-backlit Display has been delayed by October
Tencent Q1: The business service business has "slightly decreased" year -on -year, and resource centralized video cloud and network security | View financial report
One picture to understand! Blue Factory has issued 3 new machines in a row: self-developed chip blessing, the narrowest lower border
Sony released the active noise-canceling headphones WH-1000XM5, equipped with 2 chips and 8 microphones
Tencent established a smart technology company in Chengdu, and its business scope includes Internet data services
The most popular news this week
Xiaomi's first Leica flagship! Xiaomi Mi 12 Ultra's latest appearance map: the screen ratio is amazing
The founder of Xiaopeng Auto! He Xiaopeng uses "Keda Duck" to ask for help online
Not afraid of merchants "first rise and then fall"! 618 Taobao launched a new feature: one-click refund of the price difference
How does the Internet make People Copy each other
Fed Vice Chairman: The future digital dollar may complement the coexistence of stablecoins and commercial bank currencies
ZHANG Pingan, CEO of HUAWEI CLOUD: The value of data governance in China has not been fully tapped Data and AI should be accelerated
Shenzhen Atmosphere! The sales price of mobile phones, computers and other products is subsidized by 15%
Microsoft shows third -party components: Win11 chicken rib function is saved
No need to grab it! Sony announced an increase in PS5 shipments
Audi advertising poster photos only sell for 8 yuan? Photographers question the unreasonable use of the photo purchase