Intel has maintained a high level of confidentiality since the announcement of the Xe solo project. Previously, the company has gained a lot of market share through the "core graphics card" integrated with CPU.Looking to the future, Intel also plans to attract entry-level games or enthusiasts through its first dedicated graphics processing unit (DG1).Interestingly, this has been strongly suggested in the documents leaked by the Eurasian Economic Commission (EEC) recently. 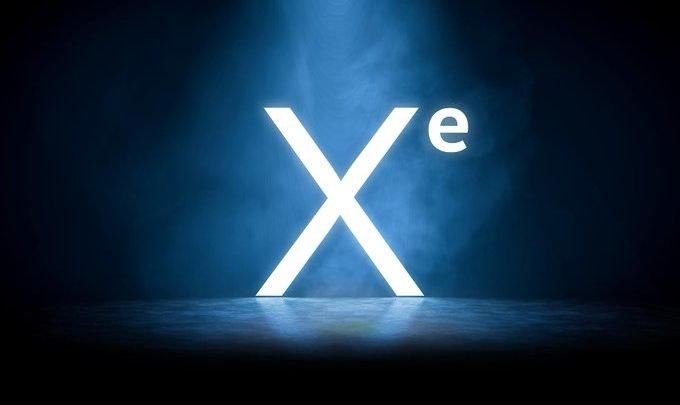 It is said that one of the major features of the Xe architecture is that it can be extended to mobile and desktop platforms. This means that Intel will not redevelop another architecture specifically for mobile GPU, but will consider both desktop and mobile platforms at the same time. 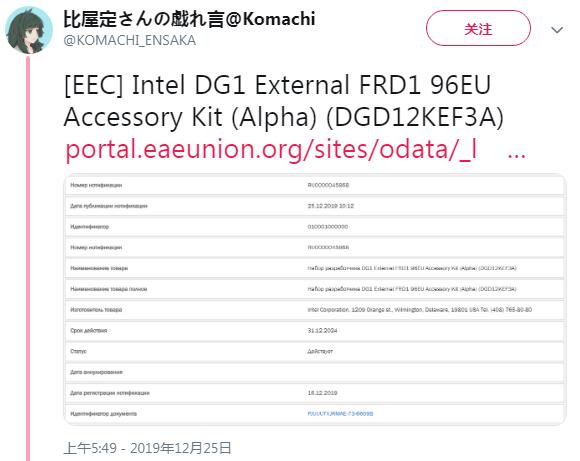 In the documents leaked by EEC, it can be seen that Intel Xe DG 1 has 96 execution units (EU), which is expected to be officially announced soon.

In fact, Chris pirillo, Intel's chief community advocate, confirmed this in a tweet. The negative rumors that the product, which is still in the experimental stage, has encountered many difficulties and may even be cut off, have been denied. 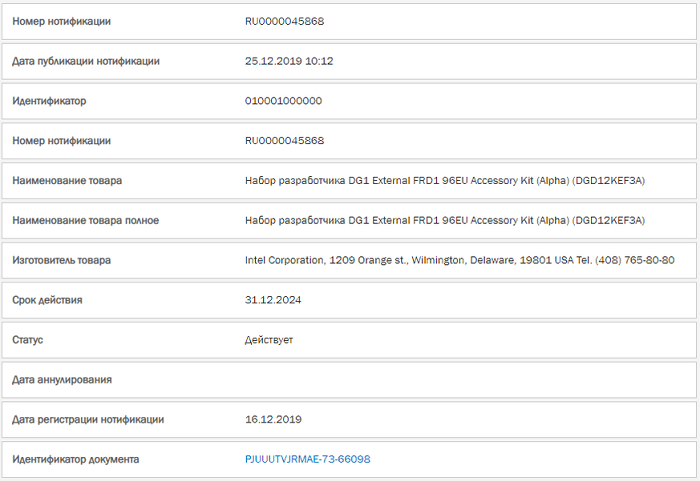 Interestingly, there are reports that Intel will continue to launch DG2. In view of this, the naming method of "DG" series is likely to be just a temporary placeholder, and the finished product is likely to be changed to another name.

If Intel retains the same design principle for DG1 as its mobile HD / UHD Graphics core graphics card, consumers are expected to usher in 96 × 8 / 768 coloring units. 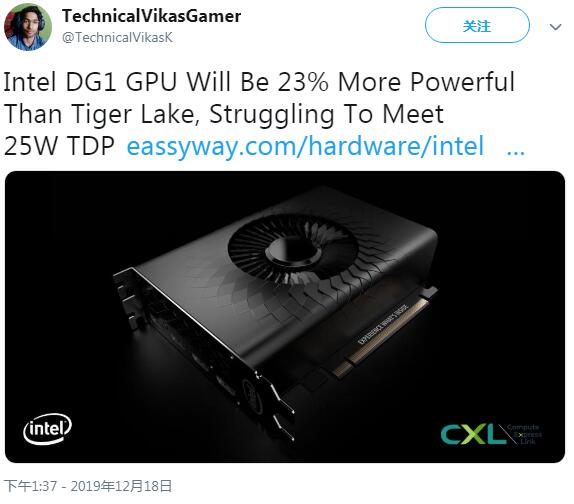 Given Intel's first unique positioning entry level, it is unlikely to have 96 × 16 x 1536 coloring units. In addition, Intel Tiger Lake chips are said to have 96 execution units (based on Gen12 Xe Graphics).)

Recently, it was reported that the DG1 GPU with a thermal design power consumption of 25W has a performance improvement of 25% compared with tiger Lake chip, and Intel is expected to adopt attractive pricing, which will help it quickly seize the entry-level market.

Related news
EEC documents indicate that Intel's first DG1 is expected to quickly seize the entry-level Market
CES 2020 Intel releases several heavyweight products: single display DG1, foldable screen device, automatic driving scheme
Intel DG1 Unique Performance Rundown Exposure: Close to NVIDIA GTX1050?
The Linux 5.10 kernel is ready to support Intel DG1 audio output
Intel Xe DG1 GPU has been shipped and will be on sale this year
The Intel DG1GPU will be loaded into separate desktop cards next year for the OEM market
Intel graphics driver officially supports DG1, showing that cyberpunk 2077 no longer crashes
Intel introduces DG1 graphics card based on 10nm superfin for OEM
Intel DG1 desktop independent graphics card for the first time: comparable to hd7870 nine years ago, power consumption is only 1 / 6
Hot news this week
"GTA6" was stolen by a hacker without being released. How can the game company defend the source code?
The new rules of Internet popover will be implemented on September 30, and the chaos of "bully screen advertising" is expected to be eradicated
Google is shutting down its Stadia cloud gaming project, with the developers involved saying they had no knowledge of the plans
Brother sent a mobile phone to pay 200 yuan to pay the owner to the police: money is not scraped by the wind
Mate 50 Kunlun version is in short supply! Huawei additional production capacity: October supply can improve
IPhone6 officially "retired", its series sold 250 million units, second-hand purchase price is now as low as 100 yuan......
After a lapse of 28 years, the Chinese women's basketball team won the World Cup runner -up Li Meng's T -shirt on fire
Woman addicted to 'A Sheep' husband worried about being cheated to report for help: official confession
Apple responds to the iPhone accident monitoring cannot be triggered 100%: no minimum requirements are met
Meituan Wang Xing: Chinese auto companies will definitely win, "NIO, Huawei, ideal" will replace BBA to occupy the high-end market
The most popular news this week
Girls walk to play mobile phone hit telephone pole forehead bulge: hope friends learn a lesson
The Snapdragon 8 Gen2 flagship of the Year is here! The standard battery may not even be 4000mAh
Boot up is the new high-end flagship of Android 13 first look: performance is crushed by iP14
Are you enough? Microsoft announced that all compatible users can upgrade win11 2022
American Infrastructure Revival 8000M Fiber Broadband: The same speed, unlimited upward speed, unlimited
Brazil approves Activision-Blizzard deal
Apple doubles U.S. manufacturing: mostly small-scale test production, only Mac Pro assembled in the U.S.
EPIC CEO Angry Apple App Store price increase: Apple is like a landlord, developers have nowhere to go
Xiaomi Group: $ 117,000 repurchase 4,800 shares shares shares
Sub -iPhone 14! Huawei New Machine Release: Snapdragon U Blessing