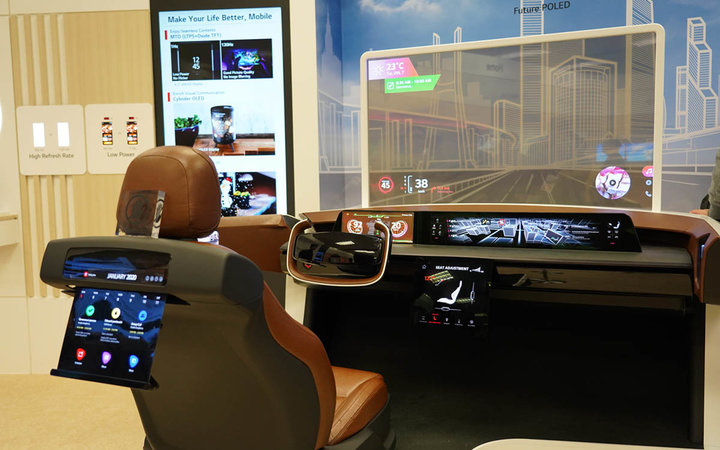 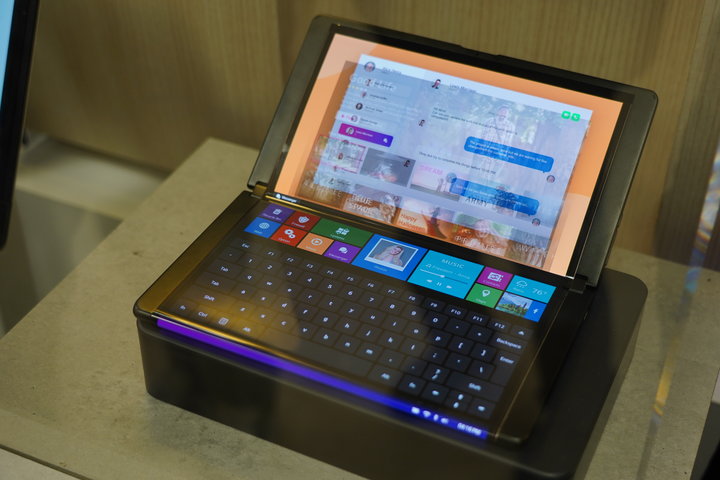 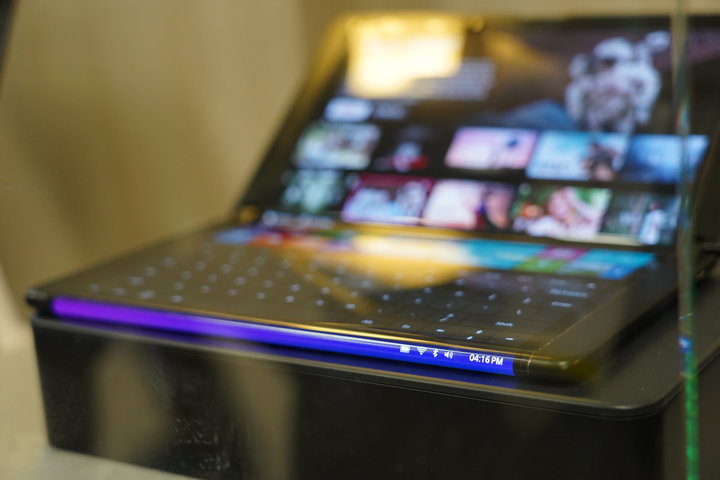 In addition to portable devices, LG display focuses on the field of large screen, including building the first-class space of aircraft through OLED screen, using transparent display as information display board and partition. 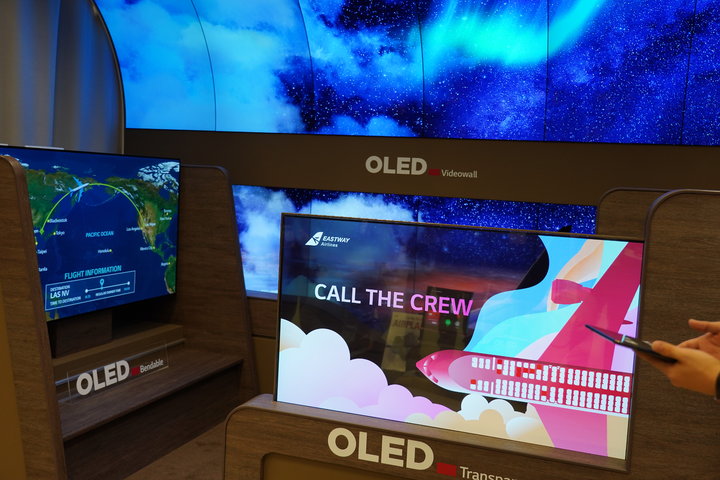 Previously, LG display has launched a curlable OLED TV. This time, LG display changed the curling direction and introduced a 65 inch UHD roll down OLED TV. The TV can be hung on the windowsill or indoors like a curtain. When in use, it will slowly fall down from the top, and when not in use, it will be put away without blocking other objects. 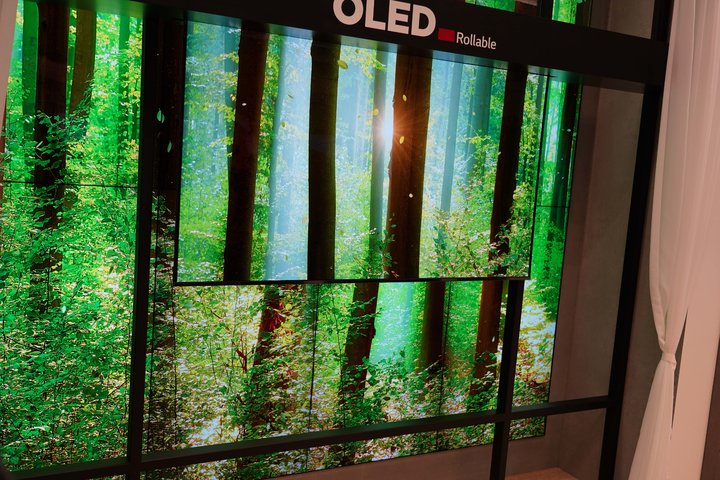 In terms of commercial applications, LG display also shows us the application scenarios of the display. LG display has developed in touch technology, which enables the touch sensor to be built into the display panel. With different screen products, different functions can be realized, for example, with transparent OLED, it can be a commodity window. 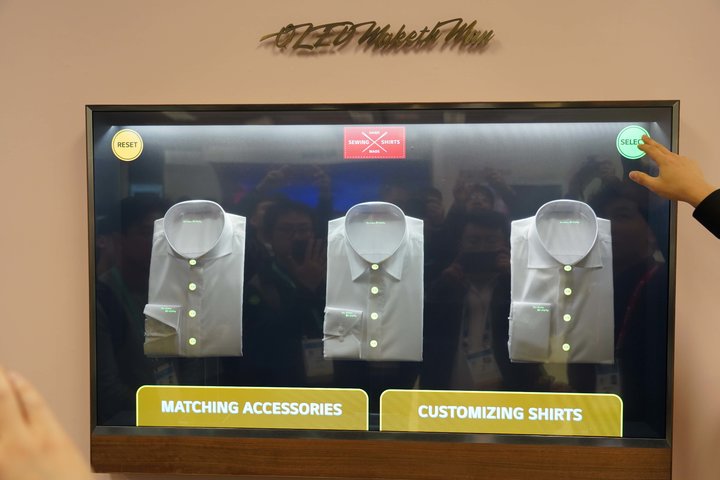 In addition to the use of OLED indoors, the easy-to-shape OLED can also be used in automobiles. LG display also displays the vehicle mounted p-oled display products that will be officially mass produced in 2020. 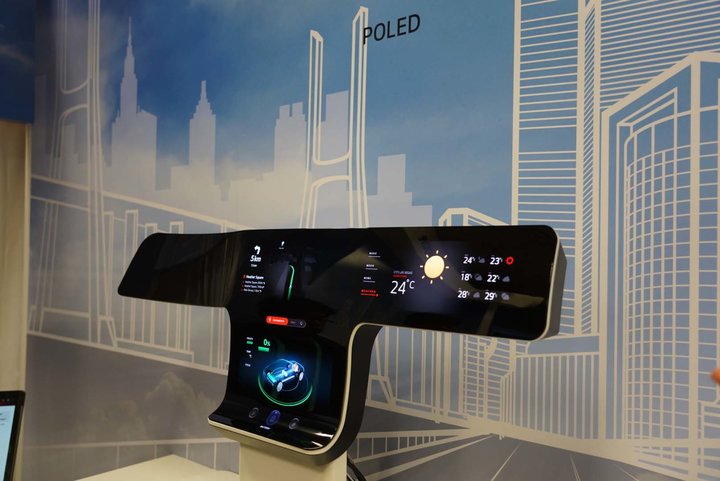 As you can see, LG display integrates the 14 inch instrument panel screen with the information display screen and the control screen, which are packaged under a complete glass. These three displays are not flat, but show a natural surface.

In addition to the application in vehicle central control and instrument system, LG display also developed a transparent OLED display screen, which can display simple road condition information and navigation guidance information in front of the windshield, and the effect is similar to HUD. 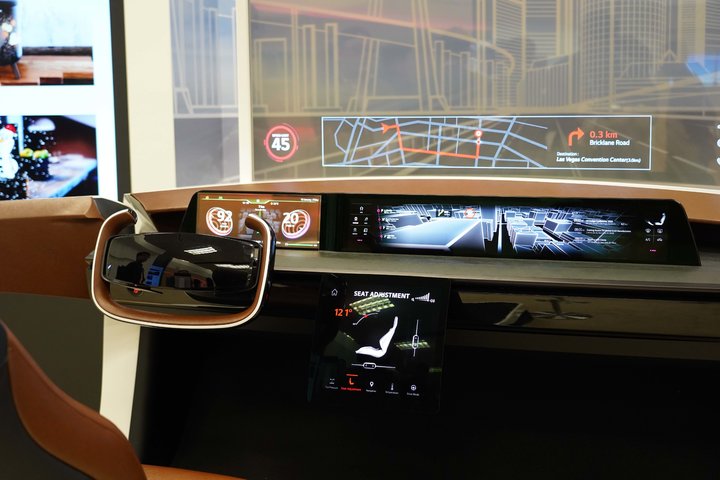 The rear seat is also equipped with a crimpable OLED display, which can be folded up when not in use and placed in the space behind the bolster. 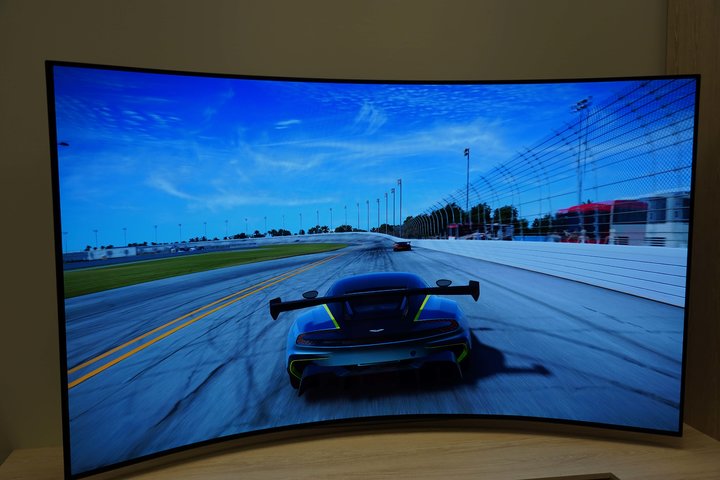 At present, OLED screen has been gradually popularized in smart phones. With the further maturity of technology and process, we will see a large number of OLED large screen devices on the market.

Related news
LG Display displays transparent OLED display in Harold Department Store window
LG display focuses on OLED and LCD fields to show future screen applications
Better than OLED! Samsung Strong QD-OLED Development
LCD lost Samsung, LG and other Korean factories worried about OLED's failure
Can TVs also be "invisible"? LG Display intends to launch a transparent OLED TV
Hot news this week
Biden signed a chip and scientific bill, a video call of WeChat iOS internal test suspension window, the advanced CPU caused Win11 to be difficult to use, Huawei new machines enter...
How to regulate the "broken card" operation to crack down on electrical fraud to prevent "accidental injuries" with cards?
Musk's eyes! Lei Jun released a full -size humanoid robot Xiaomi self -developed strength explosion table
iPad 10 will be absent from iPhone 14 conference: October appeared on Apple's last non -comprehensive tablet tablet!
The three major indexes of the US stocks opened sharply: ROBLOX fell more than 4%, Twitter and Tesla rose more than 3%
Kuaishou TOB business Yu Bing: Self -developed chips or mass production after the end of the year, the video must be turned into light industry
Meizu Pandaer Great: All products are reduced by 200 and 30 -containing mobile phone cases, heat dissipation back clamps
The global streaming media have increased the animation circuit is becoming a new "breakthrough" for Youaiteng
After selling Tesla for $6.9 billion, Musk said he was not selling it, but a survey said he was still selling it. The title of the world's richest man may not be guaranteed next ye...
Distributed database OceanBase announced 4.0 product release, single -machine deployment performance is super mysql
The most popular news this week
AMD Zen4 Ryzen Ultra HD: The Octalus
A PC processor more advanced than AMD's 5nm Zen4 is going to be a chip: Intel is jealous
First time in Shanghai! One billion electronic vouchers are coming: Alipay and wechat are available
The survey shows that nearly half of the US Android users consider changing Apple iPhone
New bottle of old wine! Industry insiders: No one has the best cost control than Apple
Amazon requires US regulators to withdraw votes: bypassing the company's harassment of Bezos to disturb operations
Pet dog infecting monkey acne suspected "Human Poor" American CDC Reform Control Guide
Space Launch System to Fly for First Time
Tencent's second-quarter net profit fell 56% from a year earlier to 18.6 billion yuan
Fabless customers cut back on chip orders affecting Q4 capacity utilization