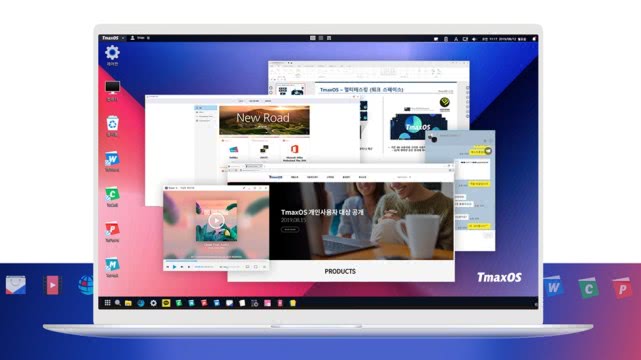 Small and medium-sized Korean companies such as Tmax, Hancom and Invesume have developed their own operating systems based on Linux. Linux is a fully free operating system that is widely used on servers in data centers.

Executives at the software companies said they would see the end of Microsoft's support for Windows 7 as a huge opportunity and try to encourage users, particularly government agencies and private companies, from Windows to Windows

They claim that compared with Windows 7, which no longer has software updates, their own operating system has great advantages in network security and low cost. They also stressed that if they use their operating system, users will not have to switch to windows 10, which can save a lot of money.

Their efforts to capture market share from Microsoft are consistent with the South Korean government's policy of nurturing the local software industry, all aimed at avoiding heavy reliance on the US company's operating system.

In 2010, a year after the launch of windows 7, microsoft accounted for 99% of the market. But the 2019 figures appear to provide a more viable alternative for local software development companies

In local software companies, Tmax is promoting its Linux-based Tmax OS and offers a range of promotions, such as issuing technical maintenance coupons and discount coupons.

For non-commercial users, tmaxos is free, but the company charges licensing fees from government agencies and companies. Tmax has signed more and more new contracts as Microsoft terminated technical support for Windows 7.

the gureum platform, developed by the korean national security institute (nsri), is an open source operating system. About 30 local companies have joined the platform. Hancom joined the project in 2015.

The executive added that the gureum operating system is mainly used by government agencies such as the Korea Institute for the promotion of marine science and technology, Korea post, the Korea Naval Academy and the Korea national police.

In 2014, the South Korean government developed the operating system with a view to reducing its heavy dependence on Microsoft. Invesume has been responsible for providing users with software updates and technical support.

However, an executive at an IT company in South Korea said it would be difficult for local companies to increase their share of the operating system market because people have been using the windows operating system for too long, and some popular applications such as games can only run on the windows system.

Related news
Can windows 10 wash white? The active version of win7 / win8.1 can still be upgraded free of charge
Microsoft will stop support immediately! Report: win7's domestic share is close to 60%
"Retirement" utilization rate of win7 still accounts for 60% of Tencent's safety and continuous protection of user safety
Google promises that the Chrome browser of win7 platform will be maintained for at least 18 months
Win7 Officially Retired Today Win7 Time Guarding Plan after Tencent's Safe Launch
N more Linux distribution version grabs win7 stock users: don't upgrade win10
Hot news this week
Challenge the fierce rival Intel amd Su Zifeng: This is just the beginning!
Musk is going to blow up the rocket tomorrow
Huawei mate XS Ministry of industry and information technology access: equipped with Kirin 990 5g, better hinge / screen
Can't OEM 16nm chips for Huawei? TSMC: hard to estimate but ready for changes in export control at any time
Samsung Galaxy a71 5g exposure: equipped with exynos 980, square four shot
Magic mobile phone protection shell, match 20 Pro for sale, match 30 Pro for second change
NetEase cloud music and station B could be the only two accidents
Unsealed Taobao account in 980: no malicious refund
Samsung Galaxy a71 5g exposure: cheap "note10" with exynos 980 and square four shot
TSMC denies being pressured by the us to set up factories in the US: there is no final decision at this stage
The most popular news this week
NetEase cloud music and station B could be the only two accidents
President of Xiaomi International: Xiaomi still wants to enter the US market dominated by apple and Samsung
Over 80 million yuan of contract has been awarded to golde infrared for the application of self-developed chips in the prevention and control of pneumonia
Huawei Developers Conference Announces Extension: Change to Live Online as a New Pneumonia Epidemic
Microsoft chromium edge stable edition ushers in the "new tab" after function improvement
Huawei P40 Pro toughened film spy exposure: the effect of increasing screen curvature is worth looking forward to
DxOMark announces iPhone 11 score: 109 points, just equal to Huawei P20 pro of the year before
Google and Mozilla are sending cake to Microsoft's new edge team
Samsung Galaxy S20 series is expected to debut on March 13: simultaneous exposure of price information
Google released the most powerful 1 / 3 brain map of Drosophila, with 25000 neuron connections accurately located!