SSD market, looking for an SSD in line with their own budget is no longer difficult.

But on sales, has always been cost-effective middle-end SSD is more dominant, large capacity cheap everyone loves.

This evaluation of the western data WDBlue SN550, is the upgrade version of SN500, model 50, how much performance will be improved?

The western data SN500 has become the real incense dish in the SSD of the installed market, and the activity price of about 380 can take the 500 GB version. The performance is good, the fever is not big, closes the eye to buy without consideration. 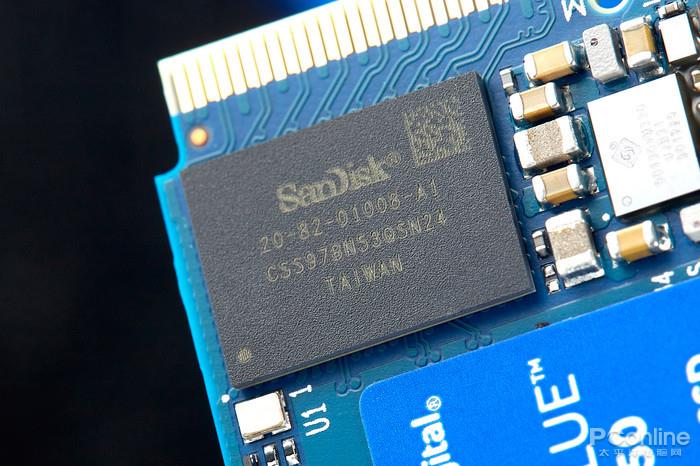 The focus of this sn550 upgrade is on its main control and flash memory particles. The number of channels is upgraded from the original PCIe gen3 X2 to PCIe gen3 x4, which complement each other, so that the sequential read speed is 2400mb / s, and the random read speed is 410k IOPs. The performance improvement is very obvious.

In terms of capacity, the Western Data WDBlue SN 550 added a new version of 1TB capacity on the basis of the original 250G,500G, to choose more and more adapt to the current SSD market environment. 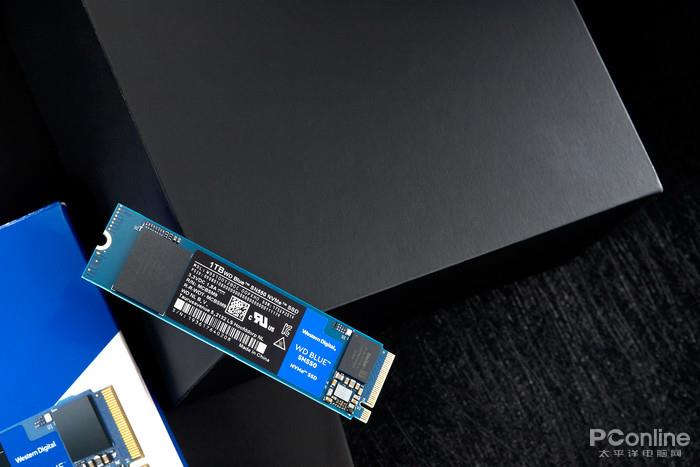 In appearance, WD blue sn550 adopts this series of very representative blue PCB design and standard 2280 specification design, which can be well compatible with most desktop and notebook platforms. 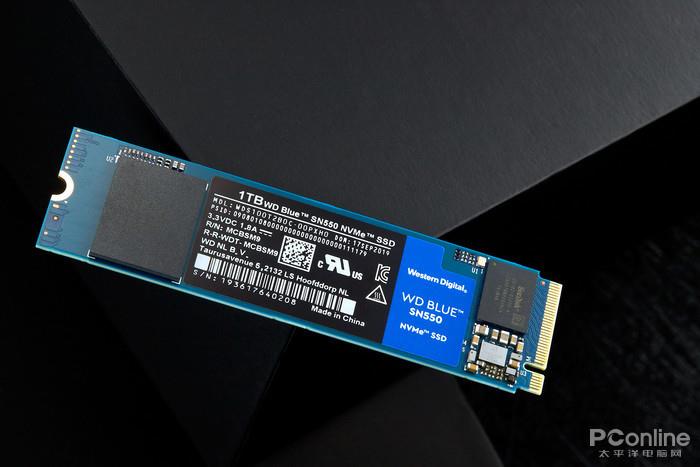 The western data WDBlueSN550 adopts the single side particle layout design, different from the old model SN500, the western data WDBlueSN550 has been improved on the PCB layout this time, and the NAND flash memory particles have been placed far away from the main control, thus effectively avoiding the phenomenon of centralized heating and avoiding the phenomenon of overheating. 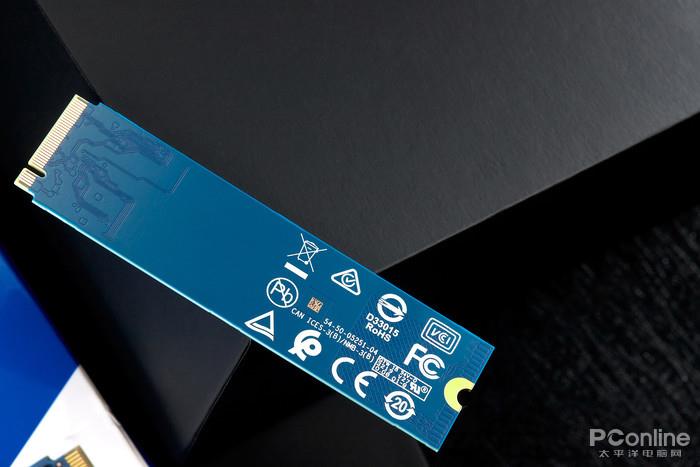 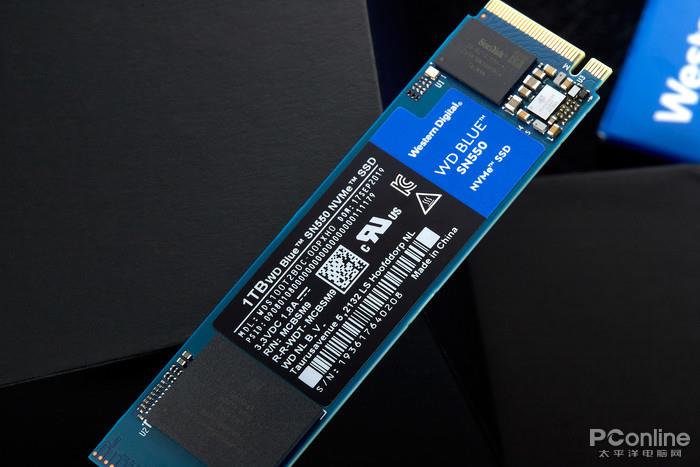 Next to NAND flash memory particles is a label with detailed information of SSD, including series name, production model, capacity, origin, etc.

From the above we can see that we tested the 1TB version this time. 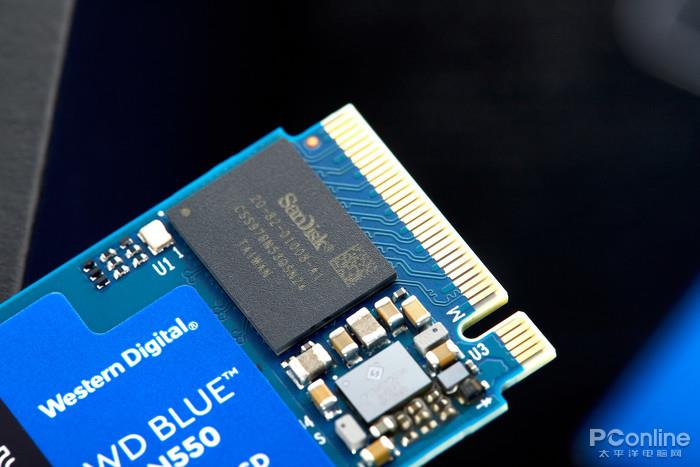 Western data WD blue sn550 is equipped with DRAM less master control developed by western data, and does not use external cache.

Using HMB technology instead of external buffering can speed up SSD through host memory without DRAM, improve read and write performance, and achieve performance experience comparable to SSD with embedded DRAM.

Because this technology reduces the cost of external cache, the price performance of this SSD is very good.

However, it should be noted that HMB technology has certain requirements for the system version, which can only be used when the system is over win 101703. Only in this way can SSDs play the best performance.

If your computer uses win7 or other systems, you can't use this technology to speed up, which could affect the speed of the ssd.

In terms of flash memory particles, SanDisk's 96 layer 3D NAND flash chip is used. Thanks to multi-layer stacking, the whole PCB only relies on one NAND flash particle to achieve 1TB capacity.

Official software experience: complete information, easy to use in the background 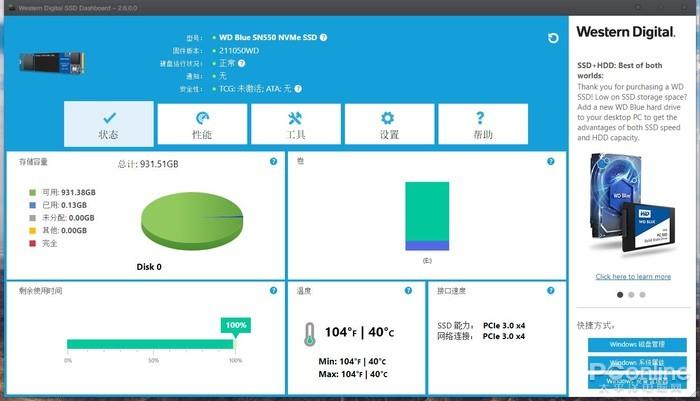 WD SSD dashboard is a hard disk management software created by western data for WD blue sn550. Through this software, we can clearly see the capacity usage, partition status, remaining service life, actual temperature status and interface speed of the hard disk. The overall style is simple and very intuitive. 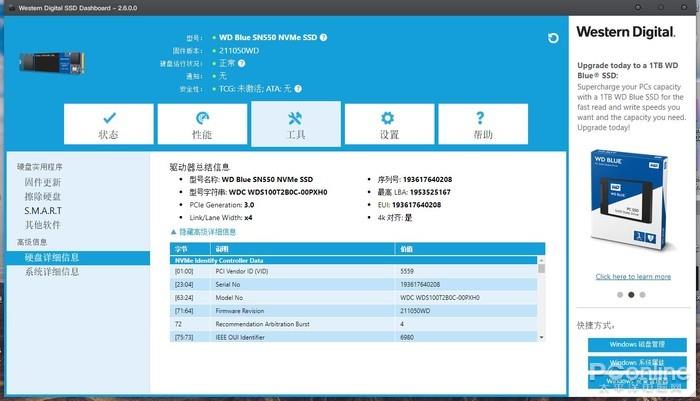 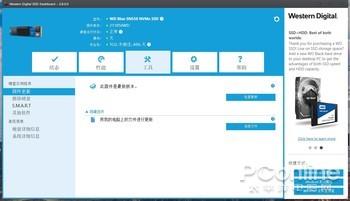 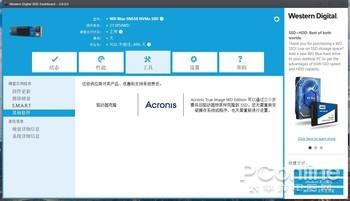 Most of the SSD testing projects are new versions of the software, including CDM 7.0, ASSS Benchmark 2.0, Anvil Pro, etc. 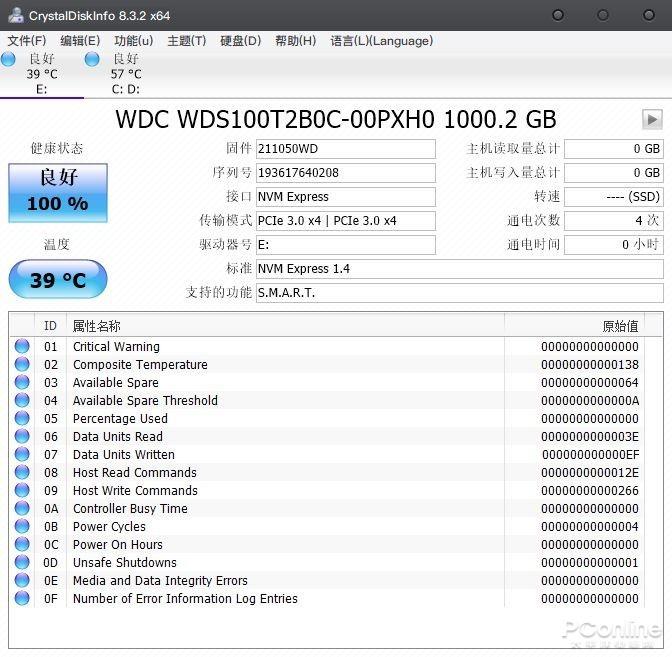 The operating status of the SSD can be roughly understood through the crystal diskinfo software. The western data WD blue sn550 1TB SSD has a firmware of 211050wd, adopts PCIe 3.0 x 4 channel and nvme 1.4 standard.

Stable after 10 minutes on standby

AsSDSD tests combine CPU performance scores, so it's normal to measure speed a little lower than official nominal and actual use. 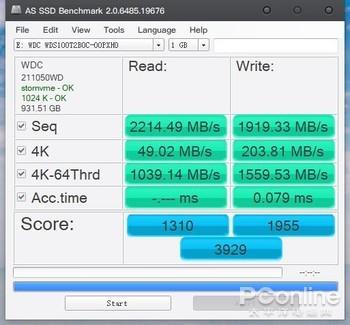 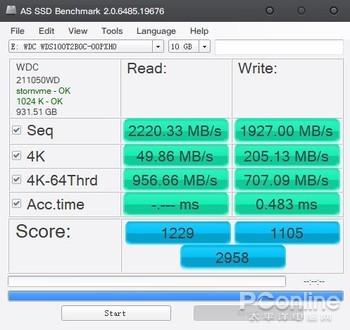 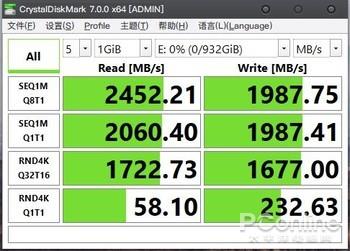 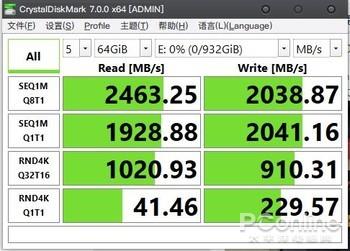 After updating the new version of the CDM, you can choose the size of the 64GB file for testing, and the speed of sequential reading and writing in the test of the 1GB file has reached 2452.21MB/s、1987.75MB/s4K Random Reading and Writing Performance 58.1MB/s、232.62MB/s。

When the test size increased to 64 GB, the random 4K reading performance decreased. But still above 40MB / S, write speed does not change.

The sequential reading and writing speed remains the same as the official nominal speed. 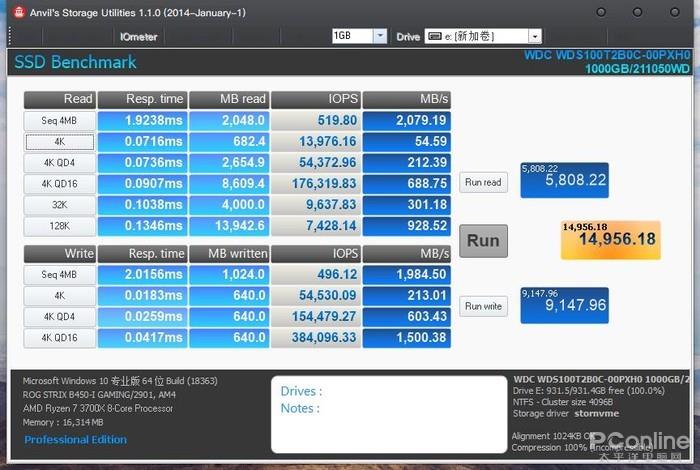 whereas the western data WDBlueSN5501TB SSD total score of 14956.18. As far as results are concerned, there is little difference with the previous test software. 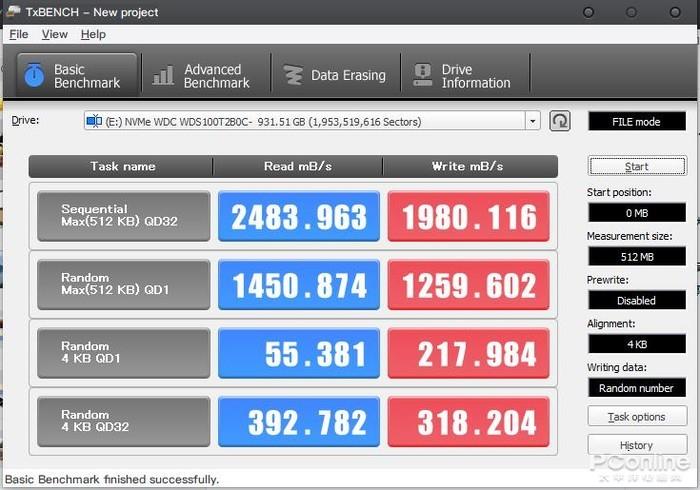 To test the true face of SSD, it is necessary to measure the slow external read-write speed. What are the current partners afraid of when buying SSDs? Lose speed.

TLC has become a foregone conclusion, not much is fine, once dropped with the mechanical disk, then the SSD is no different from not buying.

In the HD tune file benchmark, we set a custom file write volume of 100GB, easily crossing the critical value of the cache, eliminating the acceleration of the product cache, and measuring the real performance of this product particle.

In the test, when the write data reaches about 12gb, the write speed of WD blue sn550 1TB SSD of Western data will drop from about 1900mb / s to about 800MB / s, but even so, its speed is still much faster than that of traditional solid-state SATA.

Given the actual scenario, the day-to-day is rarely written to large-volume files, so the cache capacity is sufficient for the general consumer experience.

After a period of testing, it can be seen from crystal diskinfo that the SSD temperature has reached 58 ℃ at this time, and it has not reached the stage of overheating, so even without heat sink, this SSD can have relatively stable performance, and the notebook can be easily used.

Folder copy test by copying a folder containing large and small files to test the speed of transmission stability and drop speed node, we use the game "fate 2" folder for file copy test, this test file size about 85 gb. 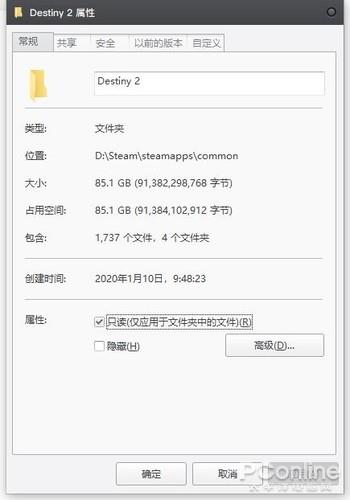 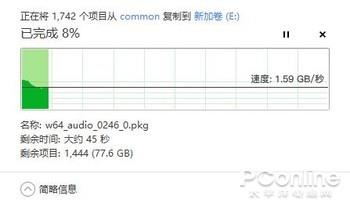 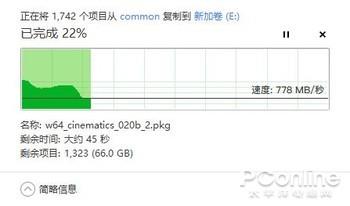 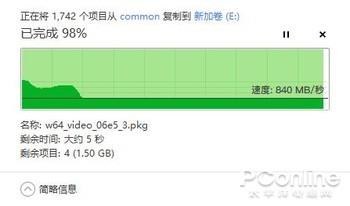 In this copy test, data copy to around 17GB will be the hard disk cache write and drop speed, than the HDTune test out of the 12GB drop speed node, followed by a speed of about 800MB/S to copy the following file, slow external speed and HDTune test results are roughly the same.

Western data WDBlue SN500 has been in the middle-end SSD market for nearly half a year, development

However, in the face of new products from friends, some can not resist, sn550 is to alleviate this situation. 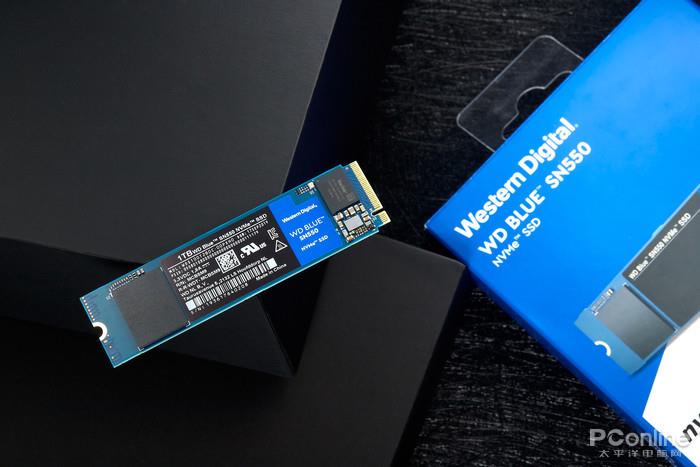 WDBlue SN550 has hit the mid-end SSD market at almost the same price at the end of the year, with a 40% higher sequential reading and writing speed than SN500, and 600TBW (1TB version, the rest as with SN500) with a five-year warranty is already very lethal relative to the same positioning product.

Related news
Western Data WDBlue SN 550 Start: doubling bandwidth No increase in volume
One plus surpasses Samsung apple to become No.1 in India's high-end market!
Tencent's "big killer"! Start cloud game preemptive experience: low PC configuration can also play
Tencent START Cloud Games will no longer be given free of charge every week from September 26
Hot news this week
Sources say Penguin Random House's deal to buy Simon & Schuster has fallen through
Any chance of taking over the agency? Sources say Tencent has been in contact with Blizzard for at least a year
Blizzard's founder responded to NetEase's contract renewal: Cooperation is a two-way street, and we will do our best to make Blizzard games accessible to Chinese players
Ali suddenly released a new chip, the domestic chip breakthrough, abandoned the American chip fantasy
Better than Huawei or Apple? It is revealed that Samsung S23 uses satellite communication: can also space voice
Players recognized as the best of the year! The Old Man Ring won four awards at the 2022 Pension Rocker Awards
According to sources, TSMC replaced Samsung to win a large order of Tesla's assist driving FSD chip, based on the 4/5nm process
Today is the 18th anniversary of Blizzard's World of Warcraft: unfortunately, the national service will be discontinued in January
Jinshanyun reported revenue of 1.97 billion yuan in the third quarter, down 18.4 percent year on year
Xiaomi Q3 has not returned to the normal growth track. Wang Xiang: The idea of high-end strategic quick wins is incorrect
The most popular news this week
China AVS3 video, audio standards rise! 8K/4K/ mobile for the first time
AMD ripper is finally not lonely! Intel Fever U returns to 56 core hard carry 64 core
The price of Xiaomi 13 to 4,500 yuan has sparked heated debate among netizens: Should you buy Xiaomi at more than 4,000 yuan
Thunder online game accelerator announced that it will be officially suspended on December 1
With the NIL technology, Canon wants to provide China with a lithography machine comparable to the EUV
Wechat iOS version 8.0.31 private test update: Added the function of dragging pictures and videos to send with one key
AMD Zen4 12 core price record low! The cumulative price drop is 20%
Priceless metal is thrown away: One million scrap mobile phones can recycle 68 kilograms of gold
The world's first 6GHz! Intel's "Ashes Edition" arrives early: You're out of the sky
SONY loosen up! PlayStation's multi-year super exclusive is coming to PC