At the CES exhibition earlier this month, amd officially released the Reebok threadriver 3990x processor,This is the first desktop 64 core 128 thread processorIt also sold for $3990 and officially opened on February 7.

If you look at the parameters of the processor, the Ruilong threadriver 3990x is really too luxurious. It has a 7Nm zen2 architecture, not only 64 core 128 threads (eight CPU dies plus one IO die), but also a total of 288mb cache, including 32MB for the second level cache, 256MB for the third level cache, 2.9ghz for the reference main frequency, 4.3ghz for the maximum acceleration, and 280W for TDP. 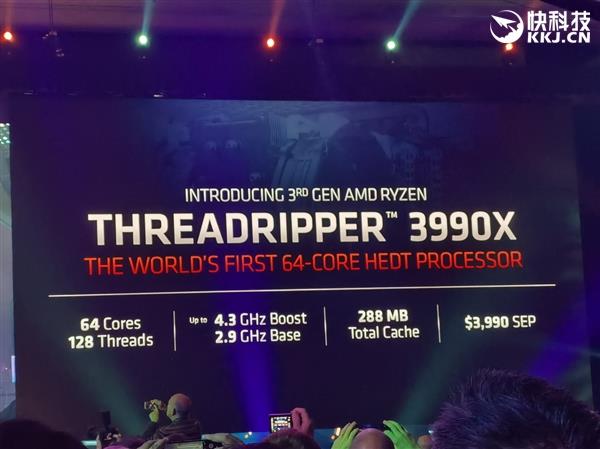 64 core 128 thread processor can be willful if it has many cores. Running a score at will will will crush the opponent's level. Cinebench R20 multithreading can run 25399 points,About five times the 8-core 16 thread core i9-9900ks。

However, playing the game with the Reebok threadriver 3990x is a bit wasteful, although it has not been measured yet,But compared with core i9-9980xe, the 32-core sharp dragon threadripper 3970x processor previously announcedThe 32-core is only 4% ahead of the performance, and the 64 core Reebok threadriver 3990x may have lower game performance because of its lower acceleration frequency.

How to persuade gamers to accept a processor like the Reebok threadriver 3990x? The answer is that it's very difficult for 24-core to 64 core processors to play multi-core games under the limitations of current game technology. Amd knows that it's impossible. If Intel has 32-core or 64 core processors, it's the same problem.

This direction is not good. Let's look for something else. Amd CEO Su Zifeng also talked about the Reebok threader 3990x processor in an interview recently. She said that the introduction of this processor is not for show technology, but for actual needs,Current video creators can take advantage of 64 core processors, especially 8K video processing。

There is also an area for multi-core processors such as the Reebok threadripper 3990x,That is, the programmer compiles the program, and the compiler has high requirementsCan also play multi-core games.