In view of the development trend of open source public copyright, whitesource, a software license management tool enterprise, has made new discoveries.currently popular license agreements, including gnu-led gplv2, gplv3, lgplv2.1, and loose licenses such as mit and apache 2.0. Its characteristic is that the software can be more or less operated without the prior permission of the owner to accelerate the promotion and popularization of related products. 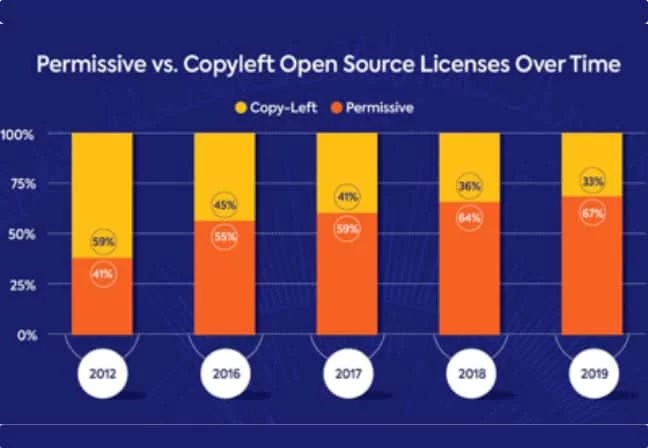 (from: whitesource, via the register)

Persissive MIT and Apache don't have to undertake the corresponding obligations, and GPLv2, GPLv3 and LGPLv2.1 convey similar freedoms. Simply put, users are not allowed to publish restricted derivative versions.

In 2019, 33% of software relies on the copy left license, and 67% of software tends to some kind of permission open-source license, an increase of three percentage points over 2018.

This is consistent with the copy left trend observed by GitHub in 2015.David habusha, vice president of whitesource products, said in an email to the register:

The Free Software Foundation created the copy-left license in 1985 to ensure that then evil companies could not use open source software and restrict its redistribution.

In addition, in modern application software, the utilization rate of open source code has reached 60-80%.Even contrary to the freedom of such licensing, start-ups tend to build businesses around specific open source projects, as well as rely on software to withstand competition.

The controversy is mainly reflected in the excessive pursuit of monetization of open source projects, without giving the open source community due feedback. In the past 18 months, some companies have changed their licenses to prevent this trend from continuing.

Unfortunately, these remade permits are not well recognized.

For example, the Commons clause of redis labs restricts cloud providers from profiting from some redis codes, but it is resisted by the open source community, which finally turns to redis source available license.

Paul Berg, an open source licensing consultant who has worked with Amazon and Microsoft, suggests that the copy left license should not be counted. Because it is not compatible with entities that focus on proprietary code, the result is that loose licenses are more popular.

Copyright protection is a commonplace topic, but for the integration of proprietary licenses, more relaxed licenses such as Apache, MIT, and BSD have always been more popular.

This is to be expected, as easy licensing does not impose too many restrictions or obligations on the interface use of proprietary software, and copy-left does not want to release the right to redistribute.

In addition, we see a new upsurge of interest in copy left in cloud computing and other fields,For example, agpl license is more relaxed than GPL.

It has stronger guarantees that allow consumers to continue to be members of the community, not just to expand and re package the software for their own benefit.

Today, it's very rare to find a company that doesn't use open source software.

When authors grant proprietary intellectual property rights, it means they believe that their contribution is of high value. So much so that the private-furcated cost of maintenance-sharing projects has gone beyond the difficulty of integrating all development results.

Related news
Open source Watch: copy left protocol ignored, loose license bullish
Google transfers istio trademark to open usage Commons
Hot news this week
The developer of the dating app Tinder has reached an agreement with Google over billing rules for its app store
Red Elf Lightning erupts in the Himalayas Spectacular Spectacle: Experts Reveal What Exactly Is This?
The founder of the Internet Quick Hand Su Hua was taken away for investigation, and the fast hand responded: the news was not true
Or for Studio Display Pro, the release of Apple's 27-inch Mini LED-backlit Display has been delayed by October
One picture to understand! Blue Factory has issued 3 new machines in a row: self-developed chip blessing, the narrowest lower border
Tencent established a smart technology company in Chengdu, and its business scope includes Internet data services
I once touched the ceiling of the mobile phone screen! Well-known brands announced that the new flagship is the first to carry the Snapdragon 8+
Or has it been spread insidiously in Communities in Europe and the United States: Should We Be Worried About Monkeypox? Experts demystify
Economist credit card monthly bill $11.4! Only paying for a purchase of Tencent Music, the account manager is busy "condolences"
Huawei and the Chinese Academy of Sciences jointly developed the new 3D DRAM solution is expected to break through the key root technology of storage
The most popular news this week
China's PC and tablet market status quo at a glance Demand shrinks! Huawei, glory is eye-catching
Chinese director short film Cannes won the award: the cost of 5,000 yuan took 10 days to make the work super high reputation
Two new characters! Original Gods version 2.7 pre-download has been enabled
The 780 billion "oil leader" CNOOC rose and fell in the intraday, and the stock price hit a new high since its listing
The largest acquisition case in the history of 400 billion chips Chen Fuyang and Dell only used to meet
Visual China responded to 8 yuan Audi photo questioning: 1500 yuan for sale, the original author only received 2 yuan
Musk: The U.S. recession "is actually a good thing"
Online literature lost 6.2 billion yuan due to piracy last year? 522 online writers signed a petition against piracy
Baidu opened up nearly 15% and Alibaba opened up more than 12% in Hong Kong
Game cards sell crazy and make a lot of money! NV's fiscal first quarter revenue increased 46% year-over-year