With regard to DG1, due to the limited information published, the outside world is still eager to know its specifications, game performance, etc.

It is found that on geekbench 5, OpenCL scores of a batch of 96 EU units and 4GB ram Gen 12 core products have been published. Careful observation shows that this GPU is based on XEarchitecture of the stand-alone graphics card.

In terms of frequency, 1GHz is the lowest and 1.5GHz is the highest.

Only from the comparison of OpenCL score horizontal lines, it is basically close to the level of GTX 1050. Considering that 96 EU DG1 is aimed at notebook platform, it does not seem to be disappointing.

In this way, DG1 alone although positioning is particularly high, but in the face of some old 3A or the current mainstream online games, will be completely no problem. 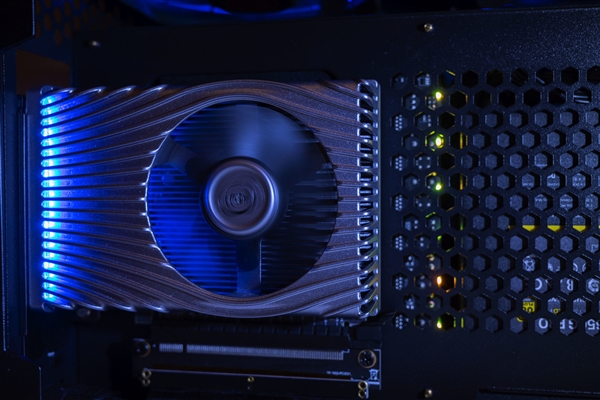 Related news
EEC documents indicate that Intel's first DG1 is expected to quickly seize the entry-level Market
CES 2020 Intel releases several heavyweight products: single display DG1, foldable screen device, automatic driving scheme
Intel DG1 Unique Performance Rundown Exposure: Close to NVIDIA GTX1050?
The Linux 5.10 kernel is ready to support Intel DG1 audio output
Intel Xe DG1 GPU has been shipped and will be on sale this year
The Intel DG1GPU will be loaded into separate desktop cards next year for the OEM market
Intel graphics driver officially supports DG1, showing that cyberpunk 2077 no longer crashes
Intel introduces DG1 graphics card based on 10nm superfin for OEM
Intel DG1 desktop independent graphics card for the first time: comparable to hd7870 nine years ago, power consumption is only 1 / 6
Hot news this week
With the NIL technology, Canon wants to provide China with a lithography machine comparable to the EUV
Genius hacker Geohot promised Musk 12 weeks to fix Twitter search, but posted for help because he wouldn't react
Google's parent company is planning to cut tens of thousands of jobs
The Long March 9 is basically confirmed: the low-orbit carrying capacity of 150 tons can carry the entire space station into space
A small plane in the US has crashed into a 30-metre high voltage power line and got stuck: 80,000 people affected
Alibaba launched a new cross-border e-commerce platform in Spain, aiming to operate independently in the middle and high-end market
Google is concerned that Microsoft's acquisition of Activision Blizzard will affect the ChromeOS experience
Can recording others' wechat chat records be used as evidence? The Beijing Internet Court has an answer
The second generation Snapdragon 8 flagship! Mi 13 toughened film appeared: four sides and other narrow screen accounted for a stable ratio
A Tesla crashed into two cars in Taizhou, Zhejiang province, killing two and injuring one, police said
The most popular news this week
Eggs don't fit in one basket: Some of the Snapdragon 8 Gen2 is manufactured by Samsung
128 core 256 threads! AMD Zen4c is here: Arm is cornered
Breaking the spell of "Android 3 year must card", the new Breguet mobile phone will be sold for the first time tomorrow: from RMB3499
Be careful with your phone for a long time! The aunt played with her mobile phone so much that her fingers got stuck
More conscientious than Google, the OnePlus promises a 4-year upgrade: Android 17 beckons
What do Chinese teenagers do online? It's comforting to be third and first in gaming
Tmall sought 500 million yuan in loans from ofo affiliates and Dai Wei
Tencent Holdings: bought back 36,200 shares at a total cost of HK $10.606 million
Tuniu's third-quarter revenue fell 32% from a year earlier to 7,790 yuan
Xiaomi 13 press conference new product summary: In addition to the phone there is a monster new