N don't update Tencent for a long time to give up Tim? Official response

Do you remember Tim by Daming Lake when you are working remotely?

With the situation of epidemic prevention and control still severe, online office has become a hot topic. As a result, Tencent, Alibaba, byte skipping, Huawei and other enterprises have come up with their own skills in the field of telecommuting. Nailing, enterprise wechat, fly book and other enterprise office applications have also become the most frequently opened apps in recent period.

But Tencent's TIM seems to have been forgotten The product, which originally focused on office scenarios, has not been substantially updated for a long time, nor has it been officially recommended by Tencent in the current outbreak; it is in the Apple App Store

So, another netizen asked: is Tencent going to give up Tim?

At present, Tim team is working normally, and the new version is under development. We will continue to optimize the basic experience, strengthen the linkage with Tencent documents, and provide users with stable, efficient and secure product experience in more efficient collaboration scenarios.

That being said, it's an indisputable fact that the TIM client version has been updated slowly among them, the latest android version 2.3.1 was updated in november 2018.

An attempt of Tim and QQ in the field of office

In November 2016, Tencent officially launched TIM, an IM client for office scenarios that has both mobile and PC versions; and in the official version it is called the 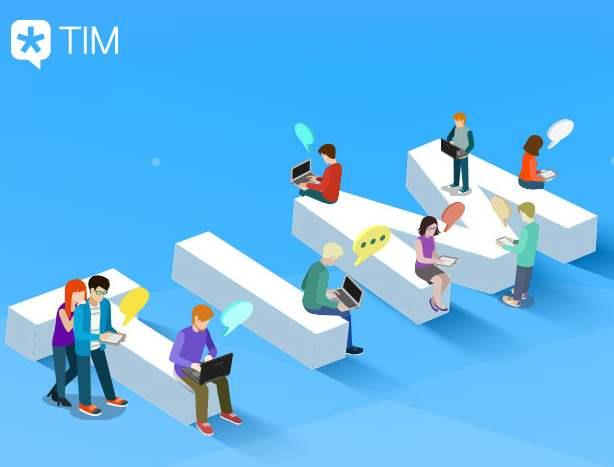 In fact, Tim itself is the product launched by Tencent QQ team. From the perspective of product experience, it has a simple interface, simple functions, and no advertising. On the basis of QQ chat version, it adds the support of collaborative office services. It can use QQ number to log in directly, friends and messages are fully synchronized, and it supports multiple people to edit word and excel documents online. It can also view web pages and export documents, and it can also support multiple people to talk, and conference preparation Fixed.

Obviously, the introduction of Tim is an attempt of QQ in the field of office.

It should be noted that before the introduction of Tim, QQ, as an excellent communication product, has been applied to office scenes by many people. In particular, compared with wechat, QQ itself has unique product advantages in large file transmission, multi-user dialogue, group functions, etc., so it also gains a number of office users.

So the question is, why does the QQ team launch Tim alone?

In the view of Lei Feng net, the launch of TIM, to a large extent, and QQ at that time in the user activity performance. QQ's monthly activity in the third quarter ended September 30,2016 was 877 million, according to Q3 results released by Tencent in November 2016

Looking back at the current situation, we will find that for QQ in the second half of 2016, although its volume was still strong at that time, it has already felt the threat of user volume from wechat.

In this case, the QQ team launched Tim on the basis of QQ, which is more like a refined extension of QQ office functions on the basis of more accurate scene definition and more perfect functions. Its goal is to obtain a larger office user group, so as to maintain its own user volume and product status.

It is worth mentioning that in 2016, when Tim was born, the enterprise wechat produced by wechat team has also been launched and started to work.

Tim has been in the limelight, but there are bugs

After the introduction of Tim, it has been continuously improved in terms of office scenes.

For example, in version 1.0, TIM was added

It can be said that in a long time after the launch, Tim has made a lot of efforts to improve the user experience and office functions.

From the external point of view, after the release of TIM, has also occupied a lot of publicity. For example, in April 2017, Tencent announced the release 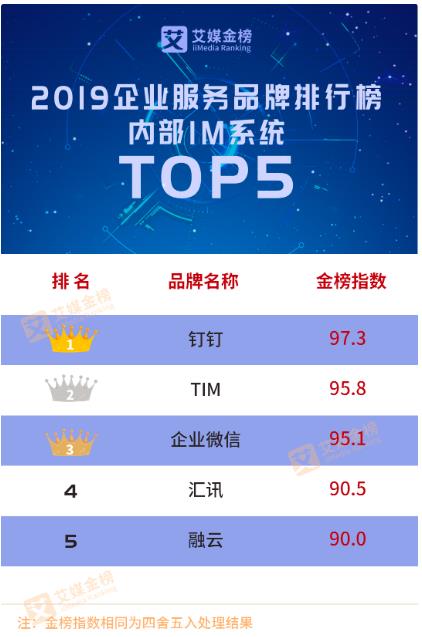 However, with 10 releases of 2.3.0 in 2018 as the turning point, Tim revealed some obvious problems.

Even iPhone users Tucao said, TIM even iPhone XR and other new mobile phones resolution is not timely adaptation.

And from the user's practical application feedback, TIM also appears bug frequently in the user experience from 2018. Some netizens complained that TIM had a severe information lag, while others reported that TIM had bugs in multiplayer video chat and information synchronization, while others found the iOS version of TIM couldn't watch the video under mobile traffic

In the first half of 2019, a longtime Tim user said on a social networking site:

After experiencing Tim a year ago, I felt great. Then I changed my PC and mobile phone from QQ to Tim. However, Tim is not updated for a long time, and there are some small problems for a long time (for example, for IOS, QQ fast login does not support Tim, and it will automatically pull up QQ). Last month, it was suddenly found that the updated mobile QQ can manually turn off some strange functions, and the degree of conciseness can roughly meet the visual requirements, so QQ was replaced from Tim.

This can be seen as a microcosm of the relationship between users and Tim.

Did Tencent give up Tim?

TIM's most recent update was the 2.5.2 version on the iOS platform, dated January 17,2020; in terms of the update, TIM simply indicated some bug fixes to further enhance stability

To this, a netizen comments: The meaning of TIM update is just to brush the version number and increase the installation package, and remind everyone

So, has Tencent given up Tim?

In response to this problem, some netizens said on the platform that the TIM team had not been disbanded, and had been responsible for doing Tencent documents for a while before, so TIM had not been updated; but at the end of last year, some user comments were collected to prepare for the update

And Lei Feng also noted that in response to the outbreak after the remote office and teaching, QQ also launched the latest version of V8.2.7 on February 7, which added QQ group calls, mobile phone can achieve computer screen sharing, full microphone, camera management and other functions. According to this, some netizens speculated that the TIM team might go to QQ to help do office functions 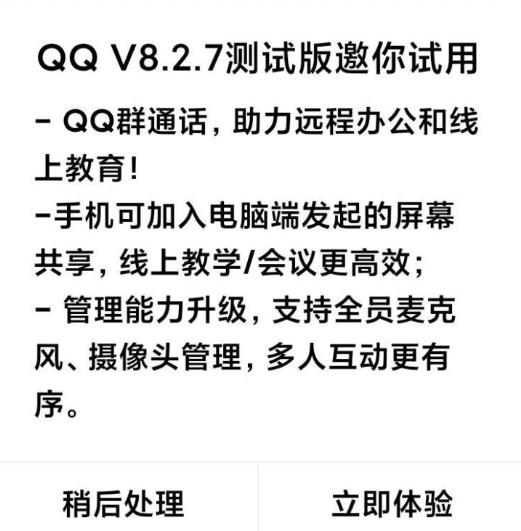 However, as officials say, tencent is not giving up tim. However, as far as TIM is concerned, Tencent's products, such as WeChat, Tencent Document, Tencent Pleasure and Tencent Conference, have been officially defined as

Finally, think back: when was the last time you used Tim? 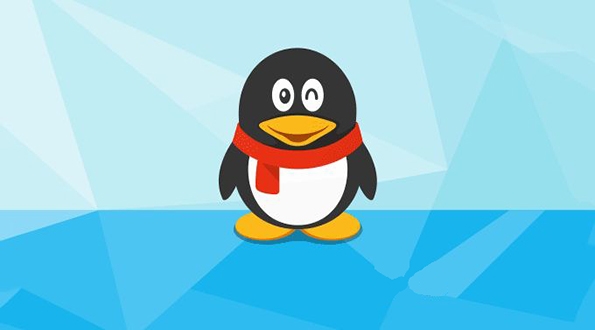 Related news
N don't update Tencent for a long time to give up Tim? Official response
Tencent to give up Tim?
Hot news this week
"Sheep a sheep" fire, is expected to attract hundreds of millions of financing? But it doesn't have a license...
The first "zero carbon factory" in the ICT industry, Lenovo (Tianjin) Smart Innovation Service Industrial Park is officially put into production
Baidu Ping Xiaoli: The repurchase rate of users on Baidu App reached 60%, and the daily inquiries exceeded 4 million
Billions of euros in investment, Intel Italy chip factory will be located in the Veneto region, sources said
"Sheep a sheep" the whole network burst fire! The founder was the Alma mater system of exhibition card publicity
Huawei Mate50 is on sale: Kunlun glass version is difficult to find, the maximum price increase of the Porsche series
Tencent Music back to Hong Kong behind: online music "internal volume" intensification, short video will become a new growth rate
Intel failed to deliver on its promise: Summer is over and there's still no high-end, flashy desktop graphics cards
Xiaomi Civi 2 Stable Snapdragon 7:23 87mm2 Large-area VC liquid cooling, heat dissipation increased by 200%
"Look at the weather why do I need to renew membership"? Inkblot Weather membership service is a hot topic
The most popular news this week
Huawei Smart Screen portable version released: 10.4-inch 2K screen, 10995mAh battery
The world's first 6GHz frequency Intel high-profile announcement: the lead is indisputable
Do you have the opportunity to take noise -canceling ear to damage the hearing? Experts from the Three Hospital said that
Jump ticket 2 years "pigeon king"! Avx-512 is publicly supported for the first time in the Intel 60 core
I can't afford to live without Musk's help
Mobile phone fast charge new volume king Xiaomi three new machine into the network: the highest 210W?
Secretary -General of the Federation of Federation: Foreign artificial artificial Chinese online red cars have great advantages in China
Do you want to travel to space? Aerospace expert: China already has technical conditions
The strong response to the iPhone 14 Pro Max could widen the gap between the iP15 Pro series
Intel's Arc A7 flagship graphics card debuts in private: Just these two