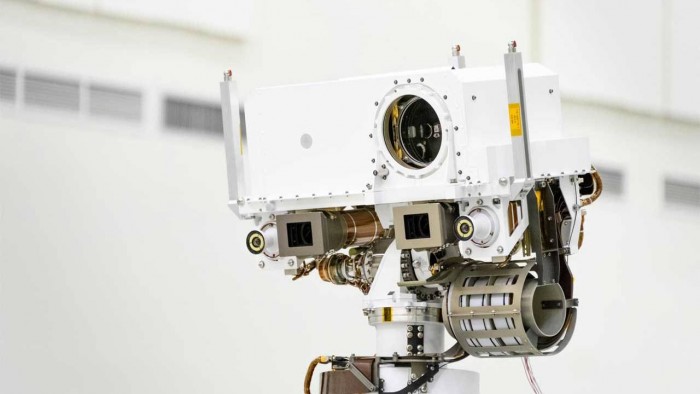 According to foreign media reports, NASA is working on a new instrument, which will be used for Mars 2020 Mars exploration vehicle. It is reported that Mars 2020 will be launched this summer, and the instrument NASA is currently focusing on is supercam. It will be able to fire lasers at rocks 20 feet away, allowing some of them to evaporate.

Scientists will study evaporated rock emissions to determine whether there are minerals in the form of liquid water. NASA is particularly interested in clays, carbonates and sulfates. Scientists will also use information from supercam to determine whether to extract cores from the rover's sample cache system. Mars 2020 will collect these core samples in metal tubes and store them in predetermined locations for use in future missions.

Supercam is an upgrade of curiosity's chemcam, which uses an infrared laser beam to heat its target to around 18000 degrees Fahrenheit. This method is called laser induced breakdown spectroscopy (LIBS). By evaporating the material, the camera can determine the chemical composition of the rocks from the resulting plasma.

It is understood that supercam will use artificial intelligence to find the target rock, and the advantage of this is that it can aim at the rock features very accurately.

In addition, supercam also has a microphone through which scientists can hear the sound of the laser hitting the target. The sound changes with the physical properties of the rock.

Related news
NASA scientists equip the Mars 2020 Mars with an impressive robotic arm
NASA begins to fuel the nuclear power plant of the Mars 2020 Mars
What is the Mars 2020 Mars Rover? Go to the NASA assembly room and have a look.
NASA installs new landing sensor components for Mars 2020 rover to improve safety
NASA Engineers Install Sample Cache System on Mars 2020
NASA says Australia will help support its Artemis and Moon to Mars programs.
NASA completes separation of Mars 2020 landing platform
NASA Mars 2020 probe completes the first "stand up"
NASA showcases a new generation of supercam cameras to be used in Mars 2020
NASA is finally going to unveil the official name of Mars 2020
Hot news this week
Templates for creating new Twitter in the future? Musk's praise of WeChat has triggered a heated discussion on the whole network
Tencent Music's TME live will re-screen Jay Chou's concert on may 20 and 21
Sony's new LinkBuds S headset parameter exposure: only 4.8 grams of comprehensive battery life 20 hours
Weak demand in the mobile market! Domestic shipments of mobile phones fell 40.5% in March to a two-year low
Henan 4 village bank line cannot withdraw cash? CBRC responds! The public security organs have registered an investigation
Baidu: In 2021, an average of 56 billion malicious information of all kinds will be intercepted every year
"Chinese version of LV" is re -executed 680 million! Reporting the property clues of the chairman, up to 8.66 million yuan
Pig companies continue to increase technology, just launched the smart pig farm, another 100 million to set up a technology company
The Jingdong Express bulk order sent to Shanghai across the country is completely static? JD.com: Not true No such information has been published
"Tencent's more than 30-year-old employees account for nearly 60% of them" on the hot search Netizens: Don't mention 35 years old, start to mention 30 years old
The most popular news this week
The domestic screens are rolled to the 2K screen. Why don't Apple follow the roll?
Meizu 19 series coming? Meizu mobile phone appearance patent disclosure: the return of secondary screen
Jingdong crowdfunding 10000mAh mobile power supply: with Apple Lightning and Type-c dual wires
Mobile phone chip CPU energy efficiency ranking: it is comparable to A14
What can we learn about m& # 111nkeypox cases in many countries around the world?
Alibaba Daniel Zhang connects 300 platform merchants: do more practical things for merchants
At the age of 58, he was elected as the chairman of Everbright Bank! Former President of Bank of China and Construction Bank
Buy An Audi or a Tesla? Audi's new electric vehicles are on sale: from 300,000
The first domestic Tianji 1300 mobile phone did not fire first! More than 260,000 people made reservations
The Chinese team officially made up for the bronze medal in the Tokyo Olympic relay! Su Bingtian responded excitedly