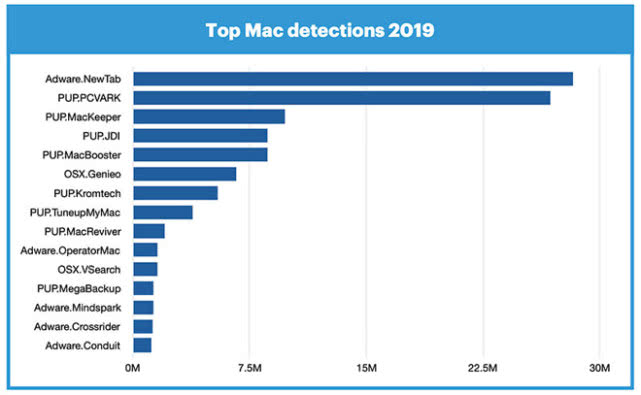 Malwarebytes said in its annual rogue software status report that the number of detected Apple computer rogue software increased by more than 400% year on year.

Apple's computer is rapidly becoming a cybercriminal, the report says

It should be noted that in the global personal computer market, the vast majority of manufacturers except apple use Microsoft's windows operating system, and windows plays a dominant role. In addition, personal computers have been recognized as a sunset market in the industry, and sales have continued to decline over the past years. According to the reports of market institutions, Apple's sales have also declined significantly, and its overall market share has declined.

Apple's share is declining. Why are rogue software attacks on Apple increasing?

According to media analysis, one possible reason is the significant growth of edge rogue software (that is, non mainstream software). Malwarebytes pointed out that Apple's standard operating system security measures are more focused on preventing important rogue software, rather than advertising software and potentially harmful programs, so that these two types of rogue software can spread rapidly on the MAC side.

In fact, the most common Apple platform rogue software

Although the number of rogue software detection for Apple's platform is increasing, according to the professional company, Apple Mac OS is still a relatively safe environment as long as users still pay attention to some weird phenomena on computers. As pointed out in the report, in 2019, in addition to a rogue software, all other rogue software mainly involves luring users to download and open rogue software.

Within apple, the importance of the pc business has been declining. In the fourth quarter of last year, Apple's

Due to the decline in sales, Apple has significantly reduced the frequency of notebook product updates, which has also caused some old users' dissatisfaction.

In the fourth quarter of last year, Apple's computer sales were only 5.26 million units, according to Gartner, a US technology market research firm. Its global share continued to decline, shrinking to 7.5%. Such share is only one-third of that of the companies in the world's first PC group (Lenovo Group, HP, Dell). In addition, the total sales volume of the second group of personal computers, composed of apple, Acer and ASUS, is only the sales volume of one company in the first group.

The personal computer is Apple's hair business, but Apple's iPhone, launched in 2007, not only brought a mobile Internet to human society, but also radically changed the company's attributes. A few years ago, apple was named

Related news
VMware intends to acquire Pivotal Software
Report: last year, Mac was attacked by rogue software for the first time, surpassing windows
Malware report 2020: windows is more secure than mac
The new Mac can also install windows! And the surface?
Hot news this week
The developer of the dating app Tinder has reached an agreement with Google over billing rules for its app store
Still did it! Canada has banned Huawei and ZTE from participating in the country's 5G network on "national security" grounds
Red Elf Lightning erupts in the Himalayas Spectacular Spectacle: Experts Reveal What Exactly Is This?
The founder of the Internet Quick Hand Su Hua was taken away for investigation, and the fast hand responded: the news was not true
Wang Xiang, president of Xiaomi, explained that a shortage of low-end chips is a major challenge in overseas markets
Or for Studio Display Pro, the release of Apple's 27-inch Mini LED-backlit Display has been delayed by October
Tencent Q1: The business service business has "slightly decreased" year -on -year, and resource centralized video cloud and network security | View financial report
One picture to understand! Blue Factory has issued 3 new machines in a row: self-developed chip blessing, the narrowest lower border
Sony released the active noise-canceling headphones WH-1000XM5, equipped with 2 chips and 8 microphones
Tencent established a smart technology company in Chengdu, and its business scope includes Internet data services
The most popular news this week
Shenzhen Atmosphere! The sales price of mobile phones, computers and other products is subsidized by 15%
Microsoft shows third -party components: Win11 chicken rib function is saved
No need to grab it! Sony announced an increase in PS5 shipments
Audi advertising poster photos only sell for 8 yuan? Photographers question the unreasonable use of the photo purchase
Twitter spent $150 million to settle privacy and security lawsuits with the U.S. government
Hong Kong Hang Seng Index Opens 0.5% Baidu Hong Kong Stocks Open More Than 2%
Amazon's new CEO participated in a shareholders' meeting for the first time: to restore normal profit, ready to cut off the excess warehouse
Baidu, Shunwei and Fosun are shareholders, and pharmaceutical Internet "unicorn" pharmacists help hand over the watch to the Hong Kong Stock Exchange
Google CEO Pichai: Recession fears intensify The cycle volatility in the tech industry is even more intense
Amazon CEO first appeared at the shareholders' meeting: to restore normal profit