How to choose HUAWEI Watch GT2 and Apple Watch 5?

At present, people's strong demand for sports and health segmentation use scenarios has spawned a large number of smart watch products. However, few products can meet the core needs of users' professional sports and health.

When it comes to smart watches in the first two years, everyone will think of Apple watch for the first time. But now, the emergence of Huawei watch GT series has made a good demonstration for smart watches, and has walked out a different road from Apple watch, becoming a benchmark for long-term, professional sports and health watch categories. 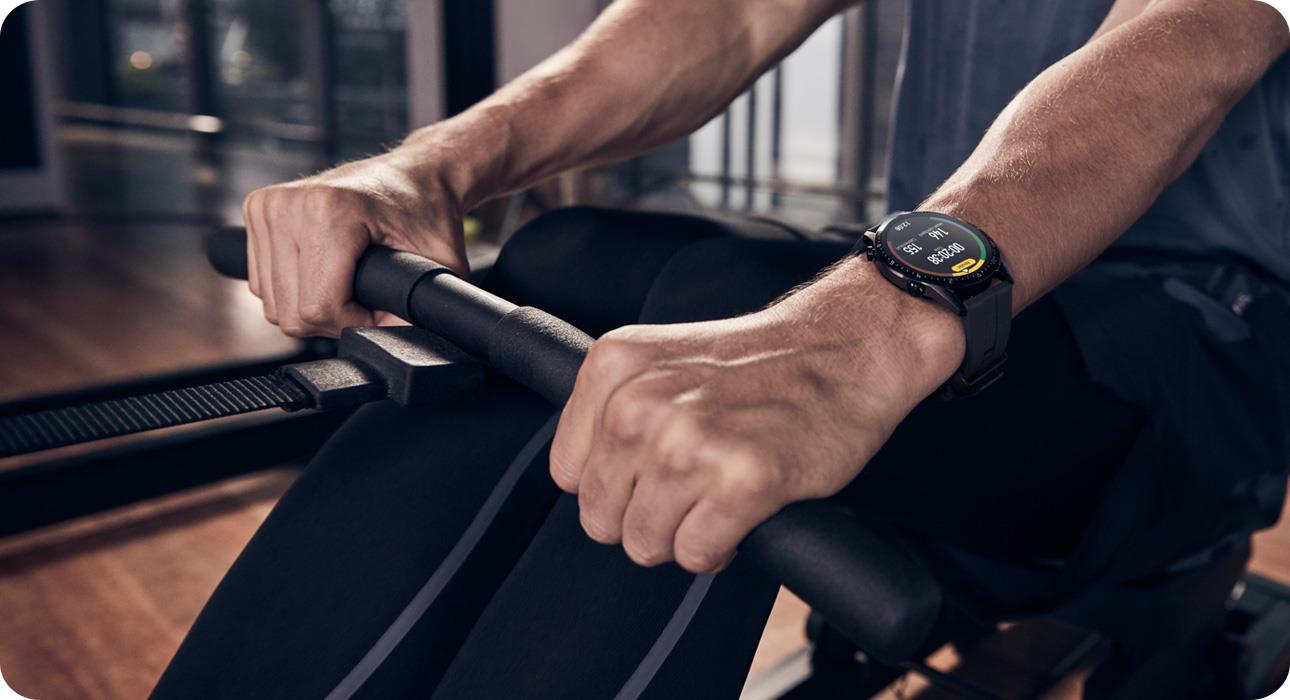 The name of Huawei watch GT comes from the automobile industry. The Italian translation of GT is Gran Turismo, which means a long journey. The English translation is grand Tourer, which means a high-performance luxury touring car。

In the 1960s, cars were generally incompetent for long-distance travel, and the mechanical reliability was very low, resulting in a number of high-performance, high-reliability large horse sports cars, known as GT. The implication of GT for high performance sports cars is preserved and gradually formed

Huawei Watch GT means it has a long life, high performance, high reliability, such as 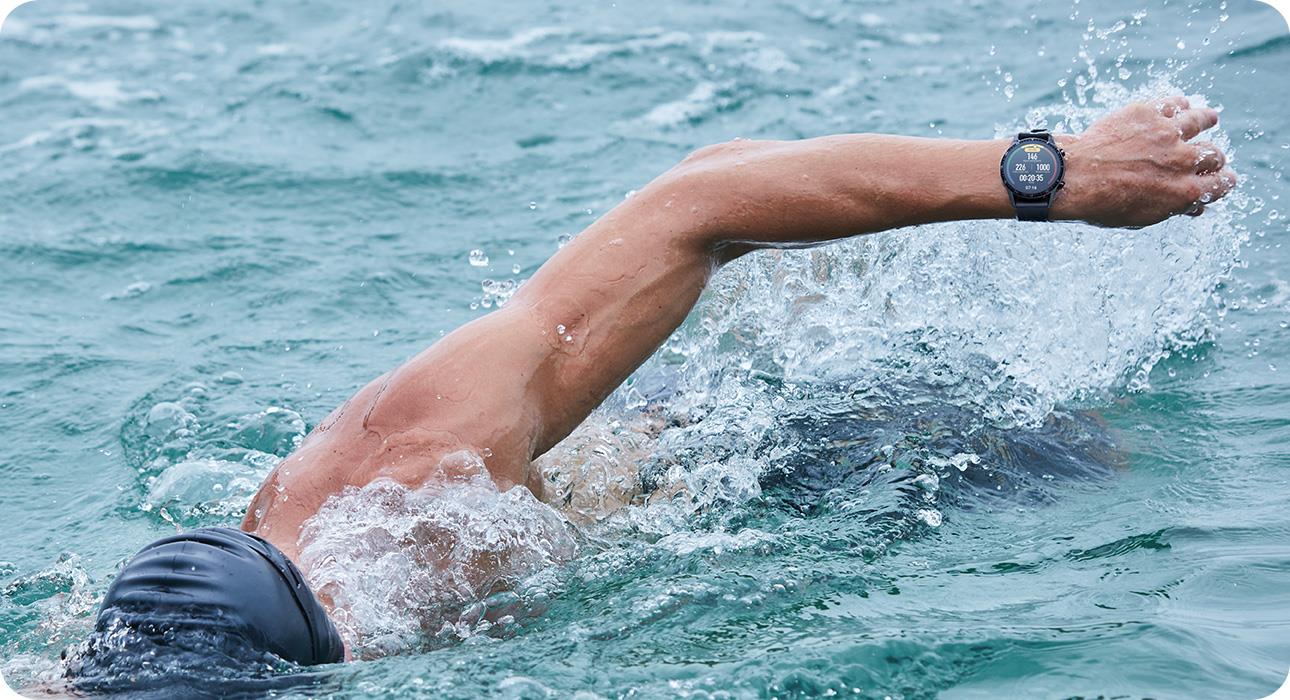 If you're going to get a smart watch, too,Is it better to buy Apple watch 5 or Huawei watch GT2?Let's take a look at the following core selling points. 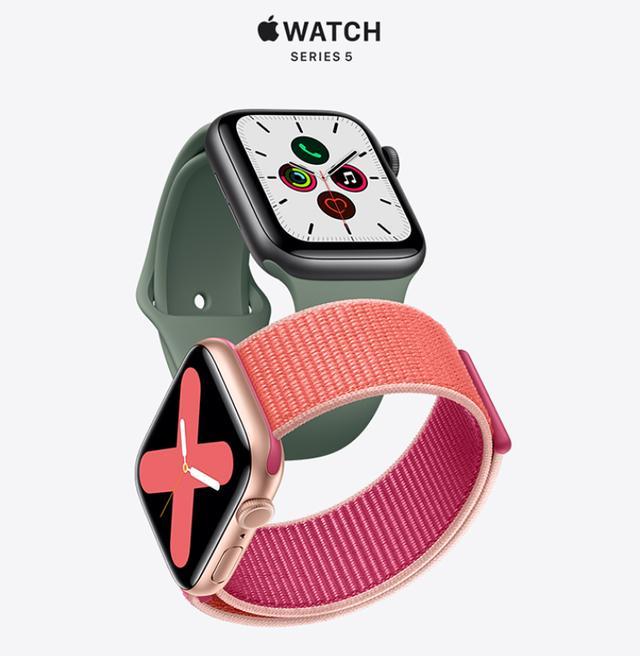 In terms of appearance design, apple watch pioneered the square watch. The five generations of products are designed as one, which is slightly flat, and the advantage is that it is easier to operate interactively.40mm and 44mmAt the same time, a variety of material case and strap are available, which are rich in customization. But obviously,Apple watch is more like a luxury line. Standard materials and appearance are relatively common. If you want to choose personalized products, the price span is large, ranging from more than 3000 to tens of thousands. 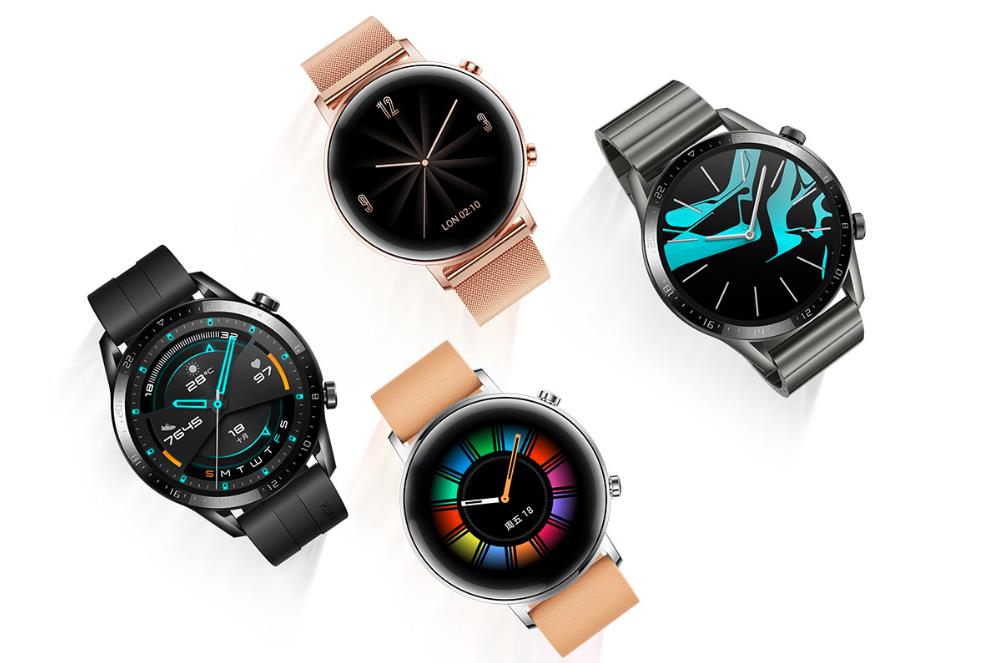 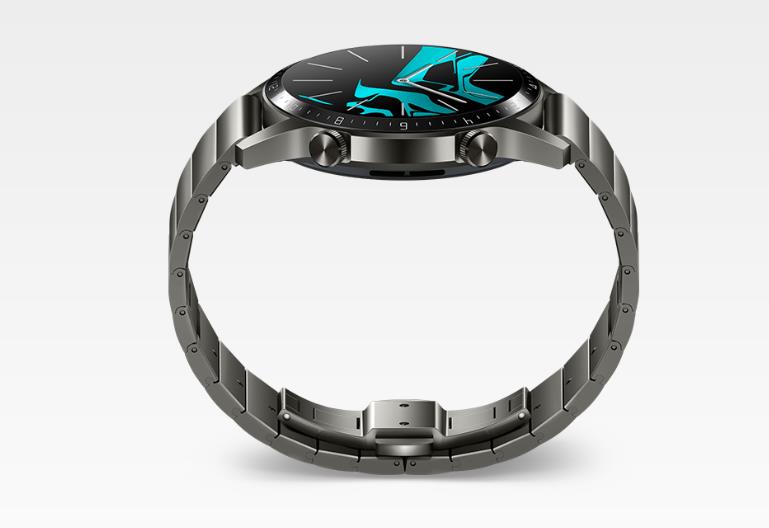 In addition, two versions of 46mm and 42mm are available on the dial size.Among them, the 46mm large dial strap is longer, while the 42mm one is suitable for girls and boys with smaller wrists. The 46mm and 42mm sizes respectively design fashion and sports styles, which can meet the individual needs of different users, and the prices of different styles are not different.

Battery life has been a common pain point for smart watches, including apple watch 5. Although the duration of the official bid is 18 hours,But from the user feedback, generally less than 18 hours, can only use a day, especially after opening the continuous screen display, basically a day-to-day level. 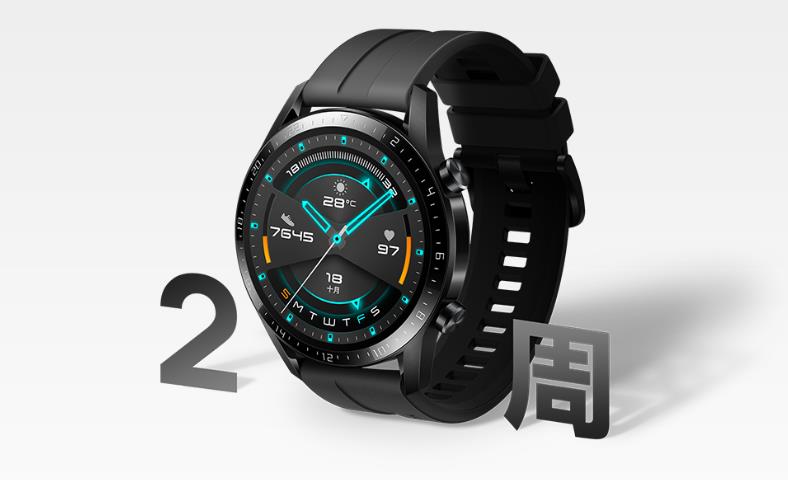 Huawei's watch GT2 continues the long-range characteristics of the first generation of watch GT. According to the official data of Huawei,In typical use, the 46mm series of Huawei watch GT2 smart watch can last for two weeks, while the 42mm series can last for one week.

In addition to batteries, the biggest contribution is due to Huawei's first low-power wearable chip A1. The chip has not only passed the world's first Bluetooth dual-mode 5.1 certification, with the advantages of fast connection, stable connection, and low power consumption, but also achieved ultra-low power operation and strong endurance new experience under the multi-sensor work of sports, music, intelligent heart rate, sleep monitoring, etc.

According to the actual experience, when the GPS, heart rate and pressure monitoring of Huawei watch GT2 46mm are fully turned on, coupled with mobile QQ and wechat message push, the power loss in one day is about 7-8%, basically in line with the two-week endurance expectation of the official publicity. Even if it is used heavily, it is not a big problem to stick to it for one week.

In terms of sports and health,Apple watch 5 supports follow-up testing of mainstream sports such as cycling, yoga and swimming. It can display important indicators such as heart rate, speed and calorie consumption. It also provides three ring indicators of activity, exercise and standing to help users understand the state of exercise and health. In terms of health, it supports continuous heart rate monitoring, noise warning, fall monitoring, emergency call, etc., and supports multiple health apps. 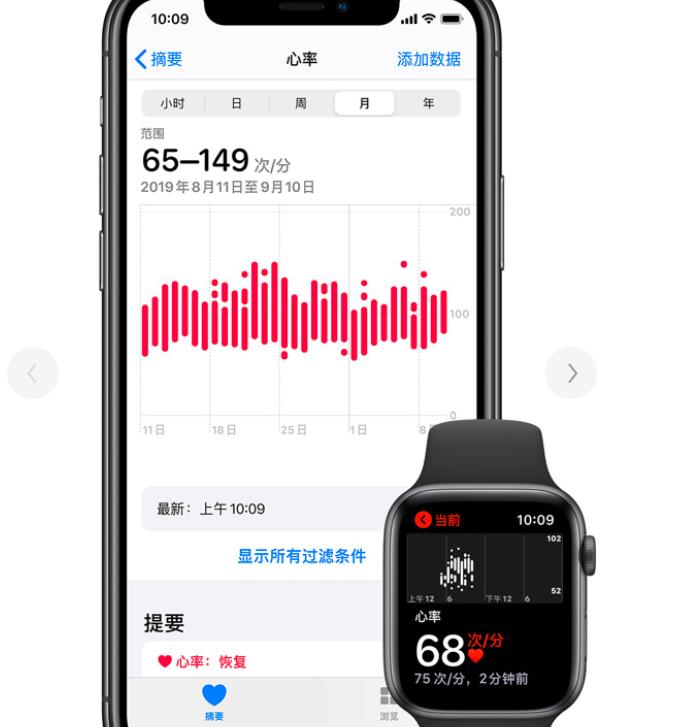 The advantage of Apple watch 5 is that it has a good ecological experience with iPhoneFor example, you can set goals according to specific physical training programs, view the summary of details after the exercise is completed, and track your training trend in a period of time with the fitness record app on iPhone.But the disadvantage also comes from the ecology. After leaving iPhone, the experience of Apple watch 5 will be greatly reduced. 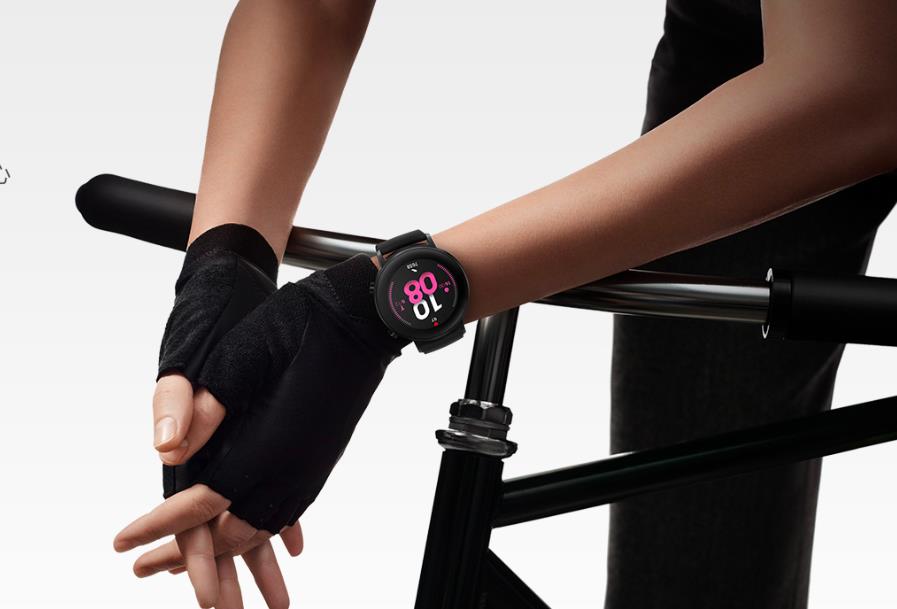 More intimate in detail and function. For example, when running outdoors, Huawei watch GT2 can provide data records of pace, stride frequency and other aspects, and after that, it will give professional adjustment suggestions and recovery time suggestions; when indoor sports, whether rowing machine, elliptical machine, swimming pool or treadmill running, there are also matching sports modes, and users can switch freely according to their own sports.

In addition, Huawei watch GT2 also adds the function of heart rate monitoring in swimming. Users can check their heart rate value when swimming, adjust the swimming intensity and rhythm, and ensure the exercise effect and avoid accidents.

On september 2 last year,301 hospitals released a heart health study based on Huawei wearables at the european school of cardiology and the world congress of cardiology. As of october, more than 510,000 people had taken part in the study, a total of 940 high-risk users had been screened, and 480 had visited and diagnosed arrhythmias, proving the Huawei watch gt's efforts and contributions to health. Huawei Watch GT2 has been upgraded on this basis with a new premature beat screening feature that has helped a lot in monitoring heart problems.

In addition, the PPG sensor built in Huawei watch GT2, combined with Huawei AI algorithm, can monitor the heartbeat 24 hours a day. Once the abnormal premature heartbeat is caught, the user will be reminded in time. Behind this is Huawei hi research's cloud statistical analysis of premature beat data, as well as the support of 301 Hospital's MafA system. 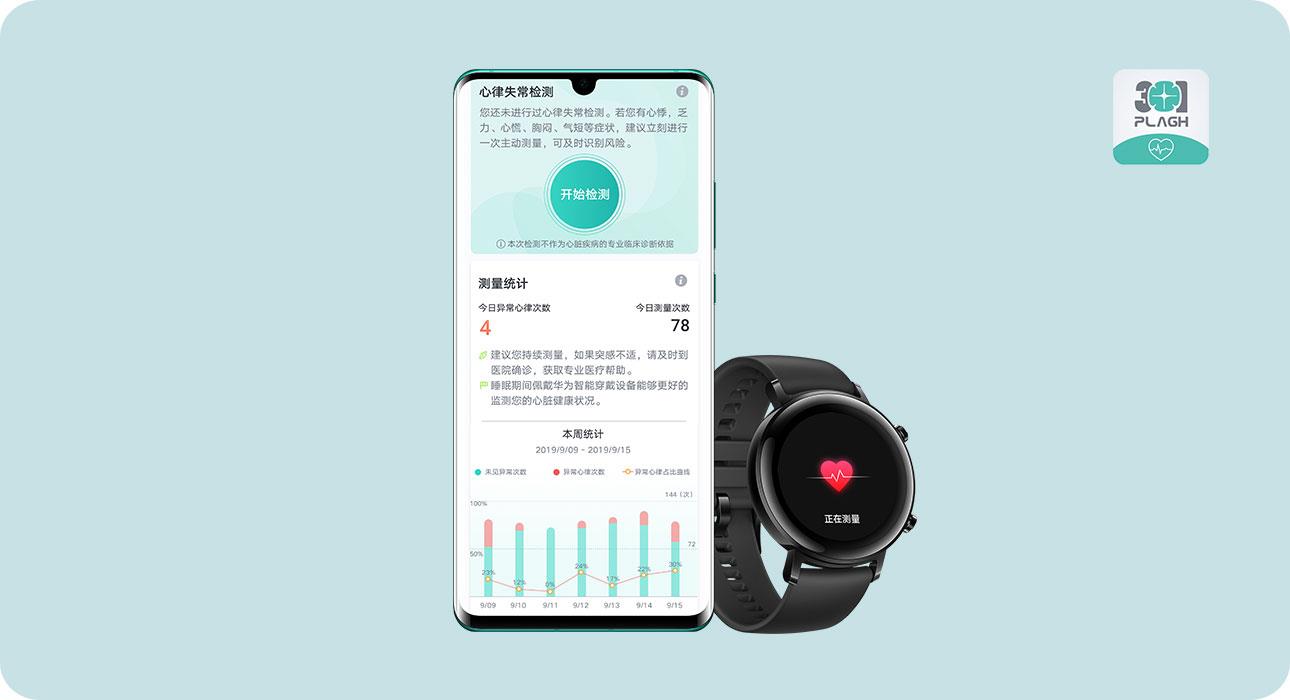 In general,100 percent of patients with heart disease develop premature beats. Cardiac premature beats not only appear in the elderly population, now working white-collar people work more pressure, stay up late, will also have a great impact on heart health. Huawei joins the 301 Hospital Heart Health Research Program, The Huawei watch GT2 can accurately capture the abnormal premature beat and heartbeat, remind users to have a rest or see a doctor in time, which is very helpful for the white-collar people who work overtime and stay up late。 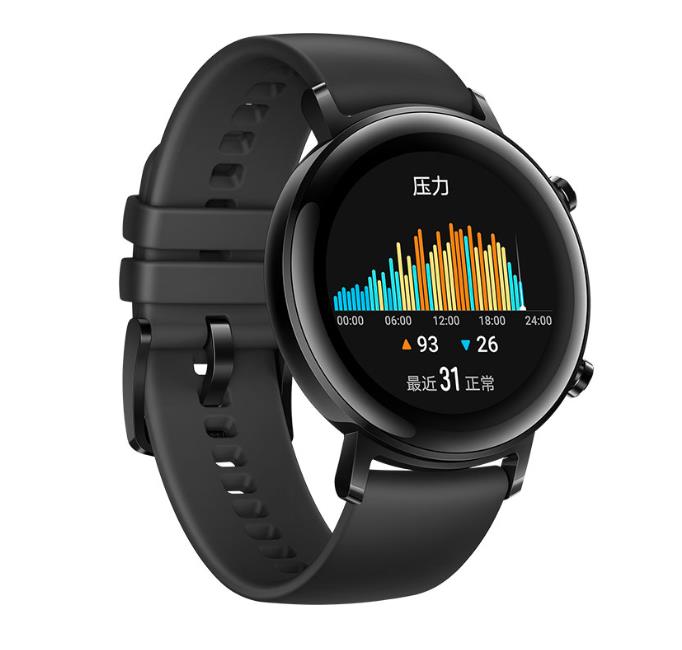 Taking the author's work as an example, it is easy to ignore the negative effects of heart health due to frequent sedentary and lack of exercise. With the Huawei Watch GT2 series, you cannot only set up a sedentary reminder during the day, 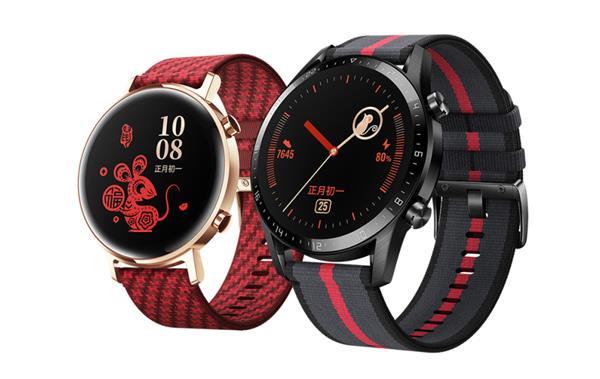 However, Huawei's watch GT2 has taken another solid road on the road of user-oriented, and has already surpassed Apple watch in many one-way functional experiences, especially at the core selling points such as long-lasting, rich sports management, and intelligent health management, and has actually moved users who have a strong need for trouble recharge, exercise and health. 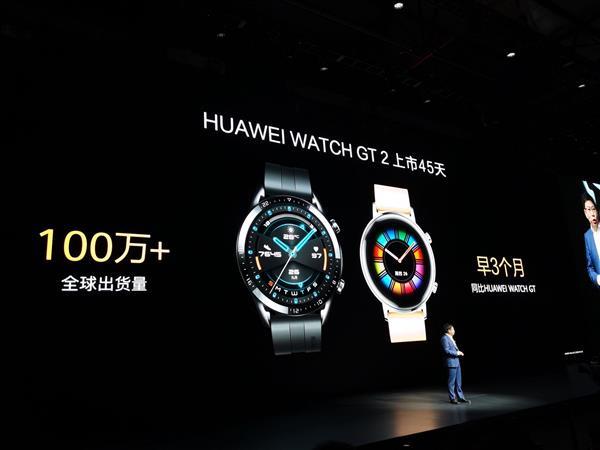 Consumer gold and silver will not lie. In November, the Huawei Watch GT2 series went on sale for a million good results in 45 days, three months ahead of last year's millions in the Watch GT2 series. No doubt it has become one of the best-selling smartwatches on the market today beyond Apple Watch 5.

At the same time, in terms of compatibility, Huawei watch GT2 is obviously more user-friendly for Android users. Apple watch 5 can't be used without iPhone, not Huawei's Android phone. As long as you download Huawei's health app and complete the registration, the experience is almost the same as Huawei's.

Related news
Aerobic sports in winter follow Huawei watch GT2 scientific mountaineering
Huawei watch GT2 New Year's edition opens an appointment: this color is loved
Professional running mode and 13 running method courses follow Huawei watch GT2 scientific sports
How to choose HUAWEI Watch GT2 and Apple Watch 5?
The perfect moment blooms between the wrists! Huawei watch GT2 frost white picture experience
Huawei school opens classes nationwide on May 3 to cooperate with Huawei watch GT2 to guide running scientifically
The 4:00 a.m. concert of Huawei watch GT2 shows us the love of mom
Huawei watch GT2 Pro exposed: it supports wireless charging for the first time and lasts for 14 days
Hongmeng distributed technology first show! HuaweiWatch GT2Pro ECG evaluation: wrist electrocardiogram partne
Get through IOS! Huawei watch GT2 realizes the function of changing dial in IOS system for the first time
Hot news this week
With the NIL technology, Canon wants to provide China with a lithography machine comparable to the EUV
Genius hacker Geohot promised Musk 12 weeks to fix Twitter search, but posted for help because he wouldn't react
Google's parent company is planning to cut tens of thousands of jobs
The Long March 9 is basically confirmed: the low-orbit carrying capacity of 150 tons can carry the entire space station into space
A small plane in the US has crashed into a 30-metre high voltage power line and got stuck: 80,000 people affected
Can recording others' wechat chat records be used as evidence? The Beijing Internet Court has an answer
Alibaba launched a new cross-border e-commerce platform in Spain, aiming to operate independently in the middle and high-end market
Google is concerned that Microsoft's acquisition of Activision Blizzard will affect the ChromeOS experience
The second generation Snapdragon 8 flagship! Mi 13 toughened film appeared: four sides and other narrow screen accounted for a stable ratio
A Tesla crashed into two cars in Taizhou, Zhejiang province, killing two and injuring one, police said
The most popular news this week
The most controversial generation of Windows: Vista turns 16!
Apple lost $56.1 billion on Black Friday! Production of the iPhone 14 is expected to drop by nearly 10 million units
Chinese storage stands up: SSD forced overtaking! World giants like Samsung lag behind
QQ membership via SMS has become a thing of the past: Tencent officials said the relevant business functions have been offline
Two men ransacked an Apple store and made off with more than 200,000 products: a textbook move by the employees
South Korea 2-1 Portugal repeat Asian miracle: Lei Jun with Xiaomi 13 thumbs up
The standard version is unbeatable and sells for 3,999 yuan for Mi fans
Two new Huawei devices are ready to launch: one is more creative
For the first time ever! NVIDIA graphics card to play the game flash screen must refresh the BIOS
Samsung Galaxy Z Flip5 exposure: Larger screen, fewer creases