After the Shanghai plant came into operation, Tesla's power battery supply chain finally began to truly open its arms to other companies. At an investor conference in January, Tesla CEO Elon Musk first publicly confirmed the addition of two suppliers, Ningde Times and LG Chemical. So far, all three of the world's top three power battery companies have entered the tesla supply chain, and what awaits them will be more intense negotiations than ever. 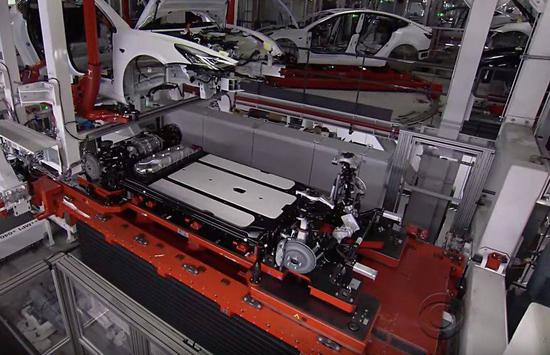 LG Chemical and Ningde era are the long-term "gossip" objects of Tesla. As early as the model 3 was put into production in 2017, executives from Tesla and LG Chemical met in South Korea, and when the Shanghai plant landing agreement was signed in 2018, musk was also said to have a low-key meeting with Zeng Yuqun, chairman of Ningde times.

Both LG Chemical and Ningde era have been engaged in a long-term tug of war with Tesla. Media reports say that LG Chemical "has been sending test samples to Tesla for the past three years" and "never leave Tesla alone". Ningde era, as the power battery leader with the largest domestic and even world shipments, has also repeatedly thrown olive branches to Tesla.

But Tesla didn't have a strong desire to find a second supplier before. On the one hand, Panasonic has a clear leading edge in the cylindrical battery field, and on the other hand, the battery factory jointly built by both sides still has room to release. In this case, it's obviously illogical for Tesla not to focus on improving the capacity utilization rate of its own factory but to switch to products from other suppliers.

However, with the completion of Tesla's Shanghai plant, the need to cultivate the local industrial chain and reduce costs has directly driven Tesla to start looking for other suppliers. LG Chemical, which has been preparing for a long time, has finally come to Tesla's attention. Good news also came from Ningde era, which will officially supply Tesla.

Tesla did not disclose details of its cooperation with LG Chemical and Ningde times, but musk said at an investor meeting that both would be "small-scale.". The analysis shows that this not only maintains the relationship with Panasonic, the "old partner", but also gives Tesla space to adjust its distribution.

In the short term, Panasonic will obviously still be Tesla's main supplier. In the era of LG Chemical and Ningde, which are developing adaptation products and solutions for Tesla, naturally also hope to maximize their research value. In the future, more frequent competition will be launched between them.

For Tesla, further cost reduction is the ultimate goal. This is also the difference between Tesla and other car companies. On the one hand, it is the strong pursuit of suppliers, and on the other hand, it is its own extreme frugality. Tesla will explore a more surprising cost system under the multi supplier pattern.

On February 3, Ningde times issued a notice on the stock exchange to reach cooperation with Tesla. Although it did not disclose the specific target and the amount of the agreement, it was enough to excite the market.

About a year ago, Ningde era issued a similar announcement against the rumors of the outside world, but it did not reach an agreement with Tesla, but acquiesced in the contact with Tesla.

As the top enterprises in their respective industries, the cooperation between Tesla and Ningde times seems to be in place. Since Tesla decided to build a factory in China, both inside and outside the industry have been paying attention to the progress of cooperation between the two sides. Unfortunately, they have not reached a substantive agreement.

Ningde era is the "first brother" of domestic power battery enterprises. In 2019, the battery shipments ranked first in the world. In recent years, with the rapid development of electric vehicles, the industry's demand for power batteries has increased dramatically, and Ningde era has become hot.

Ningde era did not disclose the specific cooperation level, but according to mask, it is "small-scale". In the announcement, Ningde times is not so "sure". It emphasizes that Tesla has no responsibility and obligation to purchase the company's products, and does not guarantee the purchase quantity of products. Tesla will put forward the purchase demand according to the subsequent specific orders.

Some auto industry media commented that "Ningde's era is full of humble potential, which is totally different from its arrogance in front of other OEM OEMs in China.". For Tesla's "pursuit" and the "uneasiness" after the pursuit, Ningde era seems not to be "the same person".

Tesla's attitude toward battery suppliers is open, but in the past many years, it has been difficult for other manufacturers to enter except Panasonic. Taking LG Chemical as an example, Tesla negotiated with it for nearly two years, and it was only after the factory was built in Shanghai that it was adopted on a "small scale".

In fact, LG Chemical supplied upgraded batteries for roadster, a Tesla sports car, in small quantities in the early years. It has always been eager to be a long-term supplier of Tesla, but its technology on cylindrical batteries is slightly inferior to Panasonic's, so it failed to do so.

In addition, Tesla and Panasonic are still in a deep binding relationship. They have established a battery factory in Nevada to supply batteries for Tesla's vehicles.

However, LG Chemical has never forgotten Tesla. LG Chemical's technical advantage lies in the soft pack battery, but they have not given up the research of cylindrical battery for many years. In the past two years, they not only made further breakthroughs in relevant technologies and production capacity, but also found new car enterprise buyers such as FF and rivian.

After Tesla came to Shanghai to build a factory, LG Chemical finally got the chance. They have a base in Nanjing, and Panasonic has no capacity for cylindrical batteries in China. In large-scale production, LG Chemical's cost control on related products has also been improved.

Panasonic is also more or less aware of the crisis. In the past year, Panasonic and Tesla have repeatedly expressed their dissatisfaction with each other when Tesla seeks new suppliers in China. Last September, when asked if he regretted investing in Tesla's super factory a few years ago, Matsushita CEO Jin He Yihong said, "yes, of course.".

For many years, Tesla and Panasonic battery have been "living together and growing together", and they have also been competing secretly. Musk make complaints about the capacity of the battery factory on the social network for many times, and Tsuka Chihiro has also publicly announced Tsu's Tesla production and management mode more than once.

The essence of the differences between the two sides is that there is no consensus on the distribution of interests. Mask extended his cost control to upstream suppliers. As the supplier with the deepest tie up with Tesla, Panasonic felt that it was not cost-effective, so Zihe Yihong would regret investing in the factory.

Among the top power battery manufacturers in the world, Panasonic is the most single customer group, and it is also one of the battery companies that rely on Tesla to rank among the highest shipments. But this kind of single relationship didn't make Panasonic reap much. After so many years of cooperation, it was not until this year that Panasonic said that the business began to make profits.

Behind this is Tesla's repression of prices. Zihe Yihong once said that musk asked for lower purchase prices many times, and he was once even forced to say, "if we do this again, we will remove all Panasonic employees and equipment in the factory.".

Panasonic did not eventually remove its employees and factories, at least not on a large scale, but Tesla is about to break away from this single supply relationship. At the opportunity of building a factory in China, Tesla introduced two new suppliers, LG Chemical and Ningde times, trying to further reduce costs through local supply and technical improvement.

"Tesla has gradually become a strong buyer, which can obviously squeeze existing suppliers with new purchasing objects," an auto industry analyst told 21st century economic news. And objectively speaking, it is large enough to have the right to negotiate at the table. "

21st century economic report learned from people familiar with the situation that although most of the battery packs of domestic model 3 are imported from the United States, a small number of products supplied by LG Chemical are already in use. With the completion and operation of the battery production line of Shanghai factory, the domestic model 3 will realize the overall local supply of power battery.

It should be noted that LG Chemical can be included in Tesla's supply chain largely because of the development and production of its cylindrical battery. Mask had made it clear in the investor meeting that he would still adhere to the cylindrical battery in the selection of battery packs. The reason is that the replacement of battery properties will cause great changes in the vehicle structure.

From this point of view, the cooperation between Tesla and Ningde era may not come to an end until the second stage.

It is said that Tesla will purchase "cobalt free" lithium iron phosphate battery from Ningde times. Although the two sides have not confirmed the news, the industry analysis believes that this is logical. On the one hand, with the decline of domestic new energy vehicle subsidies, the industry's pursuit of endurance mileage is becoming more and more rational. On the other hand, lithium iron phosphate battery technology has made many breakthroughs in recent years, and is becoming successful This, safety, life and other aspects have more advantages.