Has Netease become better after going to battle in light load? 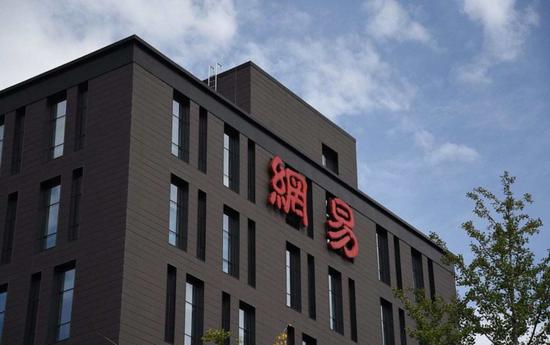 On February 27, Beijing time, NetEase released its fourth quarter and full-year earnings report for 2019. After major business adjustments over the past year,

After the light load, has NetEase become better?

We can find the answer from this financial report.

Focus, is it right?

Take a look at the hard data first.

NetEase's net income for the fourth quarter was $15.74 billion, and its net operating profit attributable to NetEase shareholders was $3.66 billion based on non-U.S. General Accounting Standards, according to the results. 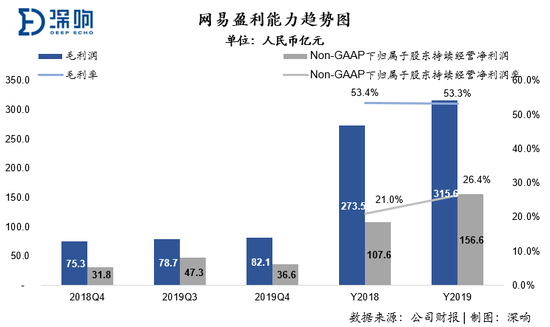 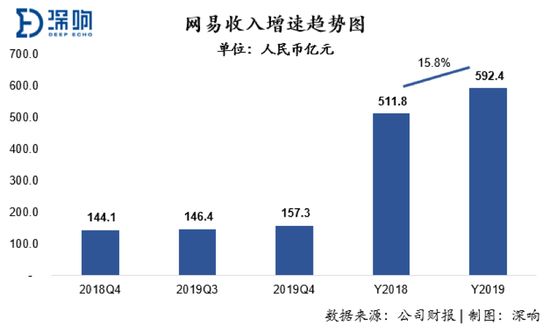 In the case of rising revenue, the absolute amount of its sales expenses has declined significantly, while the R & D expenses have increased significantly, which means that the growth of the company's revenue is more from the relevant factors of the product itself, rather than through the investment of massive market fees to drive the growth, and the composition of the company's expenses presents a more healthy trend. 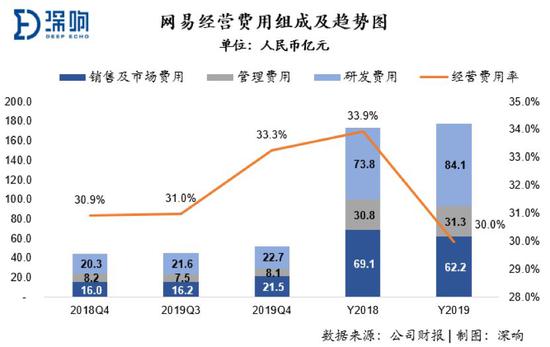 During the period 2017-2018, NetEase once suffered from the game industry dome, the external doubts about its e-commerce business. Netease's share price showed a more-than-expected rise against the backdrop of a confusing overall environment

The market is generally bullish

First the e-commerce business changed, from the platform brand, to focus on brand e-commerce. Selling koalas for $2 billion boosts the company's overall profitability by spinning off its loss-making business.

The second is to inject new blood into NetEase cloud music, NetEase youdao. In september last year, netease cloud music completed a new round of $700 million in financing; a month later, netease landed on nyse, becoming the company's first independent listing. With financing and split listing, the two major business into the follow-up development momentum.

After this series of business refreshes, the income structure of Netease has changed accordingly. Since the last quarter, the e-commerce and advertising businesses of Zhongyuan Xianyuan in the financial report are no longer listed separately, but are changed into online game, Youdao, innovation and other businesses. Advertising, yanxuan and Netease cloud music are all listed in innovation and other businesses.

What is the new kinetic energy beyond the game? 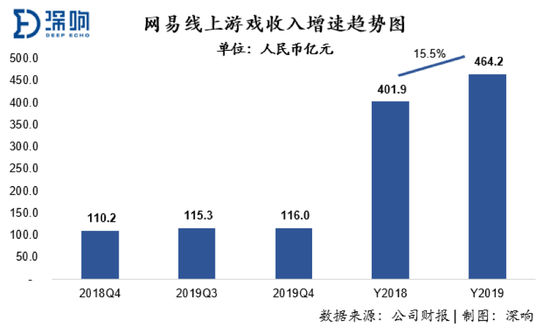 There is no doubt about the profitability of Netease's game business, but the opportunity for Netease's market value to rise is obviously in the imagination space. So the question that needs to be answered is: what is the potential beyond the game?

After successfully landing in NYSE, Netease Youdao's overall business has entered the stage of large-scale growth. According to the financial report, Netease Youdao's revenue in the fourth quarter of 2019 was 410 million yuan. Among them, learning products and services have become the main revenue source of Netease Youdao, with revenue of 310 million yuan, a year-on-year increase of 129%, and gross profit rate increased to 29.3%. 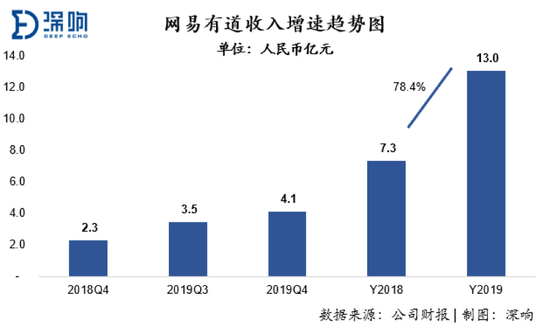 In fact, Netease Youdao has many products, such as Youdao dictionary, Youdao cloud notes, Youdao boutique courses, etc., with more than 800 million users of the whole platform.

It has to be said that Netease has chosen an opportunity track.

The scale of China's intelligent education market reached 103.4 billion yuan in 2018, and the CAGR (compound growth rate) reached 56.4% in the last five years, and it is expected to further expand to 719.8 billion yuan in 2023, and 47.4% in the next five years. In particular, the online education market maintains rapid growth, with great potential. During the epidemic, the national primary and secondary schools postponed the spring opening time, online education penetration has greatly improved, for the layout of online education, this is undoubtedly a major good.

In addition, it is worth noting the extra significance brought by the action of splitting Youdao.

In his "revalue netease ", written in 2018, hsin dismantled the market's pricing logic: the market-wide investor's overall valuation of netease is increasingly dependent on reference to its history and profitability at this stage, but does not give enough value for the company's current diversity and future profitability.

The potential of NetEase's innovative business is not reflected in the market value, and the investment in new business also dilutes the profit performance, which affects investors'value judgment on NetEase. Therefore, NetEase can get more reasonable pricing after the split listing, maximize the display potential and prospects, further broaden the financing channels, and the value of NetEase can also be more accurately evaluated.

When it comes to innovative business, another new momentum for NetEase is also emerging. Driven by NetEase's focus strategy, the innovation sector has burst into powerful growth momentum. Net income from innovation and other businesses rose 18 per cent year-on-year to 3.72 billion yuan in the fourth quarter, and gross margins rose to 20.6 per cent, according to the results. 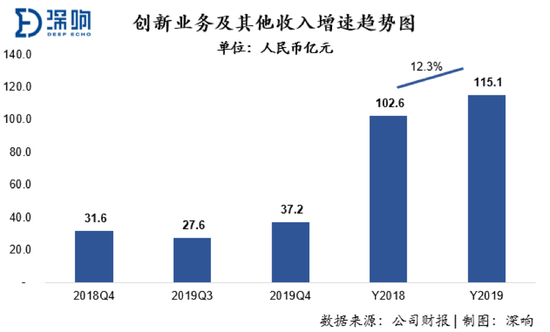 Netease cloud music is another engine that should not be underestimated.

In October 2018, the live broadcast of look officially launched developed rapidly in more than one year, and the total number of platform anchors has exceeded 110000. The audio live broadcast function was launched in April 2019, and the current revenue capacity has reached the first-line level of the industry.

In fact, in August last year, the number of users of Netease cloud music exceeded 800 million; in September, it obtained 700 million US dollars of financing from Alibaba, Yunfeng fund, etc., which also gave Netease cloud music more opportunities to try on the road of commercial realization.

In terms of member payment, the online music industry has now taken on the pattern of Tencent music and Netease cloud music. Under this pattern, both companies actually have strong ability to pay, subscribe and negotiate prices. Whether it's raising the price or raising the payment rate, Netease cloud music has a lot of room for growth in this respect.

In terms of revenue from advertising and live broadcasting, Netease cloud music also has a certain growth space in the medium and long term. After all, its traffic viscosity is there, and its advertising value will not be low. With reference to Tencent music's revenue, live broadcasting is actually the largest revenue of Tencent music. No matter from the perspective of traffic introduction or consumption liquidity, the income generating potential of Netease cloud music live show is imaginative. 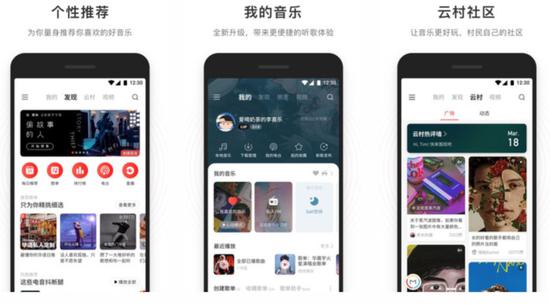 The New Fundamentals of NetEase

In the past two years, the overall business environment has changed dramatically, and major Internet companies are combing the track, seeking the next high-speed shift, and looking for new fundamentals with incremental space.

Tencent embraced the industrial Internet, Baidu held up the AI banner, and NetEase's new fundamentals for shifting gears were content consumption upgrades. Combined with the game, youdao, innovative business analyzed above, the new fundamentals of NetEase have become clear: a new NetEase based on the user experience and community operation that NetEase is good at, focusing on games, education, music, and strict selection.

On the one hand, Netease tends to rely on products to drive the spontaneous growth of users, rather than relying on loss subsidies for growth. For example, as mentioned above, Youdao has built its own high viscosity and high-quality tool flow pool to accurately acquire online education users at a low cost, and the sales expense is lower than that of its peers.

On the other hand,

Under such a strategic line, Netease has long-term doctrine. The business logic of Netease is still to focus on user experience and the operation of user community, to provide users with simple, efficient (unit use time to obtain high user value), communication (e-mail), entertainment, information and education products that emphasize interaction and social belonging.

In the future, driven by more scenario technology innovation, more and more spiritual and content consumption needs will be fully explored and satisfied, gradually becoming routine and new rigid needs. In this trend, Netease focuses on the business logic of content consumption upgrading, which has a broad application.

Related news
Has Netease become better after going to battle in light load?
Going through painful breakup? I suggest you read my test
The past of Yuncun: the "pre Ding Lei era" of Netease cloud music
Jingdong offline store banner battle arouses attention netizen: banner pulled out CP feeling!
Hot news this week
Monkey acne cases have ranked first in the world that the United States has announced the emergency state of public health
Credit card points rule intensive adjustment online transaction points more "valuable"
High reserves and low cost experts: calcium ion batteries replace lithium batteries to stand up to the daily
Alibaba executives interpret financial results: the focus of the consumer side is no longer to attract new, but to do a good job in stratified operation
Losses in a single quarter of $ 23.4 billion a record, SoftBank did not carry the plunge of technology stocks and the devaluation of the yen
The prevention and control of the American Monkey epidemic has failed. What should I pay attention to?
Sources say Samsung's Galaxy Z Fold4 is going up in price: a 512GB top unit will cost more than 13,000
Is the micro -business headache? WeChat friends are suspected to have a big move: 7 can only be posted a week
Kuaishou launched a self-developed cloud intelligent video processing chip: The chip has been streamed successfully
The new product of Xiaomi MIX is coming: both internal and external dual -screen has been upgraded to make up for the previous generation.
The most popular news this week
Probiotics also have the problem of "card neck". Experts: In -depth integration of capital, industry, research
How to verify the performance of the "Guiguang" in the large factory and the transition to b?
US media: The US FTC will begin to formulate federal regulations to expand online privacy protection
Girls are the worst offenders: Put down your phone
Byte medical layout to take another step forward Internet enterprises to break offline needs long-term investment
Sony confirmed "Mysterious Sea: Thieves Legendary Collection" for sale during the year
Lenovo announced the rescue of the head show VR700: true 4K, support iQiyi network resources
20TB free! Ali Cloud disk full compensation 15 days super members
Than apple conscience! Moto's new flagship comes standard with 125W charger: half charge in 7 minutes
Wechat update 8.0.27 beta version: small program opening faster