The novel coronavirus pneumonia situation did not stop the arrival of spring. When the whole society resumed its production and resumed production, the second Alibaba global mathematics competition started as scheduled. Alibaba announced that the competition will be open to mathematics lovers all over the world from March 5 and officially open on March 14.

Alibaba global mathematics competition is sponsored by Ma Yun and jointly held by China Association of science and technology, Alibaba foundation and Alibaba Damo Academy. There is no entry threshold for the competition. People who love mathematics all over the world can participate, whether they are from mathematics major or engaged in mathematics research. 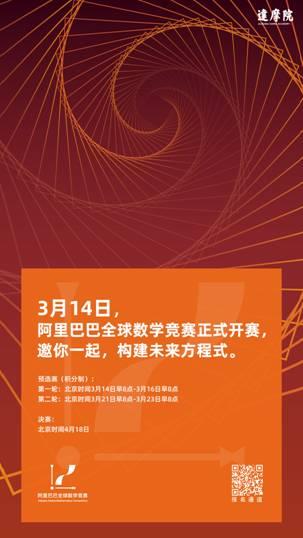 At the end of the first global mathematics competition in March 2019, the organizers agreed to meet with you again. This year's competition is full of stars. Alibaba Damo college invited top mathematics teachers from Peking University, Cambridge University, Zhejiang University and other universities to set up a question group. Tian Gang, academician of the Chinese Academy of Sciences, academician of the American Academy of Arts and Sciences and director of Beijing International Mathematics Research Center, served as the chairman of the contest proposition Committee and the member of the contest Steering Committee.

Meanwhile, Alessandro Figali, a professor at the Federal Institute of Technology in Zurich and winner of the 2018 Fields Prize, participated in the event as a support guest, saying: 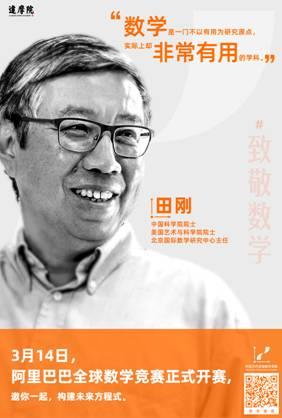 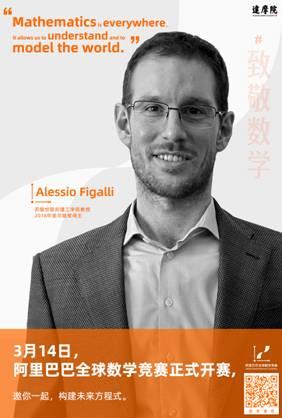 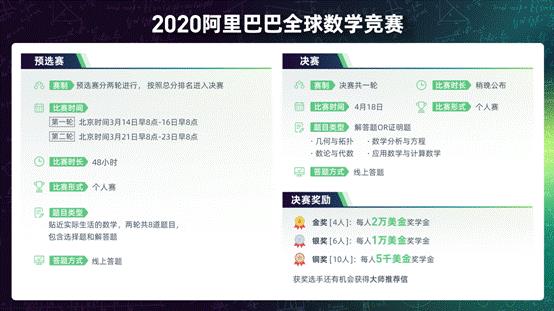 Alibaba Damo Academy said that mathematics is the foundation of all natural sciences and a powerful engine of scientific and technological progress. The research of cloud computing, artificial intelligence, chips, quantum computing and other cutting-edge technologies is inseparable from mathematics. As a high-tech company, Alibaba has the responsibility to lead the whole society to pay attention to mathematics, understand mathematics, appreciate mathematics, help mathematics, strengthen the cultivation of mathematics talents, and promote the original research and breakthrough progress of mathematics.

Related news
The linely group's best mobile processor of the year: God u Kirin 810 wins the title
"Generation God U" Kirin 810 gets The Linely Group's annual "Best Cell Phone Processor Chip"
Samsung releases over the horizon, the default ring tone in 2020: Based on nature
The second Alibaba global mathematics competition started as scheduled
In 2021, Alibaba global mathematics competition was launched, and 33 "top class" mathematics students formed a luxury proposition group
Hot news this week
The company announced the shipment data of 2021 Q1: the proportion of Huawei fell to the sixth place in the world at 4%
Sony's third generation noise reduction experience: comparable to the strongest combat power of real wireless noise reduction headphones
Henan satellite TV "Dragon Boat Festival wonderful tour" full version popular all over the network: netizens call content amazing
New people to do "new" business: preparing for the battle with Zhang Ying, a peach farmer in Yangshan
In depth cooperation with Huawei real hammer! BYD open recruitment of "Hongmeng development engineer"
In 618, big promotion came, beware of the trap of cheating by taking advantage of the official SMS of charging companies' platforms
Dragon Boat Festival colorful Luoshen amazing interpretation of underwater flying netizen: too beautiful, lost the language
Can you travel around the world without leaving home? Jingdong 618 Jingdong International gives you a fancy "flying" strategy
During the period of 618, Jingdong will issue a total of 10 billion consumption vouchers, which have benefited consumers in 14 places such as Beijing and Zhejiang
Is salty or sweet rice dumplings popular? E-commerce platform: the sales volume of salty rice dumplings is twice that of sweet rice dumplings
The most popular news this week
480000! Baidu announced the cost of the fifth generation shared unmanned vehicle for the first time
Windows 11 desktop window, taskbar first look: a variety of layout options
Return after 10 years! Windows 11 latest boot audio exposure: listen to it
Yixin technology won the honor of "2020-2021 (4th) China IC unicorn"
Which brand of vacuum cleaner is better? Who should buy vacuum cleaners and floor sweeping robots at the same price?
Shenzhou Wentian wechat adds time limited status "rush"
A moment in history! The successful launch of Shenzhou 12
Airpods 3 will be launched this year! Apple executives hint: it may integrate the bracelet function
The first man after Bill Gates! Microsoft CEO NADELLA will also be chairman of the company: the first time in 20 years
Domestic mining fails Huaqing: the price of graphics card is falling