Amd got a new overbalance order today,Building El Capitan supercomputing for DOE with Cray of HPE, with a budget of $600 million, AMD's next generation CPU and radeon acceleration card will be used, which will come out in 2023, with floating-point performance of 20 billion times.What are the specifications of El 13 Capital? Now there are more than 3 years to go, so the details of CPU / GPU are unknown. It can be determined that the third generation of infinity fabric bus is used. Each epyc CPU is equipped with 4 radeon insight accelerators.

For Supercomputing CPUs, it's now more reliable to say that the new generation epyc of zen4 architecture will be a new upgrade, and the platform will also be upgraded to ddr5 and PCIe 5.0. These advanced technologies correspond to the era of 10 billion supercomputing times, and can meet the requirements in performance and efficiency.

In the epyc server, the product corresponding to zen4 architecture is Genoa Genoa, Italian city, while the current epyc code is Rome, and there will be Milan Milan with zen3 architecture between them. Its basic specification is very similar to the current Rome II Xiaolong, which is also DDR4 memory and PCIe 4.0 bus and SP3 package interface, keep the platform compatible, it seems that they will focus on architecture optimization and performance improvement. 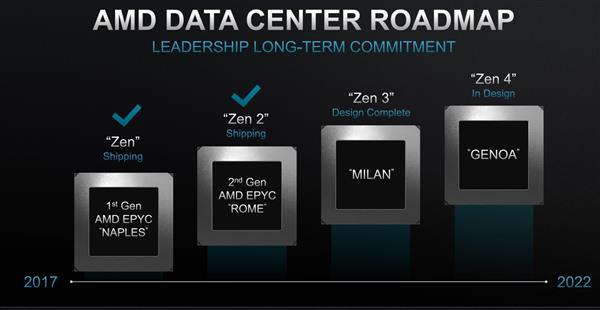 Now the biggest mystery is the architecture and process of Zen4 and Genoa processors, whether to stick to a maximum of 64 maximum of 64 cores or upgrade to 128 cores, whether to use five nm or the latest revelations continue to use seven nm of grinding, these two improvements affect the heart of A rice and the industry.

It is believed that everyone expects AMD to build 128 core 256 thread processor with 5nm technology, and continue to excel in high-performance computing. 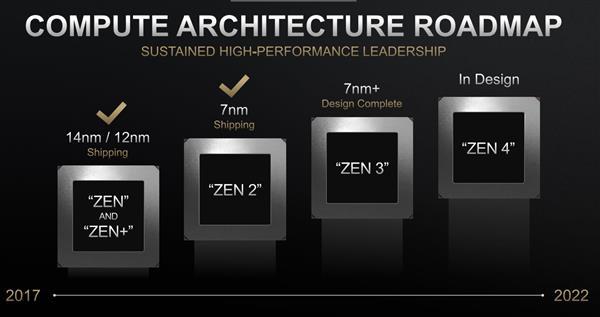 Finally, it will be revealed soon, said Forrest norrod, general manager of AMD data center and embedded businessAMD will announce the zen4 / Genoa processor at the upcoming analyst meeting, that is, this Thursday - it will be early tomorrow morning in China.

Related news
AMD sets the tone for the Zen3/Zen4 architecture: making important changes
Welcome AMD Zen4 Processor TSMC to Increase 5nm Production Capacity
Update of CPU,GPU Roadmap of AMD: hardware Optical recovery period in Zen4 Design
AMD is about to release zen4 architecture: 64 core or 128 core, 5nm or 7Nm suspense
Intel meteor Lake 13 generation core appears! 7Nm hard to carry amd 5nm zen4
Amd fourth generation Xiaolong exposure: 5nm zen4 architecture, 96 core, 12 channel ddr5
With 5nm zen4 in hand, AMD will return to its peak: recapture 25% of the server CPU Market
AMD official announcement: Zen4 architecture details coming soon! exciting
Easy 32 cores! The AMD Zen4 Ryzen™ 7000 has changed completely
AMD 5nm zen4 processor no longer lack? Test 3
Hot news this week
With the NIL technology, Canon wants to provide China with a lithography machine comparable to the EUV
Genius hacker Geohot promised Musk 12 weeks to fix Twitter search, but posted for help because he wouldn't react
Google's parent company is planning to cut tens of thousands of jobs
The Long March 9 is basically confirmed: the low-orbit carrying capacity of 150 tons can carry the entire space station into space
A small plane in the US has crashed into a 30-metre high voltage power line and got stuck: 80,000 people affected
Can recording others' wechat chat records be used as evidence? The Beijing Internet Court has an answer
Alibaba launched a new cross-border e-commerce platform in Spain, aiming to operate independently in the middle and high-end market
Google is concerned that Microsoft's acquisition of Activision Blizzard will affect the ChromeOS experience
The second generation Snapdragon 8 flagship! Mi 13 toughened film appeared: four sides and other narrow screen accounted for a stable ratio
A Tesla crashed into two cars in Taizhou, Zhejiang province, killing two and injuring one, police said
The most popular news this week
QQ membership via SMS has become a thing of the past: Tencent officials said the relevant business functions have been offline
Two men ransacked an Apple store and made off with more than 200,000 products: a textbook move by the employees
South Korea 2-1 Portugal repeat Asian miracle: Lei Jun with Xiaomi 13 thumbs up
The standard version is unbeatable and sells for 3,999 yuan for Mi fans
Two new Huawei devices are ready to launch: one is more creative
For the first time ever! NVIDIA graphics card to play the game flash screen must refresh the BIOS
Samsung Galaxy Z Flip5 exposure: Larger screen, fewer creases
What is this picture? Intel next generation Fever U also has 6 cores!
1W less than 40 cents 550W gold medal full module power 199 yuan RTX 3060 are enough
Viral 'Coronavirus Medicine Sequence' : Reliable? Experts guide the way