Today, the Hurun Research Institute released the 2020 Hurun global list of young people starting from scratch, which counted the billion dollar entrepreneurs under 40 (including 40) and starting from scratch in the world. The deadline for wealth calculation is January 31, 2020.

According to the report, 53 self-made billion dollar entrepreneurs under the age of 40 have been found in the world. They come from nine countries.The average age is 37, with an average wealth of 36.4 billion yuan. The wealth of 38 people on the list increased from last year ,18 of them new faces. The wealth of eight people declined from last year, while the wealth of the other seven remained unchanged. Last year's list of 10 people fell out this year, seven because they were over 40 and three because wealth failed to reach the threshold.

Compared with the past, China's self-made rich have increased by eight new faces, almost three times that of the United States. India added four, also ahead of the US. They made the first billion dollars in six years on average. There are four new faces in the top ten. The top 10 threshold is 33 billion yuan, down from 44 billion yuan last year. 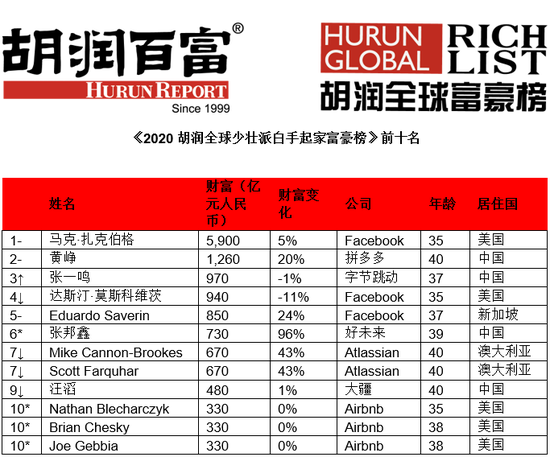 According to the published list, the top three are Zuckerberg, Huang Zheng and Zhang Yiming. Their wealth is 590 billion yuan, 126 billion yuan and 97 billion yuan respectively, among which Zuckerberg has become the richest self-made man of the post-80s generation for the fifth consecutive year with 590 billion yuan.

Huang Zheng, who is 40 years old at pinduoduo, grew 20% in wealth, ranking second with 126 billion yuan, and became the richest self-made man in China after the 1980s. Zhang Yiming, 37, jumped one place to third with 97 billion yuan of wealth.Byte beat is the second most valuable unicorn in the world, worth 500 billion yuan, ranking behind Ma Yun's ant gold suit (according to the 2019 Hurun global Unicorn list). 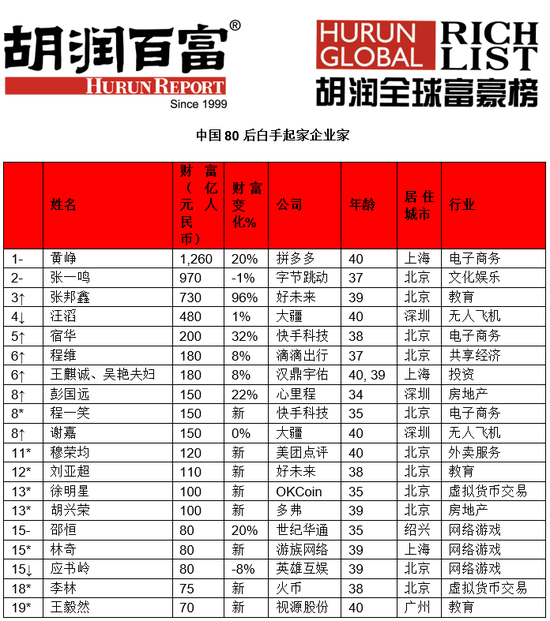 Following Huang Zheng and Zhang Yiming, Zhang Bangxin ,39, doubled his wealth and returned to the top 10 for 73 billion yuan, becoming the world's richest man in education. Wang Tao ,40, of Dajiang, who lives in Shenzhen, ranked ninth with wealth of 48 billion yuan. Dajiang created a highly automated civilian aerial vehicle, while fast-handed Suhua, Didi's Cheng Wei are also on the list. 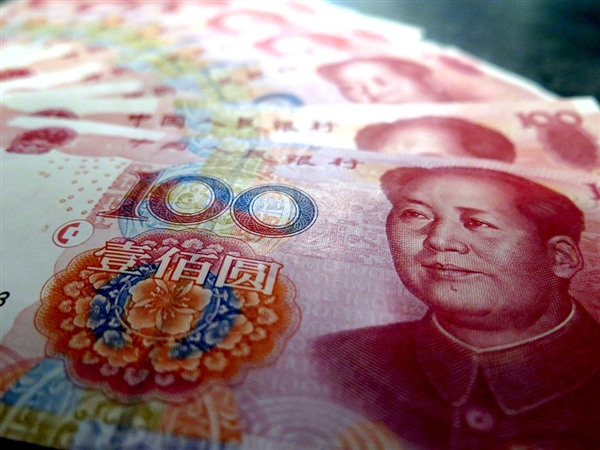 Related news
Foxconn has bought land in Vietnam: will iPhone "MADE IN VIETNAM" in the future? (figure)
Semicon China: Huawei and Exxon bring semiconductor intelligent quality inspection and measurement solutions
Maybe next year you'll get an iPhone 12 labeled "made in India."
Def con China restarts Baidu security to hold the world's first all VR geek conference with def con
Hot news this week
The company announced the shipment data of 2021 Q1: the proportion of Huawei fell to the sixth place in the world at 4%
Sony's third generation noise reduction experience: comparable to the strongest combat power of real wireless noise reduction headphones
Henan satellite TV "Dragon Boat Festival wonderful tour" full version popular all over the network: netizens call content amazing
New people to do "new" business: preparing for the battle with Zhang Ying, a peach farmer in Yangshan
An 18-year-old Japanese female painter is popular, and her painting level of mobile phone software is beyond imagination: beauty makes netizens sigh
In depth cooperation with Huawei real hammer! BYD open recruitment of "Hongmeng development engineer"
In 618, big promotion came, beware of the trap of cheating by taking advantage of the official SMS of charging companies' platforms
Can you travel around the world without leaving home? Jingdong 618 Jingdong International gives you a fancy "flying" strategy
Dragon Boat Festival colorful Luoshen amazing interpretation of underwater flying netizen: too beautiful, lost the language
During the period of 618, Jingdong will issue a total of 10 billion consumption vouchers, which have benefited consumers in 14 places such as Beijing and Zhejiang
The most popular news this week
480000! Baidu announced the cost of the fifth generation shared unmanned vehicle for the first time
Windows 11 desktop window, taskbar first look: a variety of layout options
Return after 10 years! Windows 11 latest boot audio exposure: listen to it
Yixin technology won the honor of "2020-2021 (4th) China IC unicorn"
Which brand of vacuum cleaner is better? Who should buy vacuum cleaners and floor sweeping robots at the same price?
Shenzhou Wentian wechat adds time limited status "rush"
A moment in history! The successful launch of Shenzhou 12
Airpods 3 will be launched this year! Apple executives hint: it may integrate the bracelet function
The first man after Bill Gates! Microsoft CEO NADELLA will also be chairman of the company: the first time in 20 years
Domestic mining fails Huaqing: the price of graphics card is falling