The outbreak started the starting gun, and Alipay opened its face. 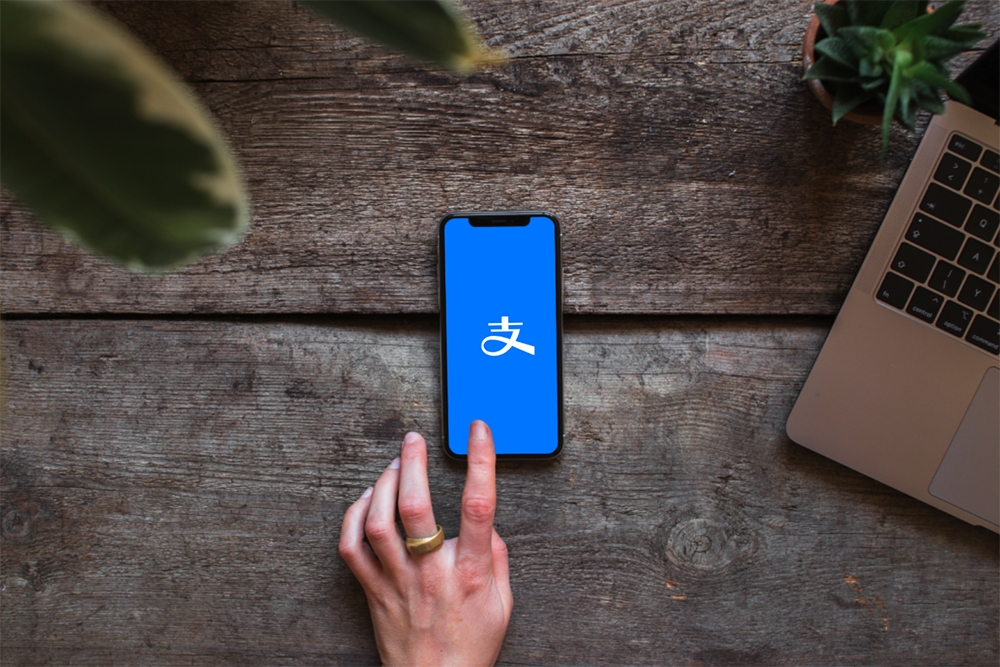 The special meeting during this epidemic is directly related to the impact of the development of the epidemic. Hu Xiaoming, CEO of ant financial services group, said that from January 26 to now, 200000 merchants have quickly entered hungry through takeout. Tens of thousands of roadside shops, catering enterprises, five-star hotels, even literature and art bookstores, all hope to resist the cliff like decline of offline customers and sales by taking out.

Hu Xiaoming announced at the meeting that in the face of the opportunity of transformation and upgrading of service industry, Alipay has been upgraded from a financial payment platform to an open platform for digital life. Alipay's slogan has also been upgraded from "paying Alipay" to "living well, Alipay". In a closed door meeting at a relatively early stage, including AI fan and other media, Hu called the upgrade Alipay's biggest challenge in 15 years, no less than from the PC era to the mobile Internet era. " 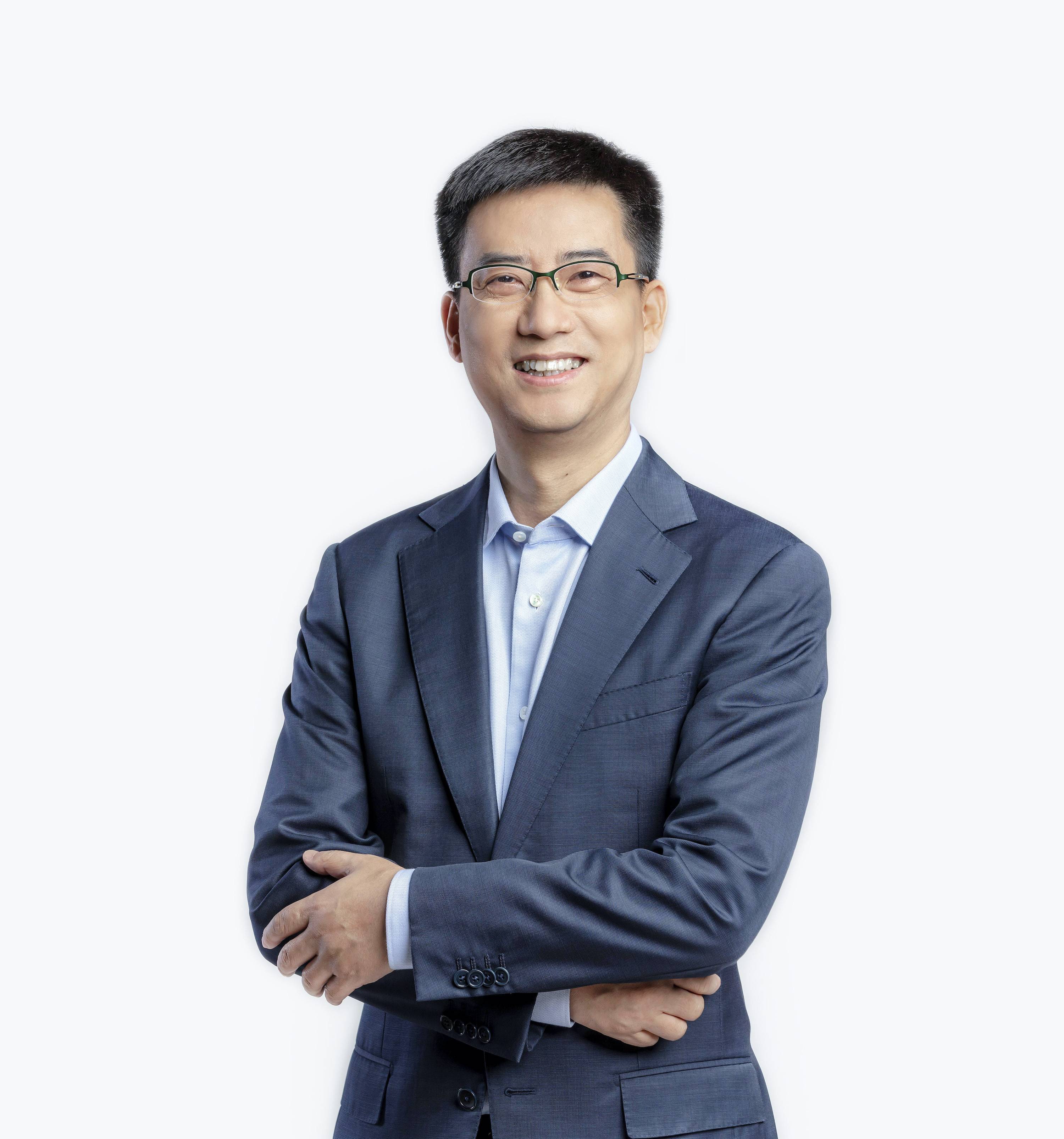 The most intuitive change is Alipay app. The city's entrance entrance is increased by the change of the home page interface. In some big cities, the entrance of takeaway, delicacy, entertainment, hotels, movies and city center is also added. In addition, Alipay's search system and supporting policies are further upgraded, with the purpose of helping the service providers, brands, code dealers (small and micro operators with two-dimensional code) to make the figures. Transformation and growth.

The ultimate goal of Alipay is to take on an important role in the process of offline service online, and behind it is the value of 50

The latest Alipay app version has been upgraded to 10.1.88, and Alipay's brand matching has also changed, from the elegant blue to the deeper, and the white contrast is more intense. Hu Xiaoming called it "Alipay blue", which is "very permeable, more penetrating, saturated and more vigorous than the original Alipay color".

The bigger change is Alipay app home page, the upper left corner adds the city entrance, according to the location default display, users can also manually select. Delicacy City, Chengdu, Guangzhou, Shanghai and other big city will be the top five buttons for takeout, food / entertainment, hotel accommodation, movie performance and Civic Center at the top of the home page. They will be served by hungry, word of mouth, flying pig hotel accommodation, ticket checking and Fu Baozhong's "City Service". Click on the first four services, and the top location will display "information display service provided by Alipay". 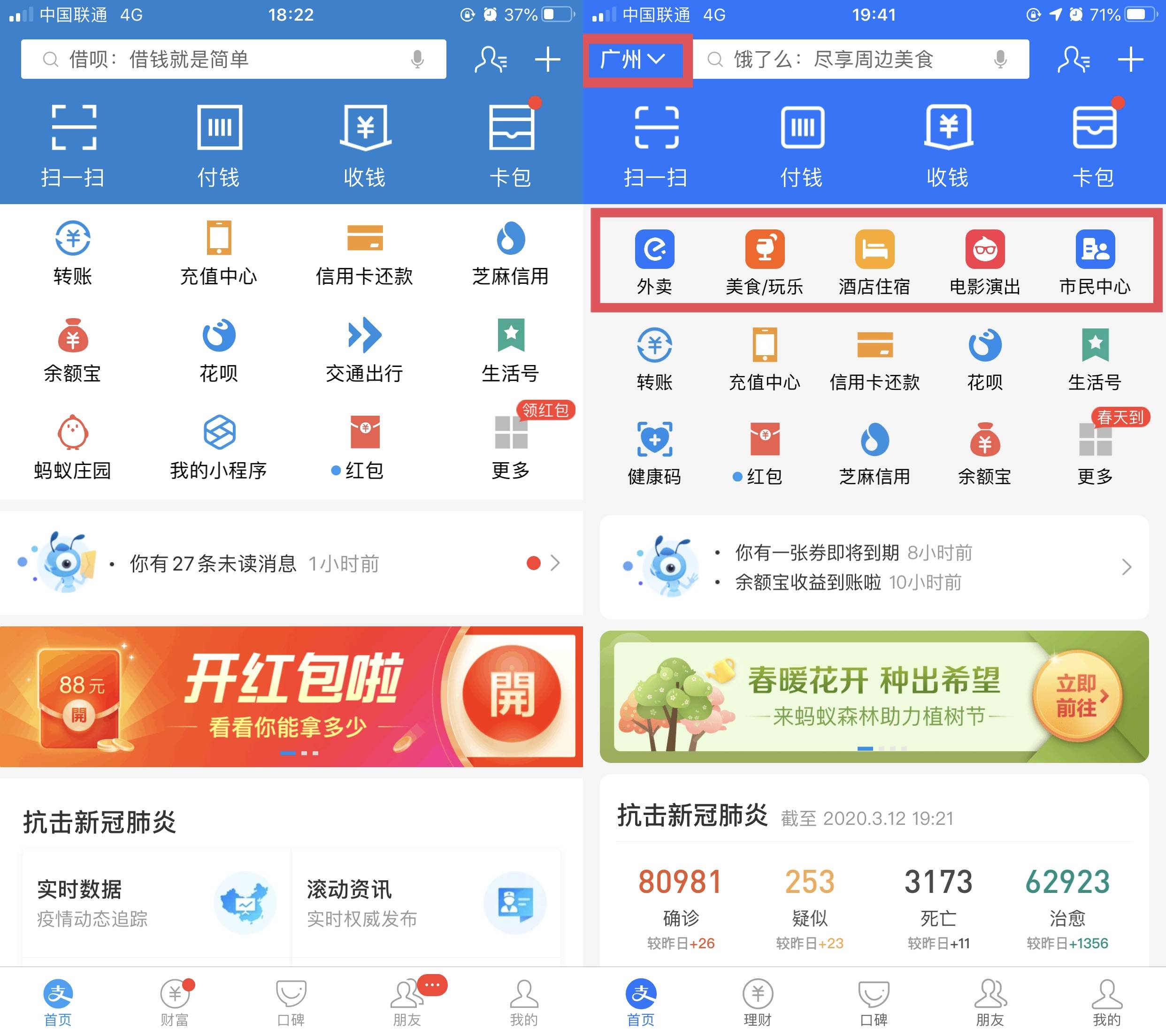 This also seems to mean that in the future, there may be more third-party services, even non Alibaba services, appearing here. Hu Xiaoming gave a positive response to this, which is Alipay's goal of creating a digital life open platform, but "this goal is not achieved overnight. I estimate that it will take at least 3 years for us to really taste it." "

In the current version, the rest of Alipay app home page "my application" has not changed much, mainly composed of message notification, banner advertising, fortune life, value group purchase and daily robbing. However, in an earlier version of the internal test, there was a larger revision of the home page. Under the banner advertising space, there was a restaurant recommendation in the form of picture information flow, with the words "enjoy the evening" and so on.

Mr hu said the recommendation was based on three factors: first, location, because the service ultimately depends on location; second, time, many services have time attributes; and third, customer needs. He also stressed that Alipay's algorithm would treat different services equally ," hungry and hungry friends

If Alipay's revision and the US mission become more like, the "civic center" provided by city services is the unique advantage of Alipay. Social welfare, provident fund, life payment, car owners' service and immigration service can solve the daily needs of many citizens online.

In addition, Alipay app has a minor change. The second buttons of the navigation bar under the front page are changed from "wealth" to "financial management". In the "financial management" interface, you can pull down the contents of balance treasure, flower chant, borrow money and reserve fund, while in the old version of the "fortune" interface, you can not slide down, you can only see the total assets. 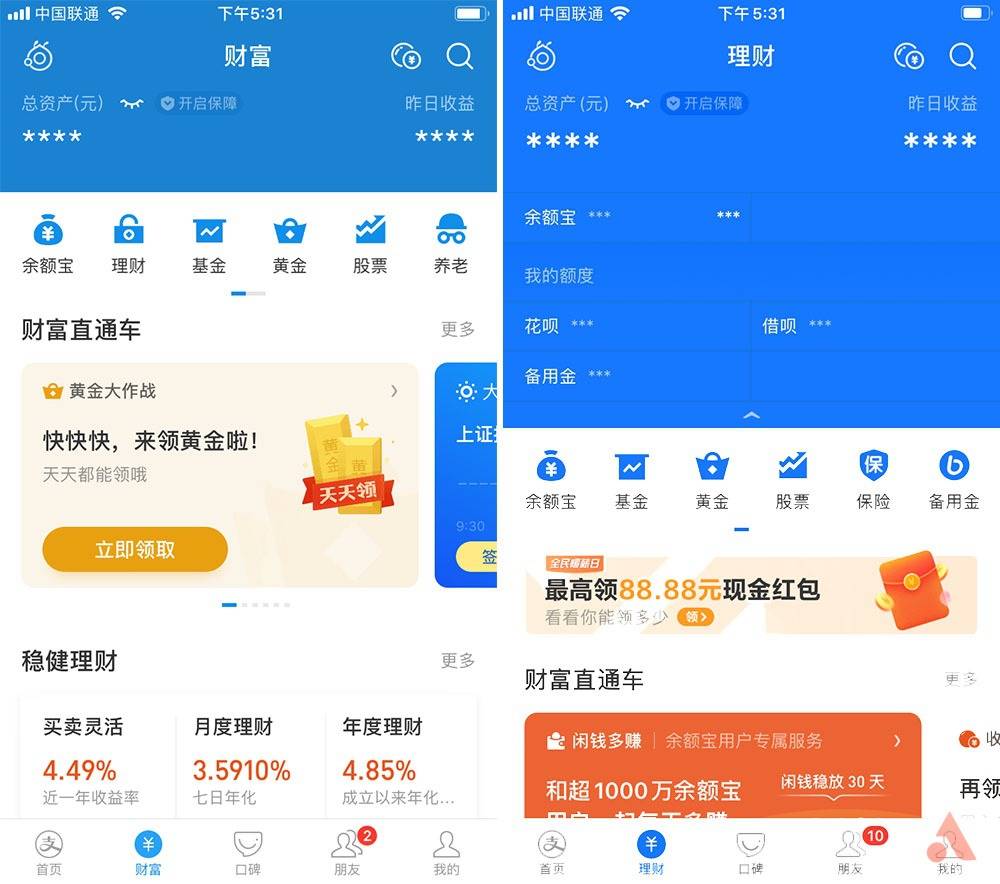 The local life services, government and people's livelihood services and financial services together constitute the "open platform for digital life" in Alipay vision, with the goal of trillions of offline services.

In order to achieve this vision, Alipay has also made many rounds of personnel adjustment and organizational transformation. In January this year, Hu Xiaoming, who was transferred from Ali to the ant's gold clothing, began to serve as the chairman of Ali local life service company. The local life service was established in 2018, and was merged by word of mouth and hungry.

On March 6, according to several media reports, Ali's local life service company adjusted the structure of hungry and word-of-mouth, merged its business products into a large team, and adjusted them into three major business groups: home, store, business center and innovation.

What is "digital life": online and offline integrated services

Why do offline businesses try to do online business? This epidemic gives an answer. The precipice drop of offline passenger flow is a severe test for all offline businesses. Home service, online ordering, picking up goods at stores, and online shopping mall are the common choices for businesses carrying out "self rescue".

Hu Xiaoming revealed at the closed door communication conference that according to Alipay's data, the business improvement during the epidemic period was the integration of online and offline businesses, service providers, suppliers and Internet based community services closely related to geographical location attributes. For example, a cosmetics brand called Lin Qingxuan used to sell goods mainly through tmall stores and offline stores. During the epidemic, it began to try to sell goods live. At present, 70% - 80% of its business is achieved through live broadcast. 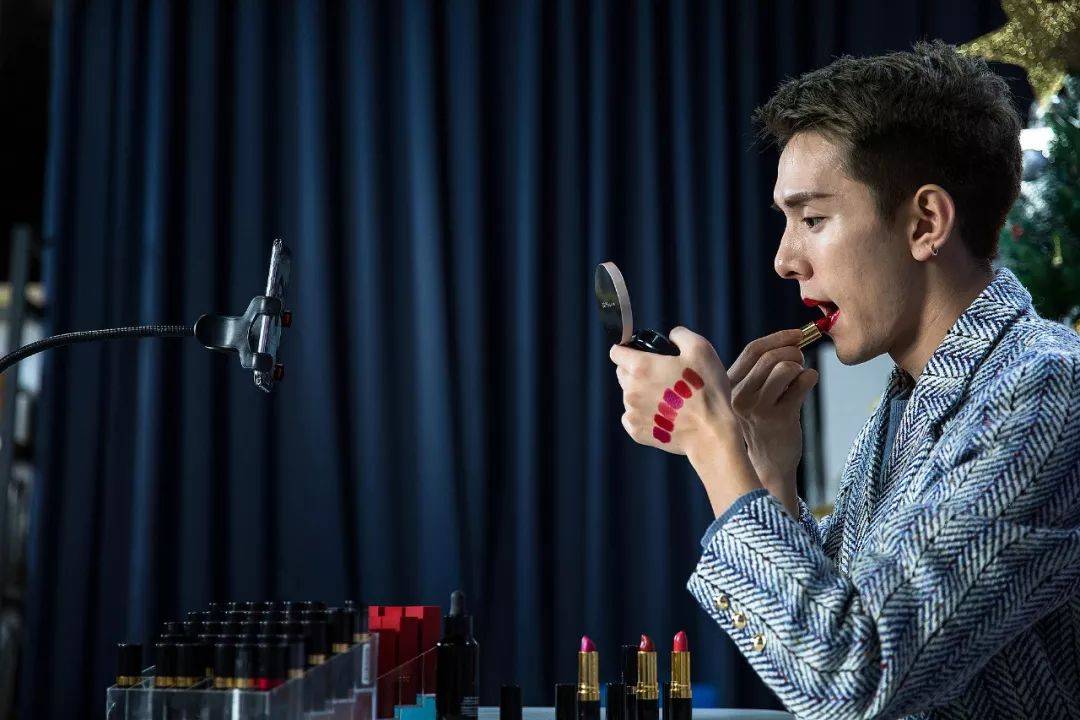 What role will Alipay play in this process?

In September 2018, Alipay small program was officially launched. Jing Xiandong, chairman of the ant gold clothing company, said at the time, "small program is one of the most important strategies for Alipay in the next three years". Alipay small program business department was established and worked in Alibaba for more than 10 years. He Yongming, who was responsible for technology, products and operation at different times, was appointed general manager of the division, and where 2019 In, it continued to reveal to the outside world that the small program wanted to take the information of the ecological open route. According to the latest information obtained by AI fan, up to now, the number of Alipay applets has reached 1 million 700 thousand.

Alipay small program is actually a tool for businesses to connect consumers and Alipay, and even Ali. Consumers can experience consistent services in different operating system and even terminals (self-service ordering machines, intelligent cash registers, etc.). Merchants can access financial capabilities such as flower loans, loans and so on by using small programs, as well as poster, membership, coupons and other marketing capabilities. Power. 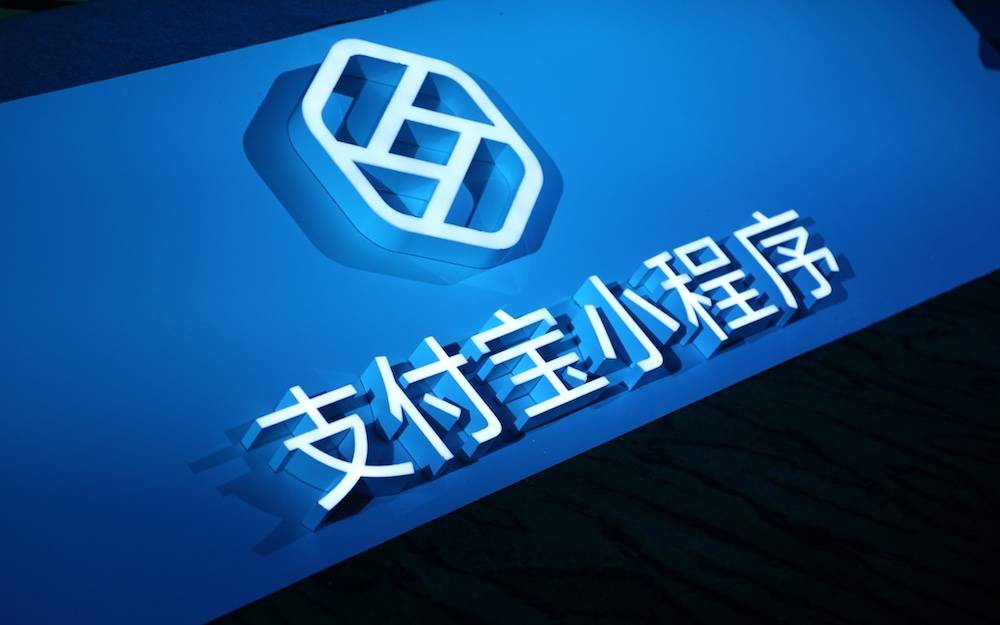 In 2019, Alipay applet was upgraded to Ali applet. The High German map, Tmall, micro-blog, even nail, hungry, Tmall spirit, idle fish and so on in Ali system started or were about to get through with Alipay little program. For users, they could get more services directly in the above applications; for merchants, this meant the touch up and full link marketing of the scene.

Alibaba is good at making a clear strategy, and then firmly along the strategy forward, Hu Xiaoming believes that the current digital life upgrade is still only the initial stage of content integration, service integration, whether the future use of Alibaba supply chain, member operations, financial services, live broadcast ability.

What is "openness": the relationship with meituan and the similarities and differences with wechat

Another key word in Alipay's new strategy is "openness."

This means that Alipay hopes to use ecological play, the introduction of more third-party merchants, service providers, partners to achieve the goal. "From the financial payment platform to the open platform of digital life, we hope to be able to grow more and more hungry in Alipay. Meituan, more and more flying pig Ctrip, to provide more and more digital life services for Alipay members ," he said

This is believed to be the first time in the past three years that Alibaba executives have mentioned positively a possible new relationship with meituan. At the first Wuzhen Internet Conference in 2014, Ma Yun made similar moves. In his "debate" with Liu qiangdong, he said that Alibaba's goal is to cultivate more Jingdong. 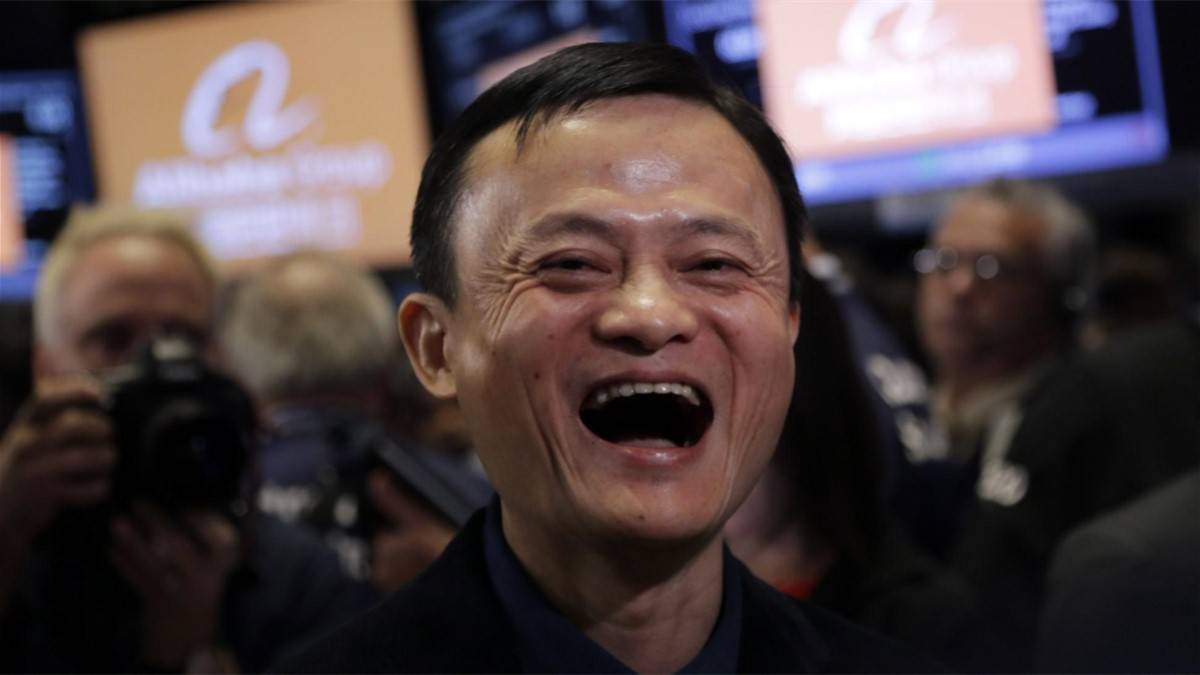 Although the Jingdong did not have a relationship with Alibaba after that, just as the US mission is unlikely to "settle" in Alipay, Hu Xiaoming hopes to convey Alipay's "real openness" attitude. "Other local life service providers, of course, can come in to meet Alipay's open standards. I am open-minded. "

Hu Xiaoming even took the initiative to take the analogy of WeChat. He hoped that Alipay could carry more "hungry" and "US group" in the future, so long as these merchants could abide by the established unified open standards. "Like WeChat today, there will be open standards for WeChat. "

Burger King is one of the first fast food chains that have access to Alipay's small program. Its digital marketing director at Alipay has even described Alipay as a "multi center mode". Besides Alipay's home page, it can be a small entrance application in Tmall, hungry, Alipay, and other Ali applications, while in the Alipay, flowers, ants, forests and so on are small. The channel can also bring tens of millions or even hundreds of millions of traffic, and is also a very valuable central node for the brand. 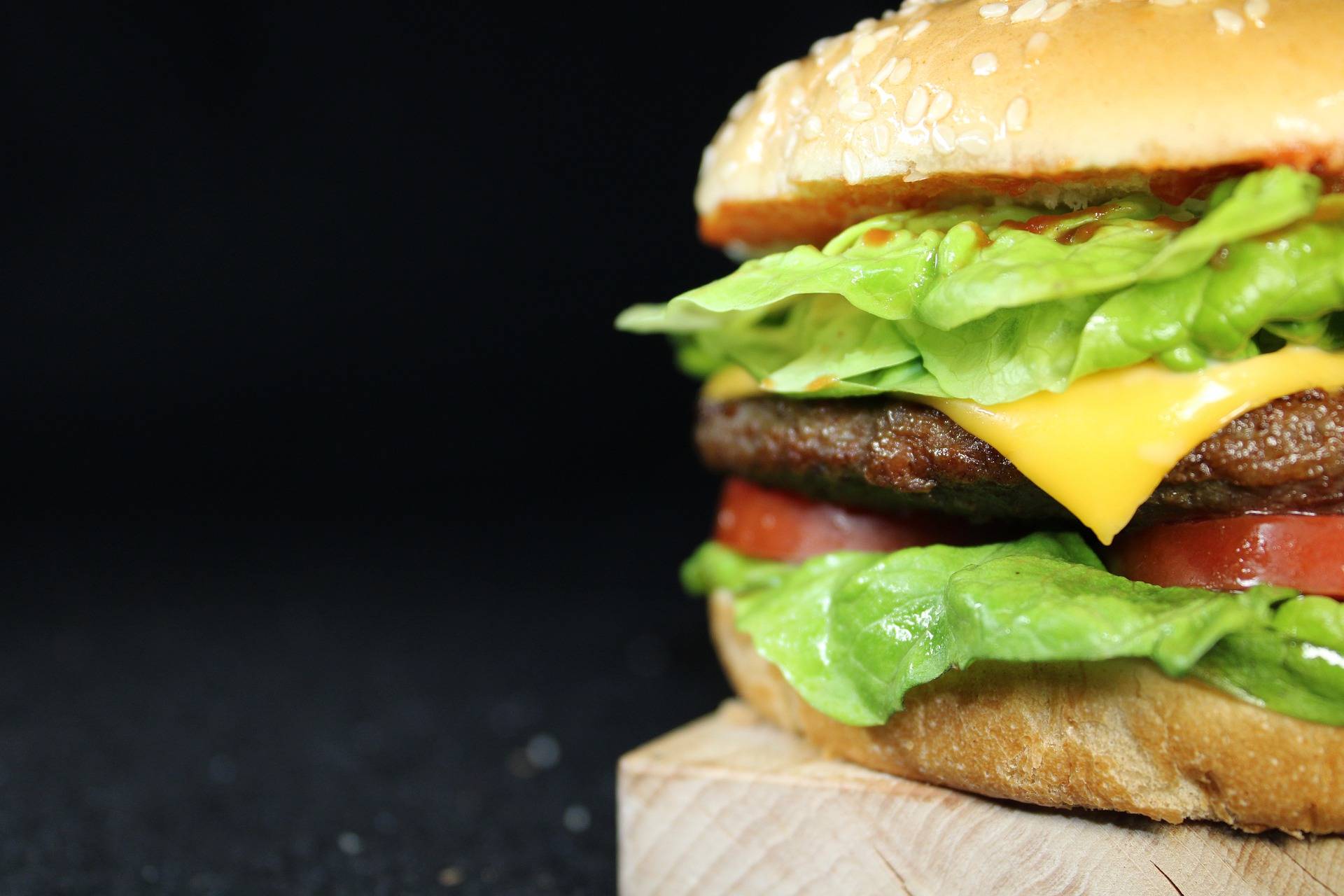 This revision is also a further release of Alipay centralized traffic, local life services in the business, may take time and geographical location attributes as dimensions, recommended by intelligent algorithms to potential consumers. In addition, alipay also provides life number, as well as including alipay members, short video, data analysis and other capabilities, merchants can precipitate their own customers and members, which is called the "self-operating ability" of merchants. In Alipay's view ," central flow supply decentralized business operation "is its core advantage.

Alipay idle away in seeking pleasure from QQ, becoming the second super app in the country, which is the advantage of its open digital living platform. However, changing the minds of users and eating and drinking in a payment tool is the great challenge Alipay faces, according to QuestMobile's latest data.

For such a problem, Hu Xiaoming cites tmall's example. Growing tmall of B2C from Taobao of C2C is a great transformation of users' minds. "We are always facing such challenges, but driven forward by the needs of consumers and the market. "