Last night, Microsoft officially announced the latest upgrade of DirectX 12 - DirectX 12 ultimate, which can be said to be the most significant update of DirectX 12 since it was officially launched in 2015. It has added many new features. In fact, some of them have been previewed in October last year.

In the future, the logo may be added to the box for products that support dx12 ultimate

All right, the official blog gives some details about the new features, so this article will try to interpret them.

DirectX raytracing (DXR) is a new feature introduced by Microsoft in 2018 for DirectX 12 to support real-time ray tracing processing. The 1.0 version of DXR is based on the software features. It can be said that it is designed around the hardware implementation of Turing architecture. At that time, it did not consider how to realize optical pursuit from the perspective of software development. Version 1.1 extends DirectX 12's ray tracing features to make it more efficient and developer friendly. There are three main points:

Shaders running on the GPU can call raytracing directly in version 1.1 without turning back the CPU. This feature is very useful for adaptive ray tracing scenes, especially for culling, sorting, classifying and thinning based on shaders. Basically, the ray tracing work in the future can be prepared on the GPU and generated immediately.

When players move in the game world and new objects become visible, the streaming engine can load new ray tracing shaders according to the screen demand at this time, so as to improve the efficiency of the processing.

Variable rate shading is an accelerated coloring feature first introduced by NVIDIA on its Turing GPU. For details, please refer to our classroom article: "super class (212): why can VRS variable rate shading improve the frame number?"? 》, let's talk about its principle here, instead of going into details.

When VRS is not turned on, that is to say, under normal circumstances, all pixels of a frame are independently colored; when VRS is turned on, the original independent pixels are divided into pixel blocks, which share the coloring results. At this time, GPU will assign different shading fineness to all pixel blocks according to the importance level set by the programmer. Take the above picture as an example, the pixels of the vehicle and the vision part are still independently colored, but the pixel blocks of the fast changing road and the roadside are all colored together. At this time, because the computing resources of the video card are saved, the frame number of the game will be increased.

Mesh shaders: the foundation of the next generation geometry pipeline

In the past two decades, the traditional geometry processing pipeline has increased several stages, but its core idea is still based on the traditional rasterization pre coloring method, which is too complex today and drags down the processing efficiency. Both hardware and software developers want to change this situation, so DirectX 12 introduces mesh shader, which provides developers with unprecedented programmable capabilities.

In the original pipeline, the parallel ability of GPU hardware is hidden, or it is automated. The hardware will help package operation and execute it in parallel, which is very efficient, but there are also problems - not enough flexibility.

Mesh shader completely changes this process, it is no longer a single function for a single vertex or entity, but works in the whole computing thread group. In one stage, each thread of mesh shader is aimed at a vertex, while in another stage, each thread is aimed at an entity. The memory of the whole thread group is shared, and the flexibility of access is very high. At the same time, the developer has more control over the hardware, and even can inspire new technologies, saving memory usage and memory bandwidth. 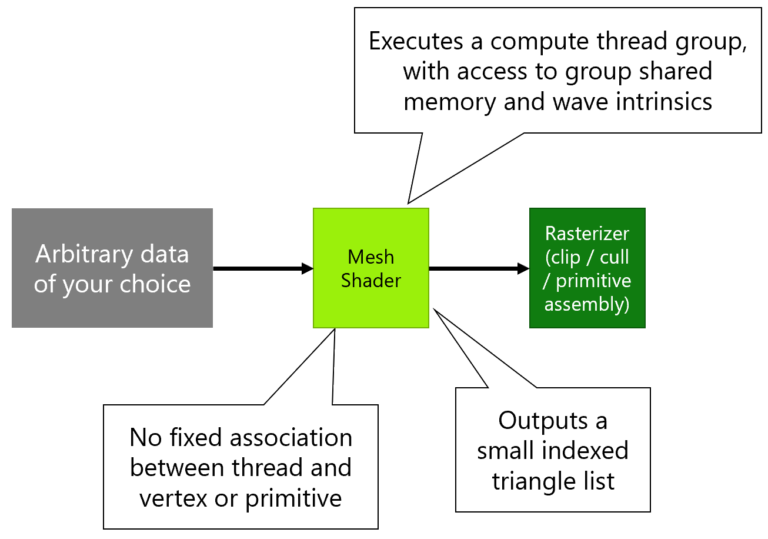 The last big feature is sampler feedback. First, the effect: better visual quality, shorter loading time and less carton. Its core idea is actually to let the program load only the necessary textures and give the resources to the more needed places.

Sampler feedback allows the game engine to track how the texture sampler is used, and let the latter provide feedback to the engine by generating a "feedback map" Map), which records the different resident levels of different texture regions, and then the program can make decisions based on these feedback information - including how to use the texture sampler and what resources to keep in the display memory. This is more accurate than the original process and can better allocate computing resources. In short, its actual effect isRendering larger, more detailed textures with less memory。

In addition, the sampler feedback also allows a new technique, texture space coloring. It can shade objects without rasterizing them. The idea is to cache and reuse the shading results to reduce the computation of GPU.

The above is a detailed interpretation of DirectX 12 ultimate. As I am not an industry person, I only understand these features until now, which inevitably leads to cognitive errors. Please correct me.

Related news
Microsoft released DirectX 12 ultimate, what changes has it brought?
Explain DirectX 12 Ultimate - a big upgrade for future applications
Why is Microsoft's new DirectX 12 a big leap forward?
Hot news this week
Biden signed a chip and scientific bill, a video call of WeChat iOS internal test suspension window, the advanced CPU caused Win11 to be difficult to use, Huawei new machines enter...
How to regulate the "broken card" operation to crack down on electrical fraud to prevent "accidental injuries" with cards?
Musk's eyes! Lei Jun released a full -size humanoid robot Xiaomi self -developed strength explosion table
Japan has confirmed that China has overtaken the US for the first time in the world's top three indicators of scientific papers
iPad 10 will be absent from iPhone 14 conference: October appeared on Apple's last non -comprehensive tablet tablet!
Kuaishou TOB business Yu Bing: Self -developed chips or mass production after the end of the year, the video must be turned into light industry
The three major indexes of the US stocks opened sharply: ROBLOX fell more than 4%, Twitter and Tesla rose more than 3%
The global streaming media have increased the animation circuit is becoming a new "breakthrough" for Youaiteng
After selling Tesla for $6.9 billion, Musk said he was not selling it, but a survey said he was still selling it. The title of the world's richest man may not be guaranteed next ye...
Meizu Pandaer Great: All products are reduced by 200 and 30 -containing mobile phone cases, heat dissipation back clamps
The most popular news this week
Pet dog infecting monkey acne suspected "Human Poor" American CDC Reform Control Guide
Space Launch System to Fly for First Time
Tencent's second-quarter net profit fell 56% from a year earlier to 18.6 billion yuan
Fabless customers cut back on chip orders affecting Q4 capacity utilization
Washington's suspicion of TIKTOK exacerbated: How will the Bayeon government weigh it?
Pinduoduo launched its cross-border e-commerce platform in the United States in September
Put an SSD in your phone: from 2,499 yuan
China's largest general purpose drone! The first five flights were successful
IPhone 14 to be released alongside Huawei Mate 50: Which bangs do you choose?
Tencent's agent of the Russian war online game announced the suspension: Customs Customs in October