The dark mode of IOS wechat online: is it "advice" to apple?

On March 22,2020, WeChat launched the iOS 7.0.12 version, officially supporting dark color mode, users can go to the iPhone settings to adjust the display and brightness to the brightness.

If closed, in the same way 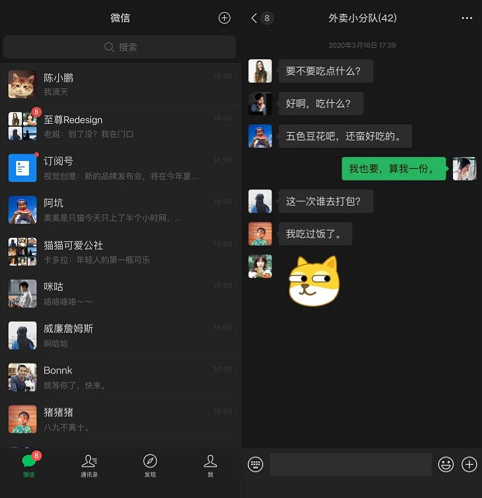 However, Mini Programs, nearby restaurants and other pages are still white background effect, has not yet adapted to the dark mode.

In addition,At present, wechat dark mode only supports IOS version, and Android version has completed grayscale test, and will go online in full.

According to Android Developer documentation, dark mode has many advantages, such as improving the battery life of mobile phones, improving the visibility of people with strong light sensitivity and low vision, and being suitable for low light environment.

Moreover, UI designers Ilke Verrelst emphasize in their article The future is dark》,Dark mode has become the development trend of product design, which is also confirmed by IOS 13 and Android Q online dark mode. 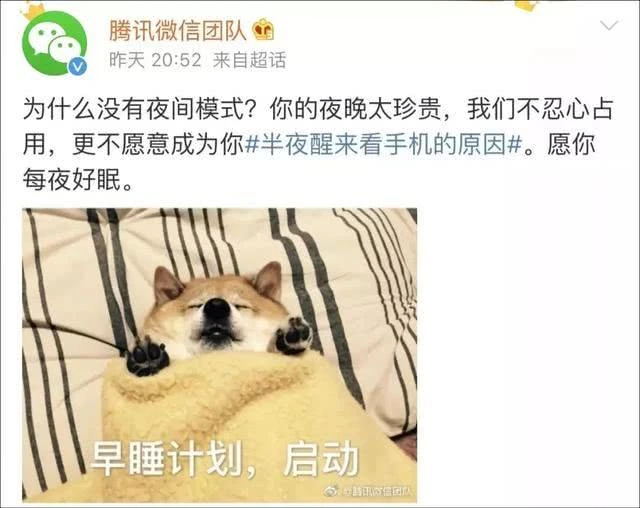 However, WeChat has not previously recognized the need for a dark model. April 4,2019, fo

Your night is so precious that we can't bear to occupy it, let alone become the reason why you wake up in the middle of the night to watch your mobile phone. May you sleep well every night.

Apple officially launched the iOS 13 system on September 20,2019, and the dark color model became one of the main push features. Officials say that all App built using iOS 13SDK will run in dark mode after users enable dark mode.

On March 4, 2020, apple updated the app store audit guide, and the announcement proposed:

From April 30, 2020, all iPhone apps submitted to the app store must be built using the IOS 13 SDK or later.

There are even reports that if the app in the app store does not support dark mode, it may be forced off the shelf by apple. 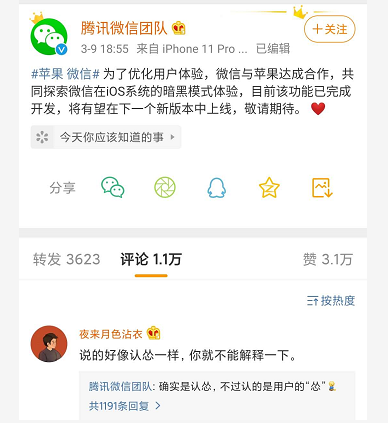 On the fifth day after Apple's announcement, WeChat's team's attitude to the dark pattern took place

In order to optimize the user experience, wechat and apple have reached a cooperation to jointly explore the experience of wechat in the dark mode of IOS system. At present, the function has been developed and is expected to go online in the next new version. Please look forward to it.

For this change in WeChat, some netizens called it

It's a recognition, but it's a user's

Related news
The official version of iOS 13 releases the 6S or newer models of the iPhone, which can be upgraded
The hidden item tracking tag in iOS 13 has now been renamed Apple Tags
Apple requires all apps to adapt to IOS 13 night mode: wechat will be forced off the shelf?
compromise or trend? WeChat iOS version online dark and dark
The dark mode of IOS wechat online: is it "advice" to apple?
Hot news this week
Apple's share price has been hit hard: 5g iPhone may have to wait more than a year
2.33ghz Sony ps5 with AMD chicken blood optimization
Sony set up a $100 million global rescue fund to fight the covid-19 epidemic
HP releases the energy 17 upgrade with 10 generations of core processor and 17 inch 4K display
Us zoo confirms a tiger positive for new crown virus after pet cat
Huawei's new machine exposure: 55 times of ultra far zoom is better than P40 Pro
Intel is expected to release comet lake-s desktop processor by the end of this month (Figure)
Samsung is about to release its first financial report of this year: the decline of mobile phone sales is a foregone conclusion
Samsung electronics develops its own foldable mobile screen to reduce the cost and meet the demand
The CEO of Tencent chenghuya, the largest shareholder, wrote that the company maintained independent operation
The most popular news this week
625 game cards of man's body were seized by customs
Microsoft believes that coronavirus will forever change the way we work and learn
New research finds that fake fingerprints can unlock up to 80% of mobile phones
The novel coronavirus pneumonia epidemic causes Amazon shopping experience to be different from normal.
"Assassin's Creed 2" opened on April 14 to receive multiple series of free games for promotion
If you want to buy amd sharp dragon, you must pay attention to the memory frequency: ddr4-3200mhz, greatly improved
Lu Qi's latest thinking: what are the digital innovation opportunities in China under the epidemic?
Huawei P40 Pro evaluation: top image power shaping annual high quality choice
No longer pay attention to Luo Yonghao's return to the nature of online Red: I can bear countless failures
Huawei P40 Pro: amazing photos "night vision" is still powerful