Affected by the epidemic, Samsung may close LCD factories in advance by the end of this year, and China will account for more than 80% of the world's production capacity

Affected by the epidemic, Samsung shows that SDC is speeding up its process of shutting down LCD production capacity and switching to OLED production. The plan of three large LCD panel factories in South Korea will be advanced to the fourth quarter of 2020, including Suzhou 8.5 generation line, which has not been reported to shut down before.In 2019, SDC's capacity area of over 7 generations of large-scale LCD in South Korea accounts for about 12.2% of the world's total, and the proportion of 8.5 generations of LCD in Suzhou is as high as 15.7%. Closing the plant ahead of time is bound to have a huge impact on the global panel supply structure.

According to Korean media EBN, SDC will close the factory in advance and sell LCD production equipment of Korean production line. When l7-1 was closed in 2016 and part of l8-1 production capacity was closed in 2019, some equipment was sold to some manufacturers who want to enter LCD industry quickly. However, under the pressure of industry expansion, it may be difficult to find a suitable buyer and choose to abandon directly. Suzhou plant is in good condition and may be sold to Chinese companies as a whole.

The early closure of SDC means that the global large-scale LCD panel will shift from the accelerated competition between China and South Korea to a dominant situation in mainland China. In the global LCD production lines with more than 7 generations, the proportion of the capacity area of Chinese manufacturers will further increase from 44.8% in 2019 to 53.3% in 2020. With the gradual completion of the closing of SDC plants, the proportion will also leap to 65.3% in 2021. 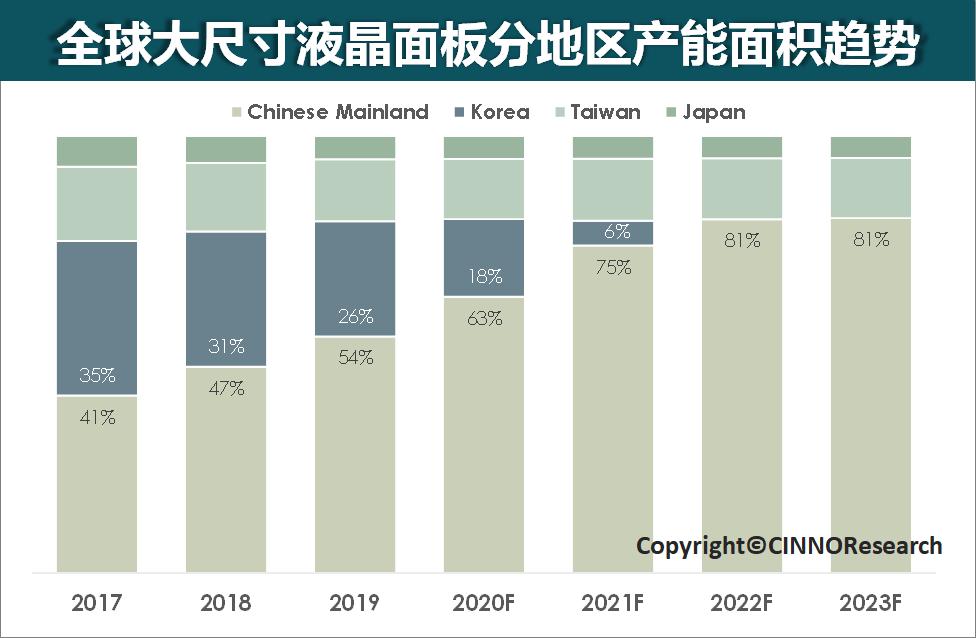 From the end of 2019 to February 2020, the price of large-scale LCD panel had a trend of price recovery for several months. After 2020, the epidemic broke out in China and South Korea in the early stage, which made the industry worried that the LCD display supply gathered in the two countries would be seriously affected. Therefore, the downstream started the mode of hoarding. It was once said that Samsung might take a more gentle way of production reduction, so as to For this round of panel price increase.

With the development of global epidemic, the supply chain has to make the fastest response decision. Since March, the epidemic situation in mainland China has been gradually controlled, and the production has been resumed actively. South Korea has also taken very strict control measures. The panel supply has not been greatly affected. However, the number of infected countries in the world has increased sharply, especially in Europe and the United States, which has rapidly deteriorated beyond expectations, leading to the cancellation of many international events and exhibitions. Many countries have begun to close international routes and blocked international trade exchanges , seriously affecting the supply side and the demand side.

CINNO At the beginning of 2020, research has made three kinds of predictions on the closing of Korean enterprises. At present, the situation is closer to the conservative prediction, that is, the global economic instability caused by the epidemic continues to worsen, greatly weakening the LCD demand. Even if Korean enterprises rapidly cut off their LCD production capacity, the LCD supply-demand ratio will further rise in 2020, seriously oversupply, resulting in the panel price and the panel manufacturer's rate of activity The panel factories with low cost and small scale are under great pressure. Whether the product structure can be adjusted in time, adapt to the special display demand under the epidemic situation, and maintain good cooperation with customers and supply chain will become the key to the survival of panel factories under the background of the epidemic.

Related news
LCD cool: Samsung closes another 7-generation factory
Affected by the epidemic, Samsung may close LCD factories in advance by the end of this year, and China will account for more than 80% of the world's production capacity
Chinese manufacturers account for more than half of Samsung's LCD panel factories in China and South Korea will be completely closed this year
Samsung quit LCD ahead of time till the end of this year to enter the "China era"
Samsung quit LCD industry in an all-round way. Has LCD gone?
Samsung shut down the factory and no longer produce LCD panel: all purchased from sharp in the future
China's LCD dominates: BOE's LCD panel shipment volume and area in the first quarter ranked first in the world
Samsung's display screen business lost a lot. South Korea quit LCD manufacturers?
Semicon China: Huawei and Exxon bring semiconductor intelligent quality inspection and measurement solutions
Samsung's liquid crystal panel workers have been diverted from LCD production
Hot news this week
Heavy weight! Apple M1 exposes the first high-risk vulnerability: discovered by Chinese
Overseas sales of Chinese bicycles are crazy: nearly 16 billion yuan worth of exports have been ordered to the end of next year
IPhone 12 screen green: I choose not to forgive it
Only mobile phones can charge quickly? Huawei matebook X's dexterous and fast charging liberates your endurance anxiety
Lottery mode will be opened: it is reported that apple is looking for Samsung OEM M1 TSMC 5nm orders, accounting for only 25%
China Mobile Partner Conference is coming. It's so simple to start 5g life
The report says the world's largest producer of plastic waste is the United States: serious environmental damage
Improve the efficiency of diagnosis and treatment, improve the experience of medical treatment Baidu health won the "2020 Best Health Platform Award "
Philips show HDMI acousto optic synchronizer lights up family entertainment space with full scene light
Tencent is punished by Internet
The most popular news this week
Huawei once again: we really do not build cars to help you build good cars
Xbox Series X play call of duty 17" brick "T group: under investigation and repai
9.9 yuan, python, 25000 per month? The truth is cruel netizen: not as good as station B
Windows 10 now supports more device driver updates
Full exposure of RTX 30 notebook graphics card
Short Tesla is like fighting against the Fed?
The secret of Xiaomi becoming the biggest black horse is in the best financial report
The battery mode of Ruilong 4000 notebook is inferior to Intel's 11 generation core? Linux platform test is not quite true
Linksys velop tri band mesh router now supports apple homekit
Easy job search dog recorder S1 helps you tear off the "social animal" label