1、 The Ruilong 4000 series notebook that day and night look forward to finally arrive!

If there had been no accident, the new generation of sharp dragon 4000 series mobile APU should have met you earlier. This period of time seems like a long wait, but such a revolutionary product that is enough to ignite the PC industry is finally coming!

Since the release of the first generation of the sharp dragon processor in March 2017, AMD's share has been rising for 10 consecutive quarters, and it is very good and popular in the field of DIY. However, up to now, it has not only occupied about 20% of the overall PC market share, the most critical reason is that the sales volume of the sharp dragon notebook is too large compared with that of its competitors.

But it doesn't matter. All of this will change with the arrival of the sharp dragon 4000 series mobile APU! 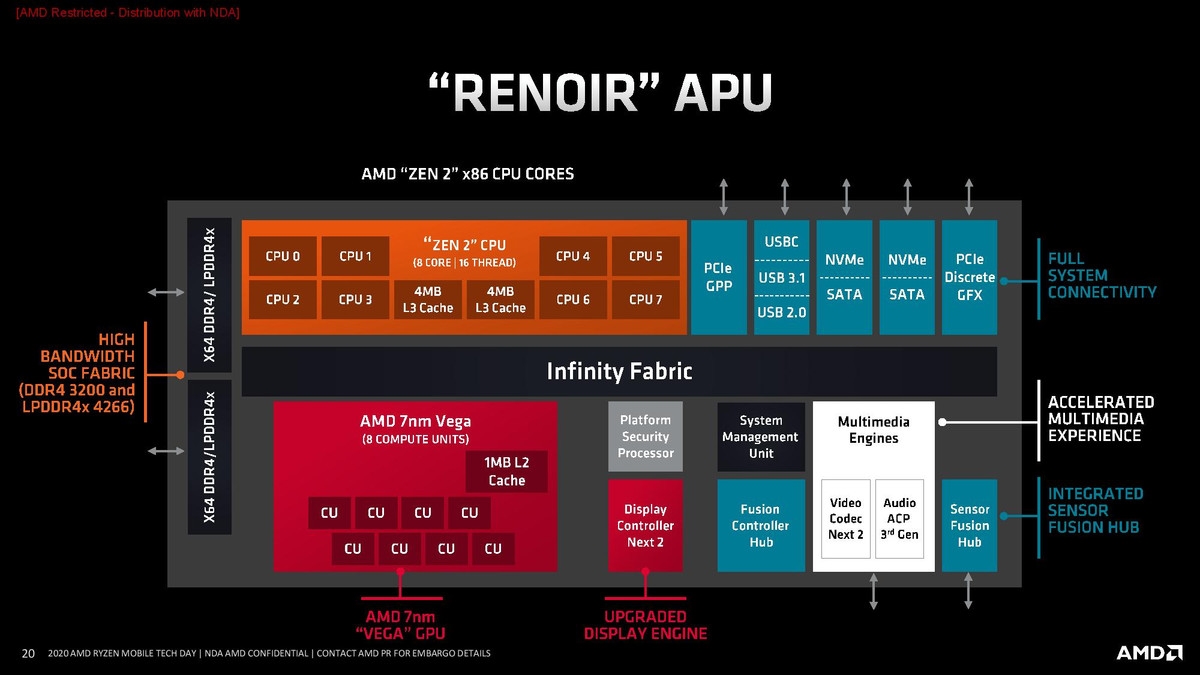 In terms of specifications, Renoir APU can have at most 2 CCX, that is, 8 CPU cores and 8 Cu units (512 stream processors). It's a pity that the PCIe version is still 3.0, with 16 connections in total. 8 connections are displayed separately, and the other 8 are distributed by notebook manufacturers themselves.

In addition, Renoir APU can natively support type-C and USB 3.1. 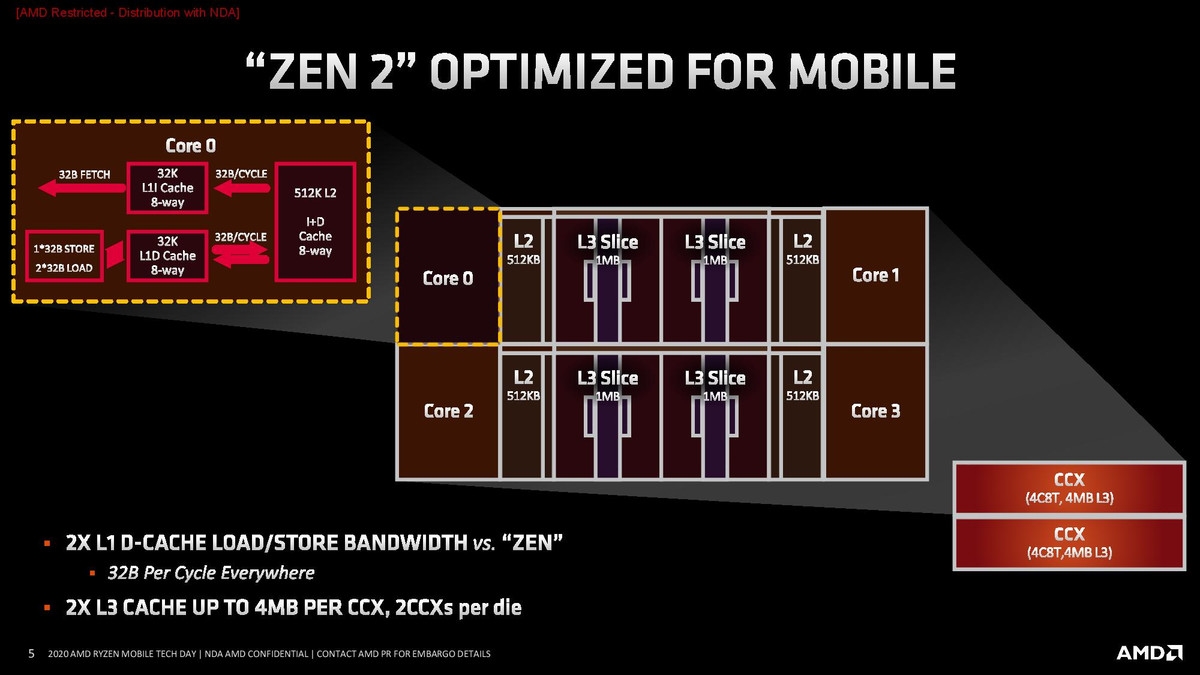 Each CCX of Renoir APU is still 4 cores, 2MB L2 cache, but the level 3 cache is only 4MB, only 1 / 4 of the desktop zen2 processor. Amd should also do this in order to control the core area and reduce power consumption. 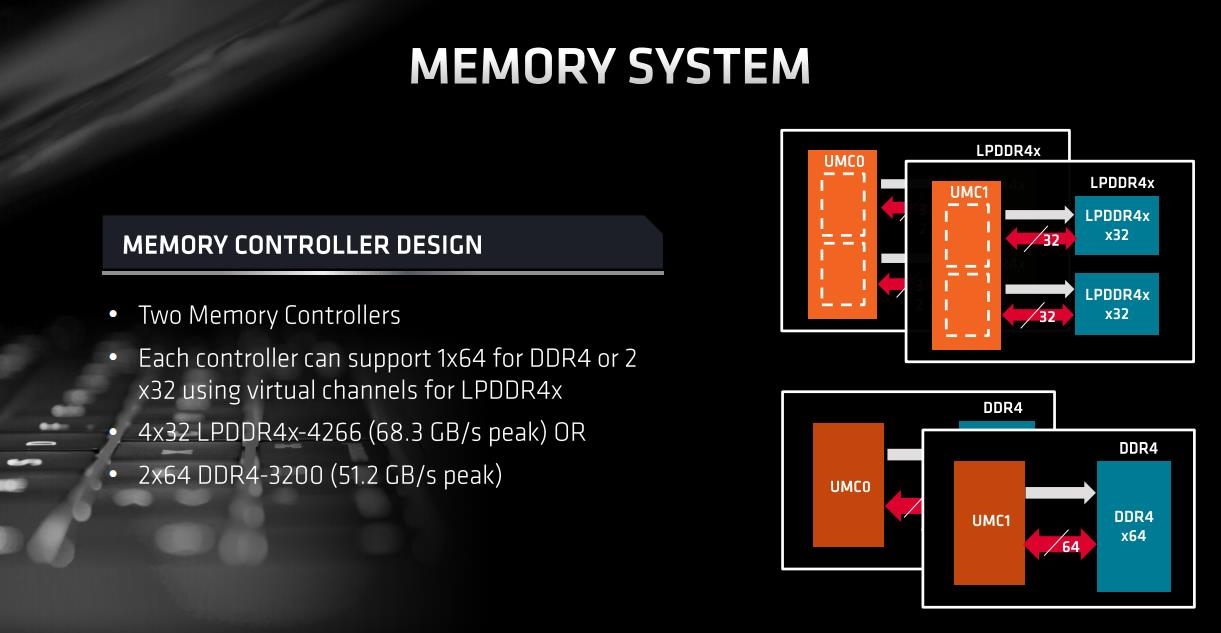 The memory controller supports both lpddr4x and DDR4. The former can reach lpddr4x-4266, while the latter supports ddr4-3200 natively, which is the same as the desktop version. Dual channel lpddr4x-4266 brings up to 68.3gb/s of memory bandwidth, which can provide great help for the performance improvement of Renoir APU game!

At present, there are 6 types of sharp dragon 4000 series standard pressure processors released. The Asustek Tianxuan notebook we received is equipped with sharp dragon 7 4800h processor. Based on TSMC 7Nm process technology, it has 8 cores and 16 threads, basic frequency of 2.9ghz, and acceleration frequency of 4.2ghz at most. As for the highest full core frequency, although amd has not released it, according to our test, it should reach 8 cores and 4.1ghz.

In the GPU part, there are 7 Vega Cu units, a total of 448 stream processors, with a frequency of 1600MHZ. In terms of performance, it can face the 25W version of full blood mx250 independent graphics card.

Related news
Asustek Tianxuan game book starts selling: sharp dragon 8-core / GTX 1660 Ti / 144hz screen price starts from 6999 yuan
The sharp dragon 7 4800h processor meets all wishes! Asustek Tianxuan notebook evaluation
6,000 Yuan True Fragrance Asus Sky Choice Game Photo Appreciation :144 Hz Sharp Dragon 7 2060
7Nm Ruilong 4000 notebook CPU is praised as AMD's best media / self media 0 poor review in 10 years
AMD: a wave of 7Nm sharp dragon is coming
Huawei high performance notebook first exposure: 7Nm 8-core sharp dragon 7 4800h, no unique display
This is a feast for AMD players! Two sharp dragon 7 standard pressure games
Amd sharp dragon 7 with 16GB Tianxuan to launch a new hot configuration
25W sharp dragon 7 4700u blessing! Asustek Lingrui 14: Reebok always has surprises
First launch of AMD Ruilong 9 processor ASUS Tianxuan game
Hot news this week
The developer of the dating app Tinder has reached an agreement with Google over billing rules for its app store
Still did it! Canada has banned Huawei and ZTE from participating in the country's 5G network on "national security" grounds
Red Elf Lightning erupts in the Himalayas Spectacular Spectacle: Experts Reveal What Exactly Is This?
Shipments in the first quarter fell 11%, exposed Xiaomi, OPPO, Vivo cut orders 20%, Apple bucked the trend to increase production
The founder of the Internet Quick Hand Su Hua was taken away for investigation, and the fast hand responded: the news was not true
Wang Xiang, president of Xiaomi, explained that a shortage of low-end chips is a major challenge in overseas markets
Or for Studio Display Pro, the release of Apple's 27-inch Mini LED-backlit Display has been delayed by October
Tencent Q1: The business service business has "slightly decreased" year -on -year, and resource centralized video cloud and network security | View financial report
One picture to understand! Blue Factory has issued 3 new machines in a row: self-developed chip blessing, the narrowest lower border
Sony released the active noise-canceling headphones WH-1000XM5, equipped with 2 chips and 8 microphones
The most popular news this week
Amazon's new CEO participated in a shareholders' meeting for the first time: to restore normal profit, ready to cut off the excess warehouse
Baidu, Shunwei and Fosun are shareholders, and pharmaceutical Internet "unicorn" pharmacists help hand over the watch to the Hong Kong Stock Exchange
Google CEO Pichai: Recession fears intensify The cycle volatility in the tech industry is even more intense
Amazon CEO first appeared at the shareholders' meeting: to restore normal profit
Sony claims that the full recovery of membership upgrade fees is a technical error
Taobao 618 will be launched in the Yuan universe shopping: three -dimensional "shopping Taobao"
Yuncong will be listed on the Science and Technology Innovation Board on May 27 at 15.37 yuan per share
The amount refunded by the game company to the minor recharge should not be "discounted"
Regulatory Shot! Behind the app downtime of many securities institutions: how to break the digital transformation of securities companies
Apple iOS 15 Maps began offering AR walking navigation in Tokyo, Japan