Xunlei Co., Ltd. (NASDAQ: xnet) issued an internal letter saying,On April 2, 2020, Li Jinbo was elected as the new chairman of the board of directors of Xunlei group and will replace Chen Lei as the new CEO of Xunlei group and its subsidiaries, Xunlei, netheart and other related companies.It is understood that the reason for the transfer of senior executives is mainly based on the consideration of the company's future development. 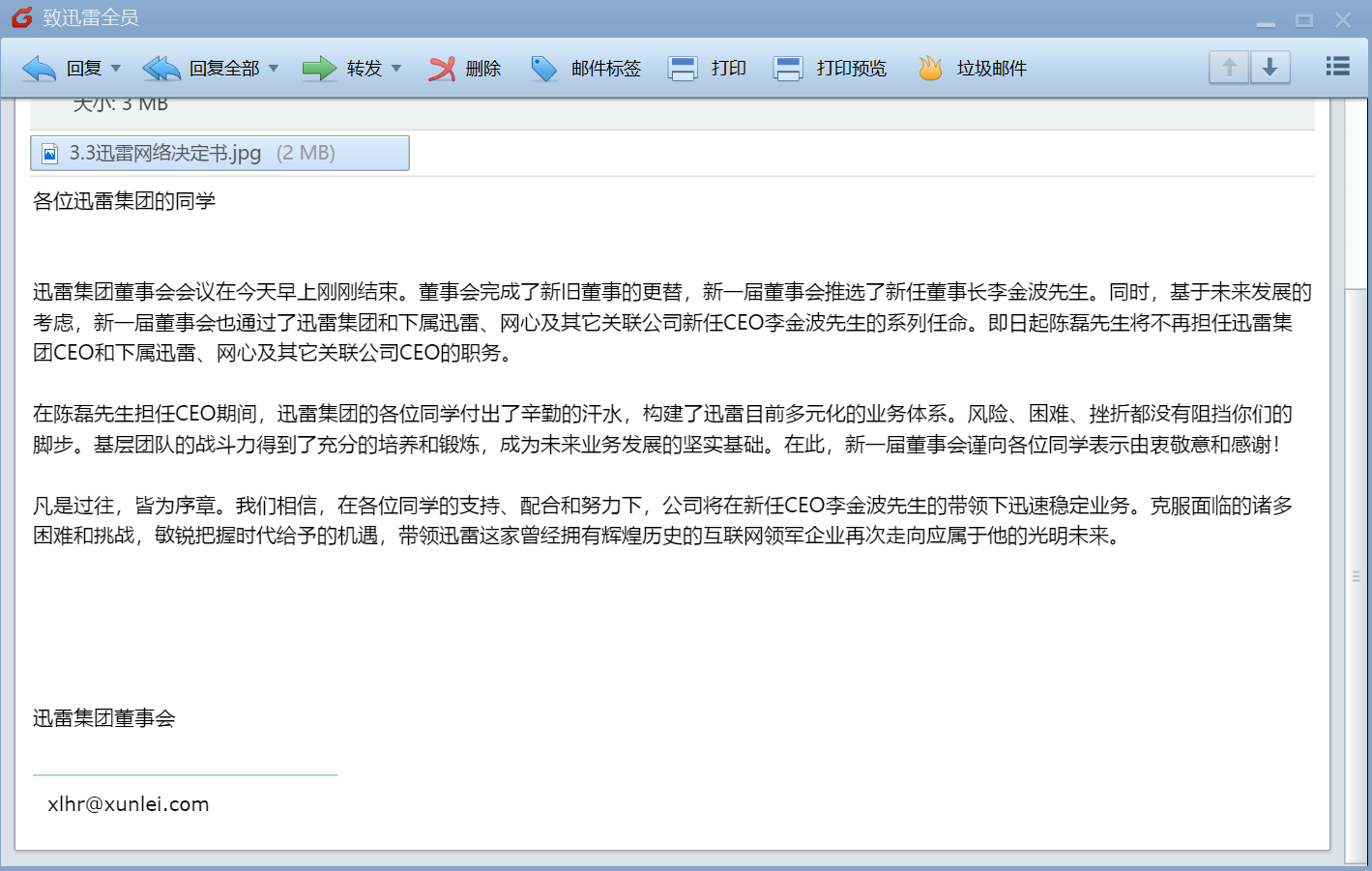 According to the public information, Li Jinbo was a technology partner of Xunlei, the founder of Xunlei engineering technology system, and presided over the research and development of Xunlei 4 and Xunlei 5, the star products of Xunlei's early products, which deeply influenced a generation of Internet users.

"We believe that with the support, cooperation and efforts of all students, the company will rapidly stabilize its business under the leadership of the new CEO, Mr. Li Jinbo," the internal letter said.Overcome many difficulties and challenges, grasp the opportunities offered by the times, and lead Xunlei, the Internet leader with a brilliant history, to a bright future that should belong to him again."

Related news
Will Apple and Intel support the popularity of Thunderbolt?
Gu Geyun's purchase price of cornerstone technology is unknown
Google cloud has acquired cornerstone technology and the price has not been disclosed
Behind Xunlei's change of CEO: Xiaomi Department exits from the board of directors and Li Jinbo school dominates
Chen Lei CEO shares fell 7.9% Thursday before the Shenzhen Public Security Bureau investigation
Former CEO was put on file to investigate "national software" Xunlei lost money for six years
From Zou Shenglong to Li Jinbo, I know the front and back of Xunlei's lawsuit against the former CEO
Hot news this week
Templates for creating new Twitter in the future? Musk's praise of WeChat has triggered a heated discussion on the whole network
Still did it! Canada has banned Huawei and ZTE from participating in the country's 5G network on "national security" grounds
Tencent Music's TME live will re-screen Jay Chou's concert on may 20 and 21
Henan 4 village bank line cannot withdraw cash? CBRC responds! The public security organs have registered an investigation
Sony's new LinkBuds S headset parameter exposure: only 4.8 grams of comprehensive battery life 20 hours
Weak demand in the mobile market! Domestic shipments of mobile phones fell 40.5% in March to a two-year low
Pig companies continue to increase technology, just launched the smart pig farm, another 100 million to set up a technology company
"Chinese version of LV" is re -executed 680 million! Reporting the property clues of the chairman, up to 8.66 million yuan
Baidu: In 2021, an average of 56 billion malicious information of all kinds will be intercepted every year
"Tencent's more than 30-year-old employees account for nearly 60% of them" on the hot search Netizens: Don't mention 35 years old, start to mention 30 years old
The most popular news this week
Huawei's new display is coming: the "MateView SE" will be released tomorrow
Sex scandal fermentation: Musk was accused of destroying Tesla
Like TV! LG unveils 47.5-inch OLED display: 12,999 yuan
Microsoft Win11, Win10 finally to simplify the "environment variable" Settings
Alibaba's proportion of Ali Health Shares increased to 57.06%
Treat 4 billion! In order to strengthen cooperation, 140 billion chip giants intend to increase the holding of Beijing Junzheng stocks
Break through 1G bandwidth! ZTE Router AX3000 Skytop Version launched on sale 259 yuan
AMD Zen4 accelerates up to 5.4GHz! All cores are 5.0GHz
Xiaomi Bracelet 7 New Breaking News: Blood Oxygen Monitoring Big Upgrade Sports Enthusiasts Must-Have
In 2025 we have to achieve 70%chip self -sufficiency rate! Foreign media: You can't, 21.2% in 2026