In the special period of the epidemic, a new round of operations has recently begun.

On April 9, the U.S. Federal Ministry of Justice announced that China Telecom's U.S. business authorization in the United States would pose a national security and law enforcement risk to the United States, the Global Times reported.

The combination boxing happened on the ground has been implicated by many enterprises, and now even the bottom of the sea is not going to let it go.

According to the Wall Street Journal on April 9, America's government has allowed Google companies to launch Pacific high-speed Internet cables connecting Los Angeles to Taiwan, but to

The U.S. Department of Justice announced the decision on April 8, according to Reuters:

Fang Xingdong, founder of the internet lab, said that the US chose Taiwan as the connection point mainly because it believed that Taiwan was under the control of the US, while connecting Hong Kong would be concerned about the participation of Chinese funded enterprises.

Such an idea can be said to be very childish, and such an act really makes people feel speechless. This is clearly to contain and then give up the market confusion.

This optical cable is also manufactured by Chinese Enterprises

The Pacific undersea cable project is supported by Google, Facebook and Dr. Peng Telecom media group of ChinaThe project originally planned to lay 12900 kilometers of undersea optical cable between Hong Kong, China and Los Angeles, the United States, with a construction cost of at least $300 million.

The project promises to provide investors on both sides of the Pacific with faster Internet connections, which would have been a good thing for the people.

As one of the builders, Dr. Peng Telecom media group is an authentic Chinese enterprise. It was founded in January 1985 and listed on the Shanghai Stock Exchange as early as January 3, 1994.

At present, Dr. Peng has 23000 employees in the world, covering more than 210 cities in China and North America, providing services to 13 million family users and 500000 government and enterprise customers. 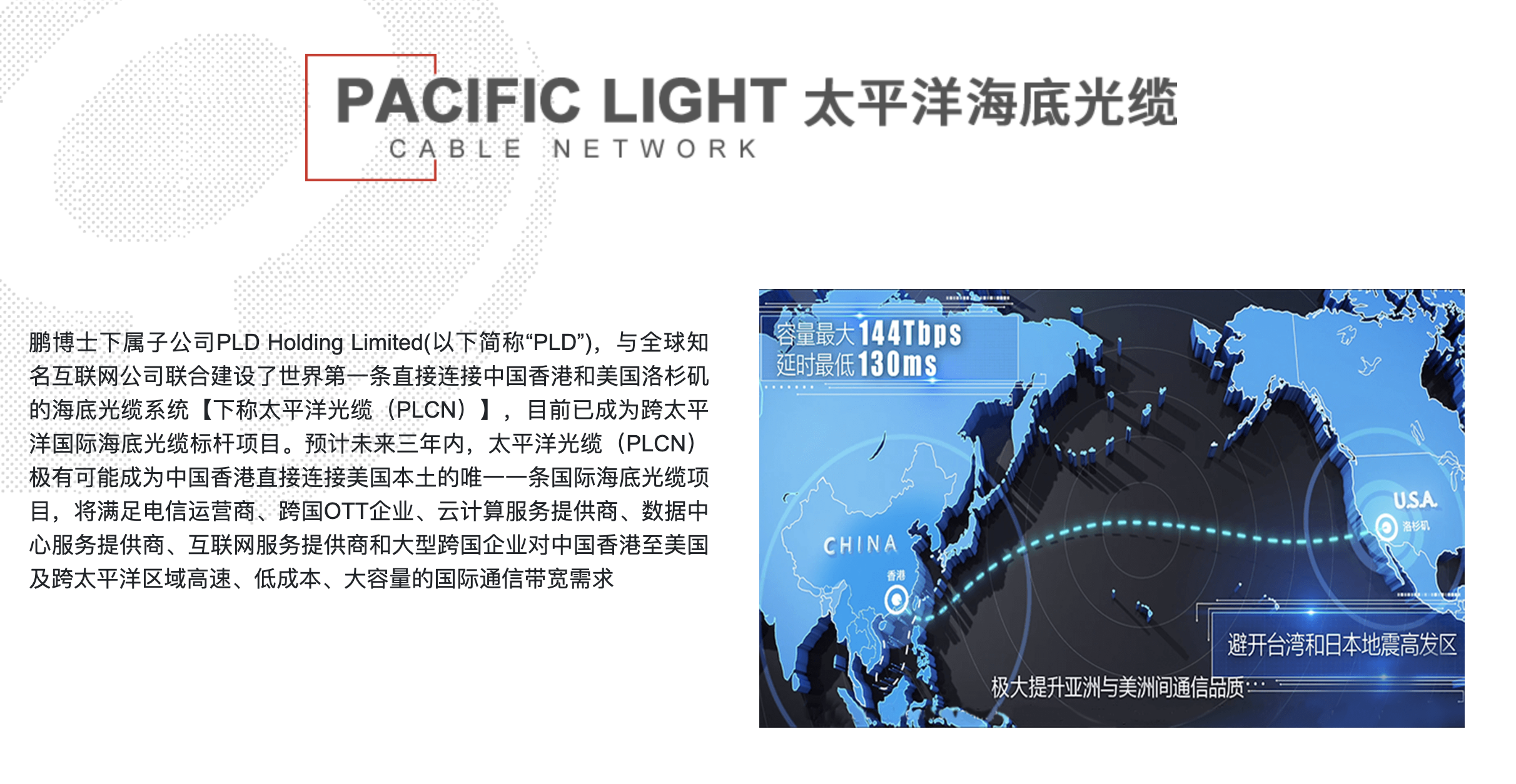 The novel coronavirus pneumonia epidemic is still spreading all over the world, and more and more enterprises choose to work at home. Companies with offices in California, such as Facebook, Google, twitter and Microsoft, have instructed employees to work from home, according to a previous report on the US business insider website.

With the increase of home office, it is bound to require the major remote office application providers to overcome the problems brought by the explosive growth of users in the short term.

This also means that nowadays, there is an urgent need for undersea cable to improve the communication efficiency of the Internet, and the coming 5g era needs more high-speed Internet.

This optical cable project is of great significance

The project would have been the only international submarine optical cable project in Hong Kong, China that directly connects with the United States.

The original goal of the cable is to connect the United States with Taiwan, Hong Kong and the Philippines, so that technology giants such as Google and Facebook can transfer a large amount of information from the data center in the United States to the fast-growing Asia Pacific region.

This is a very good development opportunity for enterprises, which can bring many jobs and create more high-tech labor value.

Now the U.S. refuses to connect the cable with Hong Kong, China, which has a very negative impact on improving network efficiency. It will implicate many enterprises serving the cable and cause unnecessary economic losses.

Undersea fiber optic cables carry most of the data traffic

As an important means of modern international communication, submarine optical cable is the main carrier of global information communication. As the backbone of the Internet, about 300 submarine cables carry 99% of the global data flow.

Submarine optical cable is used to set up telecommunication transmission between countries. Because the submarine cable is laid on the sea floor with insulated wire bundle wrapped in the skin, the sea water can prevent the interference of the external optical and magnetic waves, so the signal noise ratio of the submarine cable is high.

The Wall Street Journal commented on the US government's refusal to connect the Pacific high-speed Internet cable with Hong Kong, China,

The U.S. government's approval for the cable is conditional on Google's commitment to diversify its Internet sites in Asia, including but not limited to Indonesia, the Philippines, Thailand and Vietnam.

Google and Facebook have jointly built the trans Pacific undersea cable from California to Hong Kong in 2016 to continue the long-term development strategy of Silicon Valley giant, which will better control the network pipeline connecting Google data center.

Although the U.S. authorities refused to authorize Google and Facebook to use the cable, the two companies and their Chinese investment partners are continuing to build the cable, and have basically completed the construction of the submarine line and the land anchor station.

In January this year, Google readjusted its deployment and asked the relevant departments of the US government to initially allow the use of optical cables that do not involve Hong Kong, China, while the US Department of justice supported Google's application.

The United States has repeatedly curbed the development of China's communications

Reuters said the role of the U.S. in handling Internet traffic and

What are you worried about? It's just that the United States wants to further curb the development of China Communications and Chinese communications enterprises.

The United States has repeatedly

In 2016, the US said ZTE was fined $892 million for violating US export controls over Iran;

In May 2019, Huawei was listed on the entity control list in the United States;

In May 2019, FCC rejected China Mobile's application to enter the US market;

This will be the United States to block the development of China's communications to the fullest extent.

On April 9, Zhang Chi, the science popularization author of the optical cable fair, said that the possibility of stealing information through the submarine optical cable itself is very small, which is almost impossible in terms of specific operation, but the operator who transforms the signal transmitted in the optical cable into information is the most likely source of leakage.

The flow of cross-border data has become the most important indicator of globalization, while the US containment of China has done great harm to itself.

The global economic system has undergone historic changes. The main body of the global market is enterprises, and the products traded are not finished products. The connotation of market relations is not as simple as buying and selling, but a complex network connected by supply chain.

The global supply chain network has formed a community of interdependence between countries and enterprises. Nowadays, the driving force of scientific and technological progress is not only from innovation, but also from market application.

For example, high-tech enterprises such as Huawei integrate the global innovation, design, manufacturing, marketing and other elements, forming a global science and technology development chain. This powerful chain does not belong to one country, but to the world.

Today, with a cost of hundreds of millions of dollars, the optical cable connecting Taiwan and Hong Kong has already been built, but it has not been put into use.

The Global Times said the U.S. has been emphasizing

On October 24, 2013, the Guardian reported that the US National Security Agency monitored leaders of 35 countries and regions.

Among them, the U.S. national security agency may have monitored the phone calls of German Chancellor Angela Merkel for more than 10 years, who was previously considered the closest partner of former U.S. President Barack Obama in Europe.

Now the Trump administration has passed

Related news
Google is getting farther away from China.
Us: Google Pacific undersea cable can't connect Hong Kong, China!
Hot news this week
With the NIL technology, Canon wants to provide China with a lithography machine comparable to the EUV
The Long March 9 is basically confirmed: the low-orbit carrying capacity of 150 tons can carry the entire space station into space
A small plane in the US has crashed into a 30-metre high voltage power line and got stuck: 80,000 people affected
Alibaba launched a new cross-border e-commerce platform in Spain, aiming to operate independently in the middle and high-end market
Can recording others' wechat chat records be used as evidence? The Beijing Internet Court has an answer
Google is concerned that Microsoft's acquisition of Activision Blizzard will affect the ChromeOS experience
When pure water is used in China team to solve the problem of seawater hydrogen production: it is expected to become an original industry
It's not just Huawei! Beidou has penetrated more than 20 industries and applied more than 15.5 million products
The second generation Snapdragon 8 flagship! Mi 13 toughened film appeared: four sides and other narrow screen accounted for a stable ratio
A Tesla crashed into two cars in Taizhou, Zhejiang province, killing two and injuring one, police said
The most popular news this week
What a fan! Netizens spend ten thousand yuan to get three mobile phones at once: beautiful
A bachelor's degree is needed for a New York City rat control manager who earns 1.2 million yuan a year
4090/80 Take that! Third party pre-orders for AMD RX7900: The most expensive over 11,000
Mi 13 series press conference preview: It is likely to start 3999
Wu Jing endorsed the new model, which goes on sale next week: the 512GB version is almost half the price of the iP14 Pro Max
Why did Chinese fans come to Qatar
Sega Technology: intends to increase the total capital of US $1 million in US Electric with related parties
Analyst: Apple's iPhone 15 portfolio will be more 'balanced' with all Smart Island features
Apple countersued AliveCor, which pioneered the ECG patents
Mi fans lucky draw a Mi 13: exclaiming "outrageous" is equal to earning 4,000 for nothing