On the afternoon of April 14, The joint defense control mechanism of the State Council held a press conference, and Wu Yuanbin, director of the Department of Social Development Science and Technology of the Ministry of Science and Technology, and Wang Junzhi, academician of the Chinese Academy of Engineering, interpreted the issue of vaccines of public concern. 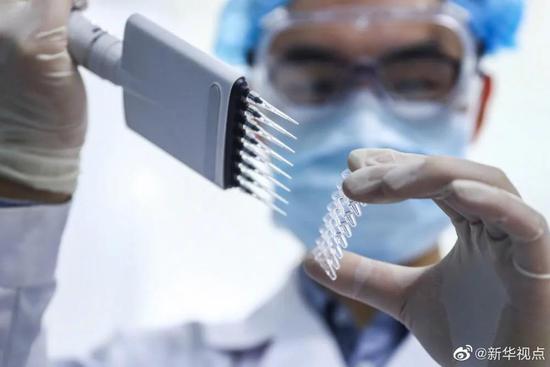 On April 12, the State Food and Drug Administration approved the new coronavirus inactivated vaccine jointly applied by Wuhan Institute of biological products of China and Wuhan Institute of viruses of Chinese Academy of Sciences to enter the clinical experiment. On April 13, it also approved the clinical experiment of the inactivated vaccine developed by Beijing Science and technology Xingzhong life Support Technology Co., Ltd. for two consecutive days.

Academician Wang Junzhi of the Chinese Academy of Engineering:

The two newly approved vaccines are actually a technical route and belong to the new coronavirus inactivated vaccine.

At the beginning of the epidemic situation, the earliest isolated virus strain in China, at that time, the live virus had to be cultured on a large scale, through the joint defense and control mechanism, coordinated R & D units to use the relatively high level of biosafety protection P3 laboratory established in China, can cultivate a large number of live viruses, so that our R & D has the basic conditions.

Vaccine is a big step forward in application

Vaccine itself from the completion of preclinical research to clinical, this is a very significant progress, from the future application of a big step.

Generally, clinical trials are divided into three phases. The objectives and significance of the three phases are different. According to different R & D programs, the time required is different.

The first phase of clinical trial focuses on the safety of observation and use. It is mainly through a small number of susceptible healthy volunteers as subjects to determine the tolerance of human body to different doses of vaccine and understand its preliminary safety. Generally, the number of people is relatively small, which is about ten or one hundred.

The second phase clinical trial will further expand the sample size and target population, in order to further confirm the effectiveness and safety of the vaccine in the population, and determine the immune procedures and doses, which must be done in the second phase clinical trial. In general, there are hundreds or more subjects. It should be noted that phase I and phase II clinical trials are all aimed at healthy volunteers, which are relatively easy to recruit. According to different immunization procedures and different programs, it will take several months.

Generally, the scientific basis for the approval of the vaccine to market can be obtained only after the end of the third phase of clinical practice. Even in case of emergency, our evaluation criteria for the safety and effectiveness of the vaccine cannot be reduced. At present, the society pays great attention to vaccines, and we also look forward to seeing breakthrough and important progress in vaccine research and development in China as soon as possible, so that safe and effective vaccines can be put on the market as soon as possible.

Vaccine itself is a special medicine for healthy people, safety is the first, so in the process of emergency examination and approval, always adhere to respect for science, follow the law, take safety and effectiveness as the fundamental policy, adhere to special affairs special.

It is a rumour abroad that "punch-in" can reduce the likelihood of new crown pneumonia. BCG vaccine is actually the vaccine of planned immunization for children, which is widely used in our country, and we do not see the exact research data to support this statement at present, so it is not known yet.

Related news
After Chen Wei's team, another new crown vaccine in China will enter clinical trials
Semicon China: Huawei and Exxon bring semiconductor intelligent quality inspection and measurement solutions
Def con China restarts Baidu security to hold the world's first all VR geek conference with def con
Glory high-tech products help team China's national team set out to show China's business card to the world
Popular Hot Pot Restaurant Brand Haidilao to Shut Down 300 Restaurants in China
China's New Energy Vehicle Sales in June Expected to Set New High over Fiscal Stimulus
China to Crack Down on Illegal Fundraising Targetting the Elderly
Telecom Operators Essential for the Metaverse:China Mobile Chairman
Hot news this week
"GTA6" was stolen by a hacker without being released. How can the game company defend the source code?
The new rules of Internet popover will be implemented on September 30, and the chaos of "bully screen advertising" is expected to be eradicated
Google is shutting down its Stadia cloud gaming project, with the developers involved saying they had no knowledge of the plans
Brother sent a mobile phone to pay 200 yuan to pay the owner to the police: money is not scraped by the wind
Mate 50 Kunlun version is in short supply! Huawei additional production capacity: October supply can improve
IPhone6 officially "retired", its series sold 250 million units, second-hand purchase price is now as low as 100 yuan......
After a lapse of 28 years, the Chinese women's basketball team won the World Cup runner -up Li Meng's T -shirt on fire
Woman addicted to 'A Sheep' husband worried about being cheated to report for help: official confession
Apple responds to the iPhone accident monitoring cannot be triggered 100%: no minimum requirements are met
Meituan Wang Xing: Chinese auto companies will definitely win, "NIO, Huawei, ideal" will replace BBA to occupy the high-end market
The most popular news this week
Girls walk to play mobile phone hit telephone pole forehead bulge: hope friends learn a lesson
The Snapdragon 8 Gen2 flagship of the Year is here! The standard battery may not even be 4000mAh
Boot up is the new high-end flagship of Android 13 first look: performance is crushed by iP14
Are you enough? Microsoft announced that all compatible users can upgrade win11 2022
American Infrastructure Revival 8000M Fiber Broadband: The same speed, unlimited upward speed, unlimited
Brazil approves Activision-Blizzard deal
Apple doubles U.S. manufacturing: mostly small-scale test production, only Mac Pro assembled in the U.S.
EPIC CEO Angry Apple App Store price increase: Apple is like a landlord, developers have nowhere to go
Xiaomi Group: $ 117,000 repurchase 4,800 shares shares shares
Sub -iPhone 14! Huawei New Machine Release: Snapdragon U Blessing