Radceway's research in China was suspended, but good news came from abroad

According to information ClinicalTrials.gov the clinical trial registration website, the study was updated on April 15 and appears as

The earlier clinical trials in china of patients with severe COVID-19 have also been discontinued —— which is not good news for mr. redceiver.

Outside china, however, the situation is quite different and there is hope.

Rhett seway in China: has the people's hope failed?

Reed Redmdsivir is the novel coronavirus trial drug developed by the world's first antiviral research company and one of the largest Biotech Corp in the United States, Gilead Sciences (Inc.), which inhibits RNA synthetase (RdRp) - and RdRp exists in the new coronavirus.

A novel coronavirus pneumonia case was successfully diagnosed in the US in January 31, 2020 by the new England Journal of Medicine (NEJM) in a short report column. The novel coronavirus infected patients deteriorated after isolation treatment and the effect was immediate after the use of Reed's Wei, according to the article. 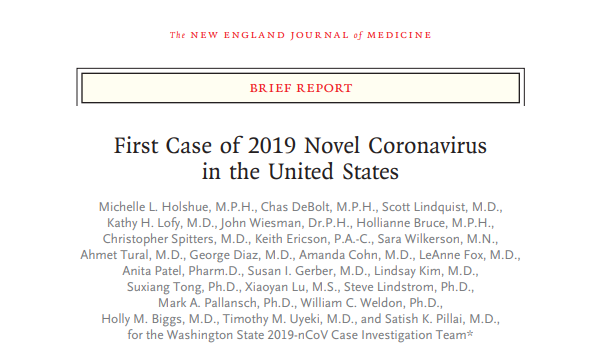 After the report reached China, it also gave hope to the people who were suffering from the epidemic, so Rhett Sivir was called

On February 2, the drug evaluation center of the State Food and Drug Administration officially accepted the application for clinical trial of ridcivir.

In February 5th, the novel coronavirus infection research project of Reed West Wei, launched by the Ministry of science and technology, was launched in the golden Yin Tan Hospital of Wuhan. The project includes two clinical studies: 2019.

A total of 761 patients were enrolled in the two studies, of which 308 were mild and moderate, and 453 were severe. At that time, Professor Cao Bin of the Sino-Japanese Friendship Hospital introduced that the study would carry out a rigorous randomized double-blind trial to determine the efficacy and safety of Rhettcivir in new coronary pneumonia.

At the same time, Gilead has also reached an agreement with the Chinese health authorities to support the two clinical trials - providing the drugs needed for the study free of charge, and providing support for the design and implementation of the study. At the time, however, Gilead predicted that it would obtain preliminary data from the readcivir study of severe patients by the end of April.

During the next two months, rhettsiwei entered a clinical trial conducted by wang chen and cao bin team of china-japan friendly hospital in wuhan jinyintan hospital —— but no news has been released because of the long clinical trial cycle.

So far, no data of clinical trials have been published.

However, on April 11, Gilead announced that according to the information it obtained, the clinical research of readcivir's severe group in China had to be stopped due to the stagnation of enrollment. After this news, Professor Cao Bin, who presided over the trial, said in an interview with first finance and economics that he was analyzing the data of readcivir's severe group. 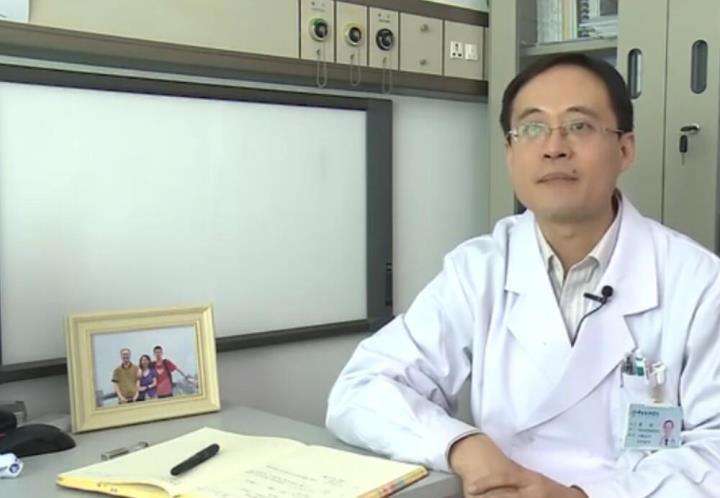 And on april 15th, the information ClinicalTrials.gov the clinical trial registration website, two clinical trials conducted by rhett sevir in china, including two for severe patients and two for light, ordinary patients, were updated to the latest status

And the tests stopped early, researchers said, because of China

In response to this outcome, there is a comment that: has the hope of the people failed?

Outside of China, there are still variables in radceway's situation

The situation in the United States is quite different from that in China.

In late February, the epidemic was gradually under control in China, but it spread in other countries and regions. Novel coronavirus pneumonia cases were diagnosed in the world for the first time in February 26th, the first time in China. The CDC in the United States also held a conference in late February, announcing the latest confirmed suspected case of community-based transmission in the United States.

In this context, the clinical trials of radcivir abroad began to be carried out on a large scale.

A clinical trial, funded by the National Institute of Allergy and Infectious Diseases (NIAID), was registered at the University of Nebraska Medical Center on 21 February to conduct a Rhettsivii phase II clinical trial in 50 locations around the world to recruit 394, expected to be completed by 1 April 2023.

Novel coronavirus announced in February 26th that the two phase three clinical study was launched to assess the safety and efficacy of Reed's treatment in adults with new coronavirus pneumonia. 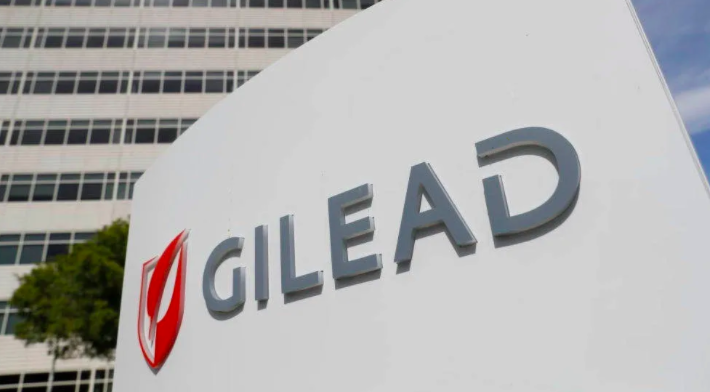 Different from the two randomized double-blind control group trials conducted in China, the two clinical trials conducted by Gilead will be carried out mainly in medical centers in Asia and other countries with more confirmed cases in the world by adopting the randomized, open and multicenter research method. The study will evaluate the two medication time schemes of intravenous administration of Reed civivir - the expected results will be in 5 Published in January.

Gillied's primary focus is to quickly determine the safety and efficacy of Rhettsivir as a potential treatment for novel coronavirus pneumonia. these complementary studies help us to obtain broader global data on this drug in a short time.

On April 10, the New England Journal of Medicine (NEJM) published the results of a retrospective analysis of redcivir sympathies online. Among the 53 novel coronavirus pneumonia patients who were included in the analysis, 68% (36/53) from the United States, Japan, Canada and Europe were improved in the oxygen support type and 7 patients (13%) died.

In response, cap China quoted Cao Bin and other experts as saying that the above results do not constitute an effective proof of the efficacy of radcivir. Professor LAN Ke, director of the National Key Laboratory of Virology, Wuhan University, said he was cautious and optimistic about the effect of radcivir in the treatment of new crown. He looked forward to the release of a number of double-blind, randomized controlled clinical trials in the near future.

It is worth mentioning that the study itself also indicates in the conclusion that the efficacy judgment is to be determined by the results of the randomized, placebo-controlled trial of ridcivir currently being carried out. 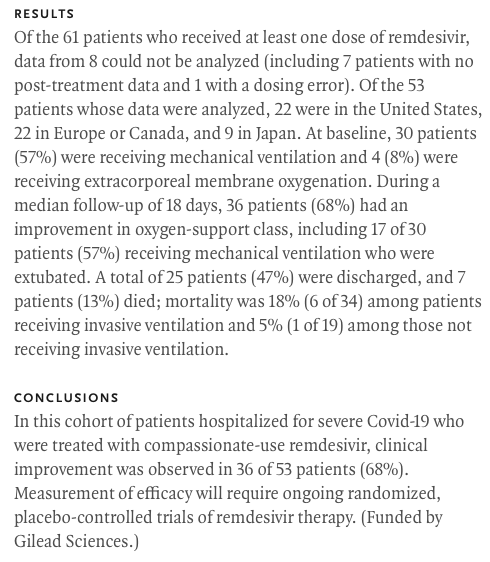 The latest news about the efficacy of ridcivir is from stat, the US medical news website. Novel coronavirus pneumonia in 125 clinical trials was reported to be a rapid improvement in have a fever and respiratory symptoms, and was discharged in less than a week. Only two people died, the report quoted a medical researcher from University of Chicago.

In response to this news, Gilead China also made an official response on April 17:

The anecdotal report is encouraging, but it is not statistically sufficient to determine the safety and efficacy of Rhett sevir as a new the treatment of coronavirus pneumonia. Any conclusion of the test will require analysis of the entire data. We look forward to receiving data from a number of studies over the next month to help determine the safety and efficacy of redcevir in the treatment of patients with new coronavirus pneumonia.

Novel coronavirus pneumonia is not a safe idea in Reed's way of treating pneumonia.

It should be noted that the suspension of two studies in China is not an isolated case.

In response, Zhong Nanshan, head of the high-level expert group of the National Health Commission and director of the national respiratory disease clinical medicine research center, said in an exclusive interview with China Science Daily:

Many studies have been withdrawn because no one would have expected China to control the epidemic so quickly. Now we have no chance to conduct large-scale clinical drug or treatment research in China. The first wave of epidemic has passed, and the second wave is under relatively good control, especially in a very strict framework of group prevention and control. 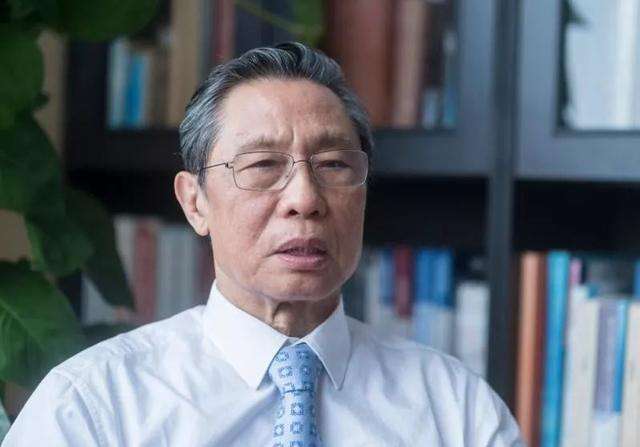 It can be seen that the suspension of clinical research in China is indeed related to the current control of the epidemic situation in China.

Outside China, however, the epidemic is becoming more and more alarming, which may make it possible

Novel coronavirus pneumonia cases were diagnosed in forenoon at eight o'clock a.m. Beijing time in April 17th. Over 2 million cases were confirmed, and the number of specific cases was 2034802.