Is iPhone se 2 worth getting started with? Horizontal comparison with iPhone 11 series (Figure)

After the second generation of iPhone se was launched recently, there was a heated discussion. It was not only equipped with the flagship A13 bionic processor, but more importantly, it dived 500 yuan as soon as it was launched, becoming the "real fragrance machine" in the first half of 2020. So what's the difference between the iPhone 11 series and the new atlas, the foreign media, brings a horizontal specification parameter comparison. 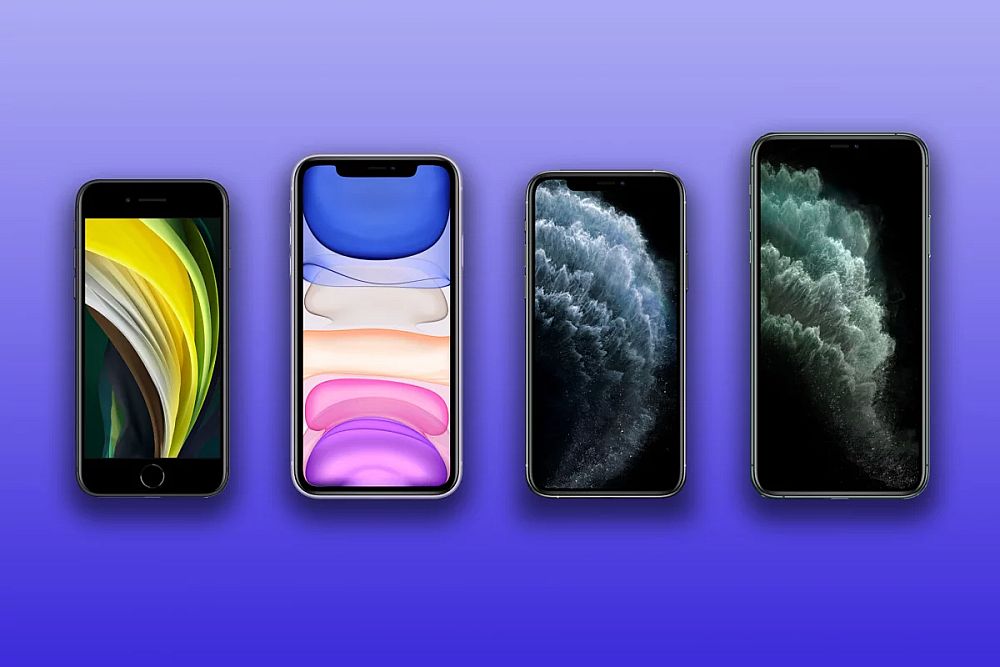 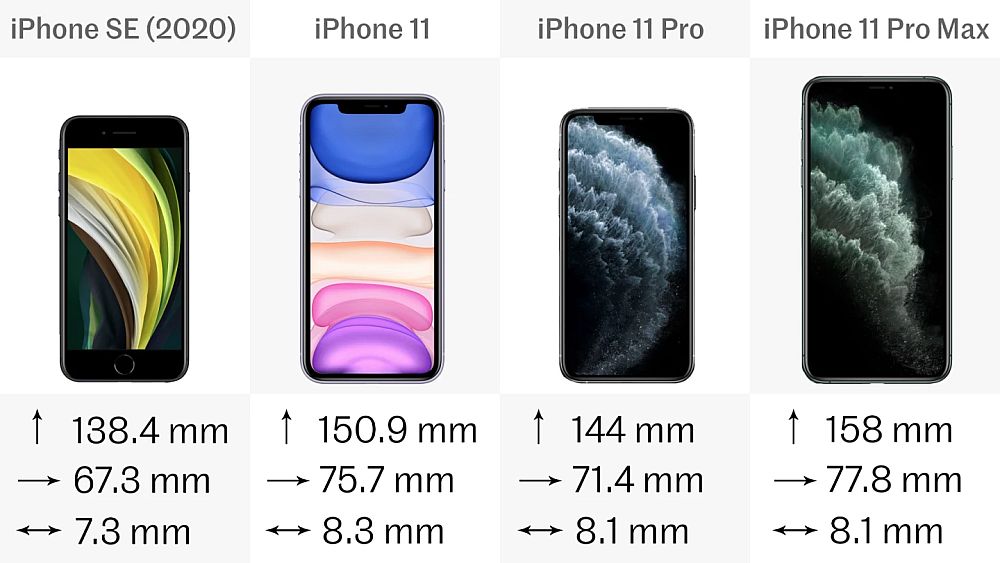 The second generation of the iPhone se is smaller than the iPhone 11 series and is the same size as the iPhone 8. If you're looking for a small screen flagship, it's a great choice. 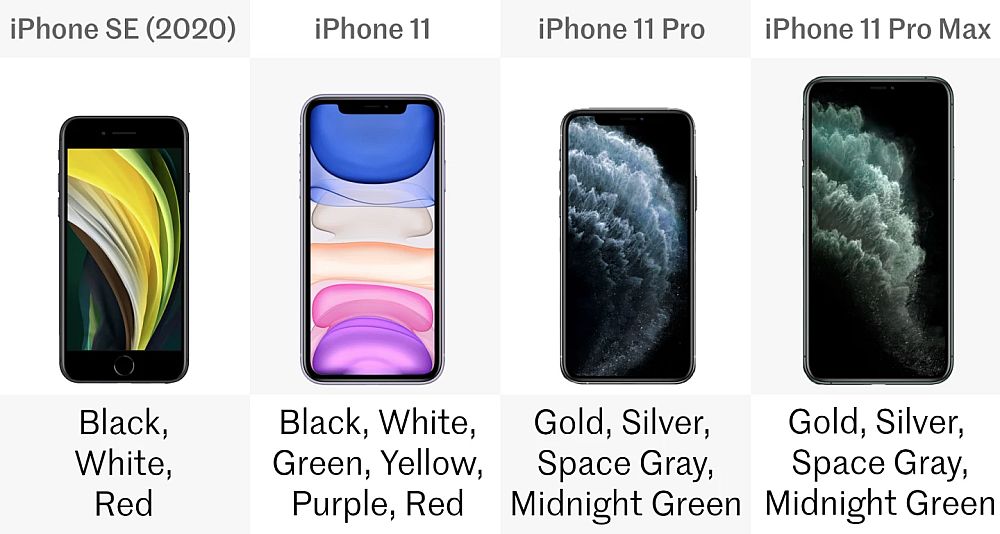 In addition to the traditional black and white options, the limited red version of the iPhone se will donate some of the proceeds to covid-19 virus research.

The iPhone 11 series offers other options, such as green, yellow, and purple. IPhone 11 pro and pro Max have more colors, including gold, silver, space grey and dark green. 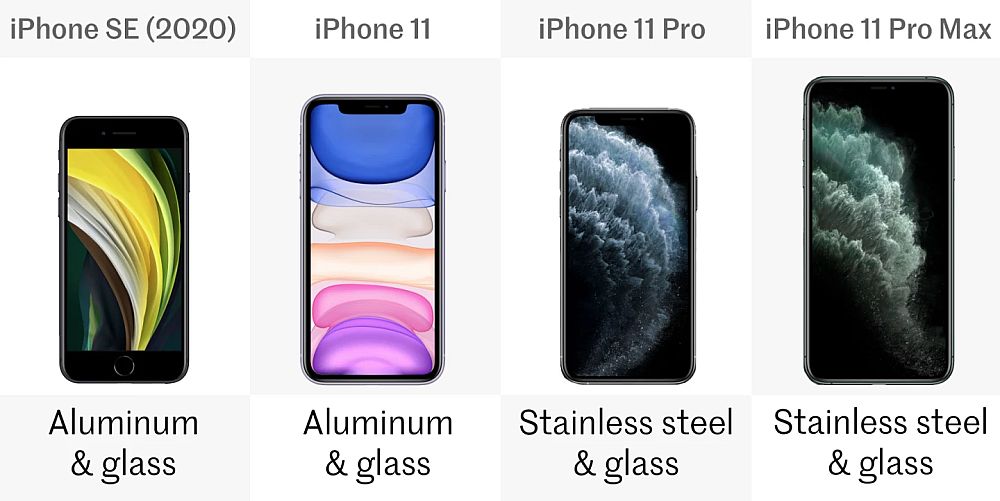 For the screen, the size of the iPhone se screen has decreased significantly. The 4.7-inch screen is about 1 inch smaller than the iPhone 11 pro, and the largest one is the iPhone 11 Pro max.

A few years ago, mobile phone manufacturers began to pursue a larger screen share. But because the iPhone se still uses the look of the iPhone 8, its screen share is the lowest of all four iPhones. This is mainly because of the frame on the forehead and the home button on the chin. 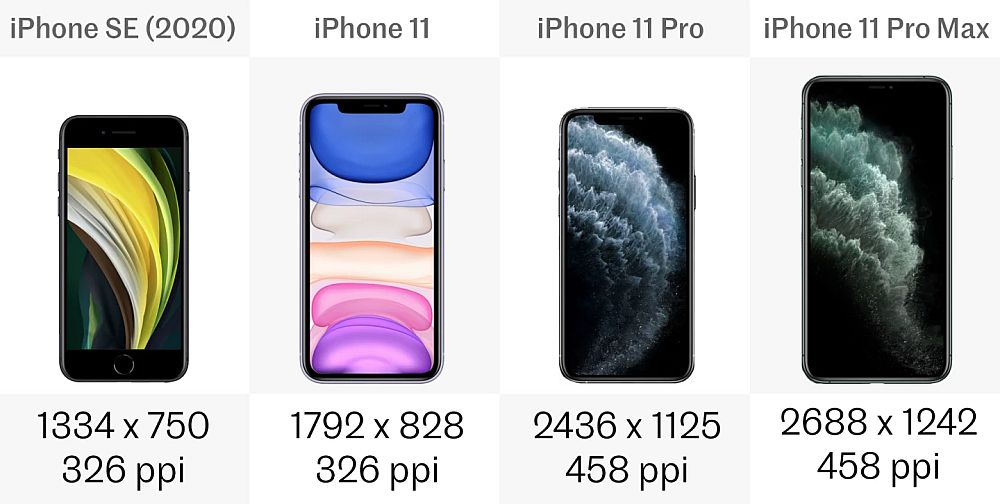 iPhone 11 performed better, but still below full hd. Lastly, the screen display effect of iPhone 11Pro and Pro Max is much more delicate, and the number of vertical pixels in Pro Max is more than twice that of iPhone SE.

If there is no side-by-side comparison, it is difficult to find specific differences. Generally speaking, OLED color is more vivid, black deeper IPS LCD looks clearer and more natural, there is no obvious winner here.

The iPhone se has a 7 megapixel f / 2.2 front camera, which satisfies most self photographers. The other three iPhones have 12 megapixel front facing cameras. 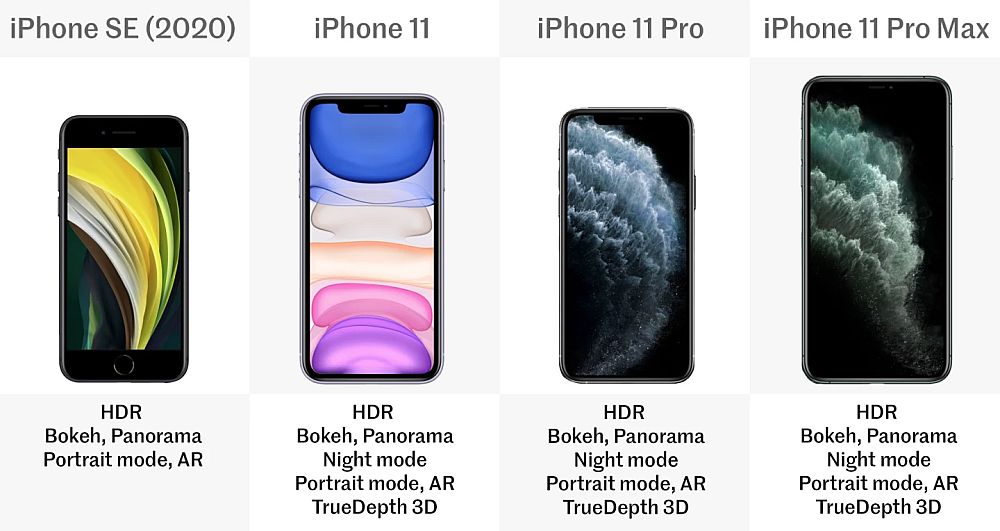 Despite the single camera system, iPhone se users didn't lose much camera functionality. It still has HDR, blurs the background, and a panoramic mode of up to 63 million pixels. The portrait mode has also been optimized by introducing advanced depth of field control and six different light filters.

iPhone SE lacks a TrueDepth 3D camera on the front of the fuselage despite some augmented reality features. iPhone SE lack of the main function is the night view mode. 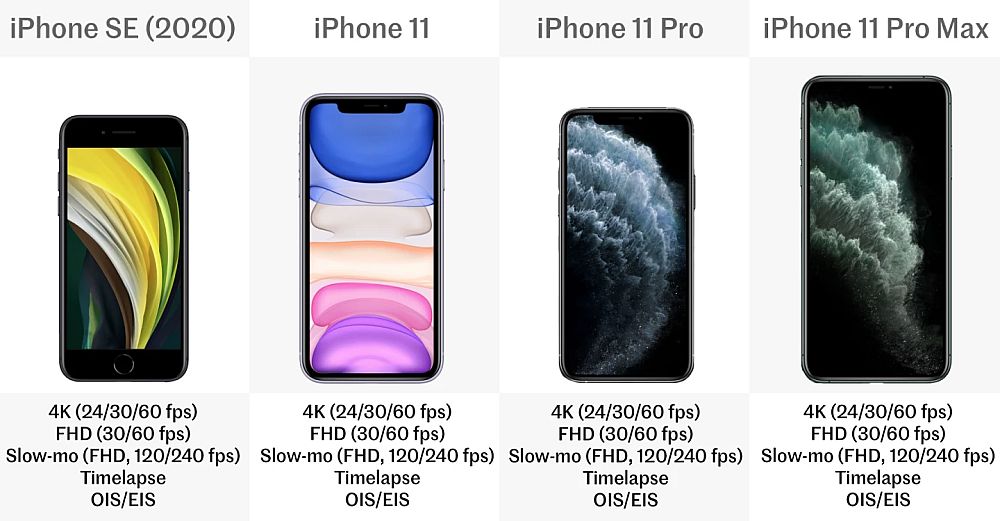 And all of this is maintained by optical and electronic image stabilization.

The biggest change of iPhone se is that it is equipped with Apple's latest A13 bionic processor, which is the same as that of the iPhone 11 series.

Apple officials say the A13 includes the fastest CPU and GPU, and the neural engine improves performance and helps extend endurance.

Apple has never announced the memory capacity of the iPhone. We usually get it from a third party. Earlier reports showed that the iPhone se ran 3 GB of ram, but it is not 100% certain at this time. The iPhone se has the same three storage options as the iPhone 11.

MicroSD card expansion is not supported on all three iPhones.

Third, apple never officially released the exact battery capacity figures. There are rumors that the iPhone se is packaged with a negligible 1821 MAH, which Apple says is equivalent to 13 hours of video playback or 40 hours of audio

All four devices also have wireless charging, but no matter which iPhone you buy, you need to buy a charger separately. At present, the retail price of Apple's official website starts from 3299 yuan, but it drops 500 yuan directly in the e-commerce channel.

Related news
The History of the Development of the iPhone Camera
The History of the Development of the iPhone Camera
How is the new iPhone SE、iPhone 11、iPhone XR different? Which one to buy
Is iPhone se 2 worth getting started with? Horizontal comparison with iPhone 11 series (Figure)
IPhone se 2: just because it's small?
IPhone 12 delay: winter is coming
Hot news this week
Titanium Media Publish Assesum: People's Bank: Digital RMB Winter Olympics pilot has entered the sprint phase; Tesla announced that 250,000 Powerwall energy storage power stations have been installed
Close to the apple millet, two weeks of consecutive weeks, China Smartphone second: 3 years, the world's first
Alibaba and Tencent have received more than half of the 43 antitrust fines, and lawyers say the penalties are likely to increase
Study on the sequelae of COVID-19 in the Chinese team: Shortness of breath, depression and other problems still existed nearly one year after discharge
Capital does not love SAIC, "flying" subsidiary, Jet Hydrogen Technology intends to go to science and technology board
Huawei redefines one of the three major communication networks of the underground communication network
Tencent responded to "APP to get ridiculous": Upgrade APP is now downloaded for user rights protection
Gree announced the implementation of the double-holiday work system Dong Mingzhu from the media voice netizen God reply
The approval of Sensetime's IPO gives the metasurverse concept another ride
Netease Cloud Music will soon be listed on the back of 200 million monthly live users how to make money
The most popular news this week
Huawei Heavy Machinery is re-incorporated! Generators except logo exactly
Samsung PCIe 4.0 hard drive upgrade: more heat sinks fully support PS5
New crown latest variament has emerged in early November: New York, USA has a bad feeling
Black Friday us stores face embarrassing situation! Got stuck in the neck
Vehicle positioning signal weak puzzle! To be completely solved by Huawei
Apple resumed sales of the iPhone and iPad in the country after an emergency removal, with prices rising by 25%
In the first 10 months of the year, China's software business revenue increased 19.2%
Guangming Daily: Bid farewell to disorderly competition, platform economic development to tighten the bottom line
Can WeChat transfer borrowed money?
Sources say Huawei has begun mass production of a generation of foldable phone price surprise