Recently, Tencent Youtu laboratory has made another breakthrough in pedestrian recognition (Reid) technology. Through the introduction of cross scene Reid, its Reid model performance has refreshed the records of three authoritative mainstream Reid public data sets cuhk03, duke-mtmc and market151, and its key indexes, rank 1 accuracy and mean average accuracy, have been achieved Precision) is the best in the industry. 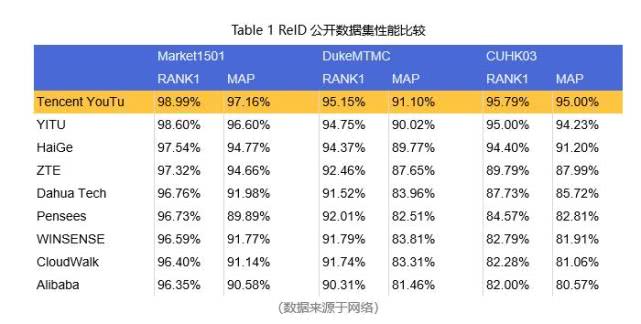 Pedestrian re-identification (Person ReID) refers to the establishment of identity correspondence (i.e., associated pedestrian ID) to pedestrian images captured by different cameras, and a comprehensive depiction of pedestrian implementation of the course of action under the whole scene. In short, in the face can not see the complex multi-scene can also be through the posture of the recognition of people. Compared with face recognition technology, ReID has high robustness to the occlusion, orientation and clarity of human body images, and has no hard requirements for the clarity, erection position and angle of the camera. As a result ReID technology has become a hot topic in computer vision after face recognition.

In view of the technical advantages of Reid technology and its wide application prospects in various fields, in recent years, Tencent Youtu has made a large number of technical investment and comprehensive technical layout in this direction, and has published more than 15 academic papers in related fields in top international academic conferences and journals such as CVPR / tpami / AAAI / IJCAI.

Although Reid technology has evolved for many years, the complex and changeable scenes in reality also make cross domain person re identification a big problem of Reid technology. This time, the cross scene Reid introduced by the three datasets of Tencent's optimal graph refresh is a technical breakthrough in this difficulty.

The difficulty of cross-scene recognition is that different scenes will affect the visual features of human images due to environmental illumination, camera angle, background and other factors, such as indoor shopping malls, side and high angle cameras of small stores, outdoor roads, strong light in the community and night environment. How to adapt the ReID technology to the complex and changeable scene and realize the cross-scene pedestrian image retrieval is a major technical challenge, and also a key technology to realize the indoor and outdoor pedestrian linkage and the whole city linkage. Breaking through this technical difficulty plays a great role in expanding the ReID landing scene and format and realizing large-scale pedestrian identification.

To solve Reid The technical difficulty is that Tencent excellent graph proposes a cross scene pedestrian recognition technology framework through targeted optimization on business problems such as occlusion matching, full angle matching and cross domain retrieval, as well as a large amount of accumulation and innovation in model structure, loss function, training algorithm and other technologies. The model based on graph convolution and twin network is adopted to make the neural network multi-directional And multi pose human body has stronger recognition ability. This technology can learn the unified feature expression for different scenes, different shooting angles and lighting conditions of pedestrian visual features, and effectively improve the precision of Reid technology in pedestrian image retrieval indoor and outdoor, cross scene.

Through the introduction of cross-scene ReID, Tencent Youtu refreshes the best level in the industry in three data sets, in which the RANK1 of Market-1501 data sets reaches 98.99%. RANK1 and MAP, as the core index to measure the technical level of ReID, have a high first hit rate, which means that the algorithm can accurately find the one most easily identified or matched in many images.

On this basis, the Reid algorithm of Tencent optimal graph is also at the leading level in the field of multi scene pedestrian image mutual retrieval, surpassing the existing algorithm in the cross scene Reid dataset msmt-17 to reach the state-of-the-art level.

Tencent Youtu's Reid technology has not only achieved leading performance in relevant data sets, but also achieved commercial level and wide implementation in a variety of scenarios. In the future, with the gradual maturity of cross scene pedestrian recognition ability, Tencent's Reid technology will also realize value in more scenes and formats.

Related news
ZTE's intelligent video ReID algorithm made a major breakthrough, refreshing the world record of the three major data sets
ZTE's intelligent video ReID algorithm made a major breakthrough, refreshing the world record of three major data sets
Microsoft is ready to bring home its hottest feature, Sets, in Windows 10.
Tencent Youtu once again set a record ReID three public data sets, the highest hit rate of nearly 99%
Hot news this week
The developer of the dating app Tinder has reached an agreement with Google over billing rules for its app store
Still did it! Canada has banned Huawei and ZTE from participating in the country's 5G network on "national security" grounds
Red Elf Lightning erupts in the Himalayas Spectacular Spectacle: Experts Reveal What Exactly Is This?
The founder of the Internet Quick Hand Su Hua was taken away for investigation, and the fast hand responded: the news was not true
Wang Xiang, president of Xiaomi, explained that a shortage of low-end chips is a major challenge in overseas markets
Or for Studio Display Pro, the release of Apple's 27-inch Mini LED-backlit Display has been delayed by October
Tencent Q1: The business service business has "slightly decreased" year -on -year, and resource centralized video cloud and network security | View financial report
One picture to understand! Blue Factory has issued 3 new machines in a row: self-developed chip blessing, the narrowest lower border
Sony released the active noise-canceling headphones WH-1000XM5, equipped with 2 chips and 8 microphones
Tencent established a smart technology company in Chengdu, and its business scope includes Internet data services
The most popular news this week
How does the Internet make People Copy each other
Fed Vice Chairman: The future digital dollar may complement the coexistence of stablecoins and commercial bank currencies
ZHANG Pingan, CEO of HUAWEI CLOUD: The value of data governance in China has not been fully tapped Data and AI should be accelerated
Shenzhen Atmosphere! The sales price of mobile phones, computers and other products is subsidized by 15%
Microsoft shows third -party components: Win11 chicken rib function is saved
No need to grab it! Sony announced an increase in PS5 shipments
Audi advertising poster photos only sell for 8 yuan? Photographers question the unreasonable use of the photo purchase
Twitter spent $150 million to settle privacy and security lawsuits with the U.S. government
Hong Kong Hang Seng Index Opens 0.5% Baidu Hong Kong Stocks Open More Than 2%
Amazon's new CEO participated in a shareholders' meeting for the first time: to restore normal profit, ready to cut off the excess warehouse