Xiaopeng automobile responds to Tesla: no cold in the mouth, action in bullying 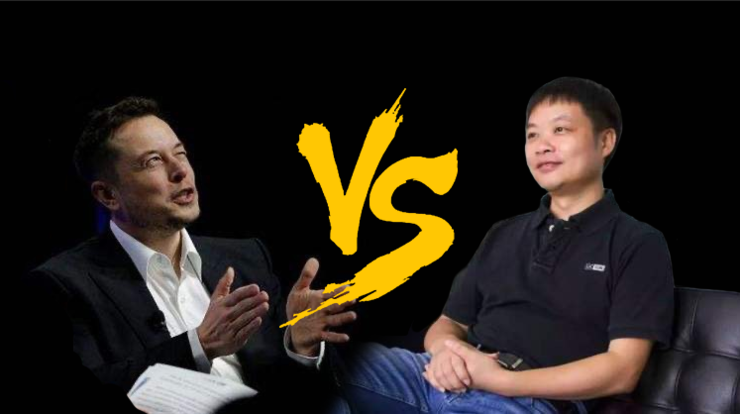 According to Bloomberg, Tesla asked judges to put pressure on Xiaopeng to disclose its self driving source code and submit forensic images of relevant information on the hard disk. Tesla even wanted Dr. Cao to come forward for an interview in person. 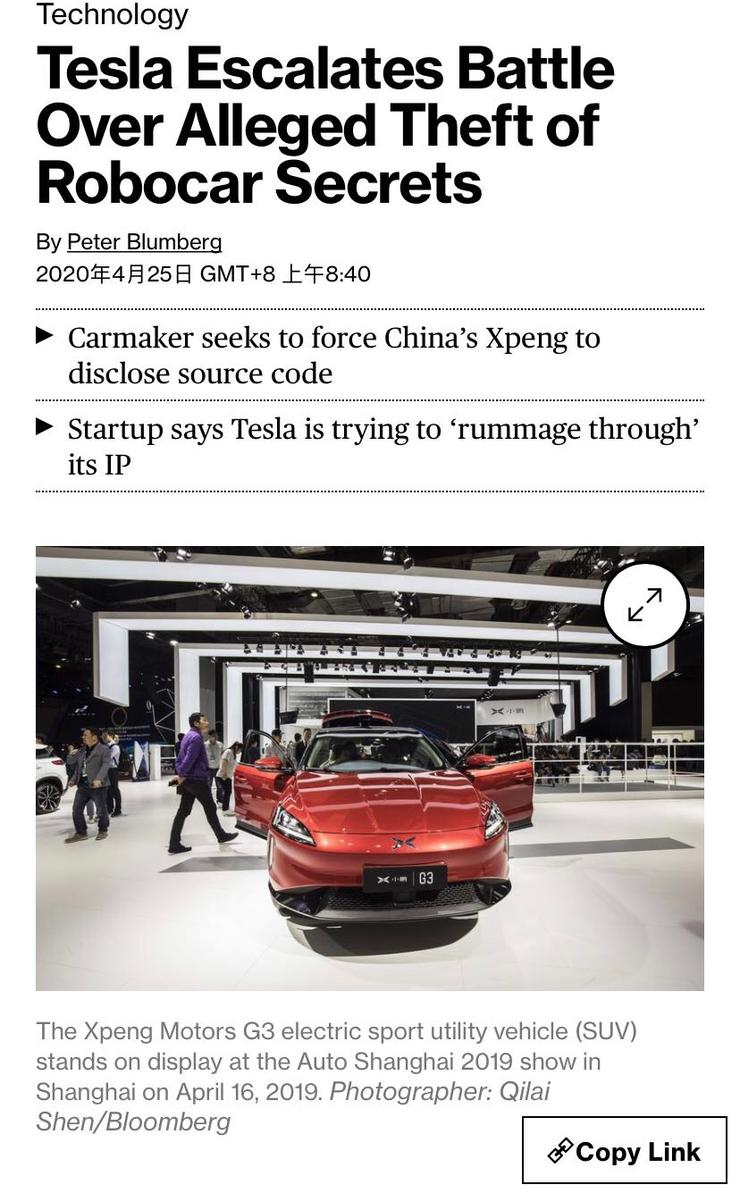 In a formal statement, Xiaopeng said that in the past year, Xiaopeng automobile did not hide anything and has been trying to assist in the investigation of the case.But so far, there is no evidence that Xiaopeng automobile abused Tesla's trade secrets or other improper behaviors. 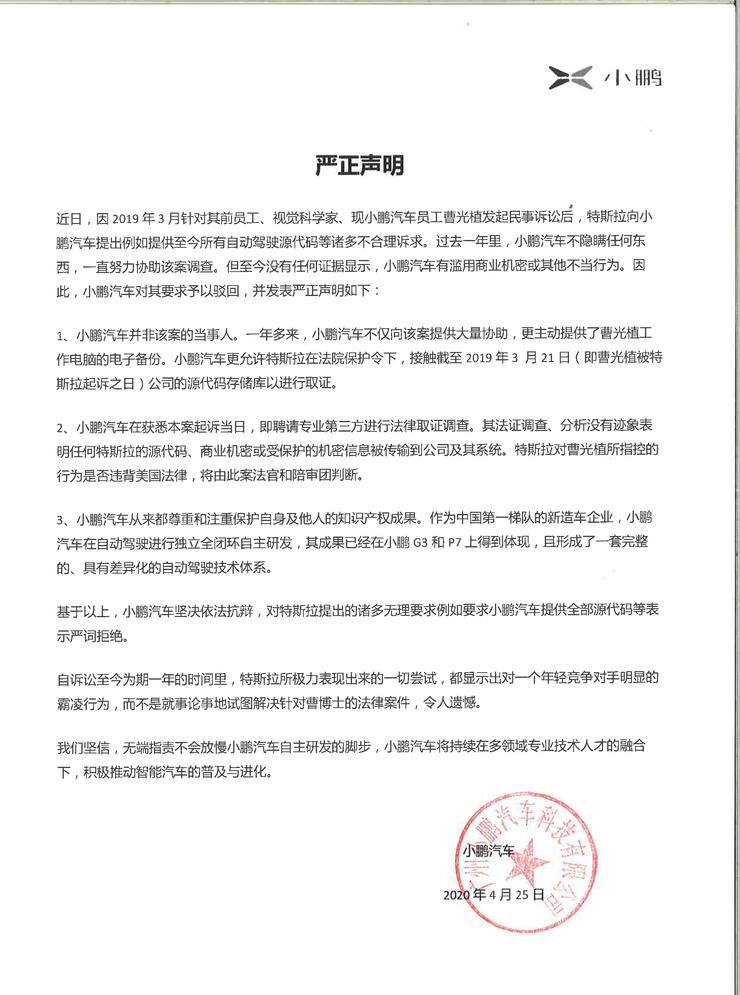 Shinji picked up some of the core messages in the statement:

1. Xiaopeng automobile is not a party to the case. Over the past year, Xiao Peng has provided a lot of assistance to the case and actively provided the electronic backup of Cao Guangzhi's working computer. In addition, Xiaopeng automobile also allows Tesla to contact the company's source code repository as of March 21, 2019 (the date when Cao Guangzhi was sued by Tesla) under the protection order of the court for evidence collection.

3. From the date of learning about the case, Xiaopeng automobile hired a professional third-party organization to conduct legal investigation and evidence collection. At present, there is no evidence that any Tesla source code, trade secret or protected confidential information is transmitted to Xiaopeng automobile company and its system.

It is reported that the hearing on the lawsuit will be held in the federal court of San Francisco next month.

The history of the case of Cao Guangzhi

As a major case in the field of self-driving, Xinzhi driving has maintained a high degree of attention. According to the disclosure of public information, Xinzhi drive tried to restore the key node of this autopilot lawsuit case and the two sides diverged.

The core object of this dispute is Tesla's advanced assisted driving autopilot system, which is also the core of Tesla's automatic driving technology.

New Zhijia sorted out the R & D line of Xiaopeng auto and the action track of the defendant Cao Guangzhi suing in Tesla:

Subsequently, in the reply of July 2019, Cao admitted that he had uploaded zip documents containing Autopilot source code to his personal iCloud account at the end of 2018;However, it denied stealing secrets and said that it had not transferred any trade secrets related to Tesla's self driving to Xiaopeng automobile, nor used these materials for the benefit of new employers.

Although not the defendant, Xiaopeng automobile immediately took over Cao's working equipment for evidence preservation and launched a third-party license issuing investigation after learning that Cao was sued on March 22, 2019,The results show that no Tesla information has been transferred to the system of Xiaopeng automobile.

New Zhijia also learned more about the differences between the two sides in a motion document of Xiaopeng automobile revoking or applying for a protection order and MPa. New Zhijia also made a key extract of the contents of the document.

1. It has been more than a year since the case was filed. Although Cao admitted some of Tesla's allegations, Xiaopeng said,Tesla did not actually accuse Xiaopeng of any wrongdoing or seek any temporary or preliminary injunction against Cao or Xiaopeng.

2. in the past year,Xiaopeng automobile provides Tesla with a wide range of information, there is no sign of any misconduct on the part of Xiaopeng.

3. On January 17, 2020, Tesla issued the second subpoena document to Xiaopeng automobile, and the two sides reached 10 agreements among the 16 requests in the subpoena, but there are still differences.

Xiaopeng automobile also pointed out that Cao was suspended by Xiaopeng automobile administration after he was sued. Before further notice, he could not use or touch any relevant account / system of Xiaopeng automobile. At the same time, his personal and work electronic equipment were confiscated, and he was deprived of all rights to access the system. So Tesla's claim is unreasonable.

But there is no evidence that the USB disk Cao introduced into Xiaopeng's car is the same as the previously destroyed USB disk. Xiaopeng said it had purchased several identical USB devices for engineers to use at work.

In addition, Tesla also seeks all documents related to the criminal case filed by Xiaopeng automobile against Zhang Xiaolang in early 2018. Tesla thinks: Zhang used to work in Apple California, using a similar method, misappropriating the employer's self driving trade secrets, and joining Xiaopeng. The greater the similarity between the two cases, the less likely they are to be purely coincidental and more likely to be the result of planning, coordination and deliberate arrangements.

But Tesla's lawyers also acknowledge that there is no information, any facts or evidence that Zhang's case has any relationship or connection with the allegations in this case.

On the whole, both sides have their own opinions. 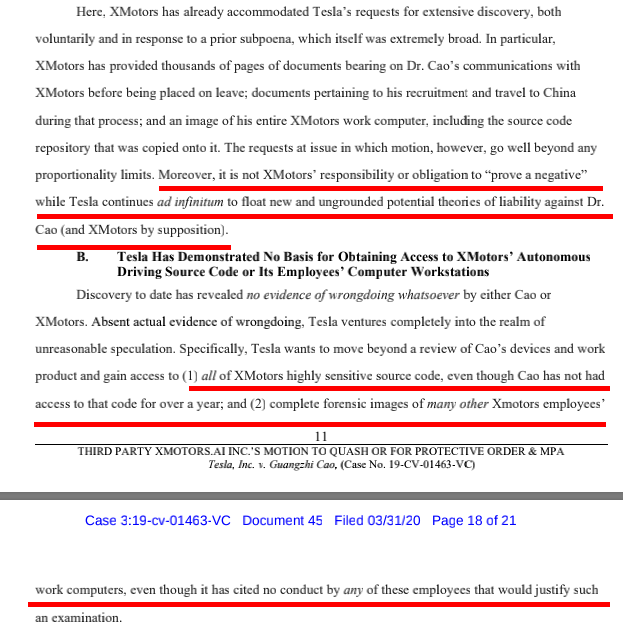 But Xiaopeng said,Has repeatedly and extensively complied with Tesla's reasonable evidence collection requirements, including thousands of pages of correspondence documents between Cao and Xiaopeng automobile. However,

In any case, there is no evidence of any misconduct by Cao or Xiaopeng at this stage. As for how the two sides will stand up to each other, new Zhijia will continue to follow up.

Both Tesla and Xiaopeng have shown great importance to the technology of automatic driving. The success of the Tesla Model 3 also confirms the appeal of assisted driving to car sales.

As the first tier of new car manufacturers in China, Xiaopeng motor is also working hard to build its own automatic driving system. It even invested heavily in building its own visual perception team and establishing an end-to-end closed-loop research and development system.

From the sensor configuration of model 3, G3 and P7:

The sensor configurations on both sides are not the same.

In terms of parking, Xiaopeng keeps the parking panoramic camera, which gives ultrasonic radar and visual fusion for parking recognition, which is very important for domestic scenes. But Tesla doesn't have a look around camera.

Another point is that in the whole automatic driving scheme, redundancy is very necessary. Xiaopeng has retained the supplier's redundant L2 scheme, and the whole vehicle has two sets of relatively independent sensors and control systems. Tesla has no redundancy.

In the processor part, Xiaopeng automobile adopts the dual processors of NVIDIA and Infineon, which are respectively responsible for the sensor sensing processing from XP and Bosch, and are redundant to each other. Tesla uses the FSD processor developed by itself to realize the sense processing of autopilot.

Related news
NVIDIA Tesla v100s low-key release: full speed up to turn into Tu Haojin
Xiaopeng automobile responds to the "secret stealing" automatic driving: it has been bullied by Tesla in the past year
13 years of history NVIDIA gave up Tesla brand in a low-key way: name collision with electric vehicles
NVIDIA gives up Tesla brand in a low-key way: because of its name collision with famous electric vehicles
NVIDIA classic computing card series Tesla to be renamed: too confusing with Tesla
Tesla official account tweet misuse Xiaopeng automatic driving video! Xiaopeng automobile pattern response
Hot news this week
The company announced the shipment data of 2021 Q1: the proportion of Huawei fell to the sixth place in the world at 4%
Huawei Hongmeng cross border stir financial industry, many banks and insurance institutions enter, so much imagination!
Many mobile phone users make complaints about 5G Zhang Guoquan: all mobile phones in China open 5G SA by default.
Sony's third generation noise reduction experience: comparable to the strongest combat power of real wireless noise reduction headphones
The most flagship Huawei watch is back! Huawei watch 3 Evaluation: full marks of harmonic OS function and endurance
News said the ipad Mini and iPad 10.2 ushered in a new design: Apple's latest launch before the end of the year
IPhone 13 Pro comes with the same model! Xiaomi 12 information exposure: equipped with ltpo adaptive high swipe screen
At 19:00 on June 9, Ma Weidu and Mai Jingdong enjoy a 50% discount on books purchased in the live studio of Shusheng shushuo
Henan satellite TV "Dragon Boat Festival wonderful tour" full version popular all over the network: netizens call content amazing
New people to do "new" business: preparing for the battle with Zhang Ying, a peach farmer in Yangshan
The most popular news this week
Accidentally, the second-hand iPad I bought on a certain platform overturned
QQ new expression "big dish Wang" dominates the screen: no matter how big the mobile phone screen is, it will never be blurred
Real book official announcement: a bit of apple flavor
Fluorite releases RK2 pro, a child care robot: can run and shake hands
Buy a Hedwig in Jingdong and you can enter Hogwarts? Jingdong 618 takes you to explore!
"To prevent brake failure, please overtake first"! Buick car stickers at the end of the car, but Tesla owners are crazy to leave the car
Microsoft colorful mouse camouflage layout reward: 179 yuan, 12 months for a battery
Jingdong 618 hard core E-sports good things straight down also enjoy super long interest free rush on the right
The red envelope returned by the couple after breaking up was rejected Court: wechat red envelope is a gift, not returned
Jingdong 618 enters the climax period, issue 10% off household appliance consumption coupon again, and enjoy the "bottom price" of the whole network!