Will Ruixing's fraud inspire the first long arm jurisdiction of the CSRC?

In the past few years, the financial fraud of Ruixing coffee has not been like "the storm in the teacup", but has been gradually calmed down and eased. Instead, it has been constantly fermenting and upgrading, and has repeatedly occupied the headlines.Recently, due to cross-border regulatory communication between Chinese and American regulators, regulatory investigation of the company, a new round of China equity credit crisis and other events, Ruixing coffee once again occupied the C position of the topic, causing widespread concern. 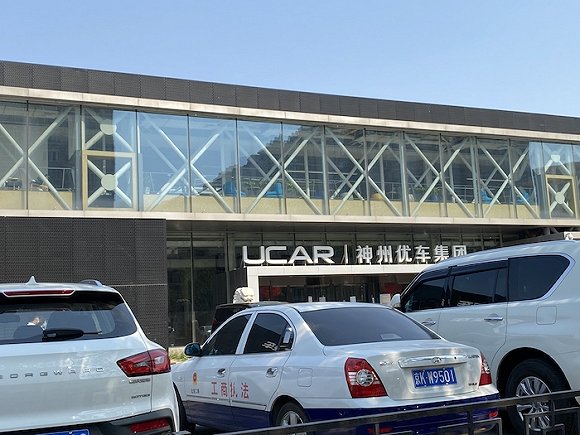 Relevant persons in charge of the CSRC said that the CSRC has always taken a positive attitude towards cross-border regulatory cooperation and supported overseas securities regulators to investigate and deal with financial fraud of listed companies within their jurisdiction.

The person in charge stressed that cross-border listing of enterprises is conducive to enriching investment choices in local capital markets and improving investment returns, which has proved to be a win-win choice. To improve the quality of information disclosure of listed companies is the common responsibility of regulatory agencies in various countries. It is in the common interest of global investors to deepen cross-border supervision and law enforcement cooperation. China Securities Regulatory Commission (CSRC) always adheres to the regulatory concept of market reverence, rule of law reverence, risk reverence and investor reverence, and is willing to strengthen cooperation with overseas securities regulatory agencies, including the United States, to jointly crack down on cross-border illegal behaviors and protect the legitimate rights and interests of investors in various countries according to law.

The CSRC has no direct response to whether it has been involved in the investigation of Ruixing coffee.

On April 27, it was reported that China Securities Regulatory Commission has sent an investigation team to Ruixing coffee, which has been involved in financial fraud scandal for many days, and many auditors are auditing Ruixing's financial situation. In addition, Ruixing coffee was taken over by the public security, industry and Commerce and other departments, the source of counterfeiting database was excavated, and all data was submitted.

In response to the above rumors, Ruixing coffee released a statement on the same day, saying that at present, the company is actively cooperating with the market supervision department to understand the operation of Ruixing coffee. The company and its national stores operate normally. 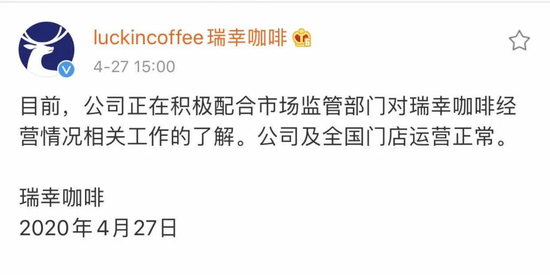 But the Chinese stocks listed in the US are experiencing a more general credit crisis.

On April 23, the chairman of the Securities and Exchange Commission (SEC), Jay Clayton (Jay Clayton), made a public statement saying he had warned investors not to invest money in U.S.-listed Chinese stocks in the near future as they adjusted their positions.

Zhongwei shares are directly named "angry". Such a statement is "unprecedented" in the words of many investment bankers. Even ten years ago, the CSRC's statement was quite implicit.

Clayton's reason is that PCAOB can't review the audit draft of China capital stock company, so it's more likely to make false statements that cause financial harm to shareholders.

It is worth noting that prior to Clayton's comments, the CSRC released a joint statement on its website entitled "significant disclosure of information, financial reports and other risks involved in investment in emerging markets, limited remedies", with five signed officials including Clayton.

The above statement is mainly aimed at the whole emerging market, but the Chinese market has been cited for more than 20 times. In particular, it was noted that, despite years of consultation with China's regulatory authorities, it was still unable to review the audit draft of China capital stock.

There is no doubt that the comments of the CSRC aggravate the credit crisis of China capital stock. Some insiders interpreted it as "the calm before the storm".

Liu Longzhu, acting lawyer of Ruixing coffee group lawsuit in the United States, believes that this means that the SEC may increase the intensity of review in the future. It is expected that more Chinese companies will be investigated and some Chinese companies may be sued in civil cases. If major problems are found, they may even be forced to withdraw from the market. This will make it more difficult for companies to go public in the United States.

Hong Hao, general manager of BOCOM international, stressed that it is estimated that recently Ruixing's financial fraud was sold short by the muddy water, and some other Chinese stocks were all in violation of regulations to varying degrees, so the CSRC, as the watchman of the capital market, had to give a voice to remind the risk. However, the direction of risk warning and law enforcement should be for the company, not for the region, otherwise there is a suspicion of regional discrimination. After all, there are many fraudulent companies in the United States, such as Enron in 2001, and GE General Electric's various financial problems found in recent years. We can't totally deny China equity because some Chinese companies have problems.

Some also believe that the SEC's comments may have deeper motives.

According to the relevant laws and regulations of China, no accounting firm that practices in China shall provide accounting manuscript to overseas without the permission of the regulatory authorities. Overseas regulators must obtain accounting papers through regulatory cooperation channels, including the branches of the world's four largest accounting firms in China. Although the regulation doesn't block the way, there are many difficulties for US regulators to obtain the audit manuscript of the general shares listed in the US. The essence of the CSRC's statement lies in the dispute over the jurisdiction of cross-border supervision over auditing between China and the United States. Take the opportunity of the financial fraud of Ruixing coffee and other shares listed in the United States to fight for cross-border regulatory power.

Long arm in the first case?

In response to the "audit papers" valued by the CSRC, the CSRC said in a response on the 27th that under the framework of cooperation such as the international organization of Securities Regulatory Commission (IOSCO) multilateral memorandum, the CSRC has provided 23 audit papers related to overseas listed companies to a number of overseas regulators, including the CSRC and the public company accounting oversight board (PCAOB 14 in total. In addition, in October 2019, China and the United States reached a consensus on the transfer of audit working papers of Listed Companies in the United States audited by Hong Kong accounting firms and deposited in the mainland of China. At present, the cooperation channels are unblocked.

Relevant persons in charge of the CSRC pointed out that in terms of audit supervision of listed companies, the CSRC has always attached great importance to promoting the establishment and improvement of quality control system, practice quality and the quality of financial information disclosure by strengthening the supervision and law enforcement of capital market gatekeepers such as accounting firms. At the same time, the CSRC actively promotes cooperation with overseas audit regulators. For the Chinese accounting firms that PCAOB requires to be registered in PCAOB, the cooperation between the two sides has never stopped, and they have been looking for an inspection scheme that can be accepted by all parties.

The person in charge said that it should be said that the cooperation between China and the United States is effective. Since 2018, in order to continue to promote audit supervision cooperation and maintain communication, China has repeatedly proposed to PCAOB specific proposals for joint inspection of accounting firms, the latest of which is April 3 this year, referring to the practice of international audit supervision cooperation. We look forward to receiving response as soon as possible and further cooperation with PCAOB.

According to the public information, Ruixing coffee is registered in the Cayman Islands, registered and issued securities by regulatory agencies outside China and listed on the Nasdaq stock market in the United States, not directly supervised by the CSRC.

However, the new securities law, which came into force on March 1 this year, gives the CSRC "long arm jurisdiction". In the fourth paragraph of Article 2 of the new securities law, the content of extraterritorial jurisdiction - securities issuance and trading activities outside the people's Republic of China, disturbing the market order within the people's Republic of China and damaging the legitimate rights and interests of domestic investors, shall be handled in accordance with the relevant provisions of this Law and investigated for legal responsibility.

This has also attracted the attention of many analysts, who believe that Ruixing coffee may become the first case of "long arm jurisdiction" in China's securities regulation.

Kuang Yuqing, the founder of lens company, a third-party research institution, believes that the "long arm jurisdiction" clause in the new securities law is applicable to Ruixing's fraud.

On the one hand, Ruixing's counterfeiting will certainly disrupt the domestic market order, destroy the market atmosphere, increase the difficulty of listing domestic companies abroad, increase the cost, reduce the valuation, and seriously damage the interests of these companies.

However, some analysts believe that lucky is not suitable for long arm jurisdiction.

Li Wenli, a professor at the school of law of Shanghai University of foreign trade and economic cooperation, believes that if Ruixing does constitute financial fraud or fraudulent issuance after investigation, the securities laws and regulations of the United States should also be applied, and it is difficult to apply the extraterritorial jurisdiction provisions of the new securities law of China.

Li Wenli points out that the place of registration of Ruisuke Coffee is not in China, the place of listing is in the United States, and it is difficult to say that market fraud has disturbed the "market order in the people's Republic of China ". As for investors' rights and interests, the main body affected by financial fraud is the legitimate rights and interests of U.S. investors, not domestic investors, the territory may only be through QDII investment of professional institutional investors, so the extraterritorial jurisdiction should not be used lightly.

Li Wenli further pointed out that CSRC's latest statement on Ruixing coffee incident means that CSRC and overseas regulators will jointly crack down on securities fraud through cross-border cooperative supervision. China Securities Regulatory Commission only has the investigation responsibility based on the international regulatory cooperation agreement. The group litigation of American securities regulatory or American investors can be launched, but the investigation of fraudulent issuance or market fraud outside China (in China) can only rely on the assistance of China Securities Regulatory Commission.

Zang Xiaoli, a lawyer with Beijing Yingke Law Firm, also pointed out that it is necessary to crack down on financial fraud and information fraud in both overseas listed companies and domestic listed companies, so as to boost the image of Chinese enterprises and purify the domestic and international capital markets. It is expected that after the investigation of Ruixing coffee's financial fraud in China is completed, the CSRC may transfer the investigation results to the US SEC for handling by US regulators.