On April 29, pinduoduo released to the whole staff an integrity notice that Chen Mou, a former advertising business employee, and his briber were arrested by the procuratorial organ on suspicion of commercial bribery. In fact, pinduoduo is not the first time to expose "domestic clown". As early as March 6, the background of pinduoduo merchants synchronized the notice that Yunwei, the second merchant of China Merchants, was arrested by the Procuratorate on suspicion of accepting bribes from merchants, and Liushen, the manager of China Merchants, repeatedly accepted bribes from merchants and was taken criminal compulsory measures by the public security organs.

Fight against Corruption: from sophomore to Director

On March 30, pinduoduo merchants synchronized a list of merchants who bribed platform employees for their own interests because they violated the principle of good faith management. Because the above behaviors touch the bottom line of the law, pinduoduo platform said that it would clear all the stores of the merchants involved according to the law and regulations and never cooperate.

According to the first quarter integrity white paper released by pinduoduo on April 29, since January 1, 2020, the platform has reported a total of 18 criminal cases of various types, and the public security organs have detained a total of 28 people involved in criminal cases, including 3 employees of pinduoduo who have been approved by the state procuratorial organ for arrest or forced measures by the public security organ, and 6 employees who have been dismissed and never employed by the company. From the list, these people include the investment promotion junior two, operation staff, investment promotion manager, business director, etc. 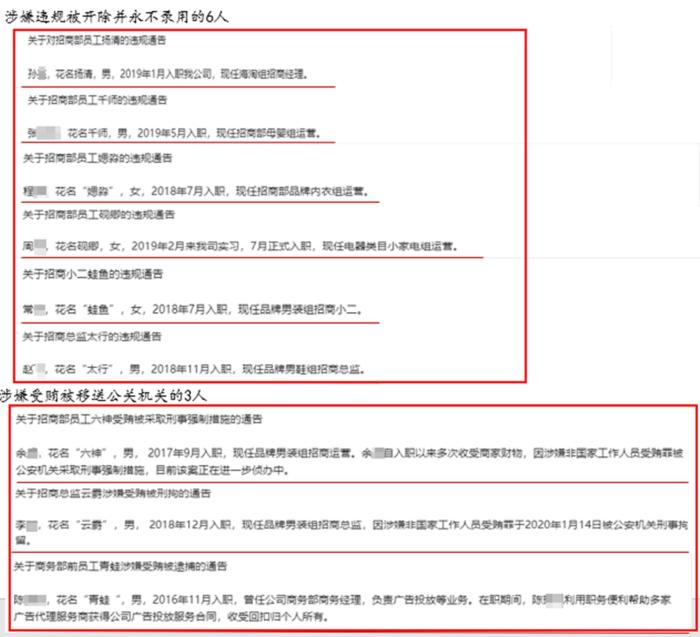 Fighting against corruption is a bit of a tiger. We are not afraid to block the door

The person in charge of integrity and Legal Affairs Department of pinduoduo said that the company is not afraid of door-to-door "blocking" acts, and is always on the platform and providing services to businesses and cooperative suppliers that have been verified and suspected of bribing platform employees for their own interests, as well as platform businesses that collude with illegal groups such as shoddy counterfeiting, overseas gambling money laundering, false transaction fraud and seriously infringe the rights and interests of consumers Should be removed from the list of merchants and never cooperate.

Pinduoduo believes that the commercial bribery cases involving internal employees seriously violate the employee code of "one hole for effort and one hole for profit", seriously undermining the company's principle of integrity and "duty" values, some of which have been suspected of illegal crimes due to the serious circumstances of the case. "The company has always adopted a zero tolerance attitude towards the above behaviors!"

Before pinduoduo, meituan and Baidu were busy fighting corruption

There are also meituan and Baidu in the line-up with zero tolerance for corruption recently.

On April 28, the US delegation reported the results of investigation and handling of criminal cases of ecological anti-corruption in the first quarter of 2020. According to the report, from January 2020 to now, meituan has investigated and dealt with 12 criminal cases of various kinds, and transferred 33 people to the public security organs for investigation and treatment, including 7 internal employees, including middle and senior management cadres such as Zhu Hao, director of Hardware Department of two rounds of LBS Platform. Most of the employees involved in the case were put on file for investigation, criminal detention or even arrested with the approval of the inspection authorities for accepting bribes. 26 partners were investigated and punished. They were detained by the police for bribery and platform subsidies.

On April 21, baidu professional ethics committee reported a case of employees suspected of serious violation of discipline and law. Wei Fang, former vice president of Baidu group, was found suspected of corruption after investigation by the company. According to the notice, the company has transferred Wei Fang to the public security organ for handling according to law. "Wei Fang has not only deviated from Baidu's clean workplace culture, trampled on the bottom line of the company's professional ethics, but also touched the red line of the law." In recent years, Baidu has reported and dealt with a number of violations of disciplines and laws by employees, including directors and senior executives at the level of vice president, whose anti-corruption measures can be called fierce.

In order to fight against corruption, every family has its own skills. Baidu has a professional ethics committee and a professional ethics construction department, which has a high degree of independence. Even without the leadership of relevant business departments, it can directly carry out investigations and report directly to the top management.

Meituan issued the letter of complaint to partners - meituan's five knowledge of honest cooperation to prohibit employees from taking cards from the system level and prevent partners from cheating and bribery. 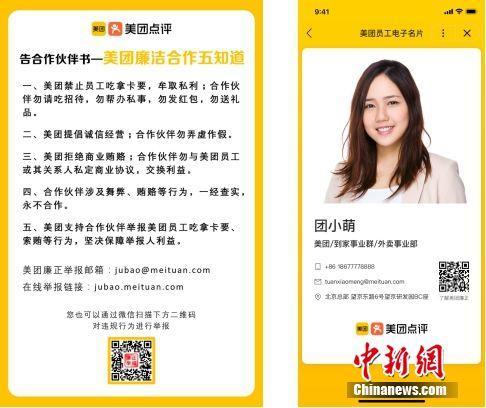 Pinduoduo also called for all major Internet platforms to actively build an anti commercial bribery alliance in the future and share databases of former employees and suppliers suspected of violating laws and regulations.

If this goal is achieved, the Corruptors in this database will really have to lie down.

Related news
Chromium version of Microsoft Edge browser will ship with Internet Explorer
Internet Archive: recording the forgotten Internet
IPhone users call Android Internet Explorer on their phones
Microsoft will gradually stop supporting Internet Explorer 11
Hot news this week
Titanium Media Publish Assesum: People's Bank: Digital RMB Winter Olympics pilot has entered the sprint phase; Tesla announced that 250,000 Powerwall energy storage power stations have been installed
Close to the apple millet, two weeks of consecutive weeks, China Smartphone second: 3 years, the world's first
Alibaba and Tencent have received more than half of the 43 antitrust fines, and lawyers say the penalties are likely to increase
Study on the sequelae of COVID-19 in the Chinese team: Shortness of breath, depression and other problems still existed nearly one year after discharge
Capital does not love SAIC, "flying" subsidiary, Jet Hydrogen Technology intends to go to science and technology board
Huawei redefines one of the three major communication networks of the underground communication network
Tencent responded to "APP to get ridiculous": Upgrade APP is now downloaded for user rights protection
Gree announced the implementation of the double-holiday work system Dong Mingzhu from the media voice netizen God reply
The approval of Sensetime's IPO gives the metasurverse concept another ride
Netease Cloud Music will soon be listed on the back of 200 million monthly live users how to make money
The most popular news this week
Huawei Heavy Machinery is re-incorporated! Generators except logo exactly
Samsung PCIe 4.0 hard drive upgrade: more heat sinks fully support PS5
New crown latest variament has emerged in early November: New York, USA has a bad feeling
Black Friday us stores face embarrassing situation! Got stuck in the neck
Vehicle positioning signal weak puzzle! To be completely solved by Huawei
Apple resumed sales of the iPhone and iPad in the country after an emergency removal, with prices rising by 25%
In the first 10 months of the year, China's software business revenue increased 19.2%
Guangming Daily: Bid farewell to disorderly competition, platform economic development to tighten the bottom line
Can WeChat transfer borrowed money?
Sources say Huawei has begun mass production of a generation of foldable phone price surprise