Q1 mobile market share announced: Huawei is the second largest in the world and the first in China

In March, however, the spring is still chilly. Affected by the epidemic, the mobile phone market, which was expected to recover, suffered an overall decline in the first quarter, and all major manufacturers are facing unprecedented severe tests.

On April 30, according to IDC data, global smartphone shipments fell 11% in the first quarter. Because of the spread of the new crown epidemic in the world, the top 3 mobile phone brands have suffered from different degrees of attack in terms of shipment volume. 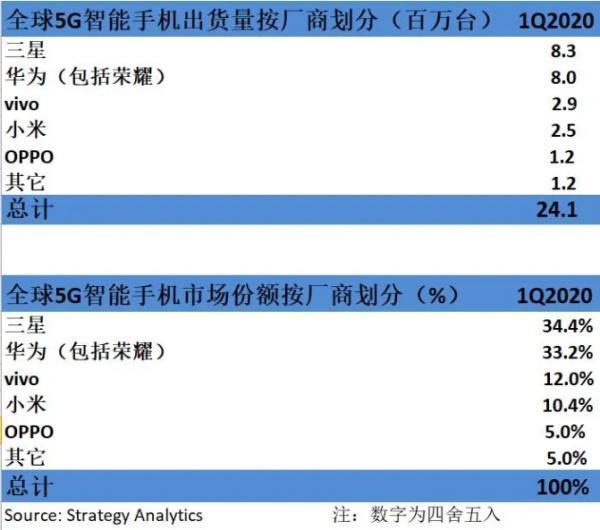 The new machines released in the first quarter, such as Huawei's P40 series and Samsung's S20 series, will also be reflected in the second quarter's shipments, but unless the gap of more than 10 million units can be opened, the basic order will remain the same.

According to counter point data, domestic smartphone sales fell 22% in the first quarter, an unprecedented decline. China's mobile phone manufacturers are the first to bear the brunt of both demand and supply. For example, blue and green factories that rely heavily on the offline market are down nearly 30%, down 27% and 30% respectively. The most unexpected was millet, down 35% year on year. 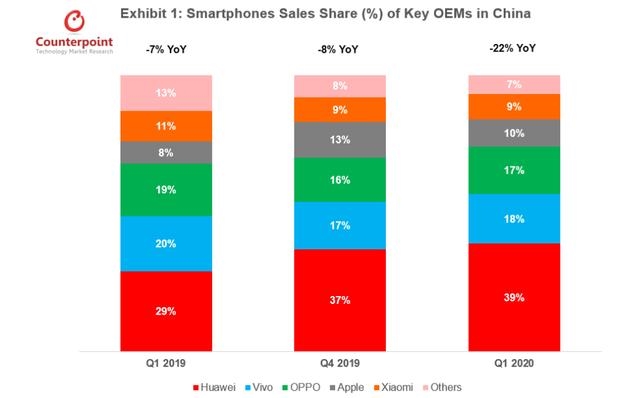 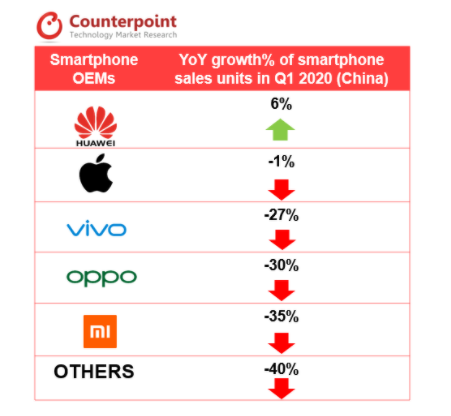 Huawei is the only brand that achieved sales growth in the first quarter. The sales of 28.7 million units increased by 6% compared with the previous quarter, surpassing the sum of the second and third blue and green factories, making a beautiful contrast with the overall market performance.

In the past March, as the domestic epidemic eased and mobile phone capacity gradually recovered, Chinese companies were able to take the lead in returning blood, the Chinese mobile phone market

Huawei take the opportunity to climb, Mate 30 series, Nova6 series and other products to bring the industry's leading image experience, the optimal solution of the 5 G solution, and the first to experience the full scene seamless connection of the distributed operating system

Across the epidemic, stop work

How can Huawei achieve steady development under the impact of the epidemic? 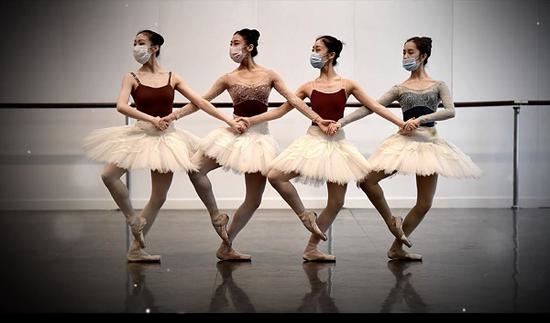 The self-developed flagship level 5 G SoC brings 5 G experiences of good speed and power consumption. The distributed architecture-based EMUI operating system has the ability to interconnect and lay the foundation for the whole scene intelligent ecology. The Huawei application market AppGallery also gradually go to sea with the Mate 30 series and the P40 series

Chu Ping, president of Greater China in Huawei consumer business, said in a media interview that

In the short term, it is an indisputable fact that the epidemic has had a negative impact on global mobile phone manufacturers. But with the global epidemic

Related news
Huawei Q1 smartphone shipments skyrocketed by 50% to become the world's first stable?
Lu master Q1 Android mobile market share: Huawei glory cut 33%
Q1 mobile market share announced: Huawei is the second largest in the world and the first in China
Xiaomi Q1's performance against the trend grew faster than expected, and the two engine strategy continued to achieve results
India mobile Q1 shipments out! Domestic mobile phone dominates Samsung's list
Q1 the world's mobile-phone market has suffered the worst downturn ever: why is Xiaomi the only one to rise against the trend?
Transfer Q1 second-hand mobile phone market: iPhone11 and other users enter the transformer cycle
Domestic Q1 mobile phone shipment ranking: OPPO topped the list
Apple became the second largest smartphone vendor in Q1 in 2022
Hot news this week
With the NIL technology, Canon wants to provide China with a lithography machine comparable to the EUV
Genius hacker Geohot promised Musk 12 weeks to fix Twitter search, but posted for help because he wouldn't react
Google's parent company is planning to cut tens of thousands of jobs
The Long March 9 is basically confirmed: the low-orbit carrying capacity of 150 tons can carry the entire space station into space
A small plane in the US has crashed into a 30-metre high voltage power line and got stuck: 80,000 people affected
Alibaba launched a new cross-border e-commerce platform in Spain, aiming to operate independently in the middle and high-end market
Google is concerned that Microsoft's acquisition of Activision Blizzard will affect the ChromeOS experience
Can recording others' wechat chat records be used as evidence? The Beijing Internet Court has an answer
The second generation Snapdragon 8 flagship! Mi 13 toughened film appeared: four sides and other narrow screen accounted for a stable ratio
A Tesla crashed into two cars in Taizhou, Zhejiang province, killing two and injuring one, police said
The most popular news this week
Eggs don't fit in one basket: Some of the Snapdragon 8 Gen2 is manufactured by Samsung
128 core 256 threads! AMD Zen4c is here: Arm is cornered
Breaking the spell of "Android 3 year must card", the new Breguet mobile phone will be sold for the first time tomorrow: from RMB3499
Be careful with your phone for a long time! The aunt played with her mobile phone so much that her fingers got stuck
More conscientious than Google, the OnePlus promises a 4-year upgrade: Android 17 beckons
What do Chinese teenagers do online? It's comforting to be third and first in gaming
Tmall sought 500 million yuan in loans from ofo affiliates and Dai Wei
Tencent Holdings: bought back 36,200 shares at a total cost of HK $10.606 million
Tuniu's third-quarter revenue fell 32% from a year earlier to 7,790 yuan
Xiaomi 13 press conference new product summary: In addition to the phone there is a monster new