Sharp dragon 4000 leads AMD in offering the strongest zen3 day group this year: IPC up to 15%

With the exception of the desktop version of the seven nm Zen2 APU,AMD, whose layout is almost complete over the course of a year,, this year's focus will shift to a new generation of processors, the seven nm process Zen3, and this time it will be a full-scale attack on the 4000 desktop, Threadripper 4000 and EPYC.

Amd has promised to launch new CPU products every year. It has done so since 2017. The sharp dragon 3000 series launched 7Nm zen2 last year, This year's Ruilong 4000 desktop version will be upgraded to TSMC 2nd generation 7 nm process 7 nm and Zen3 architecture。 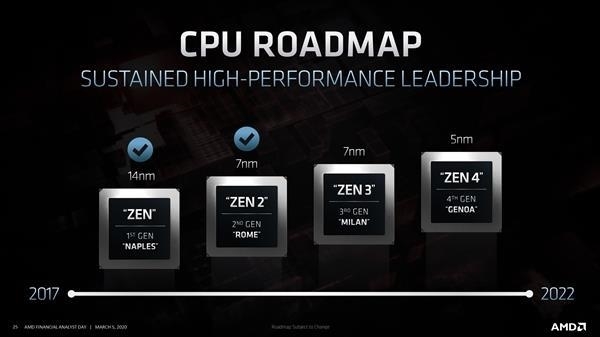 According to the previous disclosure, although the number of cores of zen3 architecture will not continue to increase, the internal changes are not small, The single CCX will have eight cores to take full advantage of the 32 MB cache, while the current sharp dragon processor has a single CCX of four cores and two CCX to form a CCD..

Plus other improvements,Zen3 architecture is expected to improve IPC performance by 10-15% Taking into account the 7 nm process's power consumption and frequency enhancement, the Zen3 generation is expected to lead in performance.

This year's product portfolio will also be AMD in addition to architecture and process upgrades, with the introduction of the main market-oriented ruilong 4000 desktop version, the HEDT burner-oriented ruilong Threadripper 4000 and the data center market, code-named EPYC (should be EPYC 7003 series) processors, three product lines at the same time upgrade.

For players, the most important thing this year is of course the desktop version of the sharp dragon 4000, and it will also be matched with the new generation of 600 series chipsets. There are new motherboards such as x670, b650, A620, etc. to fully support PCIe 4.0 needless to say, it will also support the latest USB4 specification.

The Ruilong 4000 series will be AMD last AM4 platform, The next Zen4 will not only upgrade the 5 nm process, but will also replace new slots, which are expected to support PCIe 5.0 and DDR5But it will be around 2022.

Related news
AMD officially released the second generation of Xiaolong: 64 core 128 thread system IPC performance soared 23%
Deputy general manager of AMD: zen3 is worth looking forward to the new architecture IPC performance
University Professor: AMD's Zen 2 architecture IPC performance is only 67% of skylake's four years ago
Amd Zen 3 processor IPC performance increased by 17%, floating point performance increased by 50%
Amd CTO talks about zen4 / zen5: upgrade the performance of the first generation of IPC in 12-18 months by at least 7%
In October, AMD zen3 processor and rdna2 optical tracking card were launched
Sharp dragon 4000 leads AMD in offering the strongest zen3 day group this year: IPC up to 15%
Amd zen3 single thread performance exposure: 20% higher than zen2
26% performance improvement amd explains zen3 architecture change: Game optimization
Hot news this week
With the NIL technology, Canon wants to provide China with a lithography machine comparable to the EUV
Genius hacker Geohot promised Musk 12 weeks to fix Twitter search, but posted for help because he wouldn't react
Google's parent company is planning to cut tens of thousands of jobs
The Long March 9 is basically confirmed: the low-orbit carrying capacity of 150 tons can carry the entire space station into space
A small plane in the US has crashed into a 30-metre high voltage power line and got stuck: 80,000 people affected
Can recording others' wechat chat records be used as evidence? The Beijing Internet Court has an answer
Alibaba launched a new cross-border e-commerce platform in Spain, aiming to operate independently in the middle and high-end market
Google is concerned that Microsoft's acquisition of Activision Blizzard will affect the ChromeOS experience
The second generation Snapdragon 8 flagship! Mi 13 toughened film appeared: four sides and other narrow screen accounted for a stable ratio
A Tesla crashed into two cars in Taizhou, Zhejiang province, killing two and injuring one, police said
The most popular news this week
QQ membership via SMS has become a thing of the past: Tencent officials said the relevant business functions have been offline
Two men ransacked an Apple store and made off with more than 200,000 products: a textbook move by the employees
South Korea 2-1 Portugal repeat Asian miracle: Lei Jun with Xiaomi 13 thumbs up
The standard version is unbeatable and sells for 3,999 yuan for Mi fans
Two new Huawei devices are ready to launch: one is more creative
For the first time ever! NVIDIA graphics card to play the game flash screen must refresh the BIOS
Samsung Galaxy Z Flip5 exposure: Larger screen, fewer creases
What is this picture? Intel next generation Fever U also has 6 cores!
1W less than 40 cents 550W gold medal full module power 199 yuan RTX 3060 are enough
Viral 'Coronavirus Medicine Sequence' : Reliable? Experts guide the way