Which is more suitable for you?

In the morning of May 7, it was said that Apple's airpods is undoubtedly the leader in the real wireless Bluetooth headset. However, in the past two years, many brands have begun to introduce competitive products to challenge it. Google recently released its second-generation pixel pads headset. Can the new Google pixel pads challenge Apple's airpods? Macrumors, a foreign media, brings a detailed comparison between the second generation of pixel buses, airpods and airpods pro. Sina digital compiles it for you. 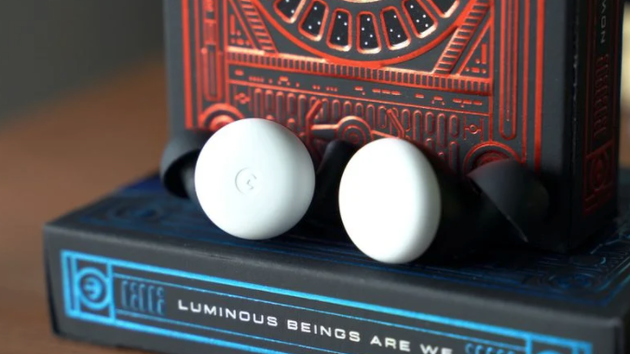 Apple AirPods a wireless charging box for $199 and a single machine for $159. Apple products are usually more expensive. The $179 price of google's Pixel Buds second generation is somewhere in between, much cheaper than the $AirPods Pro249 price Pixel Buds the second generation, but it does n' t have the initiative to reduce noise. 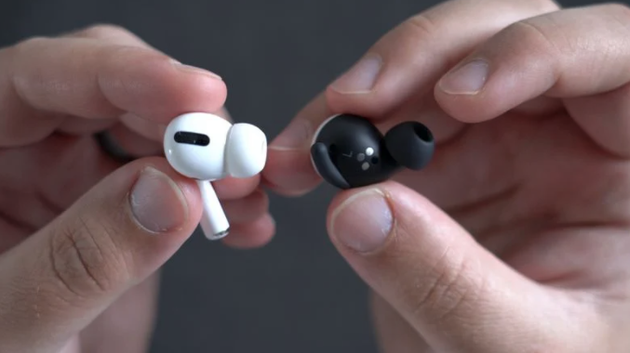 Pixel buds II still has some unique designs. Its matte white Mentos sugar shaped body is located on the outside of the ear and provides space for gesture operation.

However, google didn't think much about weight in Pixel Buds second-generation designs. which is more than a gram heavier than the apple AirPods, Pixel Buds the second generation of charging boxes. portability is the selling point of all wireless headphones, weight is important. Apple's AirPods is therefore a lighter option for people who often go out. 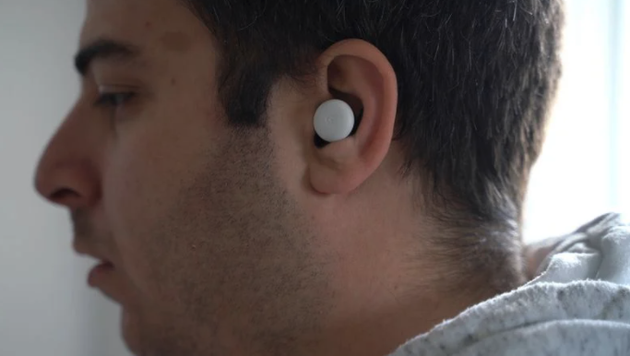 The pixel pads are comfortable to wear, but as with any earphone, long-term use can cause ear fatigue and some earache. If you wear it for a short time, the pixel pads and the "airpods" and "airpods Pro" used by most people are very comfortable. 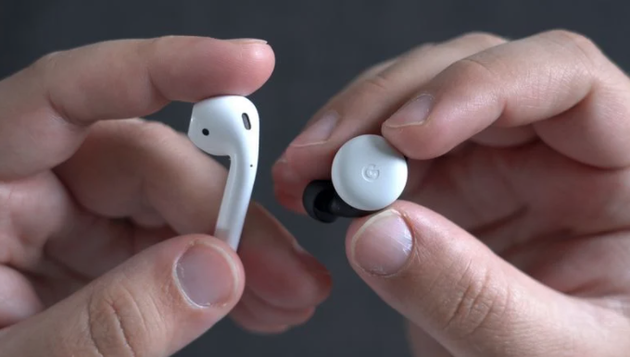 Support to control volume by sliding left to right

Outside, a touch area like Mentos is useful. Tap once to play / pause, twice to play the next track, and three times to return. There is also an option to control the volume by sliding left to right, which is a missing feature of the airpods family.

Pixel pads can handle music and video very well. Low frequency, medium frequency and high frequency are separated, and the sound of different instruments can be heard clearly. However, pixel buses have been lacking in bass, but macrumors believes that the sound quality of pixel buses is better than airpods, close to airpods pro. 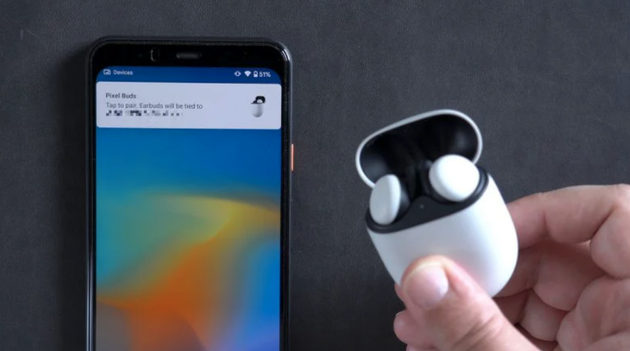 Of course, there are still some differences between the two. Pixel pads II uses so-called "hybrid acoustic design", which uses earplugs to close off external noise and space vents to eliminate any "in ear" feeling. The result is that more external sound can be blocked, and the sound played by headphones can be left in the ear more, so as to improve the noise reduction effect. Therefore, the second generation of Google pixel buses is slightly better than the second generation in the side-by-side listening comparison.

However, there is a problem with the second generation pairing of pixel buses. Without music playing, the right earplug makes a buzz. It is interrupted when playing music, but can be heard during a call.

continuation of the journey

The test of whether a pair of wireless headphones is good enough is the duration. After all, frequent charging is inefficient. Apple's airpods can be used for five hours in a row, while Google's pixel pads II is similar. Both products come with a charging box, which can be stored when not in use. With a charging box, Apple's airpods can last up to 24 hours, as can the second generation of Google's pixel buses. So in the range comparison, they are even. 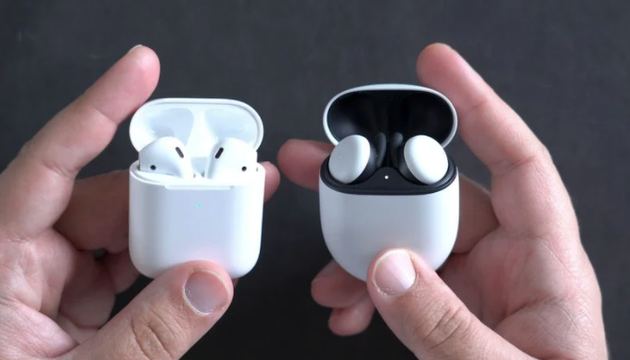 Functionality and ease of use

Pixel Buds second generation is much richer in functionality, supporting IPX4 waterproofing, bluetooth 5.0 technology, google translation, and adaptive sound. Using adaptive sound applications, it can dynamically adjust the volume when you move from a quiet home to a noisy street, and vice versa. 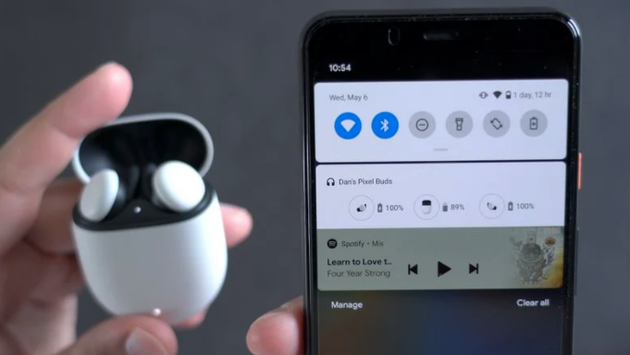 同“欤”IPhone When paired use, Pixel Buds is equivalent to any other Bluetooth headset without special function, but when used in conjunction with Android, more functions can be used.

The final foreign media macrumors give advice, for ‌iPhone‌ users, there is no reason to buy Pixel Buds second generation, because AirPods‌ and iPhone match better, but for Android users, the second generation is worth considering.

Related news
1MORE called apple sony! A real wireless headset is AirPods.
Developers say: after Baba is you became popular, how to play new games calmly?
Why does "one more thing" Apple make its own chips?
I'm highly thankful to you Dr Akhere for all the help you ha
Hot news this week
Meet the opportunity of the times: the omni channel era of mobile communication in the eyes of practitioners
Can new crown vaccination affect sperm? The scientists concluded that there was no substantial effect
Three major operators will delist from the United States: the United States seriously undermines normal market rules and order
Qualcomm Mengpu: Qualcomm has always been the role of technology empowerer, enabling various industries with 5g and AI
Do you have to pay taxes for the high popularity rate? Chinese electric vehicle companies vie to enter Norwegian Market
It is said that India has not approved the import of WiFi modules from China, and many companies have delayed the launch of new products
It's an "irreversible" three pole battle of automatic driving, with Dajiang's entry, Huawei's attack and Baidu's insistence
The brand strategy of Jingdong life service of consumer Expo has been continuously completed, and the three kilometer life service circle category has been further expanded
2021 survey report on employment of rural women in China: more and more rural women are employed at home, and 60% of the respondents say they will wear light make-up when they go out
Nintendo, the most powerful legal department in the East: ask the mobile game company to compensate 9.6 billion yen
The most popular news this week
AMD and "ex girlfriend" lattice core decoupling: in the future, we can choose any manufacturer to process chips
After sales processing time shortened from 3 days to 3 hours, Alibaba creates "mobile workbench" for businesses
799 yuan! Pre sale of Xiaomi noise reduction headset Pro: support 40dB active noise reduction
What's the situation of the first batch of factory e-commerce people going to the sea now
Ali Zhang Yong responds to the administrative punishment of the State Administration of market supervision: sincerely accept and resolutely obey
Win10 push the latest system upgrade! Solve the problem of high CPU utilization rate of multitasking
Jingdong Logistics has 260000 employees, with an average monthly expenditure of nearly 9000 yuan
Refuse to light up card: AMD Navi 24 small core also has 1024 stream processors
The host of the game peed in the hot water bottle of the hotel and threatened to give the next guest a drink
Indian doctors warn that cow dung treatment is ineffective: it could also complicate the epidemic