On the evening of May 7, Lu Weibing, President of Xiaomi group in China and general manager of redmi brand, published the top 10 best-selling models of canalys in the world in the first quarter of 2020.

According to the list, redmi accounts for three of the top 10 best-selling models in the world,Redmi note 8, redmi note 8 pro and redmi 8A respectively. Among them, redmi note 8 performed the best, with sales volume second only to iPhone 11. 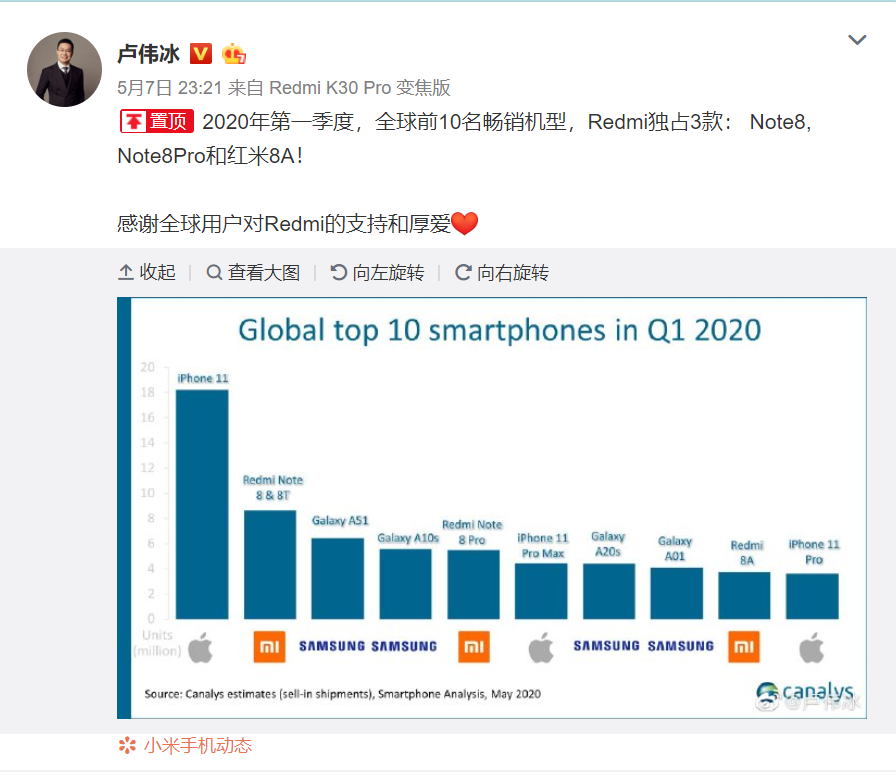 This week, redmi announced that global sales of note 8 series exceeded 30 million units.Lei Jun, founder and CEO of Xiaomi group, said that the weight of more than 30 million mobile phones in redmi note 8 series is equivalent to 1776 adult elephants, which means that an average of 130000 people place orders every day.

It is worth mentioning that Lu Weibing said in his microblog that redmi will have a surprise this month, suggesting that the new redmi Note Series is on the way, and it will carry the MediaTek Tianji 800 Series SOC.

It is expected to be officially released this month, when the new products of redmi Note Series will be the redmi 5g mobile phone with the lowest price so far, which means that the market competition of 5g mobile phones has officially entered the thousand yuan market from the middle and high end, which is worth looking forward to.

Related news
2019 Apple iPhone shipments in China plummeted by 30% in 2019
Lu master Q1 Android mobile market share: Huawei glory cut 33%
Top 10 Q1 models in 2020: redmi note 8 is second only to iPhone 11
Xiaomi Q1's performance against the trend grew faster than expected, and the two engine strategy continued to achieve results
Q1 the world's mobile-phone market has suffered the worst downturn ever: why is Xiaomi the only one to rise against the trend?
Hot news this week
***
Ren Zhengfei said at the glory farewell meeting: don't let the tie be broken; new glory should regard Huawei as its opponent
Panorama of China's AI chip financing in 2020
Xiaomi's "iron hoof"
China Film Golden Rooster Award Opening of Xiamen Nov.27 with Huawei to launch the "New Image Mobile Film Project"
Huawei: mate 40 series can give priority to upgrade Hongmeng system in December
Tencent has seen through a variety of MOBA AI technical methods AI absolutely understand the introduction of an upgraded version
Limited expansion of SMIC's production under US export control
To be Huawei's strongest competitor, glory's latest progress is exposed: several branches have been set up
"Star Park Plan" into Suzhou Tencent security hand-in-hand security experts interpretation of "such protection 2.0"
The most popular news this week
After that, Sutter will completely withdraw from the European mass market
Researchers say Facebook is removing "key evidence of war crimes"
Lighten the server load, Blizzard opens the free service transfer service of world of Warcraft 9.0
Unsolved mystery: the United States quickly removed the mysterious metal objects in the desert of other states
Oppo x 2021 scroll mobile phone: a potential alternative to folding (video)
Tesla is exposed to be able to watch the car camera live! Netizen: stay away from Tesla
The Supreme Court of the United States or the Supreme Court will lead to changes in the use of computers
Airbnb and "America Hungry" Doordash overvalued
Moving company's website dominates the screen industry chain: 5000 yuan on baidu home page
Charging 15 minutes, 250km range! Tesla builds a new factory in Shanghai: production of V3 overcharged piles