2020 is probably the most special year since the iPhone came out. This is the second time that Apple has released new iPhone products twice in a year (the last time was 2016). The new product in the first half of the year has been announced, that is, iPhone se (second generation). But unlike 2016, this year's iPhone is also facing a major technology development node, that is, mobile communication iteration of 4G to 5g, which makes it more special.

Novel coronavirus pneumonia is also a new variable that spreads across the world. Contrary to expectation, it has a global impact on iPhone.

Therefore, the iPhone 5g new product in 2020, which will be released in the second half of the year, deserves special attention.

IPhone's biggest upgrade since entering the era of full screen

Recently, there is the latest confirmation about the new iPhone.

Of course, the new iPhone to be discussed in this article, according to the past naming rules, is likely to be named iPhone 12 series. In fact, shortly after the release of the iPhone 11 series, a lot of revelations about the iPhone 12 series have appeared - which is also the fate of all generations of new iPhone products.

Among the known content, the iPhone 12 series will have four models, which are divided into two categories: standard series and Pro Series. 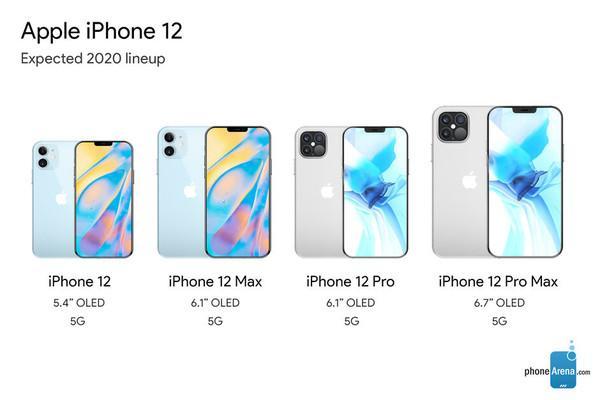 Based on this, everythingapplepro, a YouTube video blogger with more than 8 million fans, announced on May 10 the features of the heavyweight products to be carried in the iPhone 12 series:

Everythingapplepro also stressed that the message was confirmed.

Specifically, the two models of the iPhone 12 Pro Series (6.1 inch and 6.7 inch) will be able to have a high refresh rate of 120Hz, i.e. promotion function, and be able to switch between 60Hz and 120Hz refresh rates - in fact, promotion has already appeared in theiPadFeatures on Pro.

In fact, the iPhone 12 series will use a 120Hz high refresh rate screen, which has been revealed before, but this time it is specific to specific models.

In addition to the high refresh rate of 120Hz, everythingapplepro claims that the new features of the iPhone 12 series that can be confirmed include the following:

It is worth mentioning that the battery capacity of iPhone 12 Pro Max will also be upgraded to 4400 MAH in the explosion of everythingapplepro - in contrast, the iPhone 11 Pro Max will be 3969 MAH.

Of course, in addition to these, A14 bionic with 5nm process and Qualcomm snapdragon x55 5g modem with 7Nm process will be standard for iPhone 12 series.

Overall, the new iPhone 5g in 2020 is the biggest upgrade of the iPhone since it entered the era of full screen in 2017.

For many companies, novel coronavirus pneumonia outbreaks the expected impact of the outbreak. How can apple be exceptional?

People were waiting for the 5g version of the iPhone, which would curb the sales of the iPhone 11 series (only 4G version) - but the sudden outbreak made iPhone sales even worse.

This is first reflected in the Chinese market.

China has closed China business in the Apple Store (official retail store) since February 1st, and the call center and offices have been closed. In mid February, apple reopened the city's Apple Store shops, business hours were much shorter than normal.

As a result, iPhone domestic shipments accounted for 7.8%, or 494000. From this calculation:

In February 2020, Apple's smartphone shipments in the Chinese market fell by 60% year-on-year and 78.52% month on month.

Such a decline is not tragic.

Of course, the decline of iPhone sales in China did not affect the global revenue data too much from the subsequent financial report, which showed that the revenue from iPhone reached 28.962 billion US dollars, down 7% from 31.051 billion US dollars in the same period last year.

According to data from IDC, a market research organization, Apple's iPhone shipments in Q1 in 2020 were 36.7 million, down only 0.4% year on year, mainly due to the performance of iPhone 11.

Novel coronavirus pneumonia spread to China in April, but Apple closed all the Apple Store retail outlets outside China's mainland market. This is absolutely fatal to iPhone sales.

In fact, according to the latest market research report released by keybanc, a market research company, iPhone sales in April 2020 fell by 77% year-on-year and 56% month on month.

Don't forget that in April 2020, apple did two things to stimulate iPhone sales: However, with the spread of the epidemic, in the face of the decline of iPhone sales worldwide, Apple's initiative is basically unable to save the situation.

What should I do?

On the one hand, of course, Apple has a lot of cash flow, which can survive the global epidemic. On the other hand, although the epidemic has affected the pace of iPhone 12 series products, fortunately, the epidemic has been controlled in the Chinese market, so the impact is limited.

So the iPhone 12 series is particularly important.

It needs to be good enough, eye-catching enough and persuasive enough for the money holding consumers to open their wallets and buy the latest iPhone 12 series after the release - for 5g on the one hand, but also for an iPhone with larger upgrade and better use on the other.

So apple can't afford to lose or delay the iPhone 12 series. It must come to consumers at the right time with the best product features and the most persuasive price.

On the one hand, as the mobile communication industry moves from 4G to 5g, iPhone chooses to launch 5g in 2020 to meet this historical development opportunity. Especially when major Android manufacturers have launched new 5g mobile phones, apple is also imperative to 5g.

On the other hand, the shape of the iPhone itself will also change, which will completely abandon the home button and touch ID fingerprint recognition function, so as to completely embrace the full screen. The new iPhone se is more like a period Apple set for the previous iPhone.

From this point of view, the iPhone 12 series is more like a milestone, which is too important for apple.

Related news
Apple 2020 new product outlook: 5g iPhone / iPad / Apple watch series 6, etc
What can I expect from Apple watch series 6?
Apple watch series 6 and apple watch se out of the box (video)
Apple Watch Series 7 is the same as the S7 chip CPU
Hot news this week
Sources say Penguin Random House's deal to buy Simon & Schuster has fallen through
Any chance of taking over the agency? Sources say Tencent has been in contact with Blizzard for at least a year
Blizzard's founder responded to NetEase's contract renewal: Cooperation is a two-way street, and we will do our best to make Blizzard games accessible to Chinese players
Ali suddenly released a new chip, the domestic chip breakthrough, abandoned the American chip fantasy
Better than Huawei or Apple? It is revealed that Samsung S23 uses satellite communication: can also space voice
Players recognized as the best of the year! The Old Man Ring won four awards at the 2022 Pension Rocker Awards
According to sources, TSMC replaced Samsung to win a large order of Tesla's assist driving FSD chip, based on the 4/5nm process
Today is the 18th anniversary of Blizzard's World of Warcraft: unfortunately, the national service will be discontinued in January
Jinshanyun reported revenue of 1.97 billion yuan in the third quarter, down 18.4 percent year on year
Xiaomi Q3 has not returned to the normal growth track. Wang Xiang: The idea of high-end strategic quick wins is incorrect
The most popular news this week
China AVS3 video, audio standards rise! 8K/4K/ mobile for the first time
AMD ripper is finally not lonely! Intel Fever U returns to 56 core hard carry 64 core
The price of Xiaomi 13 to 4,500 yuan has sparked heated debate among netizens: Should you buy Xiaomi at more than 4,000 yuan
Thunder online game accelerator announced that it will be officially suspended on December 1
With the NIL technology, Canon wants to provide China with a lithography machine comparable to the EUV
Wechat iOS version 8.0.31 private test update: Added the function of dragging pictures and videos to send with one key
AMD Zen4 12 core price record low! The cumulative price drop is 20%
Priceless metal is thrown away: One million scrap mobile phones can recycle 68 kilograms of gold
The world's first 6GHz! Intel's "Ashes Edition" arrives early: You're out of the sky
SONY loosen up! PlayStation's multi-year super exclusive is coming to PC